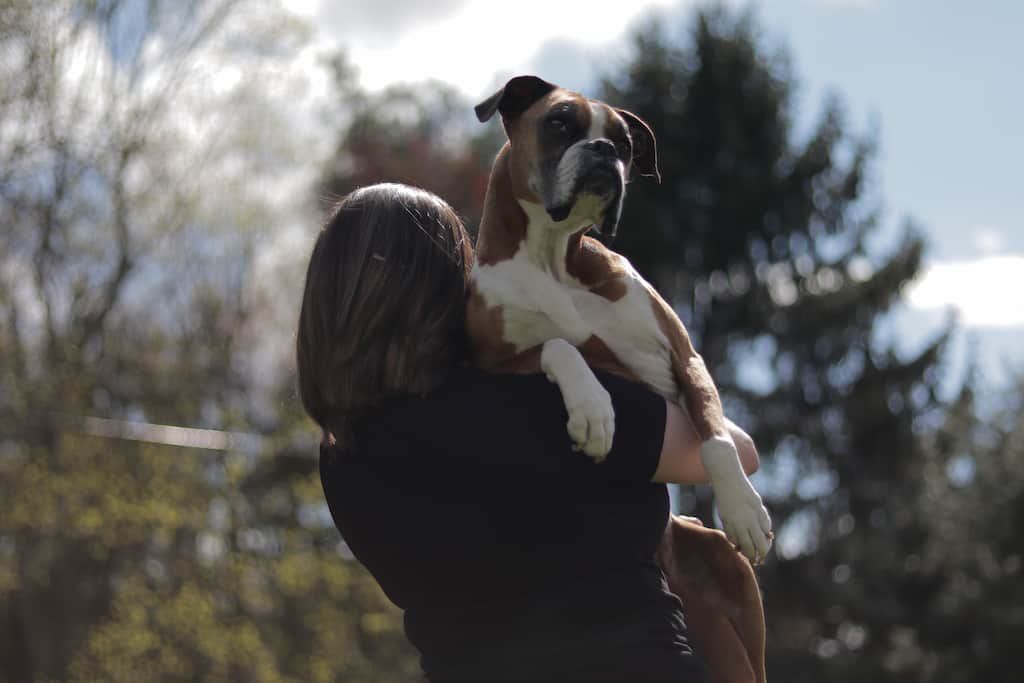 Boxers are among the most affectionate breeds you’re likely to encounter.

Despite their sometimes intimidating appearance, fearlessness and their history as guard and hunting dogs, Boxers make super cuddly companions.

Given the chance, they will end up squarely on top of you, living up to their reputation as 70-pound lap dogs.

If a Boxer likes you, you’ll be left in little doubt about it.

Boxers enjoy being close and are charmingly in-your-face about their affections.

This doesn’t mean your Boxer has to be all over you.

How an individual Boxer behaves has everything to do with how they’re raised and what kind of interactions the owner encourages.

Few people would object to a Boxer puppy in their lap, or giving them hugs …but not everyone wants a full-grown dog on top of them.

Don’t think that because Boxers like to cuddle, they must be allowed to do whatever they like.

Boxers can easily be taught to stay off furniture including couches, and to sleep in their own bed, if that’s what you prefer.

Make the rules and stick to them consistently.

Irrepressibly friendly or not, it’s important for your Boxer to know you are the pack leader and that what you say goes — including what’s deemed an acceptable way to show affection.

Young Boxers can have a tendency to get overexcited and it needs to be managed from the start.

Training a young Boxer not to jump up on people can be one of the more challenging aspects of Boxer ownership, but it is essential.

How To Stop A Boxer Jumping On People

The good news is adult Boxers are generally more aware of their own heft and naturally calmer.

Plus, you will have had more time to teach your Boxer impulse control.

Boxers will lavish you with affection but they are also strong willed, independent dogs that don’t ordinarily become clingy.

Good breeding will assure your puppy comes with a steady, balanced Boxer temperament that embodies all the best aspects of the breed.

A typical Boxer will be:

The Boxer Zoomies: Why Do They Happen?
The Boxer’s Distinguished History
Are Boxers Good Guard Dogs?

If there are any cons to the Boxer temperament it’s that they can also be:

Why You Should Not Get A Boxer: 12 Cons Of The Breed

Once your pup gets home, it’s over to you to shape him into a good canine citizen.

5 Things You Must Teach Your Boxer

A well-socialized Boxer can happily stay home alone for reasonable amounts of time, as long as he is trained to do so and eased into it gradually.

What It Might Mean If Your Boxer Becomes Suddenly Clingy

Like any change in your Boxer, if your Boxer becomes suddenly clingy it may be an indication that something is wrong.

If your Boxer begins following you around when he normally doesn’t, it might mean he is:

In the case of a female Boxer, sudden clinginess could be a sign that she is experiencing hormonal changes associated with her heat cycle.

Female Boxers that start to “nest”, cry or carry around a toy as though it were real may be going through a false pregnancy.

Otherwise, if your Boxer is eating and drinking normally and seems physically fine, it’s probably just a case of feeling a little out of sorts.

Boxers, like all dogs, may take time to adjust to changes in:

Is Your Boxer Scared Of Everything?

Note that neutering/spaying is known to negatively impact Boxer dog health and wellbeing in a multitude of ways, including behaviorally.

When Should I Neuter Or Spay My Boxer?

It depends what you mean by needy.

Do Boxers require lots of your time and attention?

Boxers are not “set and forget” dogs that you can leave out in the backyard.

Both physically and temperament-wise, Boxers are unsuited to being outside dogs.

Why A Boxer Can’t Live Outside

A Boxer is happiest in the heart of the family.

They are particularly fond of, and well suited to youngsters.

Boxers are well known for being gentle with, and protective of, children and babies.

A Boxer is not the breed for you if you work long hours and have little time to spend outdoors, playing and exercising.

This is a physically and mentally active breed.

A Boxer needs lots of attention, exercise and mental stimulation like learning tricks, practicing obedience or putting his phenomenal sense of smell to use with a bit of nose work.

5 Tricks To Teach Your Boxer

Failure to meet a Boxer’s needs in one of these respects is generally to blame when a Boxer develops a problem behavior such as:

Don’t overlook the importance of raw meaty bones as part of a fresh, natural canine diet.

The chance to rip and chew is very stress relieving for dogs — raw bones contribute enormously to a Boxer’s psychological satisfaction and wellbeing.

On the flip side, Boxers are wonderful dogs for those with active lifestyles that a dog can participate in.

Are you the kind of person whose life revolves around their dog?

How Boxer Dogs Show They Love You

Boxers are expert communicators with a range of quirky ways of expressing themselves.

Aside from climbing into your lap, you know your Boxer loves you if he:

Some might call it staring, Boxers call it communicating.

Mutual eye contact between dogs and humans is known to trigger the release, in both parties, of the “love” hormone, oxytocin.

Oxytocin is the hormone responsible for bonding between a mother and her baby.

Of course, your Boxer’s eye contact could also mean he’s attempting to read you and predict what you’re going to do next, or trying to tell you he wants something.

This a request for attention and a sure show of affection.

If you’ve taught your Boxer to “shake”, he may also be offering the behavior in an attempt to please.

Then again, he’ll just as readily park his jowls on a coffee table or anything else that happens to be the right height.

Physical contact is an expression of closeness and belonging.

It’s a sign your Boxer trusts you and draws comfort from being nearby.

Whether these positive qualities distort into unhealthy attachment like “velcro” dog syndrome and even disorders like separation anxiety has a lot to do with management.

Velcro dog syndrome refers to a dog being overly attached to and dependent upon their owner.

It’s sometimes seen in shelter dogs that have been abandoned in the past.

Sometimes owners can inadvertently encourage clinginess and velco tendencies by babying or “helicopter parenting” their Boxers rather than letting them be dogs.

While it might be flattering to think your Boxer can’t bear to be without you, your dog needs to be relaxed and comfortable when you’re not there.

If he’s distressed, you can expect it to come out as problem behaviors.

How To Socialize A Boxer Puppy

Do Boxers Bond With One Person?

However, they bond strongly to their owners and can be trained to disregard strangers if that’s what you prefer.

Some Boxers display a clear preference for men over women or vice versa.

Do Boxers Have A Favorite Person?

In families, it’s not unusual for Boxers to have a favorite person.

This can have more to do with the person than the dog.

Dog trainer and ex-Navy SEAL Mike Ritland, who wrote the book Team Dog: How to Train Your Dog–the Navy SEAL Way has a “Be the man” technique which basically involves adopting a commanding posture and body language and generally conducting yourself like a leader and someone worthy of your dog’s respect.

Boxers certainly respond to these cues and the human they like best may simply be the one that is knowingly or unknowingly behaving in this manner.

It may not be their owner, who dotes on them regardless, but someone else whose attention they have to earn.

Boxers are up-close-and-personal dogs that love to give and receive hugs.

A well-adjusted Boxer will be affectionate without being overly clingy.

Good breeding, socialization, training and house rules will help you put limits on your Boxer’s exuberance and make sure he expresses his affection in appropriate ways.