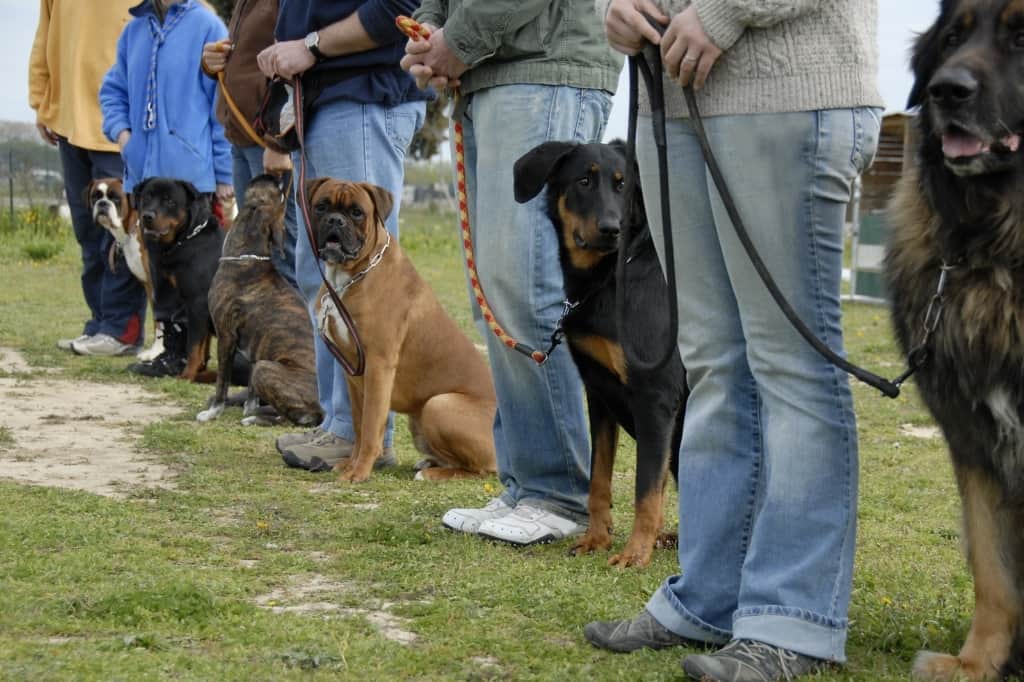 While Boxers aren’t necessarily easy-to-train dogs, it’s not through any lack of intelligence.

Your Boxer has the potential to excel at obedience tasks and can certainly learn to be a well-behaved member of the family.

Perhaps moreso than with less characterful dogs, training a Boxer is about finding methods that work for the breed, and for the individual.

When training a Boxer you will want to make learning fun through the use of games, and always use only positive reinforcement techniques.

Boxers were officially recognized as police dogs almost a century ago in Germany and served as military dogs in both world wars.

They also work as seeing eye dogs for the blind, search and rescue dogs, guard dogs and therapy dogs.

The diverse roles and responsibilities given to Boxers should tell you all you need to know about the trainability — and versatility — of the Boxer.

But you also need to see this:

Boxers have their own unique learning style.

If you don’t appreciate it, you might mistake a Boxer for the class clown, not much in the smarts department.

That would be to mightily underestimate the Boxer.

Boxers have plenty of character traits that make them highly trainable, including but not limited to:

In truth, many of those positive traits that make Boxers trainable also have flipsides that can make training challenging.

For instance, the Boxer’s alertness and interest in everything that moves can manifest as distractibility when you are trying to keep your dog focussed on you.

Playfulness, too, can produce high levels of engagement when you hit upon a game your Boxer loves … but it can also mean he flops himself down on the ground and throws his legs in the air — the Boxer equivalent of a tantrum — when you’re trying to get him to walk politely to heel like all the other dogs in your obedience class.

Or your Boxer might come when called with unbelievable gusto … except that it wasn’t you who yelled “Come!” … it was the owner beside you, instructing her own dog. Your Boxer was supposed to be sitting in a stay and waiting for YOUR go.

There are aspects of the Boxer temperament that out and out make them tricky to train, such as:

It’s sometimes said that Boxers from European lines tend to have more natural focus and training drive than American Boxers.

This is perhaps on account of the long tradition of Boxers as working dogs in Germany, versus Boxers as mostly companion animals and show dogs in the United States.

What It Takes To Train A Boxer

If your experience is with other breeds, you might find yourself at a loss when it comes to taming your Boxer’s wilder instincts.

Boxers are not Border Collies.

According to experienced Boxer trainer Karla Spitzer, author of The Everything Boxer Book, Boxers have a learning curve that can appear to flatline before spiking just when you’re about to give up.

Though classified in the working dog category by the American Kennel Club, Boxers learn differently to the sporting and herding breeds.

They often like to observe and to think first and, for all their bluster in certain scenarios, tend to be cautious — and even tentative — in their approach to unfamiliar situations.

Successful training of a Boxer requires an owner to be:

A group obedience class is a great idea for socializing a Boxer while teaching commands.

Make sure you select one that uses only positive reinforcement techniques.

Look for a trainer experienced with Boxers.

Pitfalls To Avoid When Training A Boxer

Do your research before signing your pup up for puppy school.

Don’t just go for the first program you come across because it’s offered by your local vets.

Many puppy schools amount to little more than a puppy free-for-all.

These kind of mosh-pit scenarios might be fun for owners and seem harmless at the time .. but this is not the kind of socialization you want to expose your Boxer to.

If this is how the sessions are run, it will be teaching your Boxer that other dogs mean GO CRAZY!

You will spend the next year trying to undo the bad behaviors your dog will pick up.

This kind of puppy school experience will be why your Boxer spots a dog from across the street and turns into a jumping lunatic, straining at the leash and threatening to run into traffic to get to the dog.

Far better to find a trainer who does things in a structured way.

Sure, you want your Boxer to get along with other dogs and have the chance to play.

But it’s important that your Boxer learn how to be calm around other dogs and how to be in proximity to them without having to interact.

Dog parks come with all the problems of a poorly-run puppy socialization class .. and then some.

If you go to an off-leash dog park and haven’t yet witnessed or been involved in a dog fight then it’s only a matter of time.

If your Boxer is attacked or menaced by other dogs as a pup (or anytime) this can have disastrous effects on his own behavior and sow the seeds of aggression once he’s an adult.

The lax supervision and wild play that can go on at dog parks is fraught with the risk of escalation to aggression.

Dog dynamics are complex and there is a lot that goes on beneath the level of human awareness.

Perhaps the greatest risk of all comes from the fact that dog parks are uncontrolled environments with constantly changing combinations of dogs including unknown dogs with potentially aggressive tendencies you have no way of knowing about until it’s too late.

A well-run daycare set up by professional dog behaviorists is a rare find.

Most facilities unfortunately combine the worst aspects of both puppy schools and off-leash dog parks, made riskier by the fact that owners are not present to witness what goes on, nor to intervene on behalf of their dogs.

Keep in mind that doggy daycare is a human invention that requires dogs to override their natural instincts.

It is not natural canine behavior for dogs to socialize with members of other packs.

Dogs in the wild live in tight family groups and are at pains to avoid interaction with dogs they don’t know.

For the domestic dog, the pack is the human household.

Those other pooches at daycare? They are from other packs.

Mixing packs carries an in-built risk of conflict with all the associated consequences for behavior, anxiety and reactivity.

7 Tips For How To Train Your Boxer

Training begins the day you bring home your new puppy or your adult adopted Boxer. You’ll be teaching your Boxer how to behave — even if it’s just by neglecting training and teaching him anything goes.

So you might as well be deliberate about it.

Pretty much every Boxer will understand what you mean and obey when he feels like it.

But your Boxer is not trained until he can deliver the desired behavior on cue, ALL of the time.

The often-overlooked final stage of teaching a behavior is proofing that behavior.

Proofing means practicing the command in increasingly difficult situations with more and more tempting distractions until you are certain your Boxer will obey NO MATTER WHAT.

This is when training becomes life saving.

A rock solid recall or “Come” command can be the difference between your dog being hit by a car or hurt in a dog fight and coming home safely.

Some dogs are food-motivated, and Boxers certainly will work for treats.

But, overwhelmingly, Boxers are motivated by FUN.

Pay attention to what your Boxer enjoys most and find ways to work that into your training as the reward.

Boxers are great improvisors and the best toys are usually the ones they find and appropriate themselves.

It’s better to do many stints of just a few minutes throughout the day, rather than one long training session all at once.

Always stop before your Boxer gets sick of it and starts to fail.

5. Be Gentle And Fair, Always

Never use harsh corrections or get angry with a Boxer.

For a start, it won’t work.

Boxers are attuned to injustice and shut down in response to anything but positive reinforcement and reward-based training.

If you scold or physically reprimand your Boxer it will only upset your dog and damage the relationship between you.

If you’re getting frustrated, end the session and come at it again when you’re feeling positive towards your dog.

It’s easy to fall into the trap of thinking your Boxer is trained by the time he reaches adulthood and knows the basic commands.

Your Boxer will benefit from constant refreshers to keep his skills sharp and his responses immediate.

Find interesting places to practice and keep adding new commands and tricks to keep you both entertained.

A side-benefit of training is that mental activity tires a dog out much faster than physical exercise.

As we all know, a tired Boxer is a well-behaved Boxer.

A Boxer that gets the chance to use his brain and continually learn is also a much happier, well-adjusted Boxer.

7. Don’t Be Afraid To Go Back To Square One

Life gets in the way.

It is never too late to admit you’ve dropped the ball and go back to basics.

There is no behavioral problem that is not solvable with the right approach.

If necessary, engage a professional trainer.

Don’t wait until things are so out of hand that your partner is threatening to rehome the dog.

Even without spending big bucks, there are plenty of good training resources online for you to access and put into action.

We are reader supported. As an Amazon Associate we earn a commission from qualifying purchases.

Helpful Tools For Training A Boxer

At a minimum, you are going to need:

Behaviors Your Boxer Puppy May Struggle To Learn

Your pup will probably need a lot of practice and effective instruction to learn:

Other behavioral issues commonly encountered by Boxer owners include:

Occasionally, when socialization has been less than adequate, owners find their Boxers can develop:

Things Your Boxer Will Learn Easily

On the upside, plenty of things come easily to Boxers.

Training is a critical part of being a Boxer owner.

The world opens to a well-trained Boxer, as he’ll be welcome in many more places and included in more of your life.

While it won’t always be easy — we well know a Boxer can have you in tears of frustration —  training your Boxer will strengthen the bond between you like nothing else can.