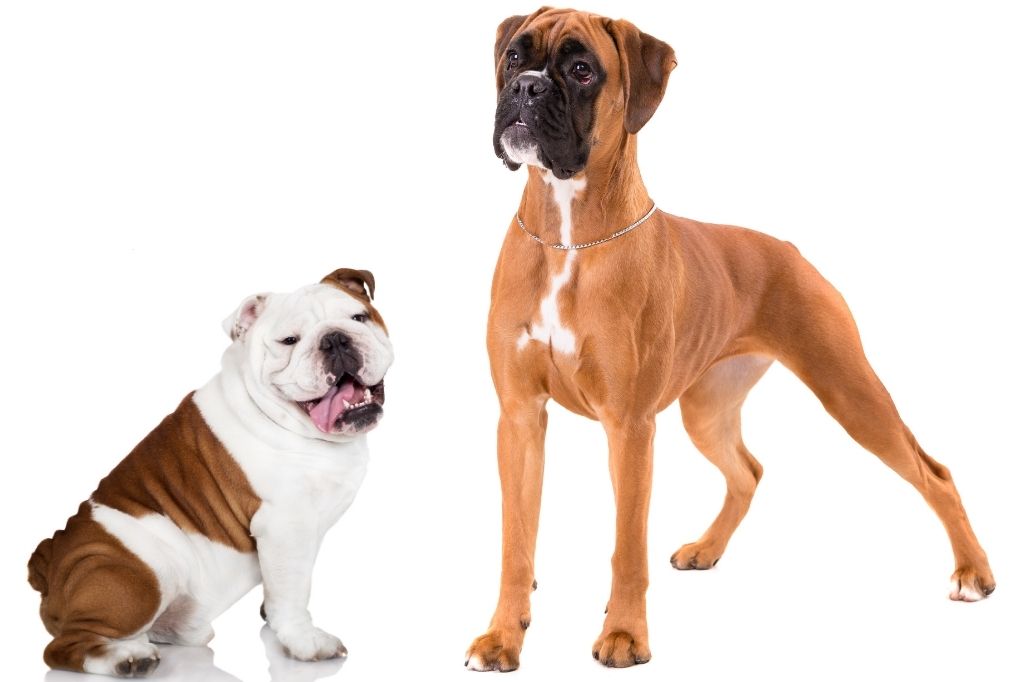 Lovers of the Boxer might wonder whether their dogs are from the same stock as that other squishy-faced, jowly breed, the Bulldog.

The Boxer and Bulldog breeds are related insofar as they share a common history.

Both were developed from the now-extinct Bullenbeisser breed, a Mastiff-type hunting dog also known as the German Bulldog.

Today, however, the two dogs bear little resemblance to one another, having diverged as distinct breeds more than a hundred years ago in Germany.

Boxer Dog Diaries is reader powered. I may receive a small commission, at no extra cost to you, if. You make a purchase via links I share. Thank you for your support.

Boxer devotee John Wagner addressed the association between Boxers and Bulldogs at length — and made little attempt to hide his strong distaste for the “grotesque” modern day Bulldog — in his definitive account of the Boxer breed, published in 1939.

The book was titled, simply, The Boxer and offers perhaps the most detailed history of the breed.

Much of this article is given over to Wagner’s inimitable words.

Boxers And Bulldogs: A Common Ancestor

The modern Boxer is not a Bulldog.

But, historically speaking, Boxers and Bulldogs are members of the same canine family, in that they share a common ancestor.

If you trace the modern Boxer and modern Bulldog lineages back to the late 19th century, the two breeds descended from the Bullenbeisser, which had been Germany’s only hunting hound throughout the Middle Ages.

The Boxer: An Old Breed With A Distinguished History

Both the Bulldog and the Boxer were bred as fighting dogs, pitted in the ring against bulls and bears in the bloodsport of bull or bear baiting that originated in England but then spread to continental Europe including Germany.

Incidentally, a persistent rumour that a Great Dane cross was used to develop the Boxer is not accurate according to The Boxer author John Wagner.

Bulldogs: The Origin Of The White Boxer?

The Bulldog has been credited (or blamed, depending on your perspective) for introducing the color white into the Boxer gene pool — but there is disagreement over the veracity of this claim.

According to John Wagner’s exhaustive investigation of the Boxer dog’s history in The Boxer, “The literature and paintings previous to 1830 indicated that all Bullenbeisser up to that time were fawn or brindle with black masks. There is never any mention of white.”

Then came, he says, a great influx of English dogs into Germany, including the English Bulldog of the day.

What followed were many crosses with the Bullenbeisser, after which the color white began to appear in Boxers.

However this version of events is disputed.

According to the American Boxer Club, responsible for setting the official breed standard in the United States, white Boxers existed long before the first crosses to a white English Bulldog in the 1890s.

The ABC cites as evidence a photograph of a white Boxer that was killed while serving alongside his master in the Franco-German War, which was fought in 1870-1871.

However it happened, white Boxers have played an important part in the breed’s history.

White Boxers were allowed to be registered and bred in Germany until 1925 but then banned because white was regarded as an unacceptable color for guard dogs, which is what Boxers primarily were at that stage.

Today, white Boxers remain disqualified in the United States, deemed as failing to conform to the breed standard, which dictates no more than a third of the body be white.

The reason given for this is the deafness (and sometimes blindness, although the frequency of this association is not documented) that can occur in white dogs.

For a moment in time around the early 1890s, Boxers and Bulldogs were both referred to as Bulldogs and were, at times, inter-bred.

But the Bulldog of the late nineteenth century was a very different specimen from the Bulldog we see today.

John Wagner was emphatic on this point.

He said at the time that Bulldogs crossed evolutionary paths with Boxers, they were “..square-built, high stationed little dogs compared with the modern breeders’ grotesque achievement..” which he describes as “cloddy, low-to-the-ground” dogs full of “unsound characteristics”.

Two English Bulldogs do appear in the early Boxer pedigrees, including one called Tom.

While Wagner regarded Tom as a positive influence on the Boxer, his genes helping to develop the classic boxer head, in the same breath he said it took “years of selective breeding to eliminate some undesirable traits” introduced from the Bulldog.

“If any of the more grotesque of the English dogs did creep into the Boxer family they played but a minor part in influencing the breed. This fact is definitely established by the early photographs fo the original breeding stock… Not one of them would ever be mistaken for an English bulldog. They were, however, distinctly similar to the early Boston Terrier and his next of kin, the American Pit Bull Terrier.”

The way Wagner told it, the original Boxer standard adopted in Germany in 1902 was written in part to “eliminate definitely the exaggerated English Bulldog type”.

“Today they have little in common. We Boxer breeders do not want the same kind of head, neck, body, limbs or tail. Ours must always be a balanced, able work-dog and never an exaggerated show-freak.”

Anything approaching a “coarse, Bulldog-like appearance” was considered a defect in the Boxer, including a “Bulldog bite” and a “Bulldoggy head”.

A Boxer’s bottom teeth should not be visible when the mouth is closed, nor should the tongue protrude.

The eye should not be pushed in under the forehead the way it is in the Bulldog.

It doesn’t seem a distortion of Wagner’s intent to say that the Boxer is an all-round handsomer, more elegant dog.

He did give some credit to the Bulldog though, when it comes to temperament.

Wagner said, “the (Boxer) breed as a whole is endowed with the identical sweetness and amenability to man that we find inherent in practically all of the so-called Bulldog root-stock line.”

The Boxer “.. has all the tolerance of the Bulldog but none of his indolence ..” combining the strength of the Bulldog with the agility of the Terrier.

Are Boxers A “Bully” Breed?

Looking even further back than the Bullenbeisser, Boxers are one of a great many breeds descended from the Molosser.

The Molosser is a strain of heavy-headed, short-muzzled dogs defined by powerful builds and great courage.

These dogs date as far back as the Assyrian race that lived from 2300 to 600 BC where they were used as war dogs.

The same dogs were still around in ancient Greece, guarding livestock and land.

These days, the Molosser descendants are known as the “bully” breeds.

The Molosser group encompasses not only breeds with the word “bull” in their name but dogs as diverse as the Saint Bernard, the Shar-Pei, the American Pitbull Terrier and the Pug, which is considered a mini-Molosser.

Molossers are usually large, heavy-boned dogs with massive heads and pendant ears, a relatively short muzzle and a muscled neck.

Boxers have leaner and curvier figures than most Molossers, but there is no doubting their membership of the group.

What Should An Ideal Boxer Look Like? The Boxer Breed Standard

Do Boxers And Bulldogs Get Along?

Boxers and Bulldogs can get along super well.

In favor of the pairing is the fact that Boxers tend to get along well with dogs smaller than themselves.

Are Boxers Good With Other Dogs?

Here are two playing beautifully together:

Of course, it depends on the individual dogs.

Energy-wise and in terms of physique, Bulldogs tend to struggle to keep up with high-energy Boxers.

As a result of their breeding, Bulldogs tend to experience breathing difficulties upon extended exertion, much moreso than Boxers.

If you are wondering about Boxers and Bulldogs because you’re thinking of sending your Boxer to a doggy daycare where there’s a Bulldog, worry less about the Bulldog and more about the setting in general.

Dog daycare can be problematic in many ways, and may not be a good idea for your Boxer.

With a little forethought, Boxers can be left home alone safely, and this may well be the better choice.

Modern Bulldogs and Boxers share a common ancestor in the now-extinct German hunting dog known as the Bullenbeisser.

The Bulldog of the late nineteenth century was in fact interbred with the Boxer for a time and is credited by some (although not the American Boxer Club) with contributing the color white to the Boxer bloodline.

However, in the more than a century since, the two breeds have taken decidedly different paths, the Boxer remaining an active, athletic breed compared to what the Bulldog has become.