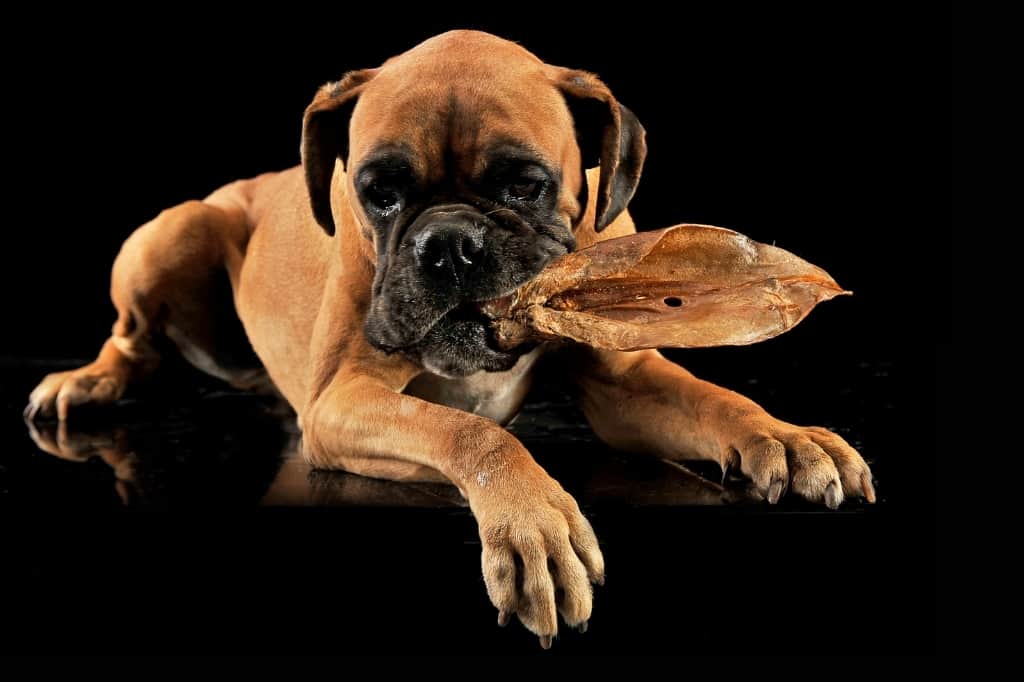 Chews are important as an outlet for your dog’s natural instinct to gnaw on things, and pig’s ears are stocked in most pet stores — but does that mean they’re a healthy choice?

Unfortunately, pig’s ears rival rawhide for the dubious distinction of being the worst chews you can give your Boxer dog.

From choking and intestinal obstructions to bacterial contamination, the risks associated with pig’s ears can be serious and even life threatening.

There are much safer and more nutritious alternatives that provide long lasting, natural treats for Boxers, including aggressive chewers.

Why Chewing Is Good For Your Boxer

Your Boxer needs to chew.

The benefits to chewing for carnivores are numerous, including:

However, it’s important to select an appropriate chew.

Just because something is marketed as a dog chew doesn’t mean it’s the right choice for your Boxer.

How To Stop Your Boxer Chewing Everything

Pig’s ears can cause problems for your Boxer in the form of:

If you’ve ever watched a dog eating you know that they don’t tend to chew their food well before swallowing.

We humans secrete digestive enzymes in our saliva and have teeth built for grinding up food.

For dogs, digestion begins in the stomach.

As carnivores, their teeth are designed to rip and tear meat into chunks that are swallowed as fast as possible.

Many of our dogs apply this same approach to processed chews like pig’s ears — and it gets them into trouble.

Pig’s ears can become lodged in the throat and cause choking.

You may not always be able to save your dog by reaching down his throat and pulling the obstruction out.

This means they can cause blockages even after they’ve reached the stomach.

Intestinal obstructions are life threatening and surgery to remove them is usually an emergency, and not always successful.

Why Rawhide Is Unsafe For Your Boxer

Sharp edges of pig’s ears can perforate the food pipe or the gut.

This can result in system-wide infections known as sepsis which can be fatal.

Salmonella, a type of bacterium, isn’t just a threat to the dogs eating pig’s ears, but to the humans interacting handling these treats, being licked by the dogs that’ve consumed them (including their saliva and feces) or touching surfaces the pig’s ears have been in contact with.

The most recent incident in 2019, involved 154 documented cases of human illness across 33 US states, involving pig’s ears from multiple different suppliers.

35 people, including 27 children younger than five, were hospitalized with salmonellosis linked to pig ear pet treats.

Several of the strains were antibiotic resistant, which makes treatment more difficult.

The Food and Drug Administration reported that the affected treats were sourced from Argentina, Brazil and Colombia.

This is far from the first time there’s been salmonella contamination of pig’s ears.

In 1999 the Canadian government issued a similar warning and recall, leading the FDA to warn American pet owners.

In 2000 US authorities intercepted dog chews manufactured by 20 different companies in 11 countries including China, New Zealand and Germany, due to suspected salmonella contamination.

A study published in the journal Zoonoses Public Health in 2008 sampled 245 pig ear treats purchased in Canada and found 4 per cent were contaminated with multi-drug resistant salmonella.

Salmonella can cause illness and death in people and animals.

Common symptoms of salmonella infection in people include diarrhea, fever and abdominal cramps.

Be sure to check the label and avoid products treated with coloring, flavoring or preservatives.

But be aware that some products can be legally labelled “all natural” and “preservative free” while still having used heavy duty chemicals in their processing and manufacture.

All animal products have to be processed or preserved in some way, to stop them rotting.

In the case of pig’s ears, they may have been treated with sodium hypochlorite (bleach) and/or cooked.

Cooking creates carcinogenic substances in meat, and cooked meat does not feature in a natural canine diet.

They may also have been sprayed with flavoring to make them more appetizing to your dog.

Signs of fat overconsumption can include itching and scooting (dragging the butt along the ground).

Many pig ear treats sold by US based companies are sourced from overseas suppliers.

These countries of origin may include China which has a questionable record on pet food safety, including the melamine crisis of 2007 where vegetable proteins imported from China were found to be contaminated with the chemical melamine, which is used to make plastic plates and utensils.

Lax oversight of the pet food industry was exposed by the documentary Pet Fooled.

Treats like pig’s ears can be even more inadequately regulated than kibble, as they’re not classified as “food”.

Labelling rules mean that just because a chew is promoted as “single ingredient” or “all natural”, doesn’t mean it contains no nasties.

According to the FDA, the term “all natural” has no legal or regulatory meaning.

It may just mean the final processor didn’t add any preservatives.

What happened earlier in the manufacture, you have no way of knowing.

Rawhide, for instance, can be legally sold as “100% cowhide”, with no mention of the formaldehyde or the titanium dioxide chemicals that have been applied to preserve and whiten the product.

Other Chews Not Good For Your Boxer

Hooves, often stuffed with a dried mince, can unfortunately cause broken teeth.

They can also splinter, creating sharp edges and shards that can cut or get stuck in the soft tissues of the mouth and gums.

The same problems of indigestibility, chemical treatment and artificial ingredients can affect other pork products sold as chews.

Keep in mind most of these body parts are sold not with your dog’s health in mind, but in order to turn a profit from otherwise unusable parts of the animal.

These are the latest trend in dog chews but are exceedingly hard.

Besides the prospect of chipped or broken teeth, many dogs find antlers wholly uninteresting.

Here are the short answers to some common queries about pig ears.

Are Pig Ears Digestible For Dogs?

Hence the risk of intestinal obstruction.

The more often your Boxer consumes a risky treat, the greater the chances you’ll encounter a problem.

You may have fed pig’s ears in the past without observing adverse effects, but that is no guarantee your luck will last.

Undigested material can also accumulate in the alimentary canal, so the more you feed, the greater the odds of blockage.

Are Cow Ears Better Than Pig Ears For Boxer Dogs?

While sold as “natural” pet treats, cow’s ears are generally from mass produced animals and, as a result, can come loaded with hormones.

The back side of the ear is a common site for steroid hormone implants given to livestock.

These implants are not removed but are designed to dissolve slowly under the skin.

According to veterinarians including Dr Jean Dodds and Dr Karen Becker, dogs eating ears from animals that have received implants may be consuming concentrated hormone residues, which can damage their health.

Hormone free pig’s ears from organically farmed, free range animals will be clearly labelled as such, and will be significantly more expensive.

Can Pig Ears Cause Blockage In Dogs?

Due to their indigestibility, pig’s ears can get stuck in your dog’s intestinal tract, anywhere from his esophagus to his bowels.

Are Pig Ears Better Than Rawhide For Boxer Dogs?

Pig ears are perhaps marginally less dangerous than rawhide for dogs because they contain fewer toxins than rawhide, which is heavily chemically treated as part of its processing.

But pig’s ears still come with many other downsides. Particularly worrisome are those risks associated with their indigestibility.

Are Pig Ear Treats Really Pig Ears? What Are Pig Ear Dog Treats Made Of?

Most pig’s ears are actual pig ears that have been baked or smoked.

However some products sold as “pig ears” are other ingredients that have been pressed into a mold shaped like an ear.

When Pig Ears Are Okay For Dogs

The one exception to the rule about pig’s ears is if they are raw.

You may be able to source frozen raw pig ears from some raw dog food suppliers.

These could be worth a go if you’re determined to give your dog an ear.

Safe Alternatives To Pig’s Ears For Your Boxer

There is no need to feed your dog risky chews like pig ears.

Forget processed products sold at the pet store and head for the butcher, or the meat aisle of your supermarket.

The absolute best chew you can give your Boxer is a raw meaty bone.

Bones are nature’s toothbrush for dogs and a nutritional powerhouse.

Your Boxer’s delight at receiving one will be obvious and he’ll know exactly what to do with it.

Note that cooked bones should never be given to dogs as they are sharp, brittle, indigestible and devoid of bioavailable nutrition.

Raw bone, however, is soft and highly digestible by the very acidic canine stomach.

It is normal for a dog to occasionally throw back up any small pieces of bone that haven’t fully broken down.

Be sure to avoid weight bearing bones like those typically sold as “soup bones”.

While often marketed at dog owners, these bones are harder on teeth, and fatty.

A much better option for a Boxer is a whole lamb neck, with the outer fat sheath cut off.

This bone is soft and comes from a young animal, so has less accumulation of toxins.

A recreational bone should be given once or twice a week at a minimum, in addition to the wholly edible bones that form part of every meal when you raw feed your Boxer.

How To Feed Bones To Your Boxer

Dried chews are often fed out of convenience and because they’re less messy than fresh raw meaty bones.

Even if you live in an apartment, bones can be fed indoors on mats with waterproof coverings like the Furpezoo Outdoor Dog Bed.

Just strip the cover and throw it in the washing machine afterwards or scrub it down with a brush to remove the grease.

A towel can also be washed with relative ease.

The benefits to your dog’s health and wellbeing are well worth the extra effort.

Bully sticks or pizzles, which are dried beef penises, may be a safer option than other dried chews, depending on how they have been manufactured.

Do a bit of research.

Were chemicals involved in their processing?

How are they preserved?

Were they dyed or flavored at all?

Some bully sticks are treated with bleach.

Tips For To Safely Give Chews To Your Dog

Regardless of what kind of chew you give your Boxer, you should always:

Alternatives To Chews For Your Boxer

If you’re looking to use food to amuse your Boxer, alongside raw meaty bones there are a couple of other safe alternatives to chews:

All of these can be filled with healthy, whole food treats.

Conclusion: Are Pig’s Ears Good Or Bad For Dogs?

Pig’s ears are not something your Boxer needs in his life.

The risks of choking, obstruction, artificial flavorings, chemical treatment and bacterial contamination rule them out as a safe, healthy chew.

Opt instead for a dog’s natural chew: raw meaty bones, and plenty of them!