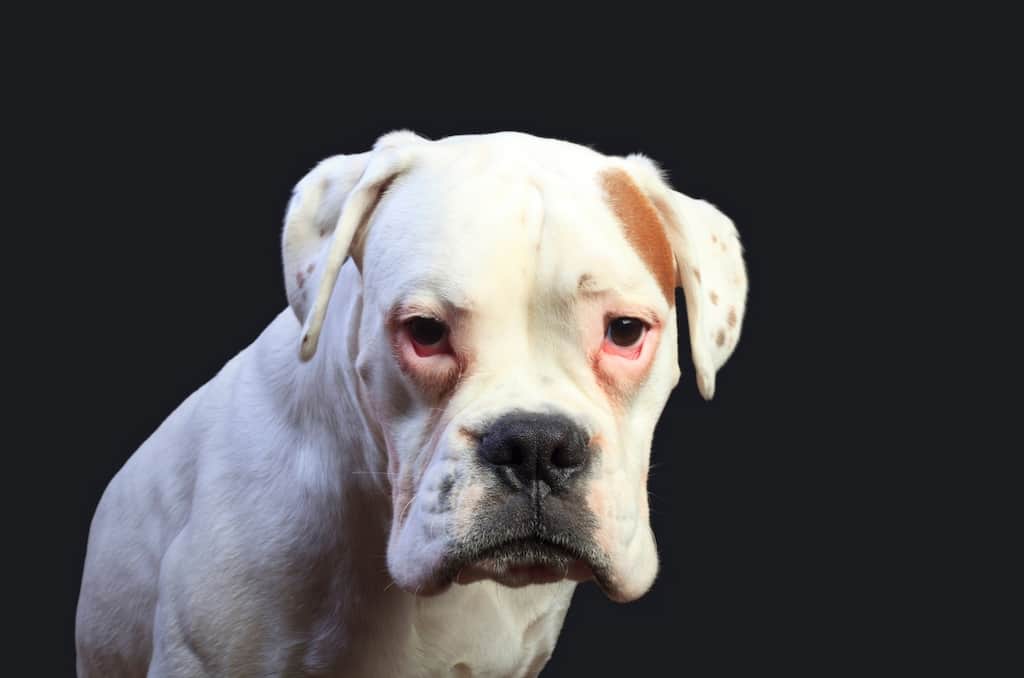 A misconception abounds that white Boxers have more health problems than other Boxers.

There is no clinical evidence to support this.

White Boxers are no more prone to health problems than their fawn or brindle-colored littermates.

This was never done on account of health problems, though.

It was done because white Boxers didn’t (and still don’t) conform to the current breed standard, which states a dog must have no more than a third of its body covered in white markings.

This is a touch curious, because the original Boxer standard, written in Germany in 1902, states that “Color is of least importance, even if the basic color is white.”

In fact, every white Boxer is genetically either brindle or fawn underneath. It’s just that he has outsize white markings — sometimes so outsize that they cover his whole body.

The color of the dog’s patches reveals whether his genes are fawn or brindle.

I am not a vet. This post is for general informational and educational purposes only. I encourage readers to see my full disclaimer here. Boxer Dog Diaries is reader supporters. I may receive a small commission if you buy via links I share.

Why Is My White Boxer Dog Sickly?

If your white Boxer is unwell, his coat color likely has nothing to do with it.

See also: What Diseases Are Boxers Prone To?

Far bigger determinants of a Boxer’s health are whether he:

The great news is that (with the exception of neutering if you’ve adopted a rescue), all of these variables are within your control as an owner.

How To Raw Feed A Boxer
Health Effects Of Spay/Neutering

What Percentage Of White Boxers Are Deaf?

Deafness in Boxers has the same genetic basis as deafness in Dalmatians. It is caused by an absence of pigment in the inner ear, hence its association with the white color.

5 to 8 per cent of white Boxers will be completely deaf.

As many as 13 per cent are deaf in one ear, something that generally goes completely unnoticed by owners.

How Do I Tell If My White Boxer Is Deaf?

So if you’re inspecting the litter at about that age, and taking your pup home at 8 weeks or older, you will likely know before you bring him home whether your white Boxer is deaf or not.

A white Boxer that can hear at this age has no higher chance than any other dog of going deaf later in life.

A deaf white Boxer puppy will display a lack of response to noise stimuli.

Keeping a non-hearing dog safe does involve special management but they can be effectively trained using hand gestures and other techniques.

How To Train A Deaf Boxer

White Boxers still have pigment in the form of spots and patches, often dark rims around their eyes and they generally have dark brown eyes.

Albinism, in animals and humans, is defined by a total absence of pigment. Albinos have telltale pink eyes.

Even white Boxers with blue eyes are not albinos as they will have color elsewhere on their bodies.

Why Does My White Boxer Have Black Spots?

People do tend to react with surprise to a white Boxer.

Perhaps we’re less used to seeing them because of the way they used to be killed at birth.

If your white Boxer is itchy, has tear stains or has received a diagnosis of “allergies”, first of all consider what you are feeding.

Then consider your dog’s exposure to toxins, chemicals or other irritants, whether in household cleaners, lawn care chemicals or internal pesticides like wormers or flea and tick treatments, to name a few.

Are You Overwashing Your Boxer?
Boxer Dog “Allergies”: Causes And How To Fix
How To Fix Tear Stains In White Boxers

Dispelling Other Myths About White Boxers

White Boxers are not:

As any owner will tell you, white Boxers have all the same endearing qualities as their fawn and brindle littermates.

White Boxers, like fair skinned people, can be more prone to sunburn.

Sunscreen is not necessarily the best option as the pink parts of a Boxer’s body are usually right around the eyes and on the muzzle, places where sunscreen will either get in the eyes or be licked right off and ingested.

Monitor a white Boxer’s sun exposure. Avoid leaving white Boxers out in the midday sun and consider walking them early or late in the day.

This is a good rule of thumb for most Boxers in any case, given their susceptibility to heat stress.

If your white Boxers loves lying in the sunny patch of the living room floor, it should be just fine.

Chances are the sun will move off him before long.

However, keep an eye on it and move your dog out of the sun or pull the drapes to prevent prolonged exposure.

If your Boxer has exceedingly sparse hair, to the point that his skin is visible through his fur, you might want to consider a sun shirt.

There are hats and visors for dogs but most are pretty impractical and your Boxer will probably ditch them quick smart.

What Is The Life Expectancy Of A White Boxer Dog?

Same as any Boxer.

Many owners of Boxers (white and colored) experience their dogs as having heartbreakingly short lifespans.

However, before you despair, it’s worth noting that many of these same dogs are fed highly processed kibble or canned diets and exposed to multiple toxins and other risk factors for disease, like those mentioned above (chemical wormers, neutering etc).

There is a lot you can do to give your Boxer a shot at a long, healthy life.

Some lines of Boxers appear to be longer lived than others.

There are claims, for instance, that European Boxers are more robust and live longer than Boxers with American heritage.

It is worth talking to breeders and investigating the longevity of different lines before falling in love with the first puppy you see.

Backyard breeders often do not test for health conditions known to occur in Boxers including heart conditions.

By the same token, some question the usefulness of the tests in predicting actual manifestation of disease.

Because of the more limited gene pool necessarily involved in producing dogs that consistently look the same, any purebred dog is thought to have more likelihood of health problems than any mixed breed dog —  all other things being equal.

This phenomenon is known as “hybrid vigor”.

It’s an argument for adopting a Boxer cross instead of having your heart set only on a purebred Boxer puppy.

A temporary uptick in shedding can be part of a detox process after improving a dog’s diet or after discontinuing a course of medication.

White Boxers have a single, tight-fitting coat and are low maintenance. You will never need to send your Boxer to the groomer’s to keep him looking good.

But, don’t be fooled into thinking this makes them hypoallergenic or low shedding dogs. Boxers shed a moderate to high amount of hair, year round.

Shedding in Boxers can be managed with weekly brushing with a soft rubber mitt, which also has the advantage of removing dander, stimulating the skin and massaging the lymphatics.

Breeding a white Boxer is generally frowned upon.

The prevailing view is that breeding a white Boxer will not contribute to the betterment of the breed, since all-white dogs are regarded as failing to meet the American Boxer Club standard, and because of the association of white with deafness.

However, white is a valued part of the Boxer gene pool, responsible for the attractive white blazes on the heads and white collars on the chests of “flashy” brindle and fawn Boxers.

Some breeders believe that, done right, white Boxers ought to have a place in responsible breeding programs where they can be carefully matched to compatible mates and successfully used to produce flashy offspring.

According to the author of The Boxer, John Wagner, the white color was introduced into the Boxer bloodline when the Boxer’s ancestor, the now-extinct German Bullbeisser, was crossed with an English bulldog.

The American Boxer Club says that’s not accurate, and the color white existed in Boxers before the first crosses to a white English Bulldog in 1890.

The ABC cites as proof a photograph of a white Boxer dog that died fighting alongside his master in the Franco-German War of 1870-71.

One theory about how white came to be frowned upon as a color in Boxers is that white was not a great shade for a war dog trying to move undetected on the battlefield.

According to the ABC, that’s close but not quite right: white was banned by the German Boxer Club in 1925 because it wasn’t regarded as an acceptable color for guard dogs, which was what Boxers primarily were at that point.

The American Boxer Club disqualifies white Boxers and bans them from breeding programs, it says, because of the association of the color white with deafness, and sometimes blindness, although this latter defect is exceedingly rare in Boxers.

Should You Breed Your Boxer?
Boxer Dog History
Are Boxers And Bulldogs Related?

On the upside, light-coated dogs like white Boxers attract fewer mosquitoes (which minimizes their chance of catching heartworm, which is transmitted by the bite of an infected mosquito).

White Boxers also have transparent nails, which are far easier to trim than black or brown nails, because you can see exactly where the quick is.

Final Thoughts On The Health Of White Boxer Dogs

You will sometimes pay less for a white Boxer puppy, because breeders regard them as less desirable. They are not eligible for the conformation show ring, for instance.

You can obtain a limited registration for a white Boxer with the American Kennel Club and white Boxers can participate in agility and obedience just like any other Boxer.

Much more important than color in choosing your Boxer is health, and temperament. Most important of all: do you feel a connection with this specific dog?

Do Boxers Have Good Noses?