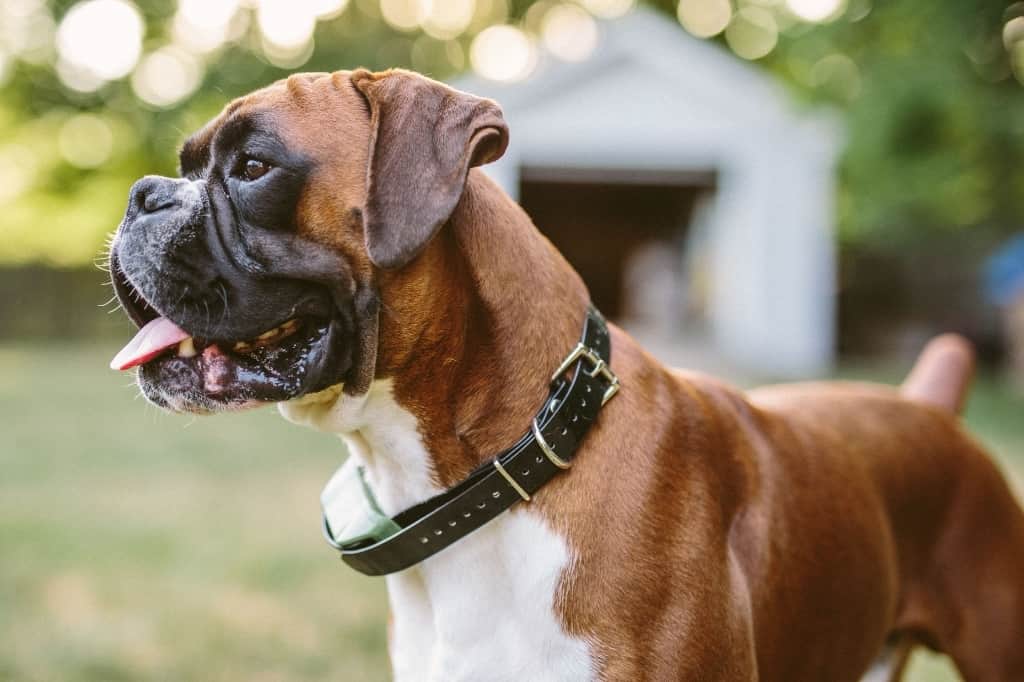 Boxers do best with collars that are:

For Boxers that are pulling on the leash or engaging in nuisance barking, you might be tempted to resort to training collars.

Boxer Dog Diaries is reader powered. I may receive a small commission, at no extra cost to you, if you make a purchase via links I share. Thank you for your support.

Far from being short cuts to good behavior, aversive collars can create new behavior issues and anxieties in a Boxer.

And they usually don’t work as well as reward-based training like clicker training.

“Click!” Is This The Missing Link In Your Boxer’s Training?

Go for collars made out of soft, supple and ideally natural material that won’t chafe or cause irritation.

Canvas or cotton are good options, something like the Carhartt Tradesman Collar

or the RUFFWEAR Crag Dog Collar in Seafoam.

Boxers’ ultra short, tight-fitting coats offer very little padding between the collar and the skin, which can be quite delicate.

Keep an eye out for any redness caused by the collar rubbing.

We especially like the new Comfort Microfiber Collar from Dogline which is receiving great reviews for being genuinely gentle on the neck.

A good one for white Boxers or those with super sensitive skin.

Be aware that collars, and their tags, can easily get accidentally hitched and strangle an unattended Boxer.

There have been cases of dogs being injured and dying after their collars became caught in:

Boxers will panic if they become caught, further twisting and tightening the noose around their neck.

Always take off your Boxer’s collar when he’s at home, particularly when he’s home alone.

This goes for both inside the house and when securely contained in the back yard.

You can lessen the risk somewhat by avoiding tags altogether.

One alternative is a personalized embroidered collar with identification details stitched into the fabric.

Slip chains have largely gone out of favor because of the damage they can do to dogs.

According to People for the Ethical Treatment of Animals, chokers should never be used.

PETA says choke collars have been associated with injuries including:

Even used properly, chokers are a harsher method than you want to use for a Boxer, as they do involve a level of physical punishment.

The big downside of choker chains is right there in the name — they work by constricting around the neck when the dog pulls, or when you give a correction.

The idea is that this tightening on the neck provides an aversive stimulus that the dog dislikes enough to stop pulling.

If using a choker chain, make sure that the chain runs from the point of connection with the leash around the back of the neck first, not directly under the throat.

This at least avoids the pressure being applied directly to the throat.

Prong collars are a step further down the punitive route.

Made of a series of interconnected metal spikes, they look like instruments of torture.

When the dog pulls they don’t just tighten on the neck, they poke into the flesh.

These collars are objectionable enough that PETA (People For The Ethical Treatment of Animals) has put out a statement opposing their use.

The metal spikes of prong collars pinch the skin around dogs’ necks when they pull and can scratch or puncture them.

Over time, this can cause dogs to develop scar tissue (which has no feeling) and/or build up a tolerance to the painful pinching sensation and thus continue to pull, making walks even more difficult.

Dogs may interpret the tightening of a choke or prong collar around their neck as a stranglehold (which it is, after all!) and become fearful or even aggressive.

Martingale collars are a cross between an ordinary collar and a choke chain.

Most of the collar is normal, a fabric band.

But a section of it is made from chain, or sometimes a tightening strip of fabric, so that when the dog pulls, the collar cinches unpleasantly on the neck.

They are gentler than a full choker because the section around the throat is not chain but fabric … but they’re still not ideal.

These are not necessarily as bad as they sound, but certainly not the most suitable approach for a Boxer.

Sometimes called anti-barking collars or electronic collars, these devices deliver an electric shock to your dog’s neck when he barks.

The American Society for the Prevention of Cruelty to Animals considers anti-bark collars punishment devices.

The ASPCA warns that most dogs become “collar-wise”, refraining from barking while collared but reverting to the behavior at other times.

This is because anti-bark collars punish your dog but don’t help him learn an alternate behavior.

According to the BCSPCA, British Columbia’s animal cruelty watchdog, the shock can cause psychological distress including phobias and high levels of stress and can even cause unhealthy increases in heart rate and burns to the skin.

The BCSPCA says, “Use of shock collars can habituate your pet to pain and cause increases in aggression and fear-based behaviors.

In sensitive dogs like Boxers, punishment tends be a particularly counterproductive way to train and can cause agitation and exacerbate anxiety.

A better alternative is a “no shock” bark collar like the PetSafe Bark Control collar that uses a vibrate function only.

But you will have much more success with reward-based training that creates an incentive for your Boxer to perform the desired behavior.

Nuisance barking is rare in Boxers and usually caused by not enough exercise or mental stimulation.

How To Stop A Boxer Barking

The best collar for a Boxer may be no collar at all.

Body harnesses avoid exerting force on the neck, which can be considerable given how hard some Boxers pull.

A front-attaching harness like the RUFFWEAR Front Range Harness can give you a lot more control as you’re working on teaching your Boxer to loose-leash walk.

Tags with identification details can be just as easily attached to a harness as a collar.

The latest technology is now available in the form of an Apple AirTag, which you can attach to your Boxer’s collar in a tailor-made protective case.

Head harnesses like the Gentle Leader are sometimes used for extreme pullers.

However, an improperly fitted head harness can do your Boxer a lot of damage.

Make sure you follow the directions carefully or get help putting the head harness on for the first time and adjusting its fit.

If you’re considering a head harness, make sure the design of your particular brand sits right on a Boxer’s short muzzle.

Glow In The Dark Dog Collars

If you and your Boxer walk at night there are a range of options including:

Best Clothes For Boxers: Our Top Picks For 2021

The best collar for your Boxer is a soft, fabric collar that comes off when he’s at home, so as to avoid snagging on things.

Consider a head harness only if you know how to correctly fit and use it, otherwise you can injure your dog.

In fact, the safest and most effective collar for your Boxer may well be … a front-attaching chest harness.

What are the dangers of using choke and prong collars? PETA

5 Reasons not to use a shock collar, BCSPCA

How To Choose The Best Bowl For A Boxer

Why Are My Boxer’s Eyes Red?