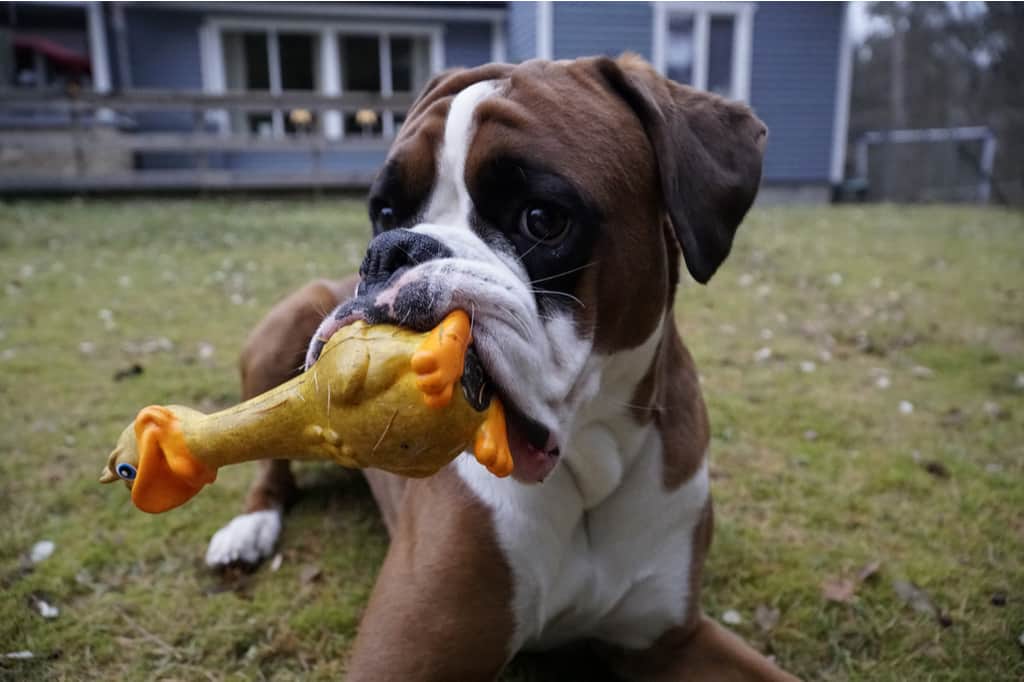 Tennis ball? Pffft. You have a Boxer on your hands, not a Border Collie!

The best toys for Boxers are those that appeal to their natural instincts — particularly the urges to sniff and to chase — and those that arouse the breed’s sense of fun.

As much as Boxers love to run and jump, your dog will stay entertained longer if a toy engages his mind.

Boxers are thinkers as well as athletes.

They have particular preferences and play styles that are consistent between dogs and often distinct from other breeds.

Here’s our tried and tested list of top 10 toys that Boxers typically go nuts for.

Boxer Dog Diaries is reader powered. I may receive a small commission, at no extra cost to you, if you make a purchase via links I share. Thank you for your support. I am not a vet. I encourage readers to view my full disclaimer.

You won’t find it in the pet store, but a giant exercise ball is a sure-fire way to keep your Boxer dog entertained.

Go for one like the DYNAPRO Exercise Ball which is extra thick and designed to be anti-burst.

You’ll want a fenced area too, for safety.

Then sit back and enjoy the mayhem!

Always ensure adequate breaks and if your Boxer ever displays signs of overstimulation and obsessive behavior with a toy, keep sessions short.

Be particularly careful to avoid overheating when it’s hot and humid.

Pro tip: if you want to make double sure the fit ball doesn’t burst — go for a covered ball designed for indoors, like the Vivora Luno Exercise Ball Chair with Canvas Cover.

The cover gets weathered, for sure (read: dirty!) but it does increase the ball’s longevity, protecting it from rocks and anything else sharp it might hit.

When it comes to toys that are good for Boxers, the Wobble Wag Giggle Ball, As Seen On TV is hard to beat.

With its unpredictable, jerking roll and it’s quirky noises that sound like a martian’s trapped inside, it’s right up a Boxer’s alley.

Just make sure you replace the ball once it becomes chewed to the point of sharp edges or pieces of plastic that may break off and be swallowed.

Rather than hard plastic frisbees, opt for a soft disc like the Hyperflite K-10 Pup SofFlite Dog Disc

When throwing the frisbee, be sure to do it in such a way that your dog jumps low and long, rather than performing acrobatic leaps high in the air.

While it might look impressive, these kind of jumps are much more likely to injure your dog’s joints when he lands.

Your dog may not seem hurt at the time, but later in life he can pay the price with joint problems and mobility issues.

This is why agility clubs don’t usually accept young pups into their programs.

It’s a good idea to avoid jumping games until your Boxer is finished growing.

Boxers are slow maturing dogs and their bodies are not done developing until later than we often assume — around two (and even three) years of age.

It’s important that the toys you buy for your Boxer exercise his mind as well as his body.

Puzzles like the Nina Ottosson Dog Brick Interactive Treat Puzzle are top of the line in this department.

Snuffle mats are another way to get your dog thinking and using his senses to problem solve.

Sniffing out treats is a task that will absorb and relax your dog — a great toy to leave out when you need to leave your Boxer home alone.

to deluxe models such as the Vehipa Feeding Mat or the Piggy Poo and Crew Rooting Snuffle Mat.

This is definitely in the realm of next-level dog toys.

The great thing about an agility course is that it hinges on interaction and effective communication between you and your dog as you direct him through the obstacles.

If the budget doesn’t stretch that far, there’s the Outward Hound ZipZoom which can be set up indoors or try the Adjustable 6 Pole Agility Weave Pole Set with Carrying Case and Grass Stakes.

Tugging is great for building engagement — and uses just about every muscle in your dog’s body.

Go for something easy on the mouth like the REDLINE K-9 Sheepskin Agility Tug.

Alternatively, try the Leather Puppy Bite Rag which is made from real, soft leather.

Prey drive is the innate instinct to chase and catch fast moving objects.

With their heritage as a hunting dog, Boxers certainly have this tendency.

The Prey Drive Building Flirt Pole will provide an outlet for your dog’s natural behaviors without wearing you out.

Or check out the Outward Hound Tail Teaser.

Aside from the fact that vets pull them from the stomachs of dogs far too often, they aren’t nearly as much fun as a ball you can swing around.

Try the Starmark Swing ‘n Fling which floats, making it perfect for the beach.

There’s also the Rubber Chicken Made From Natural Rubber (Latex) Lead-Free Chemical-Free Complies to Same Safety Standards as Children’s Toys which Boxers enjoy getting a honk out of.

If your dog loves tugging and doesn’t mind playing on his own, he might like the LOOBANI Dog Outdoor Bungee Hanging Toy which you can affix to a tree in the backyard.

Note: this is one exception I would make to the rule below about not giving your Boxer free access to toys, so they hold their value and are connected to bonding with you.

How To Play With A Boxer Dog And Toys

Toys can be heaps of fun, but only if there’s an engaged owner on the other end.

The novelty value of a new toy (and novelty counts for a LOT with Boxers) will quickly fade if it’s left out after the play session is over.

This is how you end up with a pile of toys your dog no longer cares about.

Keep in mind that what your Boxer craves most is interaction with YOU.

One tip for keeping a Boxer interested in his toys is to put them away, out of your dog’s reach when you’re done.

Rather than giving your dog free access, make it so the only time your dog gets to play with any toy is when you’re involved.

And don’t bring out every toy every time.

This way he’s much more likely to remain interested in each toy.

Plus, there’s the added advantage that your dog learns to associate the fun with you, rather than with an object.

How Not To Play With Your Boxer And Toys

They may well fetch a toy, but what happens next is likely to be somewhat less predictable.

Boxers have a tendency to run away with objects, hoping to be chased.

Though it’s quite amusing at first, this can be a milder form of resource guarding, which you want to discourage.

A bigger problem is that chasing your dog makes eluding capture a game, which can undermine your training of a strong “Come” command.

Never run after your Boxer, no matter how much he wants you to.

In order to keep him safe, you want to condition your dog to automatically run towards you, rather than away.

Teach the “Bring it” command, by rewarding your dog for returning toys to you.

A game of tug after your dog performs a successful fetch can serve as an incentive.

For more mistakes to avoid when it comes to your Boxer and toys, check out our…

Top 10 Worst Toys For A Boxer

By choosing toys that are good for Boxers, and managing them carefully, you can enhance the quality of your playtime with your dog.

You don’t actually have to spend lots of money at the pet store to keep your Boxer entertained.

You can make your own versions of many of these toys.

Sometimes the best toys are not store-bought at all, but improvised.

Boxers love found objects and will often turn the most mundane household objects into playthings.

You’ll want to instill reliable “Leave it” and “Give” commands, so that you can intervene if your dog chooses something inappropriate.