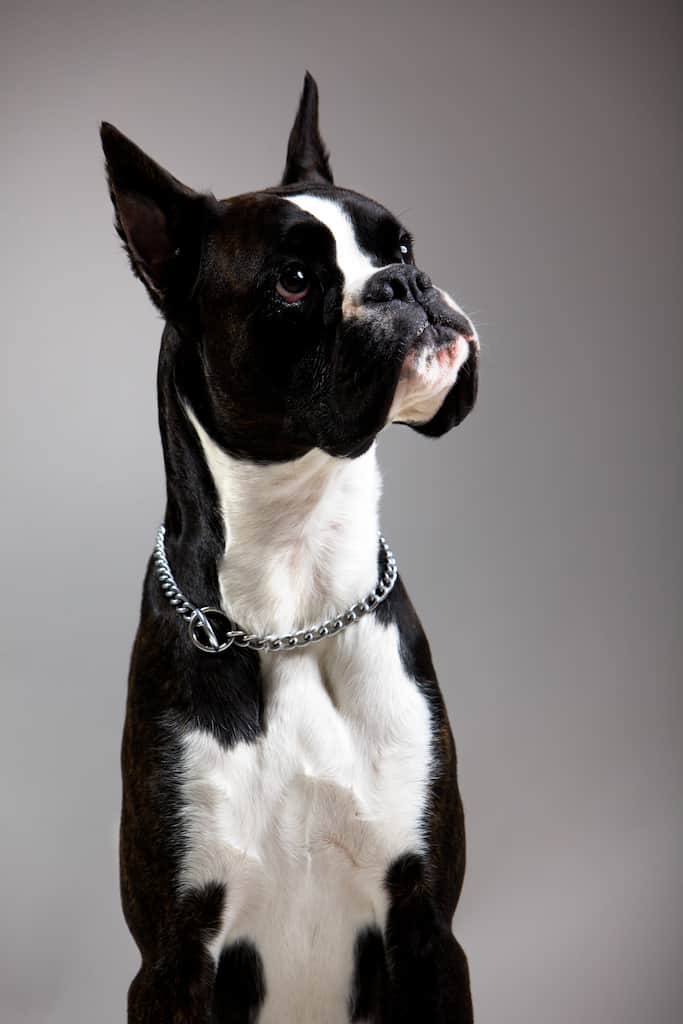 So called “black” Boxer dogs are highly sought after by some owners and sometimes advertised as a rare kind of Boxer. Technically, though, black Boxers don’t exist.

Solid black Boxers are a genetic impossibility, because the Boxer breed does not carry the gene for black coat color. If you see a Boxer that looks to be pure black, it’s either:

Brindle is one of the two recognized colors for a Boxer dog.

In Boxers, brindle means fawn with black stripes. When the striping on a brindle Boxer is so concentrated as to overwhelm the fawn, the dog can appear black — particularly when it’s a puppy.

According to the American Boxer Club:

“These dogs may be termed ‘reverse’, ‘seal’ or ‘black brindles’ but responsible breeders will never try to pass them off as black. Nor will they use the term ‘sealed’, implying the fawn color is sealed out of the black.”

I am not a vet. This post is for informational and general educational purposes. I encourage readers to view my full disclaimer. Boxer Dog Diaries is reader supported. I may receive a small commission if you buy via links I share.

Has There Ever Been A Black Boxer?

Yes. Sort of. Well, not really.

At one point in the Boxer’s history, a handful of solid black dogs appeared.

However, these dogs were actually descendants of an accidental Schnauzer-Bulldog cross.

Of course, all of the dog breeds we know and love today were developed by cross breeding dogs to produce desired traits, both behavioral and aesthetic.

So black coat color could be introduced to the Boxer in this manner.

It’s how the bobtail was brought into the breed by a British breeder in the 1990s by mating a Boxer with a Corgi and then crossing the progeny back with Boxers.

Boxer Dog History
When Boxer Met Corgi: How The Bobtail Boxer Was Born

But the record says it didn’t happen with coat color.

Back in the 1900s, the inadvertently black dogs were never used in official Boxer breeding programs and so the black coat color was immediately eliminated from the Boxer gene pool.

The black interlopers rate a mention in My Life With Boxers by Frau Stockmann, who is regarded as the mother of the Boxer breed.

But in the same breath as she introduces the black Boxer, she describes its “extinction”.

The Munich Boxer Club was so against the black coat that in 1925 it changed the standard to define the only two acceptable colors in a Boxer as fawn and brindle.

It’s possible some unauthorised breeding of the black-coated dogs carried on in unregistered dogs, but if it did there is no sign of it in the history books.

Black Boxers were unheard of for 75 years until a recent resurgence in the non-show dog population in countries like the US and Australia.

To this day the breed standard states that Boxers must only be fawn (ranging from tan through stag red to deep mahogany) or brindle.

Breeding for heavy brindles that appear black is frowned upon by the Boxer establishment because they consider it to be “purposely breeding disqualifications”, given only fawn or brindle Boxers conform to breed standards.

The standard specifies that in brindles the fawn must clearly show through the striping.

The AKC and other reputable dog clubs still refuse to register black Boxers.

Could Black Exist Via A Mutation In Boxers?

There are only two genes for coat color in purebred Boxers: fawn and brindle, brindle being dominant.

Mutation to produce a black coat is theoretically possible but so unlikely as to be implausible.

Black also cannot pass down in a hidden way through generations and suddenly pop up in a litter, because black coat color in dogs is caused by a dominant gene.

According to the breeders Newcastle Boxers “The only viable option, then, is the genetic influence of another breed”.

“There are those who try to sell their ‘rare black’ Boxers – however every one of these dogs that we have run across either does have some fawn on it, or is very obviously not a purebred Boxer.”

Breeders of purebred Boxers have often spent their lifetimes perfecting the breed as they see it, and as it’s laid out in the official standard.

They understandably take exception to any breeding that disregards or, in their view, undermines that standard.

However, the standard was written long ago and contains a number of prescriptions that many Boxer owners, vets and animal rights advocates regard as outdated and plain barbaric.

Many believe the convention of cropping ears and the requirement to dock tails or be “heavily penalized” in the show ring should be changed, for the good of the dogs.

Any discussions about the standard and what’s in or out tend to stir up intense argument and reveal staunchly polarized opinions.

Hence the reason why “black” Boxers can be a touchy topic.

What About White Boxers?

White in Boxers is technically not a third color but a type of marking known as “flash” that in the white Boxer covers the entire body.

White is one of three recognized marking patterns in Boxers:

Fawn dogs with white collars, socks and blazes are highly sought after in the show ring, but fully white dogs are not.

Whites do not conform to the breed standard which states that white must not make up more than a third of a dog’s coat.

White Boxers used to be killed at birth by breeders.

These days they are granted a limited registration and can participate in obedience, agility, service, therapy and companion dog competitions but not the conformation ring.

Actually, white Boxers are not all that unusual. 20 to 25 per cent of all Boxers are born white.

The American Boxer Club Code of Ethics prohibits the breeding of white Boxers, probably because it amounts to breeding a dog that doesn’t itself meet breed standards.

However, some breeders believe white boxers have a legitimate place in careful breeding programs, given their capacity to produce the flashy markings.

An estimated 5 to 8 per cent of all white Boxers will be completely deaf.

Whites are prone to sunburn but otherwise have no special health problems compared to fawn or brindle Boxers.

White Boxers: No Less Healthy
The Story Behind Your Boxer’s Coat Color
Should You Breed Your Boxer?

Black Boxers mightn’t technically exist but “black” is still a colloquial way to refer to a “seal” or “reverse brindle” Boxer with brindling so dark it looks black.

Put a “black” Boxer in the sunlight and sure enough, you’ll see glints of fawn as the brindling effect reveals itself.

If you’ve been sold a Boxer with a truly solid black coat and no trace of fawn on it anywhere, then the American Boxer Club and the American Kennel Club say it’s not a purebred dog.

Which matters not at all, because you love your dog just the same — as well you should.

How To Stop A Boxer Chewing Everything