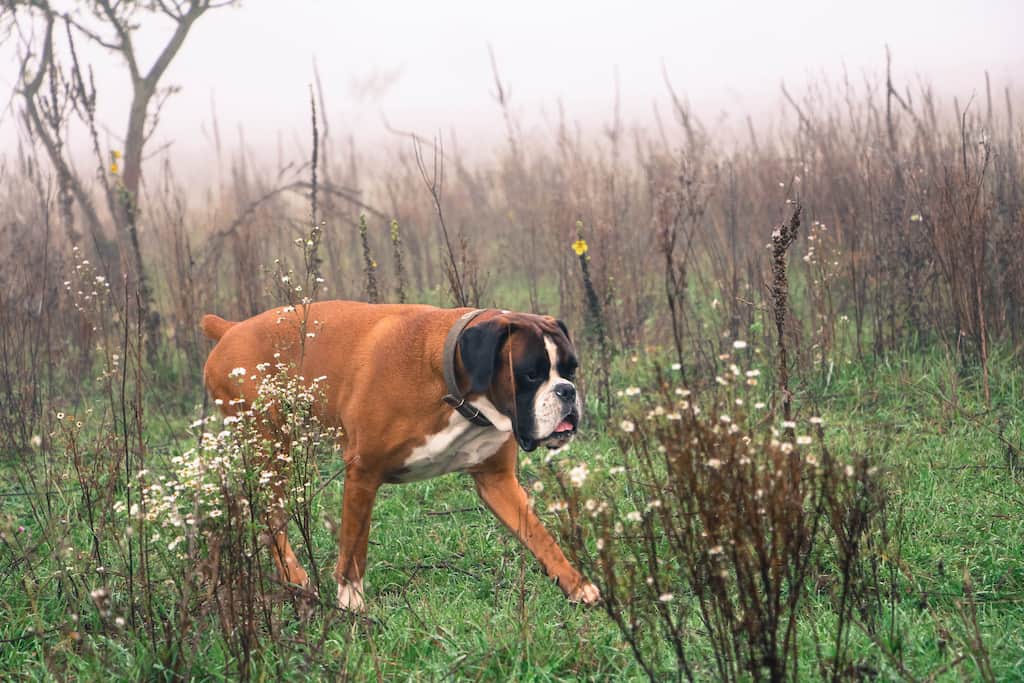 You’d be forgiven for thinking it’s an internet hoax. They are unusual, but bobtail Boxers are real.

Bobtail Boxers were invented in the nineties in the United Kingdom by geneticist and longtime Boxer breeder Dr Bruce Cattanach, who created bobtail puppies by mating a Boxer to a Pembroke Welsh Corgi.

Why Do Some Boxers Have Bobtails?

The breeding project was motivated by a desire to preserve the short tailed look of the Boxer, even once tail docking was banned.

The aim was to introduce the Corgi’s short tail into the Boxer’s genetics while retaining all the other characteristics that defined the Boxer, such as the blocky head shape, tall physique, short coat and large eyes.

The first litter was not promising. While five of the seven pups inherited a bobtail, they’d all but lost their Boxer-ness.

As the puppies got older they improved, a little. By the time they were five or six weeks old, Dr Cattanach said they “no longer looked like awful Boxers, but rather like an unrelated and somewhat cute breed”.

“The Corgi overwhelmed. The heads were Corgi-like, the legs were short, the coats were longish and somewhat wavy.. Only in eyes, expression and temperament did they resemble Boxers.”

Dr Cattanach deemed the Corgi-Boxer crosses “Borgies”. He put up a sign in the vet’s office and they “sold “like hot cakes”. The geneticist held a Borgy party in his garden when the pups reached 7 months.

The next step was to mate two of the first generation Bobtail dogs, called Dolly and Tess, back with a purebred Boxer. The objective was to get the Corgi out of the dogs’ appearance while keeping the short tail.

From these two pairings there came 16 puppies. Seven of them had bobtails. Dr Cattanach was delighted to find that several of the puppies looked like purebred Boxers of “pick of the litter” quality.

Among the female pups with short tails, was a white Boxer with a bobtail. He wasn’t entirely happy with the dog’s head (he considered it “unfinished” and shallow), eye, coat, bone structure and musculature. But the dog, named Jane, was Boxer through and through. The other traits could be perfected in subsequent generations.

To have “got the Boxer back” in the very first backcross generation was remarkable.

All in all Dr Cattanach declared the task of getting the bobtail into the Boxer had been “remarkably easy”.

By 2000 he had produced a total of 31 bobtail dogs over five generations.

What Is A Bobtail In Dogs?

A bobtail is a naturally short tail, albeit usually deliberately bred.

A bobtail can be distinguished from a docked tail by how it feels. It will taper off with gradually smaller and smaller bones. The shorter bobtails typically have a fleshy pad that droops and a filament of skin at the tip which is sensitive to touch.

All modern dogs descended from the wolf, with its naturally long tail.

Selective breeding and gene mutation have created the breeds we see today, with wildly varying appearances, including many with stumpy tails.

Corgis themselves originally had long tails that were docked until docking was outlawed in many countries and breeders began achieving the trait through breeding.

The same is true for many other breeds.

What Causes Boxers To Be Bobtailed?

In Boxers (and Corgis) bobtails are inherited as a dominant trait caused by what’s known as the canine T-box gene.

In fact, testing by the Finish And French Veterinary Schools found this same gene mutation is responsible for short tails in many other breeds including the Vallhund, the Australian Sheepdog and the Old English Sheepdog.

The length of the bobtails in Boxers ranges from near-absent to one-third normal length.

The majority of bobtail Boxers have tails about 2 inches long, the same length as docked tails.

What Other Dog Breeds Are Born With Bobbed Tails?

There are plenty. To name a few, breeds with short tails include:

Do Bobtail Boxers Have Health Problems?

Over five generations of bobtail Boxers Dr Cattanach could detect no spinal defects or other abnormalities associated with a single dose of the bobtail gene in Boxers.

There is, however, such a thing as a “lethal double dose” of the bobtail gene.

It’s thought that when puppies inherit two copies of the bobtail gene, they die in utero early in the pregnancy, and are resorbed.

This phenomenon was invisible to breeders but was discovered because of scientific advances in molecular genetics.

However, Dr Cattanach didn’t think it was necessary to actively avoid this scenario. If pups were dying at birth or being stillborn, that would be different. But, because the loss was occurring so early in pregnancy, the geneticist deemed it acceptable, no different from the “natural wastage” that has been documented in the pregnancies of laboratory mice.

“Not every fertilised egg implants in the uterus,” he reasoned. “Not every implanted embryo survives to term. Embryonic loss is common around the time of implantation in the mouse.”

Par for the course, was his view.

Were Undesirable Dogs Put Down When Breeding Bobtail Boxers?

In Boxer forums, bobtail Boxers are a subject of controversy.

Some oppose breeding programs to alter the Boxer for a short tail, on the basis that they think breeders kill puppies as part of the process.

Perhaps this distaste for breeding programs arises from the fact that white boxer puppies did used to be routinely euthanised for no other reason than that they didn’t conform to the breed standard, which requires Boxers to have more than a third of their bodies colored.

Dr Cattanach documented his entire project and the pups in each generation went to pet homes, while remaining available for breeding.

No pups were killed when they were born with long tails instead of the sought-after short ones.

It is true that in producing the fourth generation of bobtail Boxers, Dr Cattanach chose to euthanise three healthy puppies.

However this was not because they didn’t have the bobtail characteristic.

In fact, they were bobtails.

The only undesirable thing about them from a breeder’s perspective was that they were white, which, as well as not meeting breed standards, is a coat color that can be associated with deafness in Boxers.

So Why Were Three Bobtail Puppies Euthanised?

The mother had a difficult delivery and had to have a caesarian.

She nearly died on the operating table through fluid loss and had little milk. Two pups were tiny and survived only a few days.

Dr Cattanach opted to euthanise three more puppies to reduce the size of the litter, presumably so the others pups could survive.

(Even after taking this measure, the mother got mastitis and only three puppies in total made it, from the original litter of 13.)

Of course, crossbreeding to introduce new or desirable traits into established breeds was how the dog breeds that exist now were developed. The Boxer was created by crossing the now extinct Bullenbeisser (sometimes called a German Bulldog) with a British Bulldog.

In the UK, the Kennel Club approved Dr Cattanach’s application to register the bobtailed Boxers.

The early generations were considered crossbreeds but the fourth generation of dogs were registered as Boxers.

Throwbacks To Corgis In Bobtail Boxers?

One of the questions that niggled at Dr Cattanach was whether Corgi characteristics like short legs, pointy head and wavy hair could reappear in litters if bobtailed Boxers were bred together.

So, in one of his last investigations, the geneticist (who passed away leaving a massive legacy in early 2020) mated together two Boxers that were only four generations removed from the Corgi cross.

All puppies looked thoroughly Boxer at birth but the mother required a cesarian and the stitching got infected, resulting in a second operation and antibiotics. All of which saw her lose her milk for several days and three of her seven pups died.

So the conclusions were only based on the four surviving puppies, but none showed any return to Corgi features.

The bobtail Boxers currently being bred are two decades further removed from that original Corgi-Boxer cross, so the Corgi element has been even further diluted.

Conclusion: Where Can I Get A Bobtail Boxer?

Back in 2000, as Dr Cattanach concluded his breeding program and released his bobtail boxers to the world, he noted the strain had been received with “relatively little enthusiasm” by British Boxer breeders but considerable interest in places like Norway where tail docking bans were already in effect.

These days, Bobtail Boxer breeders can be found in the UK, Australia, Europe and even the USA.

One challenge with the Bobtail gene in Boxers is that it does not “breed true”, so a certain number of puppies in every litter will have long tails.

Bobtail boxers will have papers proving their short tails were inherited and not created by cutting off a long tail.

Boxer tail docking is still legal, and very common, in the United States.

If you see a short tailed Boxer in America, it’s more likely to have been docked, than to be an actual bobtail Boxer.

Why Do They Dock Boxer Dog Tails?