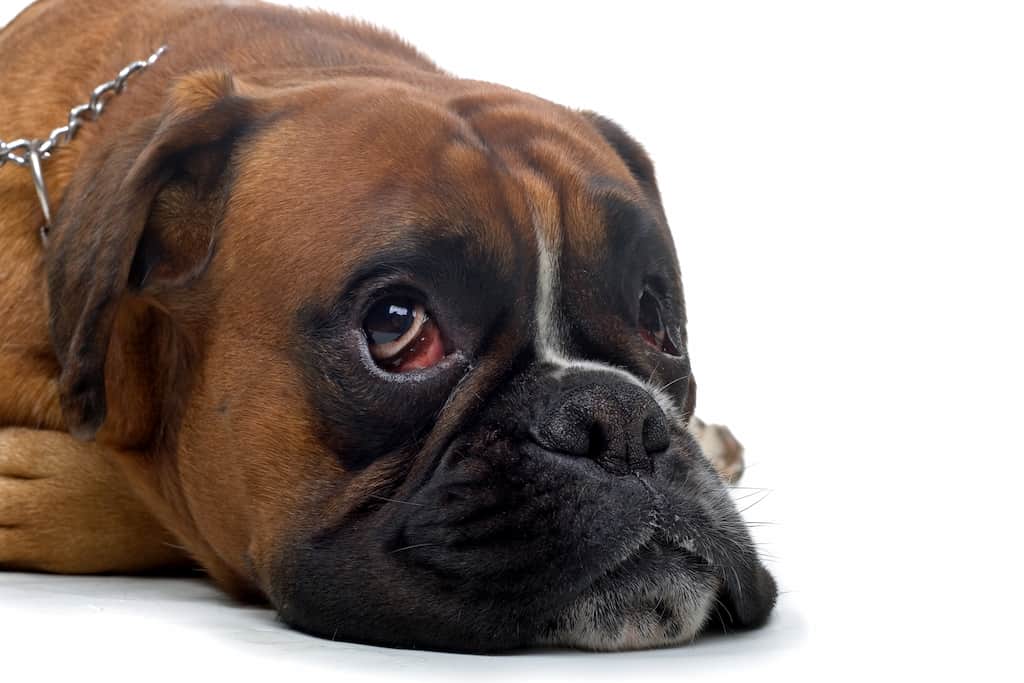 Sooner or later your Boxer is likely to have a “dietary indiscretion” like raiding the trash or stealing a spicy chicken wing — it happens to the most careful owners.

What to do if your Boxer eats something she shouldn’t depends on exactly what has been swallowed: eating a small cooked chicken bone may carry a different level of risk to a poisoned rat… which is different again to swallowing a wholly indigestible object like a tennis ball or sock.

In some cases it may be necessary to induce vomiting, or administer something to try to protect the digestive tract as the object passes.

Other circumstances may make a wait-and-see approach reasonable, or call for scans and surgery to extract the foreign body.

I am not a vet. This article is intended for general informational and educational purposes only. I encourage readers to view my full disclaimer. Boxer Dog Diaries is reader powered. I may receive a small commission, at no extra cost to you, if you make a purchase via links I share. Thank you for your support.

There is almost no end to the hazardous things that dogs including Boxers have been known to swallow, including leftovers from human meals and a wide variety of non-food items.

Why You Can (And Must) Feed Bones To Your Boxer
Can Boxers Eat Mango?
Best Chews For Boxers (And Ones To Avoid)
Top 10 Worst Toys For A Boxer

Other things that can be dangerous for your Boxer include:

Some foods and drinks consumed regularly by pet Boxers can be unexpectedly unhealthy such as:

Kibble: What Every Boxer Owner Should Know
The 90+ Contaminants In Tap Water

And then there are things often feared but which actually pose little threat, including:

Definitely toxic things your Boxer should never have access to include;

One simple but essential preventive measure you can take is to use self-closing pedal trash cans in your home — at least in the kitchen and bathroom.

A model like the Amazon Basics 50 Liter Soft-Close, Smudge Resistant Trash Can with Foot Pedal in Brushed Stainless Steel will make it impossible for your Boxer to rummage through the rubbish.

Symptoms Of Intestinal Obstruction In Boxers

Vomiting is often the hallmark of a gastric foreign body.

However, symptoms will vary according to factors like where the object has lodged and whether it’s caused a complete or partial blockage.

If the swallowed article was small, dogs may show no sign of feeling unwell, remaining active and eating, drinking and pooping as normal.

Chronic or partial obstructions, especially in the lower gastrointestinal tract, can produce all of the above symptoms, plus:

How Serious Is It If A Boxer Ate Something She Shouldn’t?

While it doesn’t always end well, swallowing something she shouldn’t isn’t an automatic disaster for a Boxer.

A worst case scenario involves a bowel obstruction which may or may not be accompanied by a perforation of the intestinal wall.

Indigestible objects can get stuck anywhere from the oesophagus (food pipe) to the intestines.

When a foreign body becomes lodged in the digestive tract, it stops the normal flow of gastrointestinal contents through the gut, which can trigger a cascade of effects including:

Surgery to remove blockages and repair the internal damage isn’t always successful and dogs can die.

The good news is that a Boxer dog’s stomach is actually able to cope with most things, including things that shouldn’t be there.

The body often knows what to do and in many cases, the offending item will be promptly vomited back up, no harm done.

Quite miraculously, things like tampons have sometimes passed through dogs’ guts and come out the other end without causing any ill effects.

Smaller mango pits, too, have been thrown up without intervention.

Some owners report dogs vomiting foreign bodies like socks and parts of tennis balls as long as several weeks after they were consumed — even months later in some cases.

If you know your Boxer has downed something potentially dangerous, you will want to weigh up whether, and how, to intervene.

Questions to ask when considering how to respond to your Boxer swallowing something unfortunate include:

If in doubt, always consult a veterinarian — if only by phone.

Quick action can make the difference between a good outcome and a poor one.

What To Do If Your Boxer Ate Chicken Bones

A classic scenario is the dog getting into the trash or snatching fast food leftovers from the counter or off the sidewalk.

If your Boxer dog ate:

.. she will probably be alright.

Note that raw chicken bones are readily digestible and completely fine to feed your Boxer.

In fact, raw chicken frames (carcasses) have a major place in a Boxer’s raw diet.

On the other hand, cooked bones of any kind should never be fed to Boxers, as cooking makes bones brittle and prone to splintering.

A splintered bone can pierce the digestive tract.

Luckily, it’s not uncommon for a Boxer to wolf the chicken bones down whole, without crunching them.

If the bones made it to the stomach without lodging in the throat or piercing the esophagus, the next problem is that cooked bones are indigestible compared to raw meaty bones.

Nevertheless, a small cooked chicken bone may still make it through the digestive tract without causing a blockage or injury.

In most cases, where a Boxer has swallowed cooked chicken bones:

Home Remedies When A Boxer Swallows Something

There are a variety of home remedies for swallowed chicken bones and other dietary mishaps.

These methods may or may not be appropriate for your Boxer’s circumstances.

Feeding some slices of white bread is perhaps your safest option in case of swallowed chicken bones, glass or other sharp objects.

Perhaps your Boxer knocked a glass dish off the counter and ate the contents, along with some shards of glass.

As discussed above, white bread may coat sharp objects with something soft, to ease their passage through the digestive tract.

Another alternative that some owners say has worked is feeding cotton balls soaked in milk, cream or half-and-half coffee cream.

The dosage is reportedly five to seven balls for dogs the size of a typical adult Boxer.

If you’re going to do this make certain the cotton balls are 100 per cent actual cotton, not the cosmetic puffs made from synthetic fibers.

Hopefully, within 24 hours, the swallowed object will be accounted for — either thrown up or excreted, safely encased in the cotton.

This can be done with hydrogen peroxide in an emergency, but is best done in consultation with a vet.

This may be appropriate for potential life and death situations involving poison or drug overdoses, and as an initial response when there is no vet nearby.

Some owners report using salt to induce vomiting: a few teaspoonfuls on the tongue, repeated after five minutes if the object doesn’t come up at first.

Activated charcoal is sometimes used to absorb toxins in the gut.

How To Prevent Your Boxer Eating Dangerous Things

What Prednisone Did To An 18mo Boxer
Boxer Licking The Air? It Could Be Acid Reflux

A special note about soiled nappies, tampons, sani-pads and other feminine hygiene products: these articles can be particularly appealing to dogs.

Be exceedingly careful with bathroom bins and even underwear in laundry hampers or on the bathroom floor.

Dogs have also been known to extract and eat pads put by owners into makeshift diapers worn during a Boxer’s heat cycle.

Better to use specially designed, absorbent dog diapers made for this purpose, known as bitch’s britches.

We like Dr. Judy Morgan’s Naturally Healthy Pets Washable Reusable Dog Diapers, which are also handy if your Boxer leaks urine, perhaps as a result of spay incontinence.

Boxer Leaking Urine? What To Know & Do
How Neutering Affects Your Boxer’s Body

It may not be wise to let a dog wear any of these items when unsupervised.

Surgery For Intestinal Obstruction In Boxers

Surgery to remove non-food items from the guts of dogs (and cats) is common, constituting tens of millions of dollars worth of claims each year to pet insurance companies.

If your Boxer is suspected of ingesting a foreign body, your vet will:

Note that ultrasounds have been shown to be much more effective than traditional radiographs in identifying GI foreign bodies.

If the item is still in the stomach, vomiting may be used to eject it.

If an object has made it to the colon, it will often manage to successfully pass without intervention.

Foreign bodies can be extracted either by:

Depending on how long the obstruction has been present and how far the dog’s condition has deteriorated, she may be too weak for immediate surgery.

Thankfully, Boxers are not among the breeds overrepresented in surgeries to remove foreign bodies.

The breeds most commonly affected include:

Younger dogs are thought to be more prone to swallowing non-food items.

Remember, anesthetic protocols for Boxers must not include the sedative acepromazine, which can cause dangerously low blood pressure and fatal heart arrhythmias in the breed.

Acepromazine: Why Your Boxer Must Never Have This Drug

Prognosis For Dogs Operated On For Foreign Bodies

Increased mortality after surgery is associated with:

Factors that had no significant bearing on the success of the surgery included:

Healing can take weeks or months, with the first three to five days critical.

If your Boxer has eaten something hazardous, don’t beat yourself up about it.

Stay calm and assess the risk before choosing the best course of action.

Don’t hesitate to consult a vet early — perhaps an emergency center — as they have access to additional tools like scans and can better manage interventions like induced vomiting.

Outcomes for the removal of obstructions via endoscopy or surgery tend to be better the sooner dogs receive help.

For the future, decide on what changes you can make to avoid a repeat.