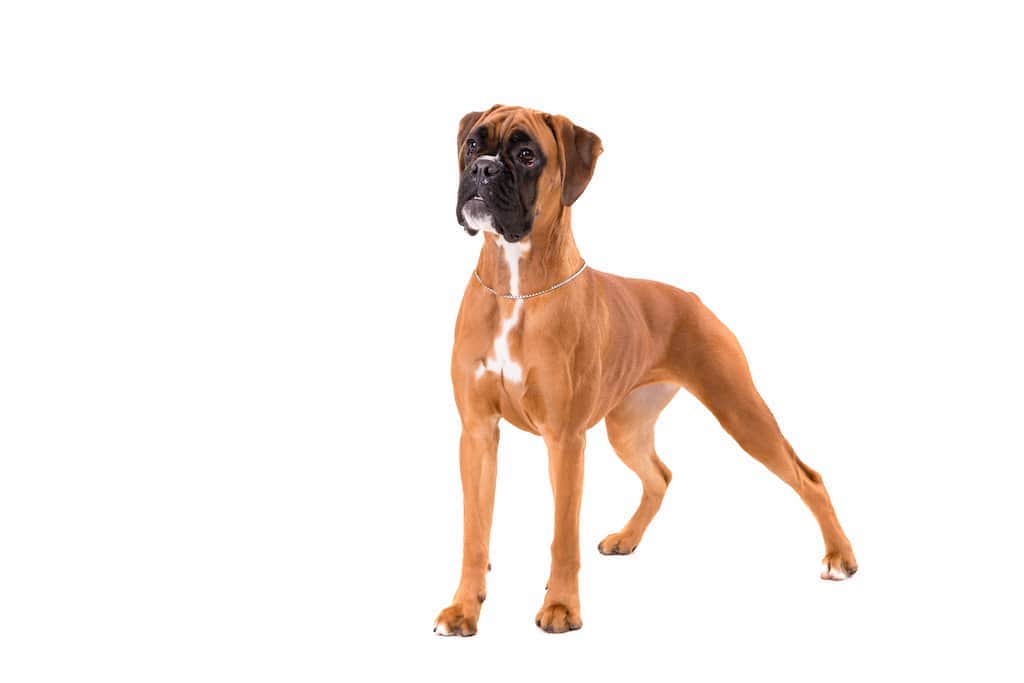 Boxer breed standards vary throughout the world but all Boxers should have certain traits in common.

Perhaps the most distinctive features of the Boxer dog, as described in the breed standard as it applies in the United States, are a:

Two areas of difference, depending on which country you’re in, are the Boxer’s ears and tail.

Cropped ears remain the norm, and docked tails are dictated by the standard in the States.

Elsewhere, both surgical alterations have long since been abandoned in favor of natural tails and floppy ears.

According to the current American breed standard, the ideal Boxer is:

Aside from being a medium-sized dog, the exact dimensions of an individual Boxer don’t matter so much (there is no size disqualification in the show ring).

Nevertheless, in the States, the height of an ideal Boxer dog is said to be 21.5 to 25 inches at the withers, which is the highest point of the shoulder blades.

Boxers with European bloodlines tend to be slightly shorter but more solidly built than Boxers with American heritage.

So called mini Boxers clearly fall outside the standard and are, in fact, crossbreeds.

In every Boxer, though, the overriding emphasis is placed on proper form and balance.

The Boxer Dog Head And Skull

It’s important for the snout to be right in a Boxer.

It should be broad, blunt and in correct proportion to the skull.

What are the correct proportions?

The muzzle should make up a third of the length of the head as measured from the tip of the nose to the occiput (the bump at the rear of the skull).

More later on what can go wrong with the Boxer muzzle — see the section dedicated to Boxer dog faults.

Should Boxers Have Short Or Long Tails?

The American Boxer standard dictates that the tail should be:

While there’s no quibble with the first two of these, the third is out of step with modern Boxer communities throughout the rest of the world.

In many countries, including in the Boxer’s motherland of Germany, tail docking is now banned.

Often the practice is explicitly outlawed on the basis of it constituting animal cruelty.

A dog’s tail is part of its spine.

Boxers, like all dogs, need their tails for balance and manoeuvrability when in full flight.

In the distant past there might have been a case for amputating the tails of hunting Boxers, to prevent injuries from fierce, clawed beasts like bear and boar.

In the modern pet Boxer, though, tail docking is a cultural relic of a practice that amounts to pure cosmetic surgery — an amputation which has consequences for a Boxer’s function and wellbeing.

You can learn more about some of the issues associated with tail docking in Boxers here.

Are Boxers’ Ears Supposed To Be Cropped Or Natural?

The American standard now allows for Boxers’ ears to be left natural, rather than cut and stitched in order to make them stand erect.

However, many show and pet Boxers still undergo this procedure to conform with their owners’ preferences.

Go here to be better informed about Boxer ear cropping.

“Faults” that are either seen as undesirable, or which will get a dog disqualified in the show ring, include:

Eyes that are blue can look striking on a white Boxer.

However, these dogs while rarely be produced by a serious Boxer breeder.

Even white Boxers that arise in professionally-bred litters will have brown eyes.

The third eyelid is the piece of tissue that you see stretched across the inner corner of the eye.

It’s also known as the haw and it should have a pigmented (i.e. brown) rim.

Pigmented haws are expressed in the standard as a preference, not a requirement.

Haws are harder to get right than eyes and some well-bred white Boxers will still end up with pink or unpigmented haws.

They can lend a bloodshot appearance to a Boxer’s eyes.

Noses are specifically mentioned in the breed standard as being black.

Boxer are often born with pink noses but they pigment up as the pup matures.

They’re usually mostly black by the time you bring your Boxer home at eight to 12 weeks.

Long noses completely change the look of a Boxer’s face, both front on and in profile, arguably detracting from the dog’s “Boxerness”.

You will never see a long snout on a Boxer shown in the conformation ring, or produced by a breeder worth their salt.

Wrinkles are part of the Boxer face, as long as there are not too many and they’re not too deep.

Creases should appear on the forehead when the dog is alert and the ears erect.

They will always be present on either side fo the muzzle, running downwards from the lower edge of the stop (where the skull meets the nose in the vicinity of the eyes.

A downfaced Boxer or a dishfaced Boxer looks decidedly wrong and stands out as much as a Boxer with a snout that’s too long.

The short nose is such an integral part of the Boxer look that any aberrations in this area really leap out at you.

It might look cute and garner likes on social media, but a well-bred Boxer’s tongue should not stick out when his mouth is closed.

Nor should any teeth be visible when the mouth is shut.

A Boxer’s coat should be tight fitting, without excess folds around the neck or elsewhere.

On a health note, if you pinch your Boxer’s skin and it doesn’t snap back into place, he may be dehydrated.

Most kibble-fed dogs exist in a permanent state of dehydration compared to raw-fed ones, due to fresh, real whole foods containing their proper moisture quotient.

Here is a starter guide for how to properly raw feed your Boxer.

All-white Boxers and true black Boxers, though sought-after by owners, are not considered desirable in Boxer show circles.

However, reverse brindle (brindling so tight it looks black except in the sun) is acceptable and white Boxers are granted limited registration.

Interestingly, an examination of the Boxer’s long and distinguished history reveals many of the original Boxers were all-white dogs.

Depending on which breeders you talk to, white dogs can also play a legitimate role in breeding programs as a source of “flash” or white markings in puppies.

Despite commonly held misconceptions, white Boxers are no less healthy than their fawn or brindle counterparts.

It is normal for Boxers to have black spots on their skin beneath white patches, visible when wet.

As mentioned earlier, a Boxer’s coat is short and tight.

This means long-haired or fuzzy Boxers, possibly produced in the very occasional purebred litter by a rare mutation of the FGF5 gene, do not conform to the breed standard.

We still love them though (!) and they are undeniably unique part of the Boxer family.

The breed standard extends beyond appearance to temperament.

Certain character traits should always be present in a Boxer, while Boxers should be free of other, negative qualities.

The ideal Boxer personality, as defined in the US breed standard, is:

Personality faults penalized when they reveal themselves in the show ring include:

Aggression is also obviously a behavior problem, unless specifically desired in a Boxer properly trained for guard, protection, police or military work.

However, as a breed with both hunting and guarding in its background, Boxers most certainly have the capacity to show aggression (like any dog), dependent on environment, training, handler and the individual situational dynamics.

Does It Matter If Your Boxer Doesn’t Conform To Breed Standards?

While aesthetic faults mightn’t matter to the average pet owner, who loves their Boxer regardless, faults are more than nit-picking and they are relevant to all of us, not just those in breeder circles.

The presence of faults (depending on which specific ones) can indicate poor breeding, which is likely to be associated with a number of practices that can have serious impacts on the health and wellbeing of puppies.

These poor breeding practices include:

Here are 24 Must-Know Questions To Ask Your Prospective Boxer Breeder before trusting them to be the source of your puppy.

Some aspects of a Boxer dog’s appearance are set in stone by breeding and genetics.

Others are changeable, dependent on care.

It’s the difference between nature and nurture.

The most powerful influences on a Boxer’s health, psychological wellbeing and physical appearance are:

These factors will shape your dog in ways positive or negative depending on the choices you make in caring for your Boxer from puppyhood onwards.

Defects arising from improper care — usually the feeding of a highly processed diet like kibble — will quickly mar a Boxer’s features.

As well as in the diet, and ingested or injected as pharmaceuticals, a Boxer’s chemical exposures also come from the environment.

Consider the chemical cleaners and scented plugins, room deodorizers, fabric sprays etc you use in the home.

They are known triggers for hives, which affect far too many Boxers.

Minimize the use of chemicals in the home and avoid walking your Boxer on grass treated with weedkillers, or at least wash his paws afterwards.

Neutering or spaying a Boxer puppy interferes with normal growth and development.

By removing the hormone-producing sex organs (ovaries and testes), the body is denied the regulating effect of these hormones on growth.

As a result, these dogs experience:

Owners may be quite happy with taller dogs, but it puts stress on joints, ligaments and other important structures.

Neutered and spayed Boxers have a higher incidence than their intact counterparts of a staggering array of health problems including many that affect the joints such as:

The damaging effects of neutering/spaying are worse the younger the procedure is done.

If dogs cannot be kept entire, there is a strong case from a health perspective to wait as long as possible.

No Boxer should be spayed/neutered before growth is complete, which is around two years of age in this slow-maturing breed.

The American standard says the Boxer’s hindquarters are to be strongly muscled but the forelimbs shouldn’t be overly bulky.

If your Boxer is well bred and gets plenty of varied exercise, this will happen naturally.

A right-weight Boxer isn’t something you judge with bathroom scales.

Take a look at your Boxer from the side: can you see a hint of the last few ribs and a definite tuck to the waist?

Now look from the top: is your Boxer a barrel front-to-back (overweight) or more an hourglass shape (healthy weight).

Boxers are lean, athletic dogs that should sport well-defined physiques without being overly loaded with muscle.

Your Boxer is perfect, no matter what the breed standard says. We understand!

However, conformation to the Boxer breed standard is about more than just winning ribbons in the show ring.

The average Boxer owner should know what a Boxer is supposed to be like, because deviations from this standard can be a red flag indicating poor breeding which ushers in a range of serious health problems.

Standards become irrelevant when rescuing Boxers or loving the Boxer already in your life, but they should be front of mind when choosing a new Boxer puppy.

The importance of the Boxer breed standard, and the “betterment of the breed” should also be on your mind if you’re contemplating breeding your own Boxer, which is quite an undertaking.

American Boxer Club, Official Standard for the Boxer, retrieved from the website September 2021