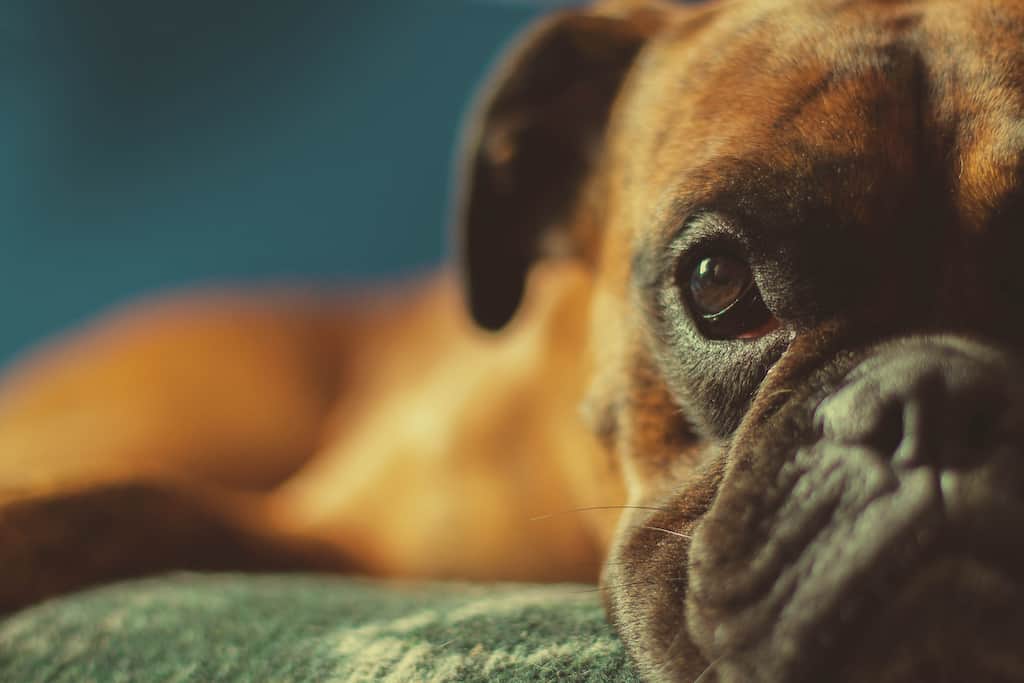 Dogs diagnosed with Boxer colitis can look significantly underweight and, in the past, have had a poor prognosis, but advances in treatment mean they can now recover.

The cause of Boxer colitis is not well understood but the condition has features in common with Crohn’s disease in humans.

It’s thought that an inherited defect in the dog’s immune defenses somehow allows bacterial invasion of the lining of the colon, leading to inflammation.

I am not a vet. This article is intended for general informational and educational purposes. I encourage readers to view my full disclaimer. Boxer Dog Diaries is reader powered. I may receive a small commission, at no extra cost to you, if you make a purchase via links I share. Thank you for your support.

What Is “Boxer Colitis”?

Colitis refers to any inflammation of the colon, or large bowel, which is the last part of the digestive tract.

There are many different forms of colitis, which can be acute, episodic or chronic.

This disorder of the large bowel typically affects young Boxers, with symptoms developing before two to four years of age.

Males and females appear to be equally affected.

Though seen primarily in Boxers, there have been sporadic cases in other breeds including:

Understandings of what causes a Boxer to develop histiocytic ulcerative colitis have changed over the years since the first case was reported in 1965.

It was originally thought to be a breed-specific form of inflammatory bowel disease (IBD) triggered by a dysfunction of the immune system i.e. “immune-mediated”.

But they still didn’t know what caused the dysfunction.

More recent research has linked the condition to an invasive infection of the lining of the colon by E. coli bacteria, similar to what happens in some forms of Crohn’s disease in humans.

Vets still don’t know what causes the bacteria to invade the mucosa or why it seems to happen mostly in Boxers.

More research is needed to identify the genetic basis for the condition, but it appears the breed may have a heritable defect in the immune system that makes the intestines susceptible to bacterial invasion.

(Several genetic defects have been found in people with Crohn’s.)

In terms of colitis more broadly, the causes are many and varied:

Help! My Boxer Ate Something He Shouldn’t

Colitis, in all its forms, presents as:

Once the condition becomes chronic, symptoms can include:

The #1 Reason Your Boxer Is A Picky Eater

Another feature of Boxer colitis is that it’s often unresponsive to treatment with immunosuppressants.

Endoscopy (Insertion of a tube with a camera into the digestive tract) will show an inflamed and ulcerated colonic mucosa (inner lining of the colon).

How To Put Weight On A Skinny Boxer (The Right Way)

It’s important to distinguish between a bout of acute, regular colitis and the more severe, chronic form that is Boxer colitis.

Acute colitis will typically resolve within a few days with minimal treatment.

A short fast of 24-48 hours may be all that’s required (withhold all food but make sure water is always available).

9 Reasons To Fast Your Boxer

Chronic colitis, however, will recur and worsen over time.

Definitive diagnosis of histiocytic ulcerative colitis in a Boxer usually involves a colonoscopy, a procedure whereby a tube with a camera is inserted via the anus into the lower digestive tract.

During the procedure, biopsies will be taken.

The classic finding when the tissue is examined is the presence of large macrophages (a type of white blood cell) that stain in a certain way under the microscope.

Prior to doing the colonoscopy, your vet will usually perform:

Worms & Your Boxer: What You Don’t Know

If E. coli is detected, a diagnosis of Boxer colitis is likely.

A culture is is recommended prior to commencing treatment, to identify the particular strain of E. coli and to confirm which antibiotics will work against it.

Boxer colitis is distinct from two other common digestive disorders:

There is a third condition every Boxer owner should know about:

Bloat, or GDV (gastric dilatation-volvulus), is different again, and a true emergency requiring urgent veterinary — often surgical — intervention, without which dogs can die within a few hours.

One simple way to lower the risk in deep-chested breeds like the Boxer is to always use a slow feeder such as the Outward Hound Slo Bowl, and make sure it’s positioned at ground level (not raised).

As mentioned above, acute colitis can typically be resolved by fasting for 24 hours or until symptoms resolve.

These days, the standard treatment for histiocytic ulcerative colitis involves antibiotics for four to eight weeks, namely enrofloxacin (Baytril), which is a gram-negative, broad spectrum antibiotic of the quinolone class, dosed at 5mg/kg once a day.

(In the past, treatment with novel protein diets, anti-inflammatories like sulfasalazine and immunosuppressants like prednisone and azathioprine had little effect.)

Dogs with GI issues should not have further:

Vaccinating Your Boxer: A Complete Guide
How To (Safely) Protect Your Boxer From Fleas

To quote the prominent integrative veterinarian Dr Karen Becker, “Any chemical that goes into your pet’s body has the potential to contribute to unaddressed sources of inflammation.”

Note: before accepting a diagnosis of colitis, it’s important to make sure you are feeding a fresh, natural canine diet i.e. a raw meaty bone-based diet.

Kibble and other highly processed dog food is not an optimal diet for Boxers and can, it itself, cause an array of gastrointestinal disturbances that may look very much like colitis.

Kibble: What Every Boxer Owner Should Know

Owners who switch their Boxers to a properly composed raw diet often see all symptoms resolve.

What Is The Best Food For A Boxer Dog With Colitis?

As mentioned above, it’s imperative to feed a biologically-appropriate diet to your Boxer.

Boxers experience various stomach problems when fed highly processed diets like kibble, and may appear to be picky eaters, until they are offered their natural diet.

The outlook for dogs with Boxer colitis was previously considered to be poor, with relapses common and owners even resorting to euthanasia.

Textbook treatments for HUC used to include combinations of dietary modification, anti-inflammatory and immunosuppressive drugs plus antibiotics including chloramphenicol, metronidazole and tylosin … all of which gave poor results.

Since the treatment has changed to be enrofloxacin alone, or sometimes enrofloxacin combined with metronidazole and amoxicillin, most dogs respond within three to 12 days.

Some dogs appear cured after one course.

Others require longer, or even drugs for the rest of their lives to manage the condition.

A lack of response may be due to an enrofloxacin-resistant strain of E. coli.

The large bowel disorder known as Boxer colitis is a much more severe and chronic condition than regular colitis.

Boxers suffering from the condition can develop an emaciated appearance.

The current thinking is that Boxer colitis is due to infection of the bowel wall with E. coli bacteria.

Treatment with the antibiotic enrofloxacin has much better success than previous approaches.

Researchers are trying to identify genes that may predispose Boxers to an immune defect that makes their intestines susceptible to bacterial infiltration.

Diet is key in promoting gastrointestinal health and a fresh, natural canine diet is advisable.