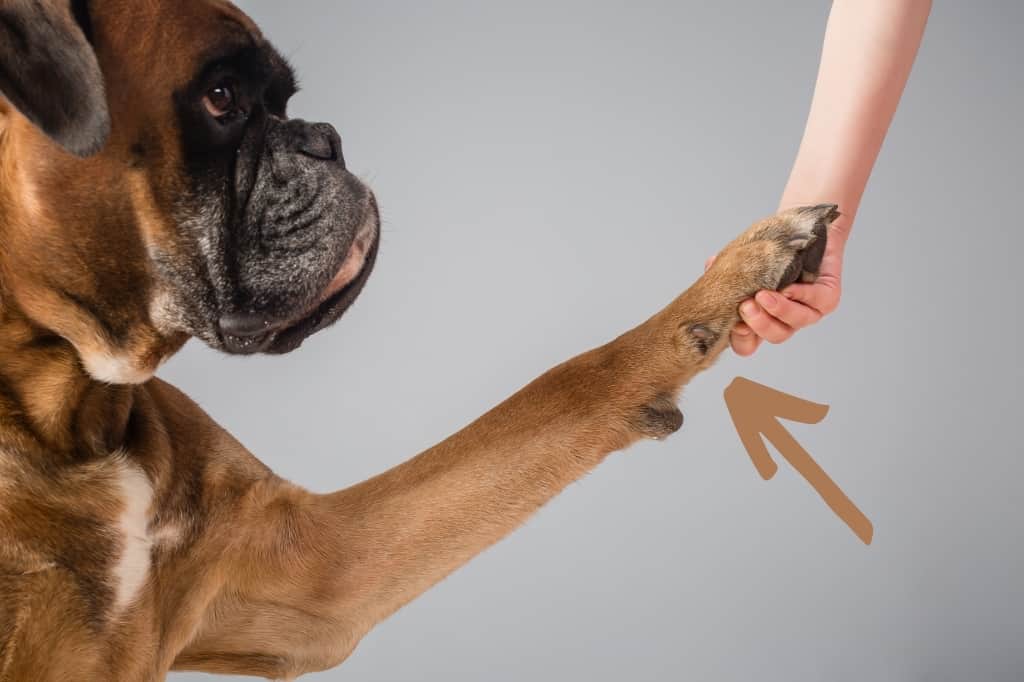 Look closely at your Boxer’s inner front leg and you’ll see what’s called his dewclaw, or — more likely — the slight scar where it was cut off when he was a newborn.

The dewclaw is mistakenly regarded by many as a vestigial remnant of canine evolution, best removed because of the chance it may catch on things and rip.

There is evidence dewclaw removal can cause problems including arthritis.

I am not a vet. This post is intended for general informational and educational purposes only. I encourage readers to see my full disclaimer. Boxer Dog Diaries is reader powered. I may receive a small commission, at no extra cost to you, if you make a purchase via links I share. Thank you for your support.

What Is A Dewclaw?

The dewclaw is a toe with a nail, positioned slightly higher up on the leg than the paw, in a dog’s “wrist” region.

All Boxers are born with dewclaws on their front legs.

However, most breeders in countries like the United States remove them in the first few days of life, before owners see their pups for the first time.

The normalization of dewclaw removal in the United States (though not in Europe) gives the impression this body part is a useless appendage, without any function.

Most North American owners and breeders believe dewclaws once had a purpose in ancient dogs but are now superfluous, and can be removed without any adverse effects.

An examination of canine anatomy and movement, though, tells a different story.

When the dewclaws are cut off, these muscles atrophy from disuse.

However, in dogs with intact dewclaws, it’s clear they do serve a purpose.

Dewclaws don’t touch the floor when a dog is standing still.

But they make contact with the ground as a dog moves, particularly when he runs.

With each footfall, the dewclaw stabilizes the leg.

This becomes even more important when a dog in motion changes direction at speed. (Zoomies, anyone?)

As the dog executes a turn, the dewclaw digs into the ground, supporting the lower leg and preventing torque (twisting force) on the limb.

Boxer Got The Zoomies?

Why Your Boxer Needs His Dewclaws

Without dewclaws, your Boxer’s leg is subject to unnatural twisting forces every time he runs.

Over a lifetime, this can result in:

Just because you haven’t observed ill effects in your de-dewclawed dogs, it doesn’t mean they’re not suffering.

You may have noticed that dogs aren’t complainers.

They naturally hide their pain until it becomes excruciating.

The role of the dewclaw in canine movement means it’s probably even more important to keep them intact in working Boxers and Boxers that are highly active (even met one that wasn’t?) or that compete in dog sports.

Some dogs also use their dewclaws to help grip when they climb out of water, reach up trees, grasp toys or when they’re working on chews like raw meaty bones.

Why Do Boxers Have Their Dew Claws Removed?

The possibility of a dewclaw injury is commonly given as a reason for dewclaw removal in puppies.

How common are ripped and torn dewclaws?

Not very common at all, according to canine sports medicine consultant and veterinarian Chris Zink, who specializes in rehabilitating dogs with performance-related injuries.

In her view, it makes much more sense to deal with an injury if it happens, than to pre-emptively cut the dewclaws off all dogs “just in case”.

In fact, there is just as much chance of injuring ANY of a dog’s claws.

A 2018 study found the most frequently injured digit in dogs was the outside front toe.

The dewclaw was the least frequently injured.

Furthermore, the researchers found removal of the dewclaws may predispose the dog to injuring other parts of the foot and limb.

Dewclaw removal in Boxer dogs was once as automatic and uncontroversial as other procedures like tail docking, ear cropping and the practice of killing white Boxers at birth.

Why Do They Crop Boxers’ Ears?
Tail Docking

As attitudes change and awareness grows, these practices are coming to be regarded very differently, through the lens of animal cruelty.

The Boxer breed standard in the United States used to require breeders to remove dewclaws.

This is no longer the case.

The current standard merely says dewclaws may be removed.

Gentry Boxers describes various methods that essentially involve using suture scissors to snip off the toe at the base and then dig out any remaining bone.

The American Boxer Club supports dewclaw removal, along with ear cropping and tail docking, “to maintain breed character and preserve the history of the breed”.

In the show ring, some breeders (not just of Boxers) feel the dewclaw detracts from a dog’s overall appearance or “conformation”, and prefer declawing to create a “cleaner” look.

The ABC asserts that because dewclaw removal is performed when puppies are so young, the nerve endings are not fully developed and “discomfort is minimal”.

Take a look at the video and make up your own mind.

Some Boxer breeders like the Ohio-based HavenWoods Boxers stopped removing dewclaws (and docking tails) due to the distress they witnessed.

“They scream during the procedure, when we return home they cry and whimper into the next day, and it is also very stressful for the mother and me.”

Removing dewclaws in adult Boxers is more complicated than in newborns.

The procedure requires anesthesia, which introduces a higher level of risk to the dog.

How To Prevent A Torn Boxer Dog Dewclaw

A torn dewclaw, like any injury, can be painful.

Keeping the nail short is the key to avoiding tears.

Dewclaws are more likely to catch on things if they’re allowed to get long and protrude.

If your Boxer is lucky enough to have retained his dewclaws, it’s important to maintain them.

Because the dewclaw is not in contact with the ground as much as the rest of a dog’s nails, it doesn’t wear down as naturally and can easily overgrow.

This is not only a risk to your dog, but can deliver a nasty scratch.

So, don’t forget about the dewclaw when trimming your dog’s nails.

How To Cut Your Boxer’s Nails At Home (Stress Free)

This is, thankfully, less of a risk in Boxers than other breeds where long coats can conceal these nails.

Neglected dogs that end up in shelters can present some of the worst cases of overgrown dewclaws, even to the point where the nail can curve over, puncture the leg itself and become ingrown or embedded.

It’s these extreme examples that add weight to the argument for dewclaw removal, with breeders fearing owners will not attend to nail maintenance.

How To Trim An Overgrown Dewclaw

Untrimmed nails develop longer quicks which then make it difficult to cut the nails as short as they need to be.

If this has happened, you’ll need to trim your Boxer’s dewclaws every few days, each time taking it as close as possible to the quick.

Gradually you will be able to “train” the quick to recede, allowing you to return the nail to the correct length.

Use a grinder like the Dremel Lite (rather than scissors or a guillotine) to avoid nicking the nerve or blood vessels.

Should I Remove My Boxer’s Dewclaws?

Dewclaw injury is more of a risk if the dewclaw is not well attached and hangs from the “wrist”.

If this describes your dog’s dewclaw, removal may warrant consideration.

However a normal, firmly attached and well maintained dewclaw should pose no issue and will benefit your dog’s overall joint health and mobility.

If you wish your pup to keep his dewclaws, talk to your breeder before the litter is born and explain your reasoning.

Do Boxers Have Back Dew Claws?

Unlike some dogs, Boxers have no rear dewclaws.

Hind dewclaws, in breeds where they’re present, are truly non-functional, without any accompanying tendons or muscles.

Far from being dead appendages that have outlived their usefulness, front dewclaws play an important role in stabilizing your Boxer’s legs during movement.

Dewclaw removal can have lifelong consequences including predisposing a dog to arthritis.

Keep your Boxer’s dewclaws trimmed short as part of general paw care and you’re unlikely to ever have a problem with them catching on things, scratching human skin or tearing.