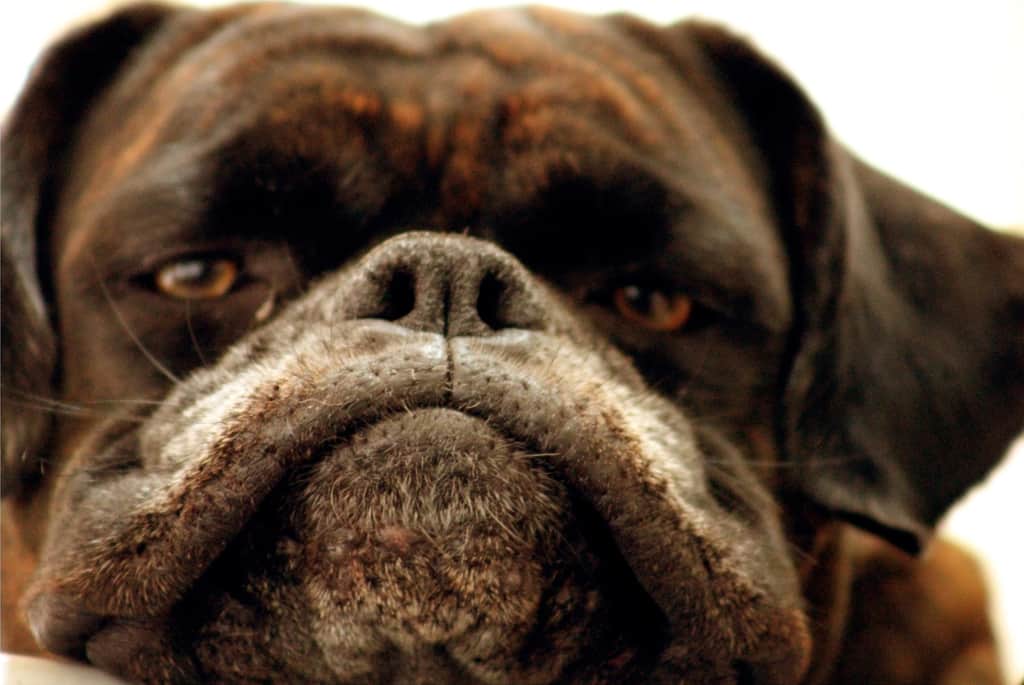 Though common in the breed, Boxer acne will not occur in an optimally healthy Boxer.

What Is Boxer Dog Acne?

Boxer dog acne is the name given to irritation of the hair follicles on a Boxer’s chin or lips.

Your dog may scratch his chin to the point of drawing blood.

To call it acne is a bit of a misnomer.

Unlike the breakouts experienced by human adolescents, canine acne is no longer thought to be hormonally caused.

It is not an inevitable part of your Boxer’s puppyhood.

If your Boxer has “acne” you may see:

A Boxer with this relatively minor skin irritation will seem otherwise healthy.

Or he may also suffer intermittently from other symptoms commonly labelled as “allergies”.

How Is Boxer Dog Acne Diagnosed

Boxer dog acne is generally recognisable by how it looks, and its location on the chin.

Conventionally trained vets typically want to take a scraping to identify which bacteria are present, with a view to prescribing an antibiotic.

But most Boxer dog acne is primarily sterile, meaning there is initially no infection.

Instead, it is an irritation of the skin.

The key question to ask is: what is causing the irritation?

Conventional vets admit the cause of Boxer dog acne is not well understood.

So it’s perhaps no surprise that several mistaken beliefs circulate amongst Boxer owners.

The first is that plastic food bowls are to blame.

This idea probably arose from the fact that trauma can cause skin abrasions and break off hairs, leading to inflammation of the hair follicle.

If that follicle ruptures its contents further irritate the skin.

A high quality, non-toxic, BPA-free plastic bowl should not cause this though.

Only low quality plastic that has become rough can scratch and abrade your Boxer’s chin while he eats.

Throw out any dish that develops this kind of wear and tear.

The other idea that gets mentioned by owners is that plastic feeding dishes have bacteria on them .. and that bacteria then causes Boxer dog acne.

But acne is not usually bacterial — any infection is secondary to the irritation.

And properly washed and maintained plastic bowls will not harbor bacteria.

So What Is Going On?

From a holistic health perspective, Boxer dog acne is caused by the same process that causes most disease: an accumulation of toxicity in the body.

Normally, the body detoxifies via the lymph vessels and organs like the liver and kidneys which constantly purify the blood.

Toxins are filtered and waste is excreted as pee and via the gut as poop.

But, when the toxic inputs outstrip the body’s ability to detox .. another organ is enlisted to help: the skin.

The skin’s role in eliminating toxins is why it’s often called “the third kidney”.

Metabolic wastes are acidic and irritate the skin — including the hair follicles — on the way out.

But what would cause a Boxer’s body to be overloaded with toxins?

Modern life as a pet dog.

Dogs eat, inhale and absorb toxins on a daily basis in:

Boxer acne can also be caused by:

Other signs of overfeeding and fat overconsumption that can accompany Boxer acne include:

The fattiness of factory-farmed meats routinely causes our dogs to consume on a daily basis a level of fat for which there is no biological precedent: dogs evolved eating lean, game meats.

Raw feeders should return the fat:muscle:bone ratios to more natural levels by trimming fat from meats like chicken, beef and lamb.

Venison, rabbit and roo will be much more naturally in the right proportions.

Brown or reddish stains in the skin folds under the chin sometimes accompany Boxer dog acne.

What is going on here?

Boxers have deep creases in the skin on their chins where moisture can collect.

These warm, humid folds are exactly the kind of terrain where yeast and bacteria thrive.

Ordinarily, this is no problem.

On a healthy dog’s skin, the naturally-occurring microbes stay in balance, limited by the same thing that limits natural populations of every living thing: how much food is available.

What nourishes skin microbes? The oils and other substances excreted through your dog’s skin.

However, when your dog’s body is toxic, and excreting a lot of toxins and excess wastes via the skin, the food supply is so abundant that it supports microbial overgrowth.

Your Boxer may have rust-colored stains in his chin creases and you may think he has a yeast “infection”.

But what caused the explosion in the food supply?

Fix what you’re putting into your Boxer’s body … and the yeast will fall back to normal levels.

You will see the discoloration clear.

No antifungals or antibiotics necessary.

How Not To Treat Boxer Dog Acne

Common veterinary responses to a diagnosis of canine acne include:

And, in persistent cases, vets sometimes want to prescribe:

It’s best for your Boxer to avoid drugs wherever possible, especially for extended periods.

Though medication may temporarily suppress symptoms, all drugs are toxins that create a burden on the body, one it then has to work to expel.

Commonly prescribed steroids like prednisone exact a toll on just about every aspect of the body’s functioning.

On top of that, the phenomenon of antibiotic resistance means that each time you give your Boxer antibiotics for something minor, they are less likely to work in future if you ever need them for something major.

More to the point .. none of these drugs do anything to address the cause of the problem.

Luckily, you do not need to medicate your Boxer to banish acne.

But it does require making a fundamental change to your dog’s care.

Boxer dog acne, while a minor problem in itself, is a warning sign.

Ignore it, and your Boxer will be dealing with more serious health problems down the road.

Make a correction now, and your Boxer will reap the benefits.

The key is proper feeding and avoidance of toxins.

If your Boxer has acne on his chin you are almost certainly feeding kibble or some other kind of highly processed commercial dog food.

Replace this junky food with a fresh, raw diet and Boxer dog acne will become a distant memory.

Note that when you first improve your dog’s diet, symptoms including itching can initially worsen.

Rest assured this is temporary, as your dog’s body works to clear the toxic backlog.

These are productive symptoms, in that they are serving to eliminate the toxins and clean up the internal environment.

Better out than in!

As long as you refrain from putting fresh toxins into the body, the skin will soon clear — permanently.

In the meantime, stay away from medicated washes and simply clean your dog’s chin with a warm, damp washcloth.

This will dilute and remove toxins from the skin, soothing the itch.

See also: How To Raw Feed Your Boxer

Remember, poor quality food is not the only source of toxins.

To reduce your Boxer’s toxic load, you should also eliminate or minimize the use of:

All these inputs introduce toxicity into the body.

The effect is cumulative.

The fewer toxic inputs, the more likely the body’s detoxification mechanisms will be able to keep up.

The result? Clear skin and no Boxer dog acne.

(And those “allergies” will disappear too.)

Other Breeds Affected By Canine Acne

Short-coated breeds are most commonly affected, including:

What If It’s Not Boxer Dog Acne?

Boxer dog acne is pretty distinctive looking and does not involve any other symptoms aside from the itchy and irritated chin.

Your dog’s mood, appetite and activity levels will be normal.

If you suspect you could be dealing with something else, you might want to have your vet run some tests to rule out more serious conditions.

Vets can take scrapings to examine under a microscope, or pluck hairs for a culture.

Other diseases that can affect the chin and muzzle area .. and sometimes be mistaken for acne include:

Boxer dog acne is an indication your dog is being exposed to too many toxins.

A common culprit is the diet — usually kibble or another highly processed commercial dog food.

By feeding a fresh, natural, species-appropriate raw diet, you will go a long way towards resolving chin irritation in your Boxer.

Also look at whether you’re having your dog ingest other chemicals by giving him wormers, flea and tick treatments, medication and vaccines.

By addressing the problem at its source, you will resolve Boxer dog acne without drugs.