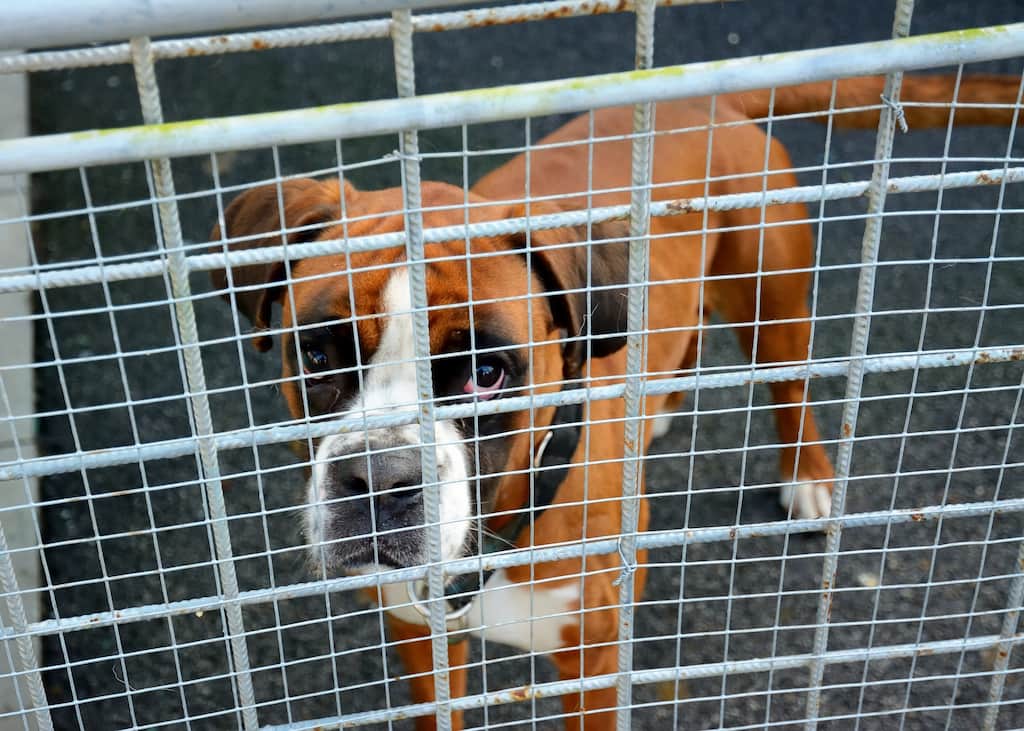 Boxers consistently rank among America’s most loved dogs, but the large number of Boxer-specific rescue agencies speaks to the challenges that accompany the breed.

While adopting an adult Boxer has advantages over getting a brand new puppy, like avoiding the trials of potty training, rescues come with baggage that can include behavior problems and already-compromised health.

The demands of a Boxer can prove too much for some owners, so it’s important to know what you’re getting yourself into — a caution that goes double for a dog that’s already grown.

Here’s what you need to know, and six questions to honestly ask yourself, before you commit to adopting an adult Boxer dog.

Whether you’re rescuing an adult Boxer or getting a puppy from a breeder you need to know a bit about the breed’s history, temperament and health so that you understand what a Boxer needs in order to fit in as a happy and well-behaved member of the family.

Amazing as they are, Boxers are not for everyone.

A bunch of toys and a walk around the block every few days won’t cut it. Boxers are interactive dogs that need owners with time to spend including them in their lifestyles.

If either physical or mental activity is lacking, a Boxer can feel at a loose end, and that is when misbehavior arises.

When your rescue Boxer comes to you, it’s reasonable to expect that he’ll already have some less-than-ideal behavior patterns that you will need to retrain.

The rescue organization will have done an assessment of behavior and temperament, but they won’t know a detailed history and the full picture of the dog’s personality and hangups won’t emerge until after you bring him home.

He may bark when left alone, he may be in the habit of digging to release frustration. He may have a history of scaling fences to escape.

Perhaps he has never been taught enough impulse control to know how not to jump up when excited.

Maybe he has food aggression or resource guards or has a morbid fear of vets or a noise phobia or an uncontrollable impulse to chase cats.

Perhaps small children scare him because one mistreated him in his former home. He might be reactive to other dogs when on leash as a result of prior encounters or attacks.

There is bound to be something — perhaps something so pronounced that it prompted the previous owner to surrender the dog rather than correct the behavior.

None of these issues are insurmountable, but it always takes more work to undo established behaviors than to avoid them arising by raising a pup right in the first place.

Training an adult Boxer can be just as challenging, frustrating and time consuming as raising a new puppy — if not more.

An adult Boxer doesn’t represent any kind of short-cut.

Ask yourself: Am I committed, and do I have the time and knowledge, to work through whatever issues arise, no matter how challenging?

2. Your Boxer May Have Pre-Existing Health Issues

Perhaps the biggest drawback of adopting an adult Boxer is that many decisions with long term impact on a dog’s health have been taken out of your hands.

Dogs obtained through rescue organizations will also be fully vet-worked including vaccines and the administration of chemical parasite control including worming and flea and tick treatments.

While commonly accepted in the United States, and even equated with responsible dog ownership, these practices can exact a heavy toll on the health of Boxers.

Neutering is associated with adverse health consequences for a dog’s health, including an increased incidence mast cell tumors.

Once your new Boxer is in his forever home, you can make changes, but even if you do everything right, you may not be able to undo everything that’s been set in train by past choices.

Overexercising or inappropriately exercising a Boxer puppy before development is complete, for instance, can lead to arthritis and other joint problems later in life.

A rescued Boxer will invariably be carrying the consequences of being kibble-fed, not just at the shelter but likely since puppyhood by the previous owners.

For Boxers, a high quality diet — and this means a fresh, natural canine diet — is critical in order to avoid the various health conditions all too often associated with the breed.

How To Care For Your Senior Boxer

Happily, diet is one of the choices you are free to make from now on and you will see your Boxer’s health improve dramatically when you raw feed in the right way.

Ask yourself: Do I have the resources, and am I willing, to provide a fresh, natural canine diet for my rescue Boxer?

More Information: How To Raw Feed A Boxer

3. Your New Boxer May Clash With Your Existing Dog

Adult dogs are generally harder than puppies to integrate into a household that already has another dog.

Though highly trainable, Boxers are renowned for being stubborn and headstrong and any adult Boxer will have these qualities in them to a greater or lesser degree.

There is potential for conflict in any multidog household.

Leaving the dogs to “sort it out” is not the right approach.

For the sake of your existing dog and your new Boxer, there is a need for effective leadership by you as the owner.

It’s your job to establish the “pack” hierarchy and maintain harmony.

This doesn’t mean asserting yourself as the “alpha” through the use of force.

It means being the kind of leader your dog respects and obeys.

If you’re encountering problem behaviors like destructive chewing, barking or jumping with your existing dog, or your dog is incompletely trained, it’s probably a good idea to postpone the Boxer adoption plans until you’ve got your first dog’s behavior where it needs to be.

There’s nothing wrong with getting a second dog to provide company for the first.

But be aware that getting another dog in hopes of solving behavior problems in your first can backfire: you may just compound the trouble.

If you’re too busy to train one dog, rethink taking on a second.

Should I Get A Second Boxer?

4. Adoption Isn’t A Cheap Way To Get A Boxer

While a rescue may initially cost less than a papered puppy from a registered Boxer breeder, if you’re getting a rescue in hopes of saving money … it could be a false economy.

Whichever way you go, there are no guarantees.

All things being equal, an adult dog is closer to an age where problems tend to arise more frequently.

It may be sooner than you think that you have to outlay large amounts of money to deal with the degenerative health conditions that accompany ageing.

Ask yourself: Can I afford to provide my Boxer with everything he needs, including proper fresh food and emergency care if something goes wrong?

5. Your Boxer Will Take Time To Settle In

Bringing home an adult Boxer will involve a certain level of disruption.

Even when it comes to house training, you may expect a fully potty trained dog … but toileting can regress under stress and there may well be some accidents.

Keep in mind your Boxer has been through a lot of upheaval, from being removed from the only home he knew, to the shelter experience and now the shock of a totally new life.

As long as you’re patient and give your Boxer time and a supportive environment in which to adjust, you will get there.

Ask yourself: Is my lifestyle, family situation and home environment such that I can create a calm, secure environment that my Boxer feels safe in?

6. Rescues May Have Onerous Requirements

Some rescue organizations require prospective owners to show proof that they annually vaccinate and chemically worm their existing pets before allowing them to adopt.

They may follow up and enforce practices that interfere with your freedom to care for your dog naturally.

Check: Will the shelter accept holistic approaches and titers in lieu of revaccination? What ongoing involvement will the agency have in your dog’s life post-adoption?

Through no fault on their own, some Boxers are given up by their owners.

Whatever has gone on in the dog’s former life, this history will have left a mark both behaviorally and health-wise.

Anyone adopting an adult Boxer needs to honestly assess their own willingness to grapple with these unknown quantities, before making the commitment.

None of this is to deter you from rescuing a Boxer.

Once you’ve thought it through thoroughly, adoption is a wonderful way to bring a Boxer into your life.