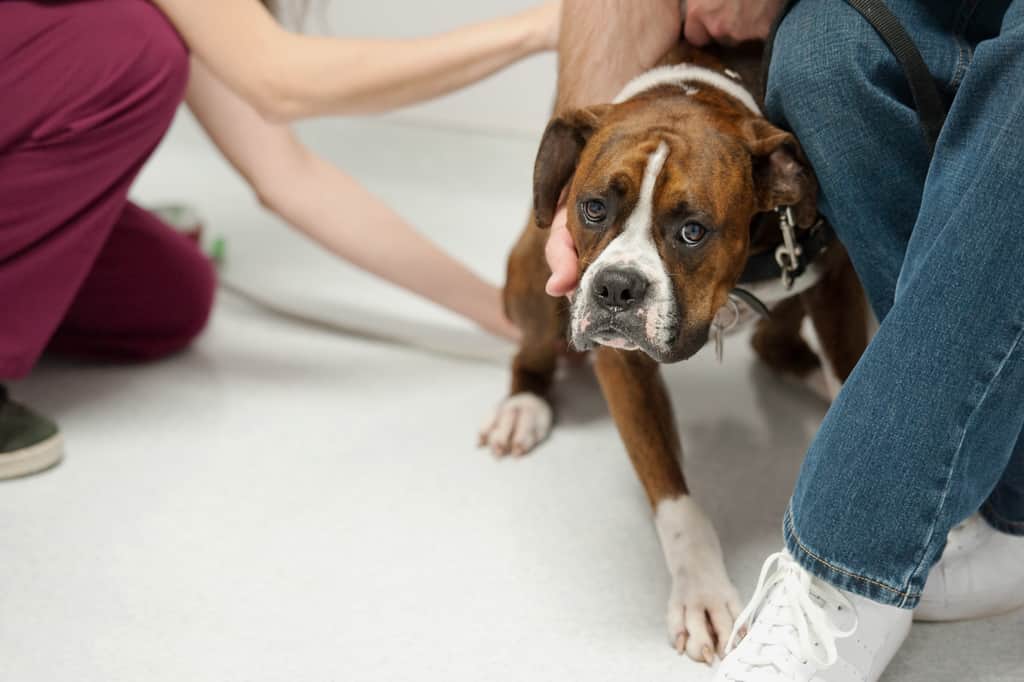 Boxers are larger than life dogs and that same quality can amplify any fear they feel.

As a breed, Boxers are actually renowned for being fearless and generally have robust temperaments, if a little prone to overexcitement when young.

However, some owners do report fear and anxiety in their Boxers.

Fear in Boxer dogs is highly situational. It may be temporary, connected to a passing phase of development or it can be the understandable result of a negative experience in the dog’s past.

Anxiety might be a learned behavior, inadvertently reinforced by the owner’s reaction.

The good news is that fearful and anxious behaviors can be fixed with patience and the right techniques.

Regardless of what your Boxer is afraid of, distraction, distancing and desensitization can help ratchet down the distress.

Are Boxers Prone To Anxiety?

Anxiety can affect any dog, regardless of breed.

In theory, it shouldn’t be an issue for a well-bred, well-reared Boxer with sound temperament.

Which is good news, because it means the problem is within your power to fix by making a few tweaks.

Causes Of Fear And Anxiety In Boxers

While Boxers are not necessarily prone to anxiety, they are often subject to a range of conditions that can cause anxiety.

A wifi camera like the Blink Mini that allows you to watch your dog remotely while you’re out may help you understand how your Boxer’s anxiety-based behaviors arise, rather than just coming home to a distressed dog and a destroyed living room.

“Separation anxiety” is the diagnosis du jour for dogs that misbehave when left home alone.

Genuine separation anxiety is a syndrome involving high agitation and symptoms up to and including involuntary defecation and urination.

There’s a whole spectrum of behavior short of separation anxiety that may just mean the dog is:

Think of “the COVID effect”.

Dogs used to having family home all the time, are suddenly left alone for hours on end as normal work life resumes.

Is it any wonder the dog doesn’t cope?

If left alone for prolonged periods, particularly in a confined space like a crate, they may understandably experience distress and exhibit behaviors consistent with separation anxiety.

This is not due to any inherent problem with the dog.

Rather, the anxiety has arisen due to the mistakes made by the owner.

How To Successfully Crate Train A Boxer
Can A Boxer Live Outside?

One cause of anxiety and fear-based behaviors that owners are generally unaware of is neutering.

Neutering/spaying is known to have a range of negative effects on a dog’s physical health and psychological wellbeing.

When Should You Neuter Or Spay Your Boxer?

Research has found neutered male dogs are more likely to display a range of fear-based behavioral problems such as:

Reputable breeders select dogs based on temperament as well as health and physical appearance.

Carefully bred puppies generally have the makings of a well-adjusted dog.

There is a school of thought that American Boxers can tend to be more highly strung than Boxers with European bloodlines due to the qualities that have been selected for in Europe where Boxers are much more of a working dog than in the US.

Removed From Litter Too Young

Puppies need to stay with their mothers and their littermates until they are eight to ten weeks old.

Removed earlier they miss out on an important period of socialization during which they learn how to be a dog, including “bite inhibition”.

Mouthiness and problematic biting in puppies can be related to puppies being rehomed too early.

How To Stop A Boxer Puppy Biting

Anxiety is not something you want to let persist, for a range of reasons including the following:

How To Stop Destructive Chewing In Boxers

What To Do If Your Boxer Is Afraid Of Fireworks

Fireworks are a common cause of anxiety for dogs, making New Year’s Eve and other public celebrations a dreaded time in the lives of many owners.

The infrequency of fireworks makes desensitization a challenge, as there are few opportunities to get dogs used to the noise.

Fireworks don’t have to turn your Boxer into a quivering mess though.

A little planning can take the stress out of cracker nights for both you and your Boxer.

How To Calm An Anxious Or Fearful Boxer

Whether it’s fireworks or another frightening situation, try as many as possible of the following strategies to distract and downplay:

Can Boxers Eat Bones?
5 Tricks To Teach Your Boxer

Fear Of Other Dogs

Boxers generally get along well with other dogs, but fear and aggression can sometimes develop.

Boxers And Other Dogs
Are Boxers Dangerous?

Off leash dog parks, puppy school or dog daycare can be to blame for instilling fear of other dogs, which can lead to aggression.

Though popular with owners, these settings are quite unnatural for dogs.

They force dogs to socialize across packs (the pack being the dog’s human household) and are ripe for conflict.

If your Boxer is still a puppy and has suddenly become fearful, he may be going through one of the developmental stages referred to as “fear periods”.

Many Boxers reach maturity without experiencing any obvious fear periods.

It may be as subtle as your pup suddenly startling in response to things he previously had no issue with.

Fear periods pass on their own.

Avoid coddling your pup or picking him up every time he encounters something unfamiliar.

Going into protective mode will only reinforce in your dog’s mind that there is something to be afraid of.

Don’t force your dog to approach things that frighten him, give it a wide berth if necessary, but don’t dwell in the fear. Proceed with calm reassurance.

The idea is to desensitize your pup to the situation by giving him the chance to discover there’s actually nothing to fear.

How To Raise A Well-Adjusted Boxer

In puppies as in children, a healthy diet fuels a healthy mind and body.

Just as highly processed foods have been connected to behavioral disorders in children, packaged dog food with its synthetic ingredients is best avoided.

What To Feed A Boxer Puppy
Raw Feeding An Adult Boxer

Socialization means more than just having your dog meet other dogs and people.

It’s good practice during puppyhood to make a point of exposing your Boxer to a range of new experiences on a daily basis.

Give him the chance to explore sights and sounds that might initially scare him just a little.

Mastering life just outside his comfort zone will build confidence in your Boxer pup and make for a more outgoing, secure and well-adjusted adult able to handle the unfamiliar.

Boxer Scared Of Going To The Vet?

As with everything, it’s easier to avoid a problem in the first place than to fix it once it’s developed.

Start young and give your dog plenty of positive experiences at that vet’s office.

However, if your Boxer has already developed a fear of the vet, it can be overcome.

The fear may well be due to a past negative experience, which may or may not have been avoidable.

Sometimes vets needing to treat a dog in an emergency have little choice but to resort to muzzling the dog and forcibly handling them.

This can leave your Boxer with some bad memories that may be triggered by people, particularly strangers in clinic type environments, go for their head or anywhere near their face, or attempt to touch or lift them.

Your dog may growl and even make like he’s going to bite.

It’s not uncommon for dogs to take a dislike to things being put in their ears, which can make it pretty much impossible for a vet to get an instrument close enough to examine a sore ear canal.

Paws can be another sensitive body part, usually as a result of a bad experience with nail cutting.

You can usually avoid this by handling your dog’s paws from a young age and throughout their life, and by using a grinder to maintain nails, rather than a cutter.

A Dremel grinding tool like the Dremel Lite 7760 Cordless minimizes the chance of ever nicking the quick, which can make dogs leery of anyone fussing with their feet.

If your Boxer hates his feet being touched due to previous negative experiences with nail trimming, you will need to replace the negative association with many positive ones.

How To Cut A Boxer’s Nails (Stress Free) At Home

If this fails, or in the meantime, there are alternatives to hauling your dog into the vet’s office.

Home visit vets who come to your house are increasingly available and can be a good idea in many ways.

If it’s the examination by a stranger that triggers the fearful reaction, you will still need to train your dog to be okay with being examined, first by you and then by people your dog doesn’t know.

It’s a gradual process that will take time and that you’ll have to take in stages as your dog gets comfortable with each step along the way.

Reward and distraction will be important.

Dispensing a steady stream of treats during the experience accomplishes both of these.

If your dog is thinking about the smelly sardines in your hand, he’ll have less bandwidth for worrying about what the vet is doing.

And the treats reinforce in your dog’s mind that his calm behavior will pay dividends.

This is one instance where it may be appropriate to allow someone other than yourself to give food to your dog.

If your dog associates the vet with delicious treats, you’re over the hump.

Healthy Treat Ideas For Your Boxer

How Not To Deal With Anxiety In Boxer Dogs

Medicating your dog, even with CBD oil, should be a last resort.

Some tranquilizers mask the symptoms of anxiety and even physically immobilize a dog so the owners feel better, but the dog’s experience may actually be made worse by feeling whoozy and “out of it”.

Anti-anxiety meds come with side effects and drugs are no substitute for proper training and management.

Scolding or getting angry with a fearful or anxious dog will only make the situation worse.

Your dog is not being “naughty” — he needs help to feel better.

Hoping He’ll “Grow Out Of It”

Hope is not a strategy.

Simply allowing your dog to suffer through it is not a solution and a lot of damage can be done if distress is allowed to persist.

It’s tempting to think a dog displaying distress when left home alone might fare better in the company of other dogs at daycare.

Daycare is questionable or all dogs, but is no place for dogs prone to anxieties or fear-driven behaviors.

If you have an anxious Boxer, don’t despair.

By distracting your dog from the upsetting stimulus, and replacing negative associations with positive experiences, you can help him shake his fears.