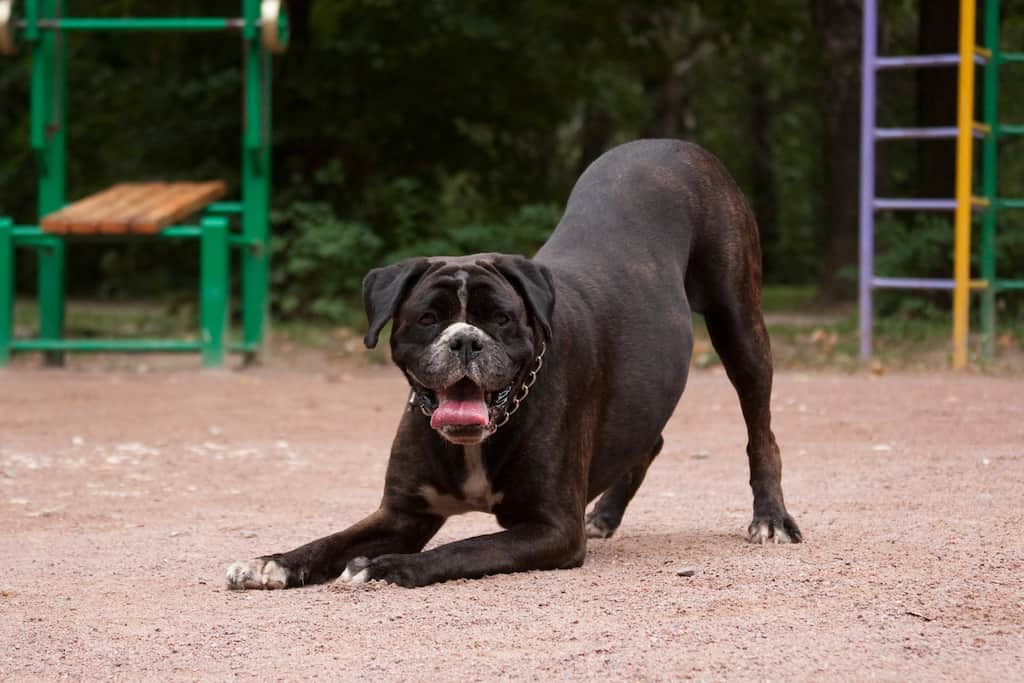 Our Boxers mightn’t speak English but they can get their point across perfectly well without words.

Boxers are expert communicators: play bows and tail wagging are just the start of the spectrum of body language they use to signal how they feel and what they want.

Sometimes it’s obvious and common to all dogs, but Boxer owners also learn to interpret other non-verbal cues that are more unique to the breed.

Boxers have no monopoly on the play bow.

It’s a canine classic that needs no explanation.

The bow — with elbows on the ground and butt in the air — is an invitation to play, usually directed at other dogs but also seen during playtime with humans.

Wagging is entry level dog behavior, but did you know Boxers use their tails for a variety of other functions on top of expressing mood?

The tail is an extension of the vertebral column and one important function is as a rudder when running.

At high speed, you will see Boxers with natural tails use them to steer and change direction.

Tails are also a major mode of communication between dogs.

A Boxer with a docked tail can be harder for other dogs to “read” at a distance, predisposing these dogs to muddied communication and potential conflict.

Sort of like how wearing a mask obscures the human mouth and makes it harder to tell what that eyes are saying.

Boxers still have their wiggle.

But, with a docked tail, it’s more difficult to see tail “set” i.e. whether the nub is being held high (can indicate alertness, interest, confidence or aggression) or low (a more vulnerable and protective tail posture) or neutral.

Researchers have studied tail wagging (true story!) and found even the degree to which the tail wags to the left versus the right conveys meaning.

Tail docking can have consequences for a dog that aren’t always immediately obvious, especially since we humans are oblivious to much of the communication that passes between dogs.

Why Do They Dock Boxers’ Tails?

How To Tell If Your Boxer Is Relaxed And Comfortable

Most of us know instinctively whether our Boxer is feeling good or when something is off.

A relaxed Boxer will display body language including:

This the kind of stance you want to encourage and reward when teaching a “Relax”, “Easy” or “Chill out” command, which can help counter hyperactivity in Boxers.

Proper socialization training will help get your Boxer used to a wide variety of situations without becoming overexcited, which can be one of the challenges of the Boxer temperament.

Note, rolling on the back in the presence of another dog is often misinterpreted by owners.

Far from being undesirable, showing submission by exposing the belly when meeting a new dog makes a harmonious interaction more likely.

It is typically seen in pups as a sign of deference to older dogs.

Far better than having your Boxer take a dominant role by standing over or getting in the other dog’s face, which is more likely to trigger a confrontation.

Signs Your Boxer Dog Is Feeling Stressed Or Tense

Recognizing when your Boxer is getting worked up is essential for heading off overexcitement.

Identifying the signs allows you to introduce a circuit breaker before that energy translates into undesirable behaviors like:

A tense or overstimulated Boxer will exhibit body language such as:

In a training context, this type of body language means a Boxer has gone “over-threshold”.

To ratchet the intensity down a notch, increase the distance between your dog and the source of the stimulation, or take a break.

Build composure and calm behavior before incrementally upping the degree of difficulty i.e. proximity to the thing your Boxer finds exciting.

You’re unlikely to get much sense out of an over-threshold Boxer and need to go back a step.

Signs of potential aggression in a Boxer dog range from the obvious like:

…to some behaviors that are often misinterpreted, such as:

If you’re seeing aggressive signals in your dog, it’s important to understand the causes of aggression in Boxers and what to do about it.

12 Causes Of Aggression In Boxers

Unchecked, Boxers with aggressive tendencies can become dangerous, a liability to themselves and everyone around them.

Are Boxers Considered A Dangerous Breed?

While a fixed gaze on an object of attention can signal your Boxer is entering the sway of his prey drive and about to give chase, staring can also mean other things.

Depending on the context, a Boxer may stare at his owner:

Boxers are big on eye contact — except when they’re overstimulated or having a bout of selective hearing.

Every owner soon discovers their gorgeous Boxhead can be hella stubborn.

You may find, for instance, that your Boxer throws himself theatrically on the ground and rolls around on the grass while all the other pups in your obedience class demonstrate their perfect heeling skills.

Why You Shouldn’t Get A Boxer: 12 Cons Of The Breed

A Boxer’s vocal communication is an extension of their body language.

While not typically barkers, Boxers make a range of Wookiee-like sounds.

Vocalization including growling, grumbling and other Chewbacca impersonations rarely indicates aggression in a Boxer, as some owners fear.

Rest assured, your Boxer is just talking to you.

This is another classic Boxer dog move.

Any low lying object at chin height will do.

Resting the chin is sometimes an expression of boredom, especially when coupled with a dramatic sigh and maybe an “Isn’t it time for a walk?” stare.

Signs Your Boxer May Be In Pain

Reading your Boxer’s body language becomes particularly important when it comes to his health.

It’s also against a dog’s survival instincts to show weakness.

To top it off, the breed can have a high pain threshold, so it may be hard to tell when something is wrong in the early stages.

As well as yelping, indications your Boxer may be in pain or discomfort include:

Deadly Bloat: Know The Signs & Causes
How To Cut Your Boxer’s Nails At Home (Stress Free)
Paw Licking: What It Means & How To Fix It
Air Licking & Jaw Snapping: It Could Be Acid Reflux
What Can I Give My Boxer For Pain?

You may have noticed your Boxer vigorously “wiping his feet” after doing his business.

This is scent marking.

Dogs have scent glands between their toes and they are trying to wipe their smell on the ground, kind of like an “I was here”.

Similarly, poop and pee are all ways your Boxer leaves his “calling card” for others to sniff and makes his existence — and his territory — known.

Wetting Self Or Peeing Unintentionally

Sometimes young Boxers may accidentally pee when their owners come home, or when meeting new people or dogs.

Involuntary urination in these contexts can indicate:

Most pups grow out of this.

One effective strategy is to engineer calmer greetings.

For instance, totally ignore your dog for a period after you arrive home, rather than showering her with attention.

Or, if the peeing happens when meeting others, instruct people to pay no attention to your Boxer.

No eye contact, no talking to him or about him, nada.

Once he’s calmed down, they can offer a calm pat without looking at him.

With repetition, this usually cures excitement-related or nervous peeing.

Peeing when excited or scared is distinct from peeing due to incontinence which tends to be associated with urine leakage when sleeping or at rest.

Incontinence has a variety of causes including spay incontinence and aging.

Incontinence In Boxers
How Neutering/Spaying Affects Your Boxer’s Health

It can also be iatrogenic i.e. caused by drugs like prednisone.

What Prednisone Did To An 18-Month-Old Boxer

The Zoomies And Other Quirks Of Boxer Behavior

Boxers are nothing if not characters.

Other quirks of Boxer behavior include leaning against you, sitting on other dogs (and people), “boxing” and pawing at things.

Not to mention the Boxer zoomies which are the stuff of legend.

What The Boxer Zoomies Mean

The Boxer behavioral repertoire can be a little different to the body language exhibited by other less flamboyant dogs.

You’ll notice that body language is remarkably consistent from Boxer to Boxer and you will readily spot the same moves in other wigglebutts you encounter.

Equally of course, your Boxer is constantly reading your body language, and there too he is expert.

At a certain point you may even come to the realization that your Boxer knows you better than you know yourself — and can predict what you’re going to do before you’ve even reached for the car keys or picked up the leash.