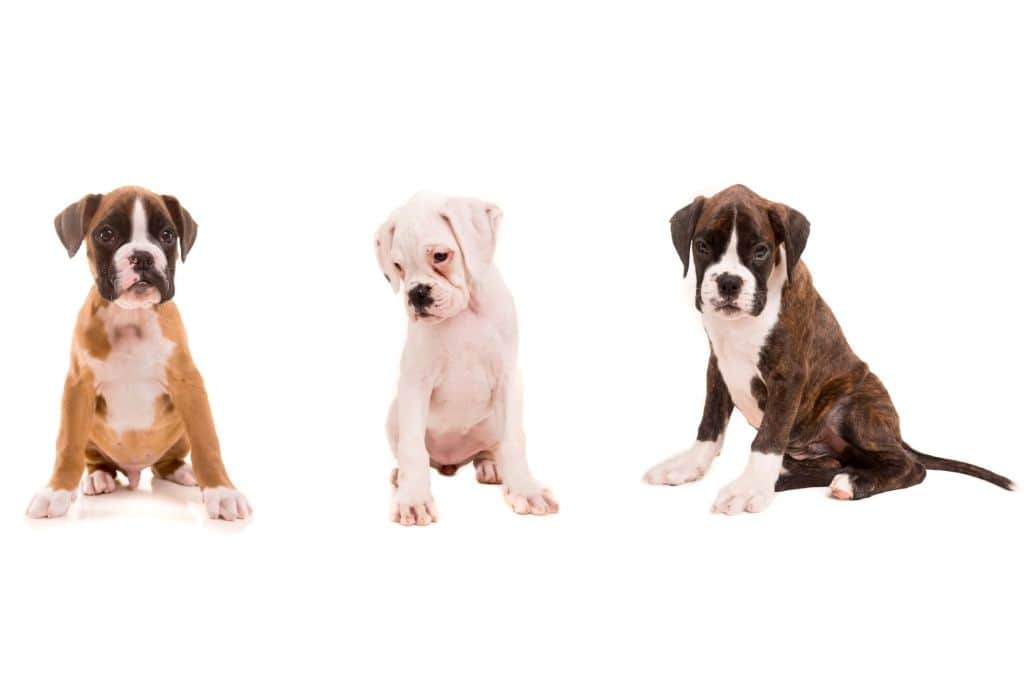 The Boxer coat is almost as recognizable as the deep chest and blocky head.

According to the official Boxer standard, Boxers come in three distinct colors: fawn, brindle and white.

As for the other colors, things are a little less straightforward.

White Boxers can now receive limited registration from the American Kennel Club but don’t conform to the official breed standard and for years were culled at birth because breeders saw them as so undesirable.

So called “black” Boxers are actually not black, but brindles with stripes so dense they almost completely obscure the background color.

Coat colors and markings are described within the Boxer Standard, which varies a little between countries but is written in the US by the American Boxer Club.

This doesn’t mean a dog that strays from this appearance is any less a Boxer.

The idea is that the standard is used by breeders when selecting Boxers suitable for mating, and by judges assessing dogs in competitions.

According to Boxer standards around the world, a black mask over the muzzle and around the eyes is essential.

White markings needn’t be present but are regarded as highly appealing when well placed.

A Boxer with prominent white markings on a significant portion of the coat is described as being “flashy” or having “flash”.

According to the American Boxer standard, flash is not necessary but, when present, should be “of such distribution as to enhance the dog’s appearance”.

White markings or flash can be on the:

“Unattractive or misplaced white markings”, such as on the flanks or back, are considered a fault.

On the face, “white may replace part of the otherwise essential black mask, and may extend in an upward path between the eyes, but it must not be excessive, so as to detract from the true Boxer expression.”

For showing, white markings must not cover more than one third of a Boxer’s coat.

Fawn Boxers range from light to dark and can have deeper burnished red tones.

Your fawn Boxer may be:

The Canadian Boxer standard states that the deeper hues are preferred.

Brindling refers to the pattern created by stripes running through a coat, parallel to the ribs.

The stripes are usually black on a fawn base, but can be red or dark brown or any shade that’s darker than the “ground” color.

The stripes can vary from sparse to very dense.

However, the English Boxer says “stripes contrast distinctly to the ground color, neither too close nor too thinly dispersed. Ground color is clear, not intermingling with stripes.”

Sometimes the brindling is so dense that the coat appears black with fawn streaks showing through … instead of fawn with black stripes.

This is known as “reverse brindling”.

Very dark reverse brindles may be called seal brindles (not “sealed” as some mistakenly say).

It’s even acceptable to call these Boxers “black” brindles.

All of the above variations are considered “brindle” when being shown and this is what their registration papers will say.

Look closely in sunlight and you will likely see that a Boxer that initially appears black actually has brindling.

While Boxers with black-like coats are increasingly sought after by many pet owners, calling a Boxer “black” will generally draw condemnation from those who breed and show Boxers.

This is because it’s genetically impossible for a Boxer to be black.

Breeders regard any reference to “black Boxers” as a hallmark of the dreaded backyard breeder, a term synonymous with disregard for breed standards, a lack of health testing and a raft of other bad practices.

There is no gene for black coat color in Boxers. (More on how color is inherited in Boxers below.)

So, if a Boxer appears black it’s either:

a) not a purebred Boxer

b) a reverse brindle when you look closely

The American breed standard emphasizes that the fawn background must still clearly show through in reverse brindle Boxers.

Disqualifications include “Boxers that are any color other than fawn or brindle”.

In Australia, the Boxer standard explicitly states that black ground color in a brindled coat is a fault, as is an entirely black dog.

So, owners seeking “black Boxers” and people deliberately breeding Boxers that are not just heavily brindled but solidly black are actually actively seeking to pervert the Boxer standard.

You can see why this might irritate breeders who’ve spent lifetimes carefully perfecting their dogs in order to meet that standard.

See also: The Curious Case Of The Black Boxer Dog. (Or Is It?)

White is a recognized color in Boxers, though dogs with more than a third of the body covered in white do not conform to the official breed standard and would be disqualified in the show ring.

Until recently white pups were killed by breeders at birth, creating the impression that the color is rare.

In fact, a quarter of all Boxers born to parents with white markings will be white.

These days white Boxers — also known as “checks” or “parti-coloreds” — are increasingly visible.

It wasn’t until 2016 that the American Boxer Club allowed white Boxers to be offered as pets, on the condition they’re neutered or spayed.

The ABC forbids the use of white Boxers in breeding programs.

White Boxers can, however, receive limited registration from the American Kennel Club, allowing them to compete in performance events.

Want to bring out the best in your Boxer’s coat?

Check out our 5 Best Brushes For Boxer Dogs.

How A Boxer Dog Inherits Coat Color And White Markings

What your Boxer’s coat looks like is governed by two sets of genes.

There are two genes for coat color, and another two genes that determine whether a Boxer will have white markings.

In Boxers, there are only two different genes for coat color: fawn and brindle.

A dog inherits one gene for color from each parent.

Brindle is dominant over fawn, so a Boxer inheriting one of each color gene .. will be brindle.

Since a brindle Boxer can carry a fawn gene that is not expressed in their phenotype (appearance) .. a brindle can produce fawn puppies if paired with a dog carrying at least one fawn gene.

How light or dark the brindling is depends upon “modifiers”.

Given fawn is recessive, a dog will need to inherit two fawn genes to be fawn.

Because every fawn dog carries 2 fawn genes, 100 per cent of the puppies produced by mating two fawn dogs will be fawn. It is the only genetic possibility.

White markings are decided by another two genes: solid coat and white.

Neither of these genes is dominant over the other, so one of each type will produce a combination effect i.e. a flashy Boxer.

However, even these Boxers do have some white markings on the toes, chest and belly.

As with coat color, other variables called modifiers affect how the genes for markings are expressed, so two dogs that are both genetically flashy can have wildly different white markings.

One might have white stockings, a necklace of white, a white blaze an white on the tip of the tail.

The other could have so little flash as to look exactly like a genetically plain Boxer.

Because the gene for white versus solid designates a “marking pattern” not a coat color as such, even a 100% white Boxer is always just a extraordinarily flashy fawn or brindle dog.

If your dog is totally white, you may never know whether he’s a brindle or a fawn underneath — unless both parents were fawn, in which case fawn is the only option.

On the other hand, if your white Boxer has a patch or two, the color of the patches will tell you whether he’s genetically fawn or brindle.

According to the official Boxer Standard, “The absence of white markings, the so-called “plain” fawn or brindle, is perfectly acceptable, and should not be penalized in any consideration of color.”

A plain mated with a white Boxer (if breeding white Boxers was permitted by the code that governs Boxer breeders) would produce 100 per cent flashy puppies.

However, because of the role of modifiers, it’s impossible to know for sure whether a Boxer is genetically plain or actually flashy.

In a pet Boxer, coat color matters not at all.

Whether a Boxer is fawn or brindle or white has no bearing on temperament or health, despite the misconception that white Boxers are more prone to disease.

When choosing a Boxer puppy, color is the least important consideration.

Why Your Boxer Should Eat Apples