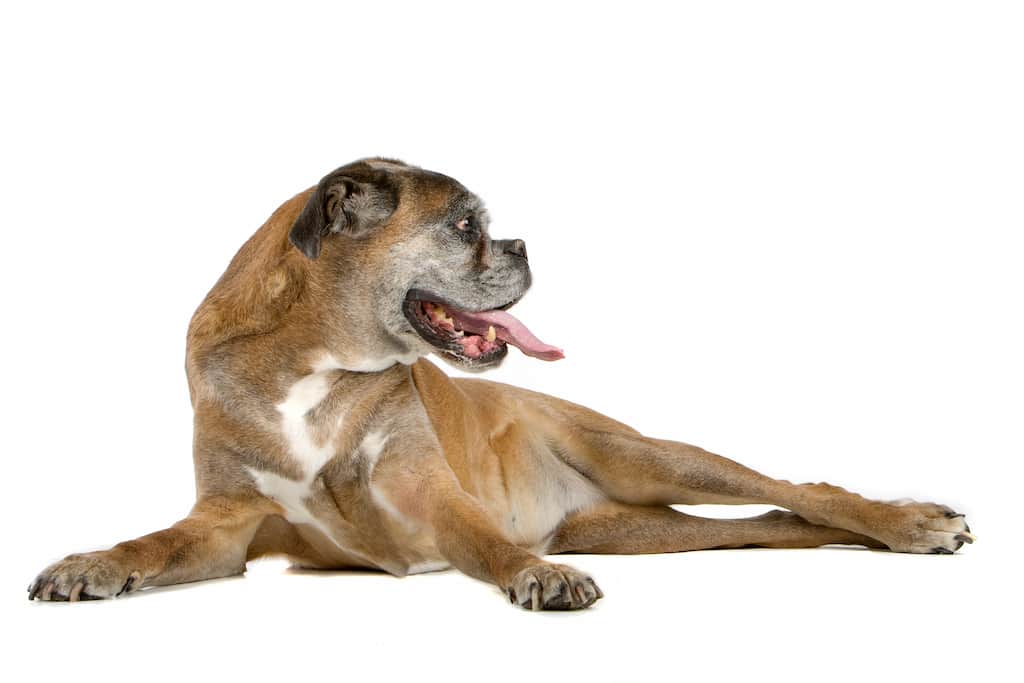 Considered an “old dog’s disease”, degenerative myelopathy (DM) is nevertheless a heartbreaking condition that progressively robs Boxers of their mobility and quality of life.

Degenerative myelopathy in Boxer dogs is a neurological condition similar to Lou Gehrig’s disease in people, that typically begins with rear end weakness but, over time, develops into full paralysis.

There is currently no effective treatment or cure.

However, in recent years, scientists have discovered a genetic basis for DM, allowing breeders to make choices that can protect future generations from developing the disease.

I am not a vet. This post is for general informational and educational purposes only. I encourage readers to see my full disclaimer here.

What Is Degenerative Myelopathy In Boxers?

Degenerative Myelopathy (DM) is a poorly understood disorder of the spinal cord.

It’s thought that a breakdown in the fatty sheath, called myelin, surrounding neurons (nerve cells) disrupts communication between the brain and nerves in the lower body.

One theory is that it’s an immune-mediated condition in which the immune system itself attacks the myelin.

Note that DM is not to be confused with a much more uncommon condition called progressive axonopathy that affects young Boxer dogs and progresses quickly.

The early symptoms of degenerative myelopathy are often so subtle as to be missed by owners.

It might be as slight as trouble jumping in the car, squatting to go potty or going up stairs.

Signs of early stage DM include:

These symptoms progress to:

The disease spreads through the central nervous system, damaging not only the spinal cord, muscles and nerves but the brain until eventually a Boxer with DM will experience:

Throughout it all, Boxers with DM remain mentally alert.

How Long Does A Boxer Live With Degenerative Myelopathy?

Progression of the disease is usually slow, but highly variable.

Some dogs are crippled within a few months. Others survive for three or more years.

The cause of death is usually euthanasia.

How Common Is DM In Boxers?

The gene mutation responsible for causing DM is widespread in the Boxer population.

However, a dog must inherit two copies of the mutation, one from each parent, in order to be at risk of developing the disease.

Boxers with only one copy cannot get DM themselves but are “carriers”, able to pass the condition to offspring if mated with another “carrier” Boxer.

When genetic testing for DM became available in 2009, some breeders found every dog in their breeding program tested “at risk” for the disease.

Of 4847 Boxers evaluated by the Orthopedic Foundation for Animals, as of December 2020:

Causes Of Degenerative Myelopathy In Boxers

While its exact etiology (cause) is unknown, DM now has an established genetic basis.

Being recessive, a dog must have two copies of the gene in order to develop the disease.

Having said that, the genes are just the starting point — not every dog with both copies of the gene mutation will develop DM.

How Is DM Diagnosed?

In its early stages, DM’s muscle weakness creates a staggering effect that can look like arthritis.

Before settling on a diagnosis of DM, vets must rule out other known causes of spinal dysfunction such as:

This process can be expensive and difficult, involving MRIs and other scans.

There is currently no cure and no treatment that’s been proven to work against degenerative myelopathy.

Research is focussed on slowing progression of the disease.

Dogs in the very early stages of DM can participate in clinical trials being run by the Missouri University Veterinary Health Center led by veterinarian Dr Joan Coates.

The trials are testing different approaches aimed at suppression production of a protein called SOD1, which is involved in the development of the disease.

What Age Do Boxers Get Degenerative Myelopathy?

DM is a late onset disease, usually striking Boxers around nine years of age, although it can arise anywhere from seven to 14 years.

Caring For A Boxer With Degenerative Myelopathy

Looking after a dog with DM is a heartbreaking and time consuming labor of love.

Though the condition itself is painless, having a weak hind end puts strain on other areas of the body.

Secondary pain in the neck, back, shoulders and front limbs may need to be managed.

One of the challenges is keeping a Boxer happy when his mind is fully active, but his body failing him.

Useful equipment may include:

Custom-fitted canine wheelchairs or carts for Boxers with DM can help restore mobility and independence, and many dogs adapt surprisingly well to them.

Should You Walk A Boxer Dog With DM?

Since muscle atrophy (wastage) is part of the condition, it’s generally advised to keep a Boxer with DM active as long as possible to help stave off the deterioration.

The DNA test for DM that became available in 2009 reveals whether a dog has none, one or two copies of the gene for DM.

Dogs will either test:

This information gives breeders a way to avoid producing puppies that can grow up to develop DM.

All they need do is avoid breeding carrier dogs to other carriers.

However, the diagnostic value of the DNA test for vets is limited, since not all dogs with A/A results will develop DM.

There is a second test that detects a “biomarker” or protein, which can help in early diagnosis of DM in individual dogs.

This protein, found in the cerebrospinal fluid, occurs at higher levels in dogs that are at risk of developing DM.

Do Breeders Exclude Boxers With The Genes For DM?

This presents a conundrum for breeders.

The gene for DM is so widespread in the Boxer population that if they bred only from dogs that tested clear (carried neither copy of the gene for DM), it would reduce the breeding population so significantly that it would drastically lower genetic diversity, thereby increasing the likelihood of other diseases that may be just as undesirable.

Instead, most breeders test their dogs, know their genetic status when it comes to DM, and only mate “carriers” to clear dogs.

This way, puppies can’t inherit two copies of the mutation and won’t suffer from DM — although some will be carriers.

How Can I Make Sure My Boxer Puppy Won’t Get DM?

You should always check the health test results for the parents of the litter from which you’re planning to choose a puppy.

You’ll find these registered with the Orthopedic Foundation for Animals and listed on their website.

You should also talk to your breeder about DM and what efforts they make to avoid it — and other diseases affecting Boxers.

These breeders include but are not limited to:

Other Breeds Affected By DM

DM was first recognized in German Shepherds in the seventies.

Now, Boxers are among 115 breeds, plus mixed breeds, that have been found to carry the mutated gene that causes DM.

With the advent of a DNA test for degenerative myelopathy, this condition is now avoidable by responsible breeders.

However, with many Boxers still carriers of the gene mutation, the danger is that puppies bred without health testing, and without careful matching of the parents, can and do still develop DM.

It’s perhaps one of the strongest reasons for giving “backyard breeders” a miss.