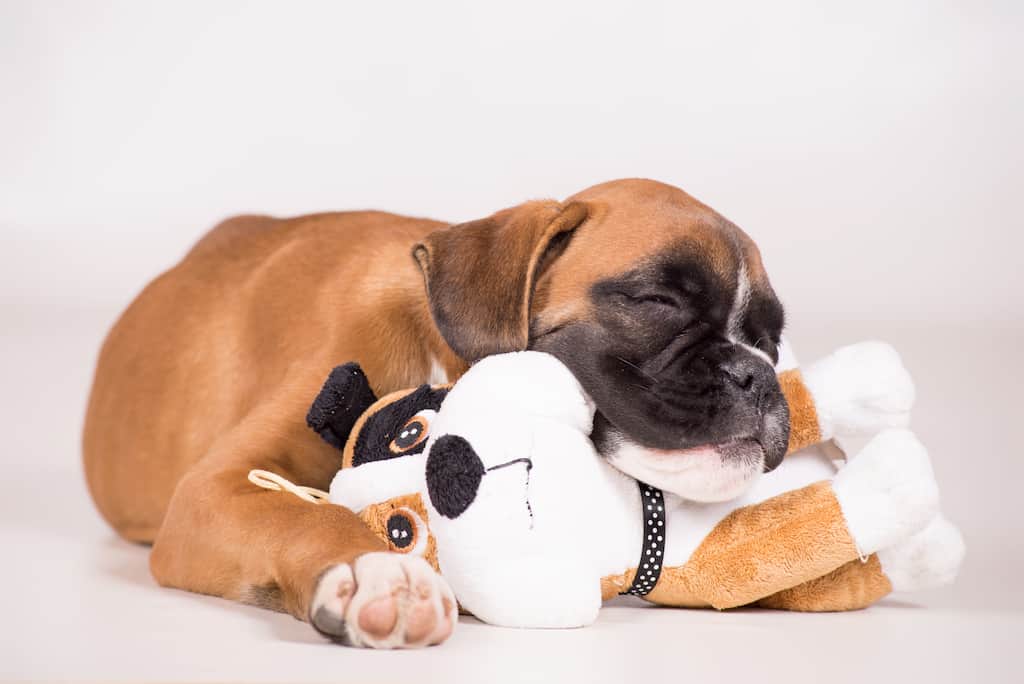 New dog owners sometimes worry when they notice their pup’s limbs jerking and quivering in their sleep.

Boxer dogs dream, just like people and often their legs will pedal or their noses twitch as they “chase rabbits” or follow scent trails across the landscapes of their minds.

Sometimes they’ll even yip, growl or wag their tails in their sleep, which can be pretty dang cute.

Dogs cycle through the same stages of sleep as humans including REM (rapid eye movement) which is when the most vivid dreams happen.

Scientists think that dreams are the brain’s way of processing experiences.

Proper sleep is essential for learning, giving the brain a chance to go over events and commit them to memory.

Studies have shown dogs perform new commands better after “sleeping on it”.

Non-REM sleep is important too.

It’s the type of sleep where muscle and tissue repair happens.

Signs A Boxer Dog Is Dreaming

All dogs dream — in fact it’s thought that most of the animal kingdom — at least most of the vertebrates — dream.

But — as in all things — Boxers can tend to be a lot more active, and a lot more vocal about it.

Your Boxer is probably dreaming if you notice:

What Do Boxer Dogs Dream About?

Your guess is as good as mine, but studies reading brain waves suggest animals replay events from their lives in their dreams.

So, if your Boxer is living a rich and interesting life with plenty of fun activities …chances are those kinds of things will make an appearance in his/her dreams.

Maybe your dog will dream about romping on the beach or learning that new trick … or about crunching on that fat, juicy bone that was the highlight of the week.

Just as in humans, even unpleasant dreams probably serve a purpose.

There is no need to wake your dog up.

Shortly s/he’ll likely cycle out of REM sleep and it will pass.

If your dog wakes suddenly and looks startled, simply give a reassuring touch.

How Your Boxer Dog’s Sleep Differs From Your Human Sleep

You will have noticed your Boxer naps throughout the day and can fall asleep in the car on the way home from the beach, sitting upright in the sun — virtually anywhere and within seconds.

That’s because dogs are “polyphasic” sleepers, which means they sleep in little bits here and there.

Humans, on the other hand, are “monophasic” sleepers, meaning we typically get all our day’s sleep in one go.

Though dogs get most of their sleep at night, like us, they also spend a good five hours during the day just resting.

Not necessarily asleep — but very nearly.

All up, dogs generally total about 14 hours a day either asleep or in a state of relaxed drowsiness.

This chilled out state is important to a dog’s health and psychological wellbeing.

A 2016 study of shelter dogs found those that got more rest during the daytime were generally happier and more relaxed.

One problem with sending a dog to a boarding facility like a daycare is the heightened level of arousal that dogs can remain in for extended periods throughout the day.

This isn’t the case for all dog daycares — good ones deliberately structure in periods of rest and low stimulation.

However, prolonged periods of overstimulation can be the norm in poorly-run facilities and for individual dogs that find daycare especially stressful or exciting.

This overwrought state can be responsible for the muted behavior owners typically observe in the evenings (and usually interpret as the dog having had a wonderful time).

In fact, it may be sheer exhaustion from having spent too much of the day “over threshold” — and it will take its toll on the dog’s mental state and physical health if allowed to persist.

Dogs cycle through the different sleep states much faster than humans.

The average canine stays asleep for only 45 minutes at a stretch, but the dog goes through two complete sleep cycles during that time.

Compare this to humans, who take one to two hours to go through a single sleep cycle.

Factors That Can Affect Your Boxer’s Sleep

However, we do know that a dog’s sleep is affected by a few things.

Whether Your Dog Is At Home Or Away

Research shows dogs are more likely to sleep deeply and dream when sleeping at home, as opposed to another setting like a boarding kennel or someone else’s house.

This makes sense, as dogs will feel the need to be more alert outside of their own territory.

Whether They Sleep Inside Or Outdoors

Dogs that sleep indoors typically sleep more soundly and get 10 to 20 per cent more sleep per night than outdoor dogs.

Whether You Are Present

If your dog feels safe and secure, he or she is more likely to fall asleep, and to enter REM sleep.

Sometimes it’s hard to tell whether a dog is in pain, as they tend to hide it.

Chronic pain, though, can disturb normal sleep patterns as well as sleep quality.

How Much Should A Boxer Dog Sleep?

Very young puppies need as much as 18 to 20 hours sleep per day.

By four months, most are sleeping about 11 to 14 hours.

At about one year old, dogs start to do most of their sleeping at night.

The average dog sleeps for about half of every day, from eight to 13 or so hours. Around 10 hours is most common.

Adequate amounts of quality sleep is important for a dog’s healthy and wellbeing, making them more well adjusted and emotionally stable.

84 per cent of dogs sleep stretched out on their sides.

Boxers, however, are masters of the “my dog is broken” sleeping positions.

It’s classic Boxer to sleep on the back, twisted around, legs splayed in the air.

Some can sleep half on, half off the sofa.

Many like to dangle their heads off the sides of the bed.

Lots of Boxers appreciate dog beds with bolsters to nestle into and rest the head upon.

As a brachycephalic (short-nosed) breed, it’s not unusual for owners to notice their Boxers snore at times.

As long as your dog is not having any difficulty breathing, a little snoring here and there is not necessarily a problem.

How To Help Your Boxer Sleep (And Dream) Better

Your Boxer will sleep better if you provide:

Check out our article “12 Features You Want In Your Boxer’s Bed”.

How Your Boxer’s Sleep Can Affect Yours

Scientists have actually looked at this.

They found that having your dog sleep in your bedroom is not disruptive to human sleep. (No puppies under six months were included in the study.)

That changes if the dog is actually on the bed.

When the dog is in the bed, the owner sleeps less well.

The twitching and jerking you see your Boxer do while asleep is a sign s/he’s dreaming.

Dreams are part of your dog’s normal cognitive functions, helping to assimilate experiences and consolidate learning.

You will no doubt come to love your slumbering pup’s little yips and tail wags.

Can Sleep and Resting Behaviors Be Used as Indicators of Welfare in Shelter Dogs? Sara C Owczarczak-Garstecka, PLoS One, October 12 2016

Differences in pre-sleep activity and sleep location are associated with variability in daytime/nighttime sleep electrophysiology in the domestic dog, Nora Bunford et al, Scientific Reports, May 8 2018