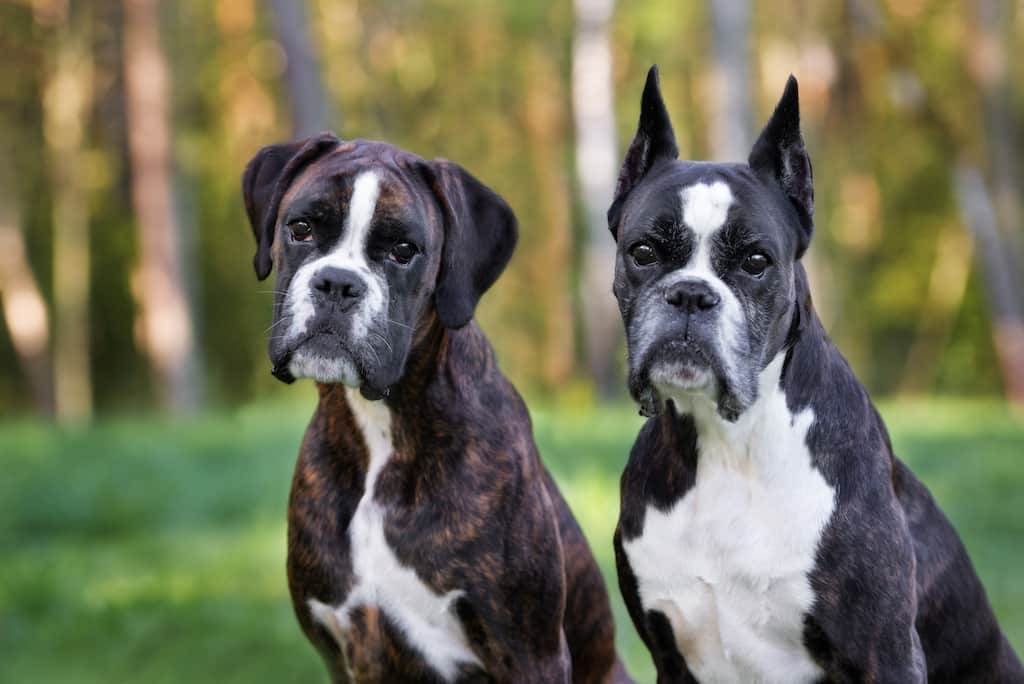 Ear cropping is a procedure typically performed by a vet when a Boxer puppy is between 8 and 12 weeks of age.

This is an elective, cosmetic surgery that involves cutting part of a dog’s ear off and stitching what remains so the ear stands erect instead of flopping naturally.

The original Boxer standard, adopted in Germany in 1902, confirms that the motivation for ear cropping is — and has been for at least the last 122 years — entirely aesthetic.

The literal translation from the German standard states, “This as well as the clipping of the tail is important because long ears give the dogs a sleepy expression which is very objectionable.”

Ear cropping used to be done to puppies before they left the litter, as tail docking still is.

These days many breeders leave the choice up to owners, who increasingly prefer the ears left natural.

Cropping, like tail docking, remains legal in the United States.

However, it has been banned in countries including Australia, the United Kingdom, Ireland, New Zealand, Russia, Italy, France, Sweden and many other parts of Europe including the Boxer’s homeland of Germany.

History Of The Boxer Dog
What Is The Difference Between German And American Boxers?

In the pro camp, the American Kennel Club considers it a “safe, accepted procedure that allows dogs to excel at the tasks they were bred to perform”.

The American Boxer Club bills itself as the national parent club “dedicated to the well-being of the Boxer breed” and is responsible for the written Breed Standard, a description of the ideal Boxer.

The ABC homepage leaves little doubt as to its preference when it comes to ear cropping.

Many others see ear cropping as an antiquated, barbaric practice that amounts to mutilation and socially sanctioned animal cruelty, perpetrated by the very people who should be most concerned about the wellbeing of dogs: their breeders.

In the UK, kennel clubs outlawed the procedure 100 years ago on animal welfare grounds.

No dog with cropped ears is eligible to compete in kennel club events.

But authorities are still trying to stamp out the practice.

This year celebrity dog breeder Simon Davis avoided jail but was banned from keeping dogs for the rest of his life after he was found guilty of cutting American Bulldog puppies’ ears to make them look “tougher”.

Sign up to receive a regular delivery of Boxer-specific:

..and more, direct to your inbox.

Even though the original German Boxer standard makes it plain that ear cropping is about looks, a range of other reasons are given by those who support the continuation of the practice.

Some might have held weight in previous eras when Boxers were primarily working dogs.

Others are plainly on very shaky ground, then and now.

I am not a vet. This post is for general informational and educational purposes only. I encourage readers to view my full disclaimer here.

Because “It’s How Boxers Look”

Maintaining the traditional Boxer look or “breed standard” seems to be what motivates most breeders to continue cropping puppies’ ears.

However, the official standard of the American Boxer Club does allow for natural ears:

“Set at the highest points of the sides of the skull, the ears are customarily cropped, cut rather long and tapering, and raised when alert.

If uncropped, the ears should be of moderate size, thin, lying flat and close to the cheeks in repose, but falling forward with a definite crease when alert.”

When Boxers were used primarily as hunting and guard dogs it was said that cropped ears were less easy for bears and wild boar and attackers to grab.

It was argued that removing the ear flap protected the dog from injury and allowed it to more effectively do its job.

Some contend floppy ears are more prone to ear mites and yeast infections, but there is no clinical evidence of this.

Many other breeds have floppier and furrier ears than Boxers and don’t have them routinely surgically altered on these grounds. Think of the Cocker Spaniel.

According to the AMVA, “although it is widely believed that pendulous ears increase the risk of otitis externa, there is a lack of strong scientific evidence establishing and quantifying the strength of this link.”

How To Clean A Gunky Boxer Ear
Boxer Dog Yeast: Causes & How To Fix

According to the American Kennel Club, cropping the ears will “enhance the Boxer’s hearing, thereby helping it perform its tasks to the best of its ability”.

It seems obvious that the ears a Boxer was born with will function perfectly well, as do the floppy ears of countless other breeds.

According to allboxerinfo.com, the Boxer bloodline has developed “uncontrolled” or uneven ears throughout the breeding process and so they must be surgically corrected.

As the site later points out, cropped ears don’t always come out as intended and can also be asymmetrical.

Note that surgical ear cropping for cosmetic reasons should not be confused with the ear taping and massage that’s done to train “flying nun ears” in Boxer puppies.

Reasons Not To Crop A Boxer Dog’s Ears

Just because something is commonly done, or has been done in the past, doesn’t mean it’s right, or should continue.

The British Veterinary Association describes ear cropping as a painful procedure, and says, “the trauma can have a significant psychological impact on the maturing dog”.

The puppy is anesthetized for the procedure but endures discomfort for several weeks while the ears heal.

During this time the ears are bandaged like antlers on the top of the head, or “posted”, and sometimes affixed to a cup to keep them straight.

The aftercare involves “stretching” the ears on day 10-12 post-op, at the point when the stitches are removed.

Breeder Cheryl Cates from Encore Boxers advises owners to “hold the edge of the ear between your thumbs and pointer fingers and gently squeeze and stretch to be sure that all the bumps are out of the edge of the ear. This will be a bit painful for the puppy…”

People for the Ethical Treatment of Animals says it’s more than a little pain.

“The process of taping and retaping a pup’s ears to force them to stand erect after they have been cropped can be agonizing for the dog.”

It Comes With Health Risks

Ear cropping is not taught in veterinary school.

The AVMA says “ear cropping and tail docking are not medically indicated, nor of benefit to the patient.

These procedures cause pain and distress and, as with all surgical procedures, are accompanied by inherent risks of anesthesia, blood loss and infection.”

According to Clermont Animal Hospital, a vet clinic in Ohio that considers ear cropping “a lost art — an art we are trying to preserve”, puppies are more sensitive to anesthesia than adult dogs because of their high metabolisms and low body mass indices.

Inexperienced vets can make mistakes and not cut off enough of the ear to give the desired shape, necessitating a second operation.

Note: no Boxer should ever be given the widely used drug Acepromazine as part of any anesthetic protocol.

It Is Unnecessary — Even For Show Boxers

While referred to as a “show crop”, a Boxer does not have to have cropped ears to be entered in shows, including American Kennel Club competitions.

It Serves No Purpose In A Pet Boxer

The overwhelming majority of Boxers are companion dogs and so the historical reasons for cropping their ears (i.e. to stop vicious hunted animals grabbing them) arguably no longer apply.

Other Breeds That Historically Had Their Ears Cropped

The AKC currently recognizes 20 breeds with cropped ears. Some commonly cropped breeds are:

Like ear cropping, it remains legal in the US but has been banned in many other countries.

One misconception about tail docking is that it’s done to prevent tail injuries like “happy tail” which can affect Boxers with undocked, natural-length tails.

Why Boxers’ Tails Are Docked

Boxers only have front dewclaws, not rear.

Dewclaw removal is often said to be done to prevent these digits catching on things and being torn.

However, it’s increasingly understood that dewclaws are connected to tendons and muscles and serve a function in balancing a dog’s motion.

There is evidence dewclaw removal can predispose a dog to injury and joint problems.

Highly controversial, this procedure is used when training methods have failed to stop problem barking.

Supporters say it helps the dog by keeping them in a home when they might otherwise be abandoned to a shelter because of noise complaints.

Make sure your breeder knows before your puppy is born that you do not want your Boxer’s ears cropped or tail docked.

Can A Boxer Dog Live Outside?

How To Fix Tear Stains In White Boxer Dogs