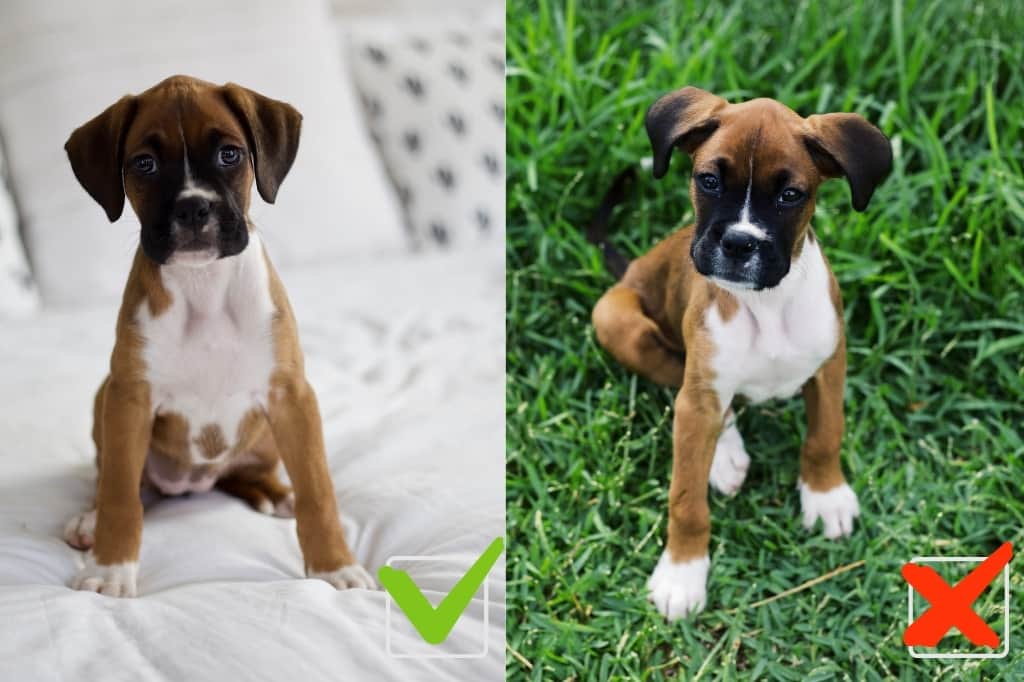 Occasionally, a Boxer puppy’s ears will start to “fly” or flip back and hang away from the side of the head, rather than sit in neat triangles framing the face.

The problem usually coincides with a puppy’s second teething, as the adult teeth begin coming in.

Ear “taping” is a practice some breeders advocate in order to remedy this issue.

By fixing a Boxer’s ears into the correct position with tape while the pup is still young, and the ear cartilage soft, the ears can be “trained” to sit where they should.

Note: Ear taping refers to the procedure performed on natural ears, as distinct from ear “posting” which is done after a Boxer’s ears are surgically cropped.

What Are “Flying Nun” Ears In Boxers?

Most Boxer puppies grow up to have naturally perfect ears, without you doing a thing.

However, some puppies’ ears “go wonky” during teething.

For most Boxers this is around five months of age but can happen anywhere from four to eight months.

These wayward ears are sometimes described as “flying nun” ears, for the resemblance they bear to headpiece worn by Sally Field in the sixties sitcom about a nun who could fly when the wind caught the large headpiece of her habit.

Flying ears may pop up or curl back, sometimes opening to show the rosette of the inner ear.

This is described as “rosebudding”.

One or both ears can be affected.

Flying ear carriage creates a very different effect to when a Boxer’s ears sit flat against the head, and detracts from the classic Boxer look.

Do My Boxer Puppy’s Ears Need To Be Taped?

If you notice your Boxer puppy’s ears constantly folding back, you have three choices:

One theory is that the body pulls calcium from the ear cartilage to help with teeth formation, causing the ears to lighten and “fly away”.

However, there is a school of thought that the underlying cause is small ears and improper ear placement as a result of poor breeding.

By this rationale, quality dogs will naturally have proper “head set” and good ear carriage. Ears shouldn’t be taped because it’s a”cheat” that serves to mask and perpetuate a genetic fault which should rightly be addressed at the gene level.

Does Taping A Boxer’s Ears Work?

Breeders who use taping admit that some “stubborn” ears — usually ones that are small and have strong cartilage that’s less able to be reshaped — will always “fly”.

In these cases, no amount of taping will deliver a permanent fix … although it may provide a temporary effect the night before a dog show or event, something akin to putting a woman’s hair in rollers before a big night out.

Afterwards, the ears will fall right back where they were.

When Can You Tape A Boxer Puppy’s Ears?

The consensus amongst those who tape ears is that the earlier it’s done, the better.

If flying ears are not resolved by the time a Boxer is one year old, they will likely remain that way for life.

Others advise the window of opportunity is even shorter, and recommend fixing the ears before teething finishes, often around six or seven months of age.

How Long Do Boxer Ears Need To Be Taped?

Some breeders recommend leaving the tape in place for four to six days.

Others are only comfortable with two days at a time, citing the possibility that restricted air flow in taped up ears can lead to ear “infections”.

It’s possible that a single taping for 48 hours will be enough.

Usually, though, it takes several applications of tape over a few weeks.

Sometimes it can take months.

How To Tape A Boxer’s Natural Ears

There are several techniques.

The “bonnet” method folds the ears then pulls them down with a strap under the chin, so that the pup looks like he’s wearing a snug bonnet.

With the “felt to felt” method, the sides of the ear are rolled together like a burrito and secured with a band of tape in the middle of the ear, like curtains tied back with a sash.

This style is said to allow better air flow than the bonnet.

The approach chosen typically depends on which part of the ear is problematic.

Felt to felt may be enough for mild cases, whereas more recalcitrant ears may need the bonnet.

Ears should be monitored closely and the tape immediately removed if there’s any redness, irritation or odor.

Is It Necessary To Tape A Boxer Dog’s Ears?

Flying ears are a purely aesthetic issue, of most concern to those intending to show their dogs.

Regarded as a “conformation fault”, or undesirable physical trait, ears that don’t sit neatly are liable to be penalized by judges in the show ring.

Even in pet dogs, “well set” ears frame the face, setting off the squareness of the Boxer head.

Though all Boxers are adorable, ears that sit properly are arguably more attractive.

According to Raevon Boxers, a Boxer’s ears will usually sort themselves out by adulthood, provided they are the right weight and texture to start with.

The Australian breeders say the small ears that tend to fly were more of an issue in the sixties and, happily, arise less frequently today.

Is Taping A Puppy’s Ears Cruel?

Breeders who advocate this practice say the puppies experience only “light pressure”.

They say the right kind of tape doesn’t pull out hairs when removed.

At first your puppy will want to paw the tape off but with sufficient distraction, such as a raw meaty bone, he’ll soon tolerate it.

It’s important with the bonnet method to make sure the strap under the chin is loose enough to allow two fingers in, but not so loose that a paw could get stuck.

Dogs with taped ears should be supervised 24/7 for safety.

Alternatives To Taping: Using Massage To Train A Boxer’s Ears

Daily massage can “break down” the cartilage in the ear, softening it enough to allow the ear to reposition.

Here is a guide for how to do the massage.

If repeated daily as soon as an ear starts to fly, massage may avert the need for any taping.

And your pup will enjoy the ear rub.

What Other Breeds Have Their Ears Taped?

Flying ears are not just a Boxer thing.

Many other breeds encounter the same issue and it’s addressed in the same way, with ear taping.

Breeds susceptible to flying ears include many “Molosser” style dogs, including many bully breeds and mastiffs descended from ancient Greece, such as:

Taping a Boxer’s ears is a minimally invasive intervention compared to procedures like tail docking and ear cropping.

Correcting ears that fly is not necessary for a Boxer’s health and purely motivated by aesthetics.

However, if done properly, taping should cause no pain and little bother to a puppy.

It may last as little as a few days, for a lifetime result.

Taping doesn’t always work — and it may be unnecessary.

Massaging a pup’s ears daily during teething can often achieve the same effect.

Even a well-bred Boxers’ ears go temporarily askew during teething but then come good on their own by the time the dog reaches adulthood.