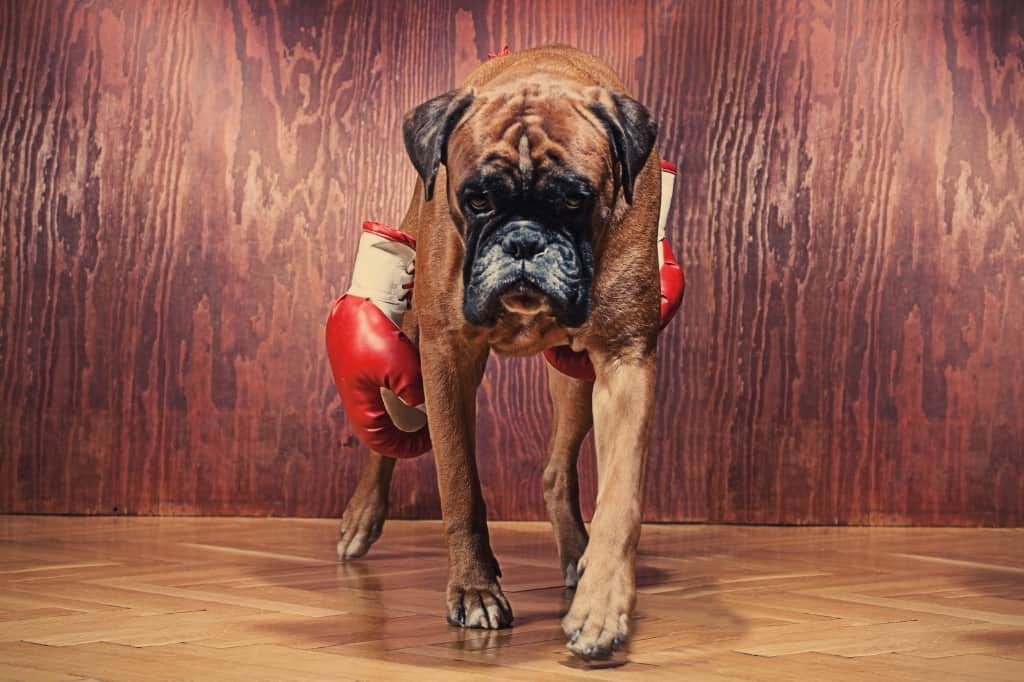 Boxers have long enjoyed a place as one of the most loved breeds in the United States.

Yet, despite their popularity, many facts about Boxers are little known or misconstrued — even by longtime owners.

Here are 7 essential facts any self-respecting Boxer owner should have down pat.

1. Boxers Are A “Brachy” Breed

Brachycephalic breeds are those with short or “squashed” noses.

The jaw is compressed, the muzzle short and the skull compact.

It’s part of what gives the Boxer his distinctive look.

However, the compaction of the nasal and other upper respiratory structures like the soft palate and the larynx is what gives rise to breathing difficulties in some brachycephalic breeds, particularly English and French Bulldogs.

Due to extreme breeding practices to create a certain physical appearance at the expense of health, these dogs increasingly require surgery to correct BOAS or Brachycephalic Obstructive Airway Syndrome.

They are susceptible to overheating — especially when it’s hot and humid.

Dogs can also be doclichocephalic which means a round head with an elongated snout, as seen in Greyhounds.

The third classification is mesaticephalic, or “medium” muzzled.

In these dogs the skull and snout are about the same length.

Labradors are a classic example.

Boxers are a slow-maturing breed.

They don’t stop growing until around 18 months to 2 years old and are not considered fully mature until at least 2 or even 3.

This has implications not just for behavior and training but for neutering.

It’s healthier for a dog to retain their sex organs, which produce hormones that have a protective effect on overall health.

If a Boxer must be neutered/spayed, the latest recommendations are that it should not be contemplated before the age of 2.

This is why neutered Boxers are taller than intact ones but the more serious problem is that the distorted bone growth can lead to joint problems later in life.

Until they’re past 2 years of age, don’t let Boxers do high impact activities like:

A common rule of thumb is to add 5 minutes of activity per month of life, which equates to a lot less exercise than most owners think.

By this measure, an 8-week puppy needs only 10 minutes a day of physical activity per day.

It can be a challenge to keep a young Boxer still but put the emphasis on mental stimulation and play sessions where the activity is stop-start and breaks determined by your pup.

This will protect the still-forming bones and joints and make for a more mobile, active and pain-free adulthood .. not to mention the senior years.

Tail docking and ear cropping are controversial practices, hangovers from the past.

There may have been some justification for tail docking when Boxers were used as hunting dogs used to hold down wild animals like bears which might have been able to grab a long tail.

But the original Boxer standard adopted in Germany 1902 reveals that ear cropping has never had any purpose other than aesthetics.

The translation from the German states, “This as well as the clipping of the tail is important because long ears give the dogs a sleepy expression which is very objectionable.”

The tradition became written into the breed standard in the United States, where a variety of spurious reasons circulate amongst Boxer owners, most without any basis in fact.

In modern pet Boxers both tail docking and ear cropping are wholly cosmetic surgeries, done so that dogs conform to owners’ notions of what a Boxer “should” look like.

Despite claims otherwise, the amputation procedures are painful for the puppies and can impair both physical and social functioning.

Ear cropping and tail docking remain legal and common in the United States.

But this is out of step with the rest of the world.

Both practices are now banned on animal cruelty grounds in many European countries including in the Boxer’s homeland, Germany.

In Australia, too, long tailed, natural-eared Boxers are the norm.

In the United Kingdom only a vet can dock a dog’s tail and the Royal College of Veterinary Surgeons regards tail docking as “unacceptable mutilation”. Ear cropping is illegal.

4. Only A Small Number of White Boxers Are Deaf

Despite popular misconceptions, white Boxers are no more prone to health problems than brindle or fawn Boxers — except for deafness.

5 to 8 per cent of white Boxers are completely deaf.

As many as 13 per cent of white Boxers are deaf in one ear but this is generally so slight an impairment that owners don’t even notice.

Deafness in Boxers is caused by a lack of pigment in the inner ear.

Selective hearing is a breed characteristic, regardless of coat color!

5. Boxers Should Not Eat From Raised Bowls

Many owners have their Boxers eat from raised bowls, thinking it reduces the risk of their dogs developing gastric dilatation-volvulus or GDV.

In the past, the recommendation was to raise food bowls to reduce the chances of bloat but the latest information suggests that’s a mistake.

Current advice is just the opposite: always feed Boxers from the ground as raised bowls have been associated with an increased incidence of bloat.

A 2000 study blamed raised bowls for more than half of all bloat cases in giant breeds and for 20 per cent of cases in large breeds.

Veterinarian Dr Jerold Bell told the Canine and Feline Breeding and Genetics Conference in 2003 that raised bowls more than doubled the risk of bloat.

So keep your Boxer’s bowl on the floor and update your Boxer-owning friends!

Kibble consumption is another factor that’s been shown to make bloat more likely, another reason to ditch dry dog food in favor of a fresh, natural canine diet.

Learn more about How To Prevent Bloat In Boxers

“Black” Boxers are a touchy topic in Boxer circles.

Boxers that appear to be solid black are either not pure Boxers or, when viewed in the sunlight, are actually just very dark brindles, also known as reverse brindles.

These dogs are called “seal” brindles when the black effect is particularly strong.

(Note that these dogs get called “sealed” brindles, but the correct term is “seal”.)

Black-appearing Boxers are sought-after by some owners but regarded by breeders and those who show Boxers as a deliberate distortion of the breed standard.

The American standard specifies that the fawn background must show through in reverse brindle Boxers.

Disqualifications include “Boxers that are any color other than fawn or brindle”.

In Australia, the Boxer standard explicitly defines an entirely black coat in Boxers as a fault.

And for the record, all white Boxers are genetically either brindle or fawn, just with overpowering white markings or “flash”.

Boxers can engage in some destructive chewing with the best of them, but we don’t generally think of them as biters, or as aggressive.

Not everyone shares this impression of the breed.

According to the California-based personal injury attorneys Bisnar Chase, Boxer dogs have one of the top five strongest bites of all domestic dog breeds, with an estimated bite force of 230 PSI (pounds per square inch).

The dog with the most powerful jaws is the English Mastiff, with a bite force of 550 PSI.

Historically, the Boxer was used in hunting and in the bloodsports of bull and bear baiting .. the short muzzle and underbite deliberately bred to allow dogs to clamp their jaws around their targets.

Between 1982 and 2014 in the United States, Boxers were responsible for the 8th highest number of dog attacks, after Pit Bulls with the unwelcome distinction of first place, followed by Rottweilers, German Shepherds, Presa Canarios, Huskies, Wolf Hybrids and Labradors.

Boxers have unfortunately been responsible for a very small number of fatal attacks on humans.

Armed with facts about the breed, you’ll be in the best possible position to give your Boxer the kind of care he deserves.

… Especially if you understand not just the what but the why.