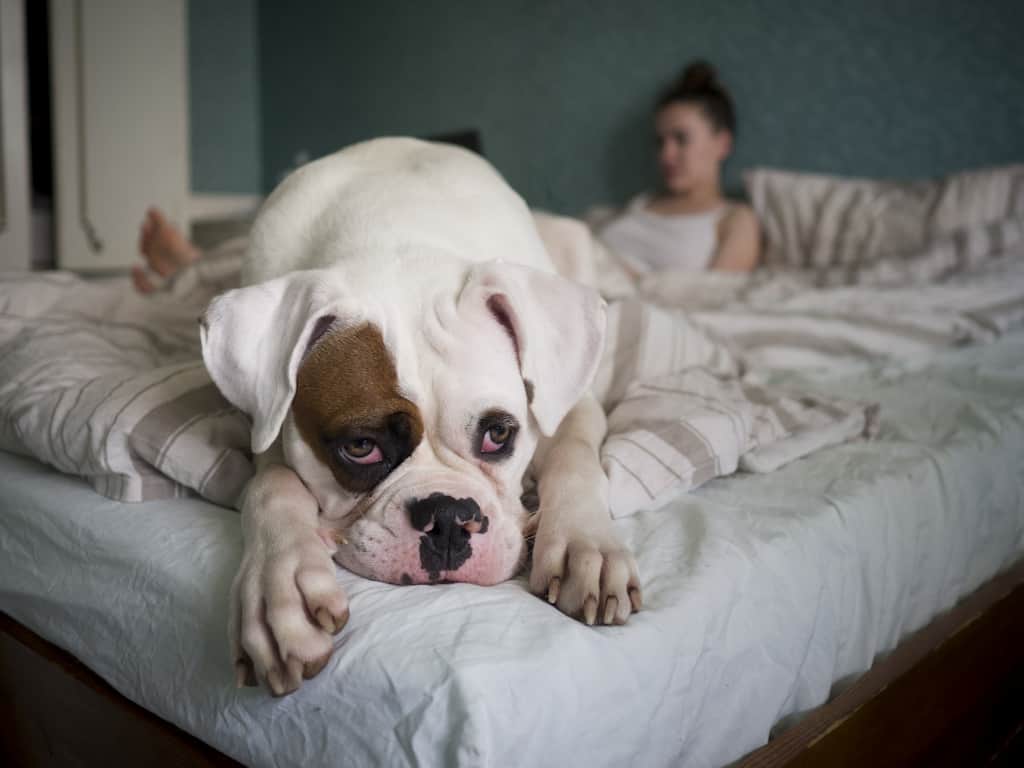 A fear of thunderstorms can cause a Boxer unnecessary distress on a scale from anxiety to agitation and total panic.

Thunderstorm phobia in Boxers can be a combination of factors including natural instinct, poor socialization to loud noises and discomfort triggered by static electricity.

Fear of loud noises like storms can be managed without medicating your Boxer, using natural methods, counterconditioning and desensitization techniques — we’ll outline 7 ways in this article.

What Is Thunderstorm Phobia In Boxers?

Thunderstorm phobia in Boxers ranges from anxiety to full-blown terror, characterized by excessive levels of panic and an irrational, hyperactive response to the weather event.

Fear is alarm or agitation in response to a stimulus, like a thunderclap.

Anxiety occurs in anticipation of danger or due to a memory of past danger.

Thunderstorm reactions involve both fear in response to specific noises and then anxiety in anticipation of the next noise.

Fear and anxiety can combine to whip a Boxer into a state of increased reactivity, where they are “overthreshold” and not thinking straight.

Signs Your Boxer Is Afraid Of Storms

Boxers show fear and anxiety in their facial expressions and body posture.

More overt signs include:

In extreme cases, Boxers in the grip of terror may:

Why Is My Boxer Scared Of Thunderstorms?

Storms expose our Boxers to a number of unfamiliar sights and sounds, including:

Your Boxer has very sensitive hearing that may amplify these sounds.

But there could also be a number of unseen, unheard aspects to storms that humans don’t notice but which dogs perceive, such as:

Boxers and other dogs may feel discomfort associated with the electrical energy that comes with storms.

Static electricity which can build up on a dog’s fur, creating a strange sensation and even delivering little shocks.

This phenomenon of “tingle voltage” was first detected in dairy cows that were unable to release their milk when affected by storms.

This static charge might explain why dogs tend to hide from storms in “grounded” areas like bathtubs, showers and behind toilets.

The Boxer breed temperament, with decent doses of excitability and sensitivity, may also play a role in thunderstorm anxiety.

Causes Of Thunderstorm Phobia In Boxers

To a certain extent, it is natural instinct for your Boxer to fear loud noises.

The response of running to seek shelter would have served an evolutionary purpose in protecting dogs from threats.

But outsize reactions that persist, despite cues from the owner that all is okay, represent a behavior problem.

Several factors can predispose your Boxer to a fear of storms, including:

Research has found that male dogs that have been neutered display more fear-based behaviors than their intact peers, including fear of loud noises.

This is in line with a rise in behavior problems overall in neutered dogs, including more aggression — contrary to what most people believe — and more unwanted sexual behaviors.

Noise sensitivity is a symptom not infrequently associated with a syndrome called Rabies vaccinosis.

Boxers that develop a fear of storms for no apparent reason may have experienced a traumatic event unbeknownst to the owner.

Perhaps lightning hit the house once during a storm when your pup was home alone.

If you have a rescue, perhaps the previous owners once left the dog outside during a wild storm.

It’s possible the previous owners were themselves afraid of storms and instilled this fear in the dog as well.

The fact that thunderstorm phobia is unusual in puppies suggests there is an element of learned behavior.

The absence of a fear response in pups also provides a window to very effectively “storm-proof” dogs when they’re young.

This can be done by exposing pups to progressively louder recordings of thunderstorms (and other potentially frightening sounds) via desensitization reels made for the purpose.

Good breeders will protect whole litters from developing noise phobias later in life via proper early socialization that includes exposing them to these sounds at low level from the first weeks of life — ideally from week two to four, when a pup’s eyes and ears are open but they’re yet to develop any sense of fear.

Sights and sounds Boxer puppies encounter at this age will be slotted into their mental library, filed firmly under the category of “normal” and nothing to be feared.

If your breeder hasn’t done this, you can still achieve it, as part of your Boxer puppy’s socialization.

The key is to start as early as possible, but with an awareness of a Boxer’s growth and development stages.

As a rule, there is a growing tendency to respond fearfully to new situations once a puppy is beyond 12 weeks of age.

However, the first of two “fear periods” can occur right at the time your Boxer puppy comes home, between eight to 11 weeks of age.

During these sensitive windows of development, a single negative experience can have lingering repercussions.

If your Boxer is already an adult, you can still reprogram a fear of storms – it will just take a little more time and patience.

How To Relieve Your Boxer’s Fear Of Thunderstorms — 7 Tips

Now let’s get to the solutions!

Overcoming thunderstorm phobias in Boxers is a matter of desensitization and counterconditioning.

Things you can do include:

Dogs take their cues from us.

If we display signs something is wrong, they will pick up on this and feel uneasy.

A comforting pat is okay but don’t reinforce your Boxer’s fear with a lot of attention, petting or baby talk.

Consoling is likely to be interpreted by your Boxer as either:

Make sure the attention you give your Boxer when he’s acting fearful is in the form of normal activities like playing or giving him a brush.

Counterconditioning means re-associating something negative with something positive, to rob the original thing of its power to frighten.

This is what you’re doing if you give your Boxer a raw meaty bone to chew during the storm.

It will not only distract him from the noises, but if you do this every time there is a storm, he will come to connect the two things and anticipate something good each time the weather gets wild, instead of something bad.

Alternatively, you can bring out your Boxer’s favorite toy only during thunderstorms.

Whatever has enough value for your dog that it will draw his attention away from what’s going on outside.

Turn on a fan or TV, radio — anything that blocks the noise.

Don’t just add to the cacophony — go for sounds that are soothing and convey a sense of ordinary life going on.

You might also change location to somewhere in the house where the noise from outside is more muffled.

A basement or room without windows might be a good place to be.

This might be access to a basement, as above, or perhaps it’s simply your Boxer’s crate, covered with a blanket.

Be sure to leave the door open as confinement can exacerbate panic.

A thundershirt is a snug vest designed to create a soothing effect similar to swaddling in human babies.

They’re so comforting to some dogs that they even drift off to sleep mid-storm — an ideal result.

As discussed earlier, a very effective way to desensitize your Boxer to storms is to practice.

Storms happen infrequently so you have to stage it.

Make a recording of thunderclaps and storm sounds and play the sounds in the background of daily life, when your Boxer is relaxed and comfortable.

Start at very low level, almost inaudible to you.

Gradually increase the volume over many sessions — weeks or months — until your Boxer doesn’t bat an eyelid at the sounds, full throttle.

If your Boxer ever struggles, turn down the sound back to the last level he was fine with and progress more slowly.

This approach is sometimes paired with a cue word like “Relax” and treats for doing so.

If you know a storm is coming, take the chance to get out and give your Boxer a good walk or play session.

This will tire him out, mentally and physically, and a tired dog is much more likely to relax.

How Not To Treat Thunderstorm Anxiety In Your Boxer

A few things to avoid when trying to help your Boxer include:

Owners sometimes use over the counter medication like Benadryl for its drowsy effect.

Note that the commonly prescribed sedative Acepromazine should never be given to Boxers as it can cause potentially fatal adverse reactions.

Pharmaceuticals as a response to thunderstorm phobia should be an absolute last resort and will not be necessary in most cases.

While they mask symptoms and reduce the appearance of anxiety, they do nothing to address your dog’s fears.

If all other measures have failed, holistic vets can help with less toxic treatments that may be able to help calm your Boxer, without the risk of harmful side effects.

Holistic vets advise that treatment of every vaccinated dog that’s experiencing thunderstorm anxiety should start with homeopathic remedies to balance likely vaccinosis as the cause (as mentioned above).

Even in unvaccinated dogs, intergenerational baggage from vaccines administered to the parent can be passed down.

Homeopathic remedies for thunderstorm phobia garner mixed reports but include:

Punishing a fearful dog will only ratchet up the anxiety.

The behavior your Boxer is exhibiting while in a state of fear and high arousal, while problematic, is effectively beyond his control.

It will be a process to overcome it, but punishment has no place.

Rubbing your Boxer’s coat with a dryer sheet or applying other anti-static products is one home remedy touted for thunderstorm anxiety.

The idea is it alleviates static electricity in the coat.

The problem is dryer sheets, even unscented ones, are impregnated with chemicals that you don’t want on your Boxer’s coat, where they can absorb into the skin or be ingested during grooming.

DAP is a synthetic version of the pheromone secreted by lactating female dogs, responsible for the sense of wellbeing experienced by puppies when with their mother.

These collars and plugins are sold under the brand name Adaptil.

A 2015 study, funded by the company that sells Adaptil, credited their products with a significant reduction in fear and anxiety and an improved ability to settle in the face of disturbing noises.

Here again, the concern with these products is that they expose your Boxer to synthetic chemicals.

Other Noise Phobias In Boxers

Boxers can be frightened by other loud noises, with typical examples being:

The same approach as with thunderstorms can be taken to overcome fears associated with these noises.

Fear of storms can curtail a Boxer’s enjoyment of life and put his safety at risk.

With proper guidance and the use of things like thundershirts and distraction to desensitize and recondition, a Boxer can learn to cope with thunderstorms and eventually not worry about them at all.

Cottam, Nicole and Dodman, Nicholas H, The effectiveness of the Anxiety Wrap in the treatment of canine thunderstorm phobia: An open-label trial, Journal of Veterinary Behavior, 2013

Dreschel and Granger, Physiological and behavioral reactivity to stress in thunderstorm-phobic dogs and their caregivers, Applied Animal Behaviour Science, 2005

Puotinen, CJ, Is Your Dog Afraid Of Thunder? The most comprehensive list of remedies for noise-phobic dogs, Whole Dog Journal, 2019