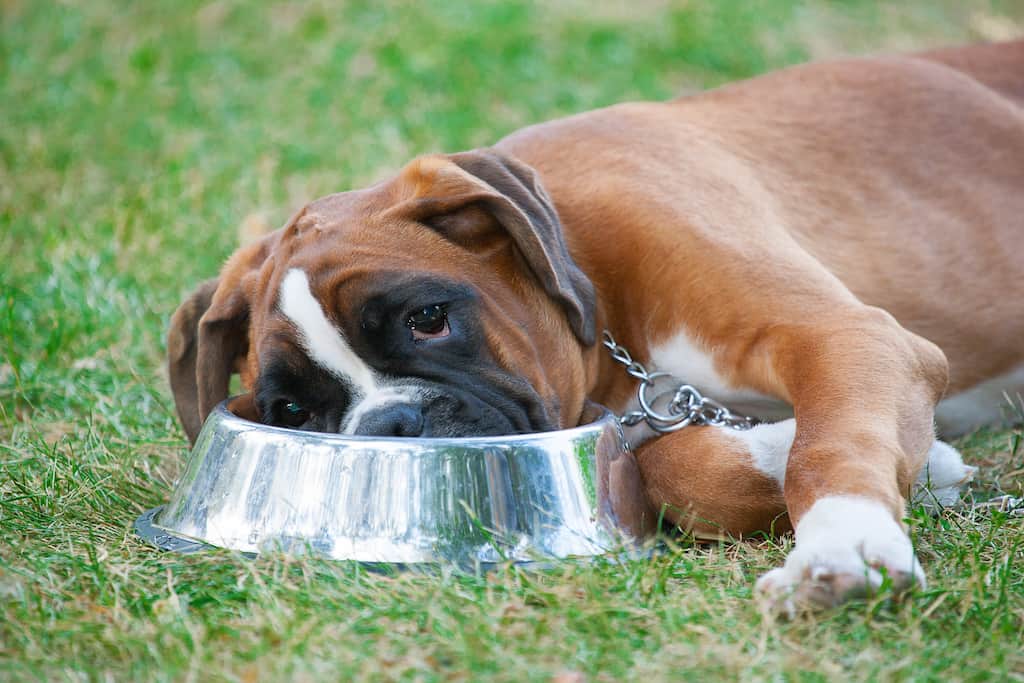 It is perhaps one of the biggest misconceptions about Boxers that they are prone to food allergies.

If you are being told — including by conventionally-trained vets and expensive saliva tests — that your Boxer is allergic to certain foods, first consider whether you are feeding a fresh, natural canine diet based on raw meaty bones.

Before you lumber your Boxer with an allergy diagnosis and embark on the wild goose chase of an “elimination diet” or switch your dog’s kibble yet again, this time to a “novel protein” or a “prescription” diet… get the basics right and see if you actually have a problem.

Many owners go on to feed the same foods their Boxers were supposedly “allergic” to with no problems whatsoever once those foods are provided in raw, whole form rather than cooked and combined in highly processed, commercially manufactured dog foods.

In other words, the problem is not the food itself, or a true allergy, but one or more other issues such as:

We’ll explore each of these in more detail in the causes section below.

I am not a vet. This post is intended for general informational and educational purposes. I encourage readers to view my full disclaimer here.

What Is A Food Allergy In Boxers?

A true food allergy occurs when the body’s defences mistake a food protein as a foreign invader and mounts an immune response.

While many owners are under the impression their Boxers are “allergic” to certain foods, true food allergies are actually rare in dogs.

The exact prevalence is unknown.

Food “intolerances” and “hypersensitivities” are other terms that are applied.

They’re used to mean something less than an allergy, where a particular food or food additive prompts an abnormal physiological response, but one that is non-immune mediated.

Even this is probably not what is going on if your Boxer has gastrointestinal or skin issues.

There are many more likely explanations for a Boxer’s symptoms, including toxic reactions due to the ingestion of bacterial or fungal toxins all-too-often found in dog foods.

Note that itchiness, by far the most common symptom blamed on food allergies, can be due to simple overwashing.

A bath four times a year is plenty.

Washing a Boxer too often strips essential oils from the coat, making the skin prone to small cracks called microfissures, which produce itching.

Diagnosis Of Food Allergies In Boxers

Marketing claims aside, there is no definitive test that can reliably tell you whether your Boxer has food allergies and to what foods.

There is no shortage of pricey tests available including ones that use:

Some services have your dog chew on a rope and then send it in for saliva analysis, others ask for a sample of your dog’s hair.

According to the Cummings Veterinary Medical Center at Tufts University, none of the currently available tests have proven accuracy.

Multiple studies have found these tests are not helpful in diagnosing food allergies, despite widespread use for this purpose.

A veterinary dermatology conference heard that some tests “diagnosed” plain water as having food allergies.

This means the only diagnostic tool vets really have is a food elimination diet, which takes time and discipline to conduct correctly.

Note that elimination trials are only effective if they include the re-challenge or “provocation” phase at the end to identify the specific allergen.

Do Boxers Have Food Allergies A Lot?

The vast majority of Boxers do not have food allergies.

The vast majority of Boxers are, however, misfed — and this is the cause of the allergy-like symptoms.

Boxers will suffer when fed inappropriate diets and made to carry high toxic loads.

The good news is, symptoms can be easily resolved by identifying and removing the underlying cause.

What Causes Food Allergies In Boxers?

The causes of food allergy-like symptoms in Boxers are many and varied.

Cooked food is totally unnatural fuel for the canine body.

As carnivores, dogs are designed to consume raw meat, bones and offal.

Apart from it being biologically inappropriate for a dog, cooking meat changes its composition, denaturing proteins and generating carcinogenic compounds.

It may well be something other than the chicken or the beef that’s causing your Boxer’s issue.

Any number of extraneous ingredients in dry dog food can cause problems, which is why kibble is not an optimal diet Boxer dogs.

The problem is mold produces substances called mycotoxins, to which dogs are particularly susceptible.

Mycotoxins suppress the immune system and can create disease in all organs of the body.

After a career spent in the pet food industry, Brown now recommends the feeding of fresh, whole foods.

Fat overconsumption is one of the often-overlooked causes of itching in dogs.

By comparison, the products of human agriculture are extremely fatty — deliberately fattened for slaughter.

It’s not profitable to remove this fat, so dog food manufacturers simply grind it in to their products.

Do the conversion and you will find a dog food presented as 14 per cent fat actually contains 62 per cent fat.

As well as itching, other signs of excess fat consumption include:

The average pet dog is bombarded by toxins, not just in the processed food they eat daily but via:

These chemicals accumulate in the tissues via a stacking effect and once they pass a threshold of tolerance, symptoms result.

The body works hard to filter and excrete toxins — the kidneys, liver, lymph and bowels all play a role — but if the exposures are too great, the body can’t keep up.

Minimizing the toxic load your Boxer’s body is carrying is crucial to avoiding symptoms often interpreted as “allergies”.

What Foods Are Boxers Allergic To?

The most commonly reported food allergies in dogs are to animal proteins including:

However, these proteins feature mostly because they are have been the most common ingredients in pet foods for the past several decades.

Let’s take a closer look at a few of these.

Chicken is often blamed as the cause of a Boxer’s allergy-like symptoms.

However the chicken in question is 1. cooked and 2. often in the form of the “poultry meal” contained in many kibbles.

This is low quality meat in a form that dogs’ bodies aren’t designed to digest.

Before buying into the idea that your dog is allergic to chicken, try feeding human-grade, free-range and ideally organic chicken.

Be sure to feed it in the form dogs are built to consume ie. raw.

Vaccines are cultured on animal tissue such as calf fetuses.

During manufacture, remnants of that tissue culture end up in the vaccine.

Canine vaccines contain high levels of foreign proteins like bovine serum albumin and bovine IgG at “many orders of magnitude greater than the level recommended by the World Health Organization for human products”.

When the body detects the foreign proteins, it triggers an immune response.

Just as vaccines are thought to induce allergies in humans, it’s believed that the presence of cow proteins in canine vaccines might prime the body to develop allergies, including food allergies.

The presence of beef proteins in vaccines would explain why beef is one of the dietary proteins that most often trigger allergic reactions in dogs.

Grains and other plant-based ingredients are said to be an uncommon cause of food allergies.

Gluten allergies are thought to be extremely rare in dogs, clearly documented only in Irish Setters and possibly Border Terriers.

Nevertheless, corn frequently gets blamed as a trigger for food “allergies”.

Dogs have no biological requirement for grains and these ingredients are used in commercial dog food because they are cheap fillers.

As is the case with any offending food, a corn intolerance or a reaction to the corn itself is only one possible explanation for why dogs have problems when they consume foods containing corn.

There are a couple of other factors at play when it comes to ingredients like corn.

One is the mold and associated mycotoxins mentioned earlier — grains are susceptible to mold growth during storage.

Grains destined for pet foods are surely subjected to less stringent storage requirements than those intended for human consumption.

The other thing to consider is genetic modification.

88 per cent of US corn crops are GMO.

The full consequences of consuming GMO foods are not known but skin and food “allergies” are on the long list of problems that studies have linked with the consumption of GMO foods.

A 2009 study found toxicity in the liver and kidneys after feeding GMO corn to rats for 90 days.

They also noted effects in other organs including the heart, adrenal glands, spleen and blood cells.

How To Treat “Food Allergies” In Boxers

This typically means dogs end up on restricted diets that are commercially manufactured and highly processed.

Here is a checklist to follow if you are concerned your Boxer may have food allergies:

If you optimize the basic care and feed a raw diet, you will find you can feed all meats, including those you’ve been told your Boxer is “allergic” to.

How Not To Treat A Boxer’s Food Allergies

Many of the treatments commonly offered in response to a diagnosis of “food allergies” or “food-allergic dermatitis” are not only unnecessary, but create fresh problems, including iatrogenic (caused by drugs) symptoms that are worse than the original ones for which the Boxer has now been needlessly medicated.

Owners desperate to relieve their Boxers’ symptoms are prime targets for a range of costly products and services including:

Sadly, it’s possible to do the rounds of all these without a single professional identifying the fact that the dog in question is being fed a biologically inappropriate diet and loaded up with toxins from chemical dewormers etc.

As a result, nothing seems to work — or to work for long — because the real underlying cause has never been identified and addressed.

Consider spending your money instead on buying fresh, real food in order to home prepare a raw diet for your Boxer.

You may find our free, 7 Day eCourse on how to properly raw feed a Boxer helpful.

It can seem like every second Boxer owner believes their dog has food allergies.

This mistaken belief, sometimes based on an erroneous diagnosis, sends owners down a path that creates more problems than it solves.

In a bid to relieve their dogs’ symptoms owners end up distorting their Boxer’s diet in ways that are not only unnecessary and ineffective, but unhealthy.

Rather than avoiding chicken or beef or whatever other protein has been deemed the source of your Boxer’s allergies, try first transitioning to a fresh, natural raw diet and offering the food in that context.

You will likely find, as many other owners have, that the issue resolves with proper feeding and overall care.

Becker, Karen, DVM, Should Any Dog Food Formula EVER Have Corn Starch as the Main Ingredient? Mercola Healthy Pets, 2012

Hagen-Plantinga, E A et al, Measurement of allergen-specific IgG in serum is of limited value for the management of dogs diagnosed with cutaneous adverse food reactions, The Veterinary Journal, 2017

Verlinden, A et al, Food Allergy in Dogs and Cats: A Review, Critical Reviews in Food Science and Nutrition, 2006