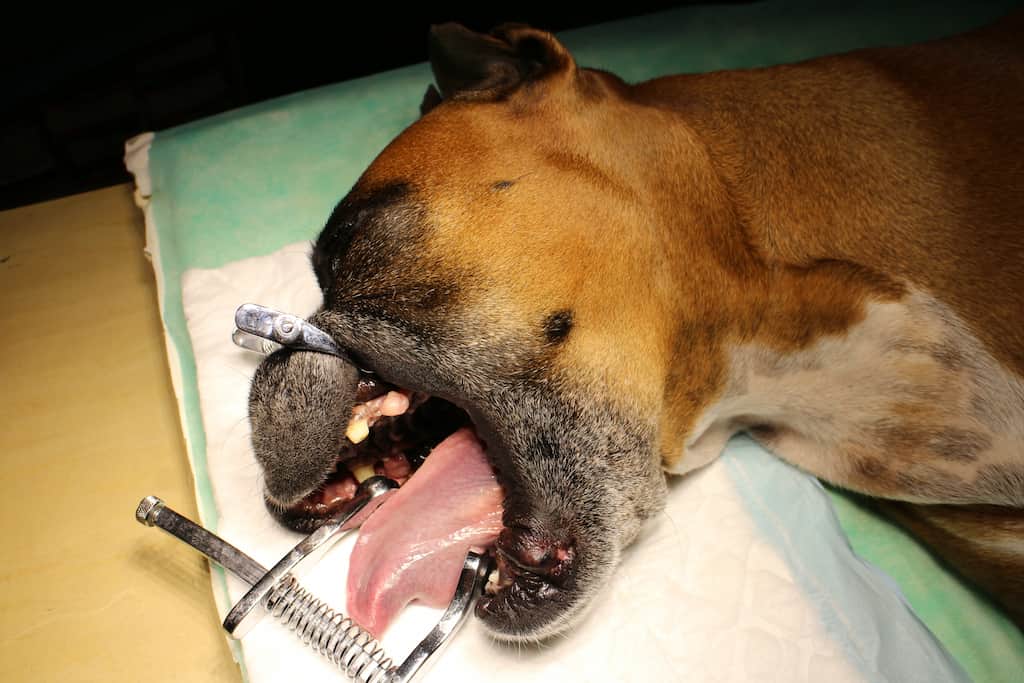 Gingival hyperplasia, sometimes loosely referred to as epulis, is a gum disorder that disproportionately affects the Boxer breed.

Small lumpy growths on the gums are usually the first sign of gingival hyperplasia, which is said to arise in a third of Boxers over five years of age.

As it progresses, the condition can develop into a cauliflower-like disfigurement that envelops the teeth.

Gingival hyperplasia occurs secondary to chronic inflammation due to the presence of dental calculus (tartar).

Boxers fed highly processed diets like kibble miss out on the teeth cleaning function of raw meaty bones, which form the basis of the natural canine diet.

How Serious Is Gingival Hyperplasia In Boxers?

Gingival hyperplasia is not malignant, so it doesn’t spread to other parts of the body.

It’s not generally painful but can progress to the point that the crowns of the teeth are almost totally covered by gum.

At this point, the condition can interfere with eating.

Food and bacteria become trapped in the overgrown tissue, which can lead to:

Your vet may recommend x-rays of the mouth to assess the health of the teeth and jawbone.

Depending on what they find, teeth extractions are sometimes involved.

The firm swellings associated with gingival hyperplasia are not usually painful.

The centre of the growth can sometimes become so hard as to be bone-like.

The condition can result in difficulty eating, discomfort and sometimes owners do report that their dogs show signs of pain.

The procedure to cut back the gums is considered a painful one.

Signs Of Gingival Hyperplasia In Boxers

Telltale signs of gingival hyperplasia include:

Progression Of Gingival Hyperplasia in Boxers

As more and more gum tissue overgrows, there is a formation of what’s called a periodontal pocket.

This pocket harbors food, bacteria, hair and other debris, all of which aggravate the inflammation which, in turn, exacerbate the gingival hyperplasia.

Pus-filled oral lesions sometimes referred to as “gum boils” can form in response to the inflammation.

There can be a “foreign body reaction” to the accumulated material, compromising blood supply to the gum.

In chronic or severe cases, mineral or calcium deposition can occur.

In the past gingival hyperplasia was said to be “idiopathic” or spontaneously arising, of unknown cause.

Chronic Inflammation Due To Dental Calculus

These days it’s understood to occur as a result of chronic inflammation, usually due to the presence of dental calculus.

In other words, gum overgrowth is caused by poor dental hygiene, which — in most of the pet dog population — is arguably due to a highly processed diet like kibble, and the near total absence of raw meaty bones from the diet.

Why Kibble Is A Poor Diet For Your Boxer

Raw meaty bones are Nature’s toothbrush and their consumption is the reason wild dogs have strong, healthy teeth without tooth brushing or dental cleanings under anesthetic.

In humans, gingival hyperplasia is associated with:

Vets suspect a genetic link that causes some dogs to respond to inflammation and the presence of bacteria in the mouth by creating more gum tissue, instead of by receding the gums which is what usually happens in response to dental plaque and gum disease.

Some cases of gingival hyperplasia in both dogs and humans are iatrogenic (caused by drugs).

Drugs known to cause this disorder include:

Gingival hyperplasia is usually strongly suspected based on how the gum looks and the fact that the dog is a Boxer.

Biopsy is required to give a definitive diagnosis and may be advisable to rule out oral cancer or malignant tumors of the gingiva.

Treatment Of Gum Overgrowth In Boxers

If caused by drugs, discontinuation of the medication will usually see the gums return to normal.

Otherwise, if the condition is severe enough to warrant intervention, surgical removal under general anesthesia is the usual veterinary response.

In a procedure known as gingivoplasty or gingivectomy, the growths are cut away either with a blade or by cautery (burning the flesh with a heated electrode to stem bleeding).

The surgery restores the gumline and excises any pockets of tissue that are trapping food and debris.

It’s a painful procedure and dogs are usually sent home with antibiotics and analgesics for 4 to 6 days and instructions to feed soft food and avoid hard chew toys.

There is usually a recheck after 7 days, depending on the technique used.

Complications including thermal necrosis (tissue death) of gum, bone and teeth necessitating multiple extractions can arise when laser surgery and electrosurgery are involved.

Your vet will ordinarily do pathology testing on the removed tissue to rule out anything more serious.

Treatment should be accompanied by treatment of the underlying gingivitis, which requires better dental hygiene.

This comes back to feeding a fresh, natural canine diet based around raw meaty bones, though this is rarely mentioned by conventional vets.

Two vets who are a good source of information on the link between raw feeding and optimal dental health in dogs are Dr Ian Billingworth, who wrote Give Your Dog a Bone: The Practical Commonsense Way to Feed Dogs for a Long Healthy Life and Dr Tom Lonsdale who authored Raw Meaty Bones Promote Health.

There is some prospect that folate supplementation (or preferably feeding of folate-rich whole foods like liver) may be worthwhile, as it’s been shown to decrease drug-induced gingival hyperplasia in humans.

Gingival hyperplasia tends to recur, within months to years of removal, with dogs subjected to repeated surgeries.

The Best Supplements For Boxers

How To Prevent Gingival Hyperplasia

Given its connection to inflammation and bacteria, good dental health and hygiene is essential to preventing gingival hyperplasia.

Diet is a powerful, if overlooked, factor.

Raw meaty bone consumption as part of a natural canine diet is the key to avoiding the problem in the first place.

Likewise, diet should be front and center when considering how to stop the progression of the condition and to prevent recurrence post-surgery.

How Much Does Surgery To Correct Gingival Hyperplasia Cost?

Depending on the extent of the condition, the cost for surgical excision of overgrown gums ranges from expensive to very expensive, and may need to be repeated periodically due to recurrence.

Other Oral Health Issues In Boxers

Gingival hyperplasia can be difficult to distinguish from tumors of the mouth.

Vets generally advise the situation may be more sinister if a lump grows, changes or goes dark or bright red.

Gingival hyperplasia can occur alongside fibromas, which are benign oral masses found on the gums.

Fibromas are sometimes biopsied because they can be hard to distinguish from malignant gingival tumors.

Squamous cell carcinomas are malignant tumors which can look similar to gingival hyperplasia.

SCCs often present with bleeding and are usually curable with early treatment due to their low metastatic rate.

Mast Cell Tumors In The Mouth

Mast cell tumors, to which Boxers are prone, can occur — rarely — in the mouth.

When they do, tend to be more aggressive than those found on haired skin.

According to one study, 55% of oral mucosal mast cell tumors have already metastisized to the lymph nodes at diagnosis, but treatment can still allow for lengthy periods of survival.

Dirty teeth in Boxers are much more than a cosmetic issue and should be prevented and treated with Nature’s toothbrush, raw meaty bones.

How To Clean Your Boxer’s Teeth (Without Brushing)

Bad breath in Boxers can be a side effect of more serious issues, but more often it reflects poor diet and poor dental hygiene, both of which are precursors to not only gingival hyperplasia, but an array of other health problems.

Why Your Boxer Has Bad Breath

Is Epulis The Same As Gingival Hyperplasia?

The language around gingival hyperplasia can be confusing.

According to the medical literature, epulis (or epulides) is a non specific term meaning a growth of the gum.

Gingival hyperplasia, on the other hand, is a histological term, that describes not how things look to the naked eye but what’s going on at a microscopic level.

It means an increase in the number of cells.

Those proliferated cells are fundamentally normal — except for being inflamed and sometimes mineralized.

Some other forms of gingival overgrowth/enlargement result from existing gum cells becoming larger without increasing in number.

Although all forms of epulis are considered benign, one form (called acanthomatous epulis or ameloblastoma) invades bone and can be quite destructive.

Other Breeds Affected By Gingival Hyperplasia

Gingival hyperplasia is most common in brachycephalic (short-nosed) breeds, which could be due to a tendency to mouth-breathe, which can have a drying effect on the gums.

Veterinarians generally associate it with Boxers, but it also occurs in:

Some small breed dogs and cats are also affected.

Gingival hyperplasia is a common occurrence in Boxers, but not inevitable.

Treatment is surgical and often doesn’t represent a permanent cure.

Feeding a fresh food diet based on raw meaty bones is critical in order to give your Boxer the best possible chance of overcoming any genetic predisposition that may be in the breed.

Lewis, John, What to do When Gums Overgrow Their Boundaries, Veterinary Practice News, 2016