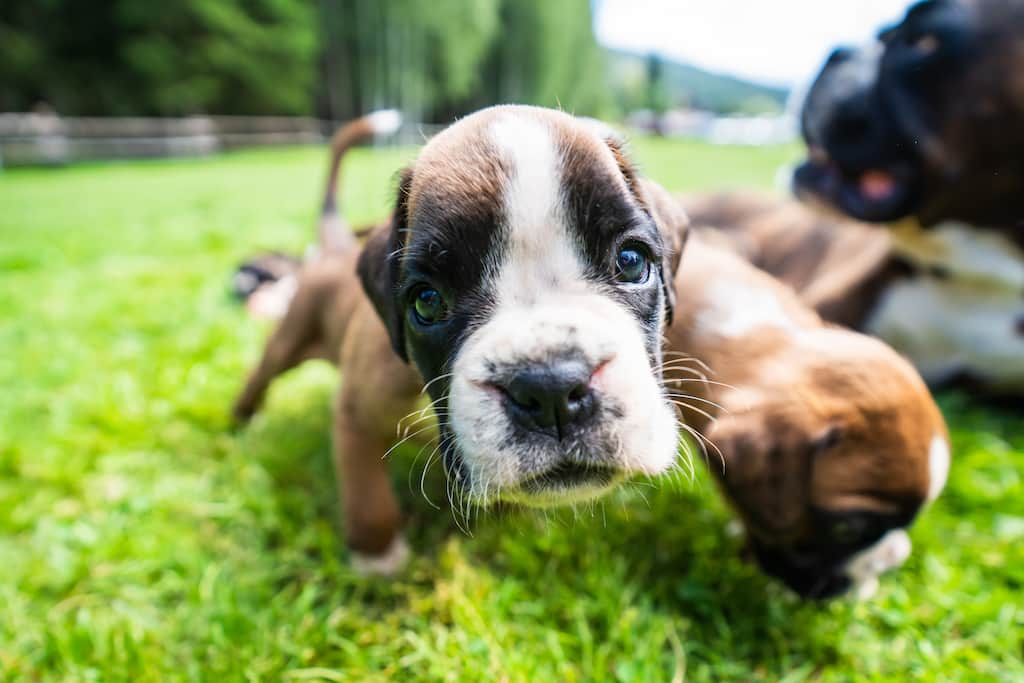 By the time your Boxer puppy comes home, she’s already passed through several stages of growth and development, but a critical phase is just beginning.

Major milestones in your Boxer’s growth and development range from weaning and early socialization with the litter to rehoming and establishment in the hierarchy of the new family.

Understanding the various developmental stages a Boxer goes through will allow you to effectively socialize your pup, navigate any fear periods that arise and raise an all-round well-adjusted dog.

A puppy’s development begins in the womb.

The emerging field of epigenetics has shown the expression of an individual’s DNA is highly variable depending on a wide variety of environmental factors including maternal behavior, stress and exposure to toxins, drugs and hormones.

It’s known that stress during pregnancy can influence the temperaments of offspring in measurable ways.

The Early Weeks Of Life

When your Boxer is born she is helpless and totally dependent on her mother.

The first few weeks ofher existence is consumed with suckling, sleeping and seeking care from her mother.

She can feel, taste and smell.

But her ability to move is limited, and her eyes and ear canals are closed.

Even her gut doesn’t work on its own, requiring periodic stimulation by her mother, who licks the puppies’ bellies to promote digestion.

The First Window Of Opportunity

In weeks two to four, a Boxer pup’s eyes and ears open and her awareness of the world dramatically expands.

At the same time, the pup is yet to develop a sense of fear.

So, whatever she’s exposed to now is filed away in her puppy brain as normal and safe.

Good breeders take advantage of this developmental window to begin exposing puppies to the color and movement of daily family life.

The most proactive even play recordings of sounds like fireworks and lawnmowers, so that these stimuli aren’t distressing when they’re encountered later in the real world.

Much of the influence of early experiences on a dog’s temperament is thought to be via a biological mechanism called the the hypothalamic-pituitary-adrenal axis, or HPA axis.

The HPA axis is an intertwining of the endocrine and central nervous systems, responsible for modulating an organism’s stress response.

Your Boxer pup’s prime socilalization period is from three to 12 weeks, peaking between six to eight weeks.

This timing gives enormous influence to the breeder: early stimulation can be protective but must be used with caution.

Cognitive abilities develop rapidly, alongside social skills and a curiosity that’s unbridled by fear until about eight weeks.

Tests have shown three to five week old puppies can recognize new objects they’ve only previously been shown on video.

At five to eight weeks, puppies develop “object permanence”, the ability to understand that an object can move from one hidden position to another.

Some research suggests puppies as young as six to nine weeks can recognize and follow human gestures, like pointing to find hidden food.

Through play and interaction with their littermates and mother, puppies “imprint” other dogs as the same as them.

During this time they can readily learn to accept other animals, like cats.

In the litter, pups practice “being dogs” and learn impulse control and bite inhibition from their mother’s admonishments and how to toilet away from where they sleep.

Your Boxer is a sponge.

Habits and associations instilled now can be difficult to undo later.

After 12 weeks of age or so, dogs develop a growing tendency to react fearfully to new people or situations, capping further socialization.

Most wolves and dogs naturally wean their pups between five and 10 weeks of age.

It happens gradually, over a period of weeks.

The timing can have effects on behavior in the adult dog with studies suggesting early weaning is associated with anxious and aggressive behavior later in life.

The food pups are weaned onto has a major impact on health.

Pups started on non-processed meat diets as their first food have:

Leaving The Litter Before 6 Weeks

Your Boxer’s developmental phases have implications for when she should and shouldn’t be removed from her litter.

Numerous studies have found pups separated from their mothers and littermates at or before six weeks (compared to those that remain until 8 to 12 weeks) experience poorer health and behavioral outcomes including:

Research suggests early removal from the litter delivers no benefits in terms of improved socialization towards humans.

Dogs — like most creatures — are hardwired to develop a sense of fear, for their own protection.

As puppies develop, there are two critical “fear periods” during which they’re hypersensitive to threatening stimuli.

During these times, a single unpleasant experience can have lifelong repercussions.

It’s unfortunate the first fear period coincides with the time that most Boxer puppies are removed from the litter and rehomed.

Ideally, pups should stay with their moms and littermates until they’re 10 to 12 weeks old.

Distressing psychological or physical stimuli should be avoided at this time, including:

Here is more information for dealing with anxiety in your Boxer.

From ten weeks to four months, a Boxer pup begins to assert herself in interactions with other dogs in what’s sometimes called a “ranking” period.

Her conflict resolution skills, or lack thereof, may become apparent.

In multi-dog households you may notice some vying for dominance.

As your Boxer grows more independent, you may lose some control of her behavior.

You’ll want a long line so you can keep her safe when her “Come” command falters.

As a large breed, Boxers are late bloomers.

They’re not considered fully mature until at least two years of age, at which time they have usually taken on most of their adult stature, although there may still be some filling out to do.

You will likely notice your Boxer’s food needs change — a pup’s energy requirement is highest at weaning, reducing as the puppy reaches adulthood.

Overfeeding or improper nutrition not only leads to obesity.

In a growing Boxer puppy, it can be associated with the developmental abnormality called knuckling where a Boxer puppy’s leg bows at the wrist, almost overnight.

Vet Dr Ian Billinghurst advises it is preferable to slightly underfeed a puppy to slightly “hold back” growth from proceeding too rapidly.

This mimics what would occur in the wild where resources are generally scarce.

Exercise While A Boxer Is Still Growing

As a large breed, Boxers are slow maturing and experience an extended period of growth and development.

The growth plates on a Boxer’s bones remain open until quite late, towards two years.

A young Boxer’s joints can be damaged by jarring exercise like jogging, high jumps and even long walks.

While your Boxer might seem to grow up in the blink of an eye, her physical, psychological and cognitive development is a lengthy process, one that’s not complete until two years of age.

Socialization windows should be maximized to expose puppies to a wide variety of stimuli and experiences.

Fear periods can be managed with gentle support and the provision of opportunities for your pup to explore unfamiliar and threatening situations at her own pace.

Before you know it you will have an even-tempered, grown up Boxer on your hands.

Battaglia, Carmen, Periods of Early Development and the Effects of Stimulation and Social Experiences in the Canine, Journal of Veterinary Behavior, Volume 4, Issue 5, 2009, p203-210