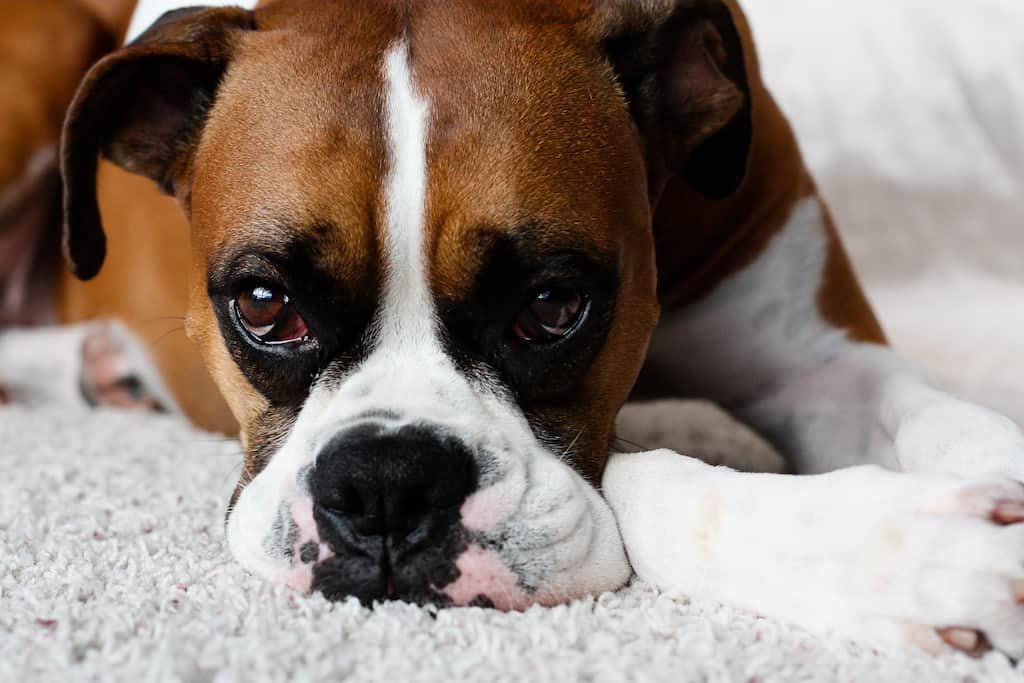 Head bobbing in Boxers is not well understood but the condition is thought to be benign, insofar as it causes no distress, pain or damage to the dog.

Also known as idiopathic head tremors, head bobbing affects otherwise healthy Boxers, and usually lasts for a few minutes, during which the head shakes uncontrollably but the dog remains fully conscious and aware.

The good news is that idiopathic head tremors are not seizures.

There is no treatment and it’s not unusual for the dog to grow out of them over time.

I am not a vet. This post is intended for general informational and educational purposes. I invite readers to view my full disclaimer. Boxer Dog Diaries is reader powered. I may receive a small commission, at no extra cost to you, if you make a purchase via links I share.

What Are Idiopathic Head Tremors In Boxers?

Head tremors are a repetitive, involuntary bobbing or shaking of the head.

In medical terms, they are referred to as “focal” head tremors, meaning they are confined to one specific location, the head, rather than being body-wide.

What Do Idiopathic Head Tremors Look Like In A Boxer?

The side to side motion is the most common presentation seen in Boxers.

Occasionally there is some circular movement as well.

How Long Does Head Bobbing Last In Boxers?

A minority of dogs experience longer episodes, up to an hour’s duration.

There are even a few reports of head tremors going on for more than 12 hours straight.

Most dogs with IHTS experience quite frequent episodes, ranging from several times a week to many times a day.

They can be as seldom as three to four times a year or less.

The frequency and severity of the head bobbing can vary within the one dog over time.

Are Head Tremors In Boxers Dangerous? Do They Hurt?

Head tremors tend to worry the owner much more than the dog.

For the dog, there is no evidence of pain or distress.

Some Boxers don’t even seem to be aware of the tremoring.

What Is The Prognosis For Boxers With Idiopathic Head Tremors?

There are no known consequences associated with head bobbing, either short or long term.

Most owners observe no ill effects after a bout of head tremors.

Boxers suffering idiopathic head tremors appear to be in good health overall, and are not thought to be any more likely to develop neurological deficits down the track or to experience other health problems connected to the IHTS.

Two thirds of dogs experience spontaneous improvement with episodes decreasing in severity and frequency or resolving completely, over time.

However, head bobbing is clearly not normal in a 100% healthy Boxer — and much of what we “know” about the condition is veterinary conjecture based on best guesses rather than firm fact.

As such, you may wish to optimize your Boxer’s care to eliminate known causes of tremors more generally — more on this when treatment is discussed later.

Signs Your Boxer May Be Having Idiopathic Head Tremors

Your Boxer may have idiopathic head tremors if:

What Causes Head Tremors In Boxers?

Tremors in general can be caused by many different things including:

Note that metronidazole (also called Flagyl) is a very commonly prescribed but strong antibiotic, readily dispensed by vets as an antidiarrheal — usually without conveying to the owner that it can have neurological side effects.

This drug is also known to have immune-modulating activity and is sometimes used to treat inflammatory bowel disease, as well as the protozoal infection giardia.

According to the veterinary literature, tremors caused by toxins and movement disorders differ from idiopathic head tremors in that the head is not usually affected, particularly not in isolation and these kinds of tremors are not episodic.

With intention tremors, the head tremor is triggered by action or goal-oriented movement and does not occur at rest or in a neutral head position as it does with idiopathic head tremors.

Why Do Idiopathic Head Tremors Happen?

Idiopathic head tremors arise from involuntary contractions of the muscles in the head and neck.

But what triggers the contractions?

Vets don’t know, which is what the word “idiopathic” means: spontaneously arising, of unknown cause.

There is likely to be an underlying genetic basis, given that certain breeds are more affected than others.

Several theories exist as to the cause of idiopathic head tremors.

Perhaps the leading contender is that head tremors result from an abnormality involving the trigeminal nerve in the jaw, which in turn affects the stretch reflex mechanism in the neck.

However, unexplained head tremors in Boxers have anecdotally been associated with:

The Food and Drug Administration has warned that drugs of the isoxazoline class can cause “adverse neurological events” in some dogs, including:

While issuing the warning, the FDA did not require the products to be removed from sale.

Consider safe alternatives to these chemicals.

Many pet dogs have no issue with fleas and ticks in the first place, making these products all risk, no benefit.

For gastrointestinal worms, best practice is no longer to use a monthly chemical wormer, certainly not without first returning a positive fecal test and knowing which specific worm is causing a problem.

The latest science indicates a small worm burden is actually protective against immune and inflammatory disorders.

There are natural ways to protect your Boxer from fleas.

Worms & Your Boxer
How To (Safely) Protect Your Boxer From Fleas

Heartworm is spread by the bite of an infected mosquito and so is not necessary year-round or when your dog has no exposure to mosquitos.

The best defence against parasites of all kinds is to feed a raw meaty bone-based diet.

A decade-long study known as Pottenger’s Cats showed that gastrointestinal parasitism was largely a problem of cats fed cooked food rather than their natural raw diet of bones, muscle meat and offal.

The findings apply equally to dogs, and to any species denied its biologically-appropriate diet.

Are Boxers Predisposed To Head Tremors?

But, Boxer dogs are among the predisposed breeds.

According to a study of 291 dogs published in the journal Veterinary Medicine International in 2015, the breeds most often affected include:

Most of the dogs with IHTS were purebreds (84%).

However, that means a substantial number of mixed breed dogs are also affected (16% of all dogs with idiopathic head tremors according to the 2015 study).

What Not To Do When Your Boxer Has A Head Tremor

It’s best not to overreact or make a big deal of it — this causes more stress to your dog than the tremors themselves.

2. Do Not Assume Head Tremors Are Seizures

When a Boxer’s head shakes, it is sometimes mistaken for an epileptic seizure.

A dog with idiopathic head tremors will show no other neurological abnormalities.

Because the usual treatment for seizures is a drug called phenobarbital, it’s critically important to get a proper, skilled diagnosis.

3. Do Not Medicate Your Boxer For Idiopathic Head Tremors

Treatments that have been tried and found to make no significant difference to head tremors include:

How To Diagnose Idiopathic Head Tremors In Boxers

The first thing to do is video your Boxer during an episode so you can show your veterinarian what it looks like.

Keep a note of when tremors happen, what preceded it, how long they last and any other details you can.

This information may help identify patterns or your Boxer’s potential triggers.

No specific test can conclusively tell you your Boxer has idiopathic head tremors.

A formal diagnosis is made by ruling out other possible causes of head shaking such as a progressive central nervous system disorder, or an ocular (eye) problem.

Tests your vet may suggest include:

Before embarking on extensive testing, including scans and invasive procedures like a spinal tap, it’s worth seeing if the episodes can be consistently stopped by using distraction.

If so, this is usually enough to settle on a diagnosis without further expense and stress to the dog.

How To Treat Idiopathic Head Tremors In Boxer Dogs

The prevailing veterinary view is that idiopathic head tremors are harmless and require no treatment — which is lucky because none exists.

However, this doesn’t mean there is nothing you can do.

What To Do During An Episode

During an episode, the vast majority (87% according to the 2015 study) of dogs can be snapped out of head bobbing using distraction.

You will probably be able to stop your Boxer’s head tremors, at least temporarily, by:

Why does this work?

The fact that tremors can be interrupted by using distraction is consistent with the theory that head tremors are caused by an abnormality of the trigeminal nerve.

When the dog reaches to take a treat, the neck muscles contract, releasing the stretch mechanism that had malfunctioned, caused the tremor.

Note, some owners are under the impression that the treat needs to be honey, or a specific, sweet food.

They believe it’s the sugar hit to the bloodstream that stops the tremor.

This is not the case, as evidenced by the fact that any form of distraction — including non-food distractions — will have the same effect.

It’s the distraction, and the movement to reach for the treat, that makes the difference.

Note, ice cream, sometimes suggested for head tremors, is not appropriate food for your Boxer.

Karo syrup, also often suggested, can have a laxative effect and is, likewise, not recommended.

Note that a simple distraction doesn’t always work and sometimes head bobbing continues even during interaction with the owner.

If a tasty treat doesn’t snap your Boxer out of it, and the tremor doesn’t stop on its own after five or ten minutes, you can try a bigger distraction, like going for a gentle walk outside to reset your dog’s system.

Some owners find physical contact with the head, like having the Boxer lie down. or supporting the head with a pillow, stops the shaking.

What To Do To Help Prevent Further Head Tremors

While there is no “treatment”, as such, for idiopathic head tremors, the association of tremors with toxicity of various kinds provides you several avenues.

Even without identifying your Boxer’s trigger, it’s recommended to:

If you feed a properly composed raw diet, your Boxer will receive all the vitamin B he needs for optimal health through consumption of vitamin B rich whole foods including chicken, red meat and offal like liver and kidney.

Other indications of toxic accumulation in Boxers that are often overlooked include:

How To Raw Feed Your Boxer
Why Do Boxers Get Hives?

Other Causes Of Head Shaking In Boxers

Seizures and idiopathic head tremors are not the only things that can be responsible for a Boxer starting to shake his head.

Other causes of head shaking and other strange repetitive movements of the head and neck include:

If these issues are at play, your Boxer may have accompanying symptoms such as:

Idiopathic head tremors, by definition, are tremors that cannot be explained by current veterinary science, nor tied to a clear cause.

The classic, defining features of IHTS, and the most useful in reaching a diagnosis, are that the dog remains otherwise alert and normal during an episode, displays no other neurological symptoms and stops head bobbing when distracted.

If your Boxer is experiencing head tremors, it’s a good time to clean up the diet and other inputs to make sure toxins are not building up in his system and causing abnormalities.

ASPCA Pro, Most Common Toxicologic Causes of Tremors in Dogs

FDA, Fact Sheet for Pet Owners and Veterinarians about Potential Adverse Events Associated with Isoxazoline Flea and Tick Products, current as at 08/13/2021