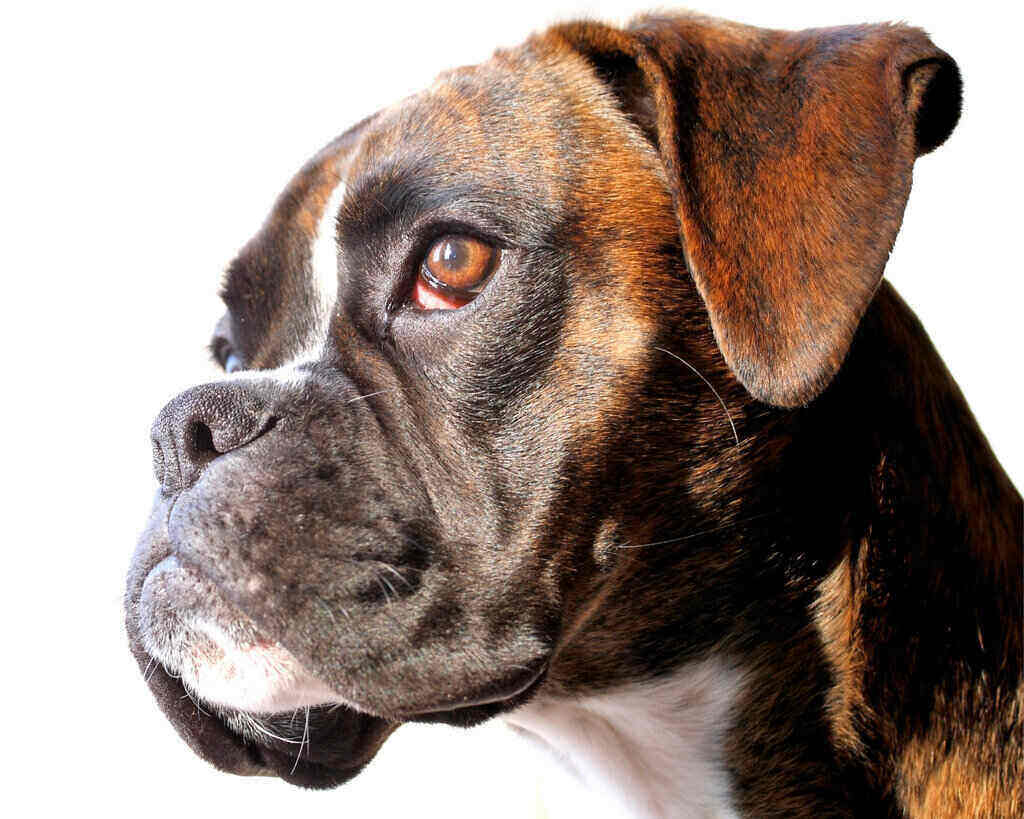 As purebred dogs, Boxers are prone to a number of diseases.

Some of the health problems affecting Boxers have an identifiable genetic basis that can be tested for, and some do not.

Diseases Boxers Are Screened For

Breeders routinely screen for a range of heritable diseases, so they can reduce the likelihood of passing on those conditions to puppies.

The American Boxer Club recommends the screening of breeding stock for illnesses including:

Arrythmogenic Right Ventricular Cardiomyopathy is a disease of the heart muscle that disturbs the conduction of electrical impulses.

This causes an arrhythmia where the heart beats too fast or irregularly.

It can result in sudden death or heart failure.

Symptoms include weakness and collapse.

Dilated cardiomyopathy is where the heart becomes so large, thin and weak it can’t effectively pump blood.

Symptoms of DCM include weakness, collapse, labored breathing and coughing.

Aortic stenosis is a congenital structural problem involving a narrowing of the outflow from the left ventricle to the aorta, resulting in arrhythmias.

It can be detected as a murmur in young puppies, but sometimes doesn’t show up until later.

It needs to be differentiated from other innocent “flow” murmurs that disappear as the puppy matures.

So Your Boxer Has A Heart Murmur? Don’t Panic. Read This

Degenerative myelopathy, or DM, is a progressive and incurable disease of the spinal cord that presents in older dogs.

DM is not painful but it is debilitating and ultimately fatal.

It starts with weakness or loss of coordination in the back legs, perhaps the dragging of a toe.

The condition progresses to paralysis involving incontinence and can spread to the front legs.

It is similar to ALS or Lou Gehrig’s disease in people.

This is a progressive and inherited condition involving a malformation of the hip or elbow joint that can lead to osteoarthritis.

Dogs are evaluated by x-ray once they’re older than two years and can be registered as free of the disease on a database kept by the Orthopedic Foundation For Animals.

Unfortunately hip/elbow dysplasia is just one of the joint problems that can affect Boxers.

Testing for an under-active thyroid gland involves a blood panel.

Boxers also appear to have a predisposition for other serious diseases including:

As well as the officially recognized diseases of the breed, pet Boxers can suffer from a variety of other acute and chronic health problems including:

Boxer Colitis
Boxer Stomach Problems: The Simple Cure You’re Overlooking
How To Fix Boxer Acne
Why Do Boxers Get Hives?
Help! My Boxer Has Allergies
Food Allergies: What Every Boxer Owner Should Know
7 Reasons Your Boxer Has Itchy Skin
Paw Licking In Boxers
Does Your Boxer Have Seasonal Flank Alopecia?
Boxer Dog Head Bobbing Or Tremors
Lumps On Your Boxer’s Gums? It Could Be Gingival Hyperplasia
How To Fix Tear Stains In Boxers

How To Prevent Bloat In Boxers
13 Tips For Keeping A Boxer Cool
What To Do If Your Boxer Swallows Something He Shouldn’t
Boxer Stung By A Bee?

Thankfully these conditions are usually preventable with careful supervision and good planning.

Boxers have delightful temperaments and make gentle, sweet-natured companions renowned for their love of children.

However, the large number of Boxer rescue organizations across the United States and elsewhere tells a story of an exuberant breed that can become difficult if improperly managed.

Behavioral problems seen in Boxers include:

12 Causes Of Aggression In Boxers
Are Boxer Dogs Dangerous?
7 Ways To Relieve A Boxer’s Storm Phobia
Is Your Boxer Scared Of Everything?

These issues are in no way exclusive to, or more common in, Boxers than any other breed — but it’s worth being aware of how things can go awry.

Selecting a good breeder and doing proper socialization of your Boxer puppy can go a long way to avoiding these problems.

Acepromazine, or ACE, is the most commonly prescribed tranquilizer in veterinary medicine, to which Boxers have a documented sensitivity.

According to many anecdotal reports from both owners and vets, adverse reactions in Boxers include collapse, respiratory arrest and profound bradycardia (slow heart rate).

Previous editions of Plumb’s Veterinary Drug Handbook contained warnings about the drug’s use in Boxers but this information has disappeared from the current edition.

This means your vet may be unaware that this drug should never be used in Boxers.

Make sure you insist that ACE not be used if your dog ever requires an operation.

Acepromazine: Why Your Boxer Must Never Have This Drug
How To Teach Your Boxer To Ride In The Car

Are Boxers Sicklier Than Other Breeds?

Scrolling through the Facebook feeds of Boxer dog owners’ groups, you’d be forgiven for thinking this is a disease-plagued breed.

Owners lament their dog’s constant diarrhea and chronicle their endless quests to get to the bottom of their pup’s “allergies”.

They ride the merry-go-round of drugs from steroids and cytopoint injections to Apoquel and regular Benadryl.

Should You Give Your Boxer Benadryl?

They are in and out of vet clinics and specialists’ offices.

Longtime Boxer lovers talk of their dogs as “cancer factories” and new owners take out health insurance in anticipation of a lifetime of costly bills.

There is heartache over dogs lost long before their time.

But is all this an inevitable part of being a Boxer?

The truth is just about every breed of dog suffers from an array of health problems.

The particular shape the disease takes might vary, but compromised vitality seems to be somewhat the lot of the pet dog.

What is going on here?

Why Do Boxers Get Sick?

Genetics are one factor.

But, other influences that transcend breed — like diet and lifestyle — are incredibly powerful in determining a dog’s health outcomes.

The good news is these choices are entirely within your control.

When wondering what makes a Boxer sick or healthy, some things are no-brainers.

It’s obvious that your dog needs to get enough exercise and maintain a lean weight.

However, there is increasing awareness that many practices that form a routine — and often unquestioned — part of dog ownership can actually set our Boxers up for disease.

This is shocking to discover, because these same products and procedures have been sold to owners on the basis that they are good for their dogs’ health.

How Neutering Or Spaying Affects A Boxer’s Health
What You Don’t Know About Worms & Your Boxer
How To (Safely) Protect Your Boxer From Fleas
The 90+ Contaminants In Tap Water
Most Pet Dogs Are Fat. Is Your Boxer One Of Them?

None of the above are natural, in the sense that they were not part of dogs’ lives until domestication — and, in some cases, much more recently than that.

For instance, it wasn’t until the 1930s in the United States (and the 1960s in places like Australia) that the feeding of processed foods to dogs became the norm.

If you think about it, what most of these practices have in common is they do one of two things:

It’s much more insidious than that.

Over a dog’s lifetime, they combine to create a toxic load that increases the likelihood of many serious diseases.

The majority of owners are completely unaware of the health consequences of products like chemical wormers, which have usually been recommended by their vets.

Vaccines and kibble feeding provide perhaps two of the best examples of enshrined practices that in fact predispose Boxers to ill health.

Gentry’s Paula Vandervoort advises, “Multiple puppy vaccinations have a bad reputation both in the science and holistic communities for potentially causing some very serious side effects, some of them life threatening and long term.”

But many clinics are now acknowledging that yearly vaccines are too frequent.

Vaccinating Your Boxer: A Complete Guide

The problems with kibble extend from the basic fact that cooked food is a 100 per cent unnatural diet for a dog ..to the carcinogenic compounds (known as mycotoxins) produced by the often-invisible molds that proliferate in opened bags of kibble.

These molds include one called Aspergillus flavus.

Aflatoxin B1 is the most potent naturally occurring carcinogenic substance known.

Should Your Boxer Eat Kibble?

“While some dogs have died shortly after eating mycotoxin-contaminated foods, mycotoxins kill most dogs slowly by suppressing the immune system and creating long term health problems in all organs of the body.”

While many conventionally-trained vets still perform automatic neutering and yearly vaccinations, sell kibble, recommend chemical wormers and readily dispense drugs… many others do not and instead offer alternative modalities and natural approaches with fewer side effects.

Integrative veterinarian Dr Karen Becker is a leading light in this arena.

How To Keep Your Boxer Healthy

Creating the best possible health for your Boxer involves:

How To Raw Feed Your Boxer
How Much Exercise Does A Boxer Need?
Top 10 Best Toys For Boxers
How To Fast Your Boxer
Fruits A Boxer Can (& Should) Eat

What Prednisone Did To An 18mo Boxer
The Best Supplements For Boxers (Are Not What You Think)
Itchy Boxer? You Might Be Bathing Too Often

In addition, there are plenty of commonsense actions you can take in the everyday management of your Boxer.

Don’t leave Boxers in strong midday sun that is liable to burn their pink bits, laying the conditions for skin cancer to develop.

This applies especially to white and flashy Boxers.

The muzzle, eye and other sparsely coated areas are particularly vulnerable.

Supervise your Boxer when he’s in the garden in Spring and Summer and whenever bees and wasps are active. Beware of snakes.

Manage your Boxer carefully in the presence of other dogs.

Dog parks and doggy daycare can be disastrous.

Note that sometimes male Boxers that have previously been safe with other dogs can start to have issues once they reach sexual maturity around 18 months to two years old. The danger is two-fold:

Dog fights are a real possibility depending on the exact situation and the particular combination of dogs present.

All of this operates on the level of pheromones, making conflict sometimes difficult to predict.

Similarly, two female Boxers in the same household can sometimes clash in ways so serious that owners at times end up rehoming one of the dogs.

Good health in a Boxer, as in any living thing, is a combination of nature and nurture.

Beyond choosing a responsible breeder, you can’t do much about your dog’s DNA.

However, you can do an enormous amount to predispose your pup to a long and happy life by making good choices about what you put into his body — consider all the inputs, but particularly his food.

As the author of Give Your Dog a Bone, Dr Ian Billinghurst says, the results of misfeeding “walk through vets’ doors daily”.

Don’t let yours be one of them.