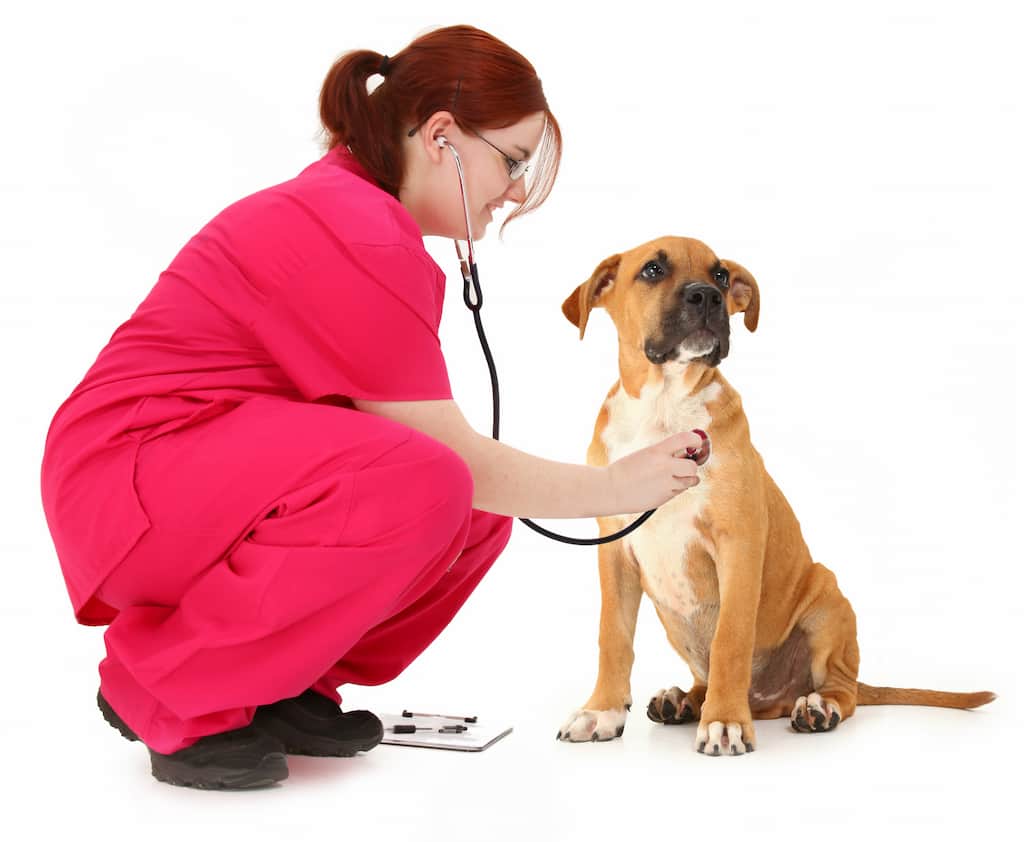 The tests range from DNA to ultrasounds, echocardiograms, x-rays and Holter monitors worn by the dog for 24 hours.

This article outlines the tests you should make sure your breeder does, while explaining the limitations of health screening.

Health testing is not a panacea.

A puppy bred from parents that have both tested clear is not guaranteed to be free of disease.

Nor are Boxers that carry the genes for certain conditions automatically excluded from breeding programs.

Boxer Genetic Testing: What Your Boxer Puppy’s Parents Should Have Been Tested For

Several heritable diseases that affect Boxers can be detected with readily available tests.

At a minimum, your puppy’s parents should be screened for:

Note that ARVC is confusingly also known by several other names:

Less commonly, you can test for:

In addition to the standard battery of tests, you will want to know a full account of your puppy’s parents’ medical history — including conditions for which there is currently no screening test but which may run in families, such as inflammatory, autoimmune conditions like:

You should also ask about any family history of life-threatening emergencies like:

Go here for more information on other health conditions affecting Boxers (but which aren’t necessarily inherited).

Note that despite commonly held misconceptions, white Boxers are no less healthy than Boxers with fawn or brindle coats.

The one condition particular to white Boxers is deafness, because it’s associated with a lack of pigment in the inner ear.

Only five to eight per cent of white Boxers will be completely deaf.

Those deaf in one ear will often show no noticeable impairment.

Here is how to train a deaf Boxer.

When And How Often Should Boxers Be Health Screened?

Tests for heritable conditions need to be done at different times depending on the test and the disease.

For heritable diseases evident at birth and detectable by a DNA test, one test is sufficient as the mutation is either there in the DNA or it isn’t.

Other diseases such as Boxer cardiomyopathy can develop later in life, necessitating repeat screening of Boxers before each breeding.

For some conditions there are minimum ages for testing, before which it makes no sense to test as the results will be unreliable.

One example is aortic stenosis/sub-aortic stenosis, which can develop after sexual maturity in Boxers that have previously tested clear.

The minimum age for testing for this condition is two years.

A Boxer’s heart should be listened to (auscultated) at each vet visit, as a matter of routine.

It should also be checked prior to any surgery, since anesthetic and the stress of the procedure place extra strain on the cardiovascular system.

Note, formal examination of Boxer hearts should be done by a qualified veterinary cardiologist, preferably one experienced with the breed.

Heart disease can present as a heart murmur in very young Boxer pups, but some murmurs are low-grade and others spontaneously resolve with maturity.

In most cases the only downside to testing is cost and inconvenience — the tests are mostly non-invasive for the dog.

However, some vets like to sedate or anesthetize dogs for x-rays.

Why Breeding From An Apparently Healthy Boxer Is Not Enough

Pet owners keen to breed their own Boxer may make the mistake of thinking that if their dog is healthy, she’s fit for breeding.

The problem is, many preventable genetic diseases including cardiomyopathy do not cause symptoms until quite late in life — nine years old in the case of degenerative myelopathy.

In other words, the disease isn’t readily apparent until long after the dog has already been bred and passed on the condition to her offspring.

The only way to know if a Boxer carries the gene for late-onset conditions like DM is to DNA test before breeding.

Willingness to undertake the necessary health screening is one of many factors to consider before deciding whether you should breed your Boxer.

Health testing is not cheap, and it’s not a “once and done” deal.

For anyone serious about doing all they can to ensure the health and wellbeing of the Boxer puppies they produce, it’s a corner that can’t be cut.

The Limitations Of Genetic Testing

It’s important to view health testing, and a Boxer’s genetic status, in the proper context.

The genes only establish a predisposition.

Of course it’s best that a dog not have the mutations that have been linked with serious diseases.

However, it’s not a foregone conclusion that an individual with the genes for a disease will go on to actually express those genes and get sick.

Tests only detect the presence of a risk factor.

They do not provide a definitive diagnosis.

Multiple Causes For One Disease

Even heritable diseases involve multiple causal factors, both genetic and environmental, which interact to produce an outcome.

It’s associated with the inheritance of not one but multiple genes, though researchers don’t yet know how many or which.

Once inherited, the severity of the disease is exacerbated by obesity, excessive exercise prior to maturity, overly fast growth rates and high calorie or supplemented diets.

One Disease Can Have Genetic And Non-Genetic Causes

It’s possible for Boxers without genetic predispositions to end up with the very same diseases via other, non-genetic pathways.

Heart disease, for instance, can be inherited …but it can also be caused by bacterial, viral or parasitic agents that are not inherited.

The resulting damage can sometimes look the same.

All of which means the offspring of two clear parents can still develop the disease in question.

Genetic screening is not a silver bullet.

It’s just one tool in the kit bag.

More on this later in the final section on how to raise a healthy Boxer of any genetic status.

Should Dogs That Test Positive For Disease Genes Be Bred?

Eradicating heritable disease from the Boxer bloodlines is, unfortunately, not as simple as removing affected dogs and carriers of the gene from breeding programs.

With ARVC, for instance, North Carolina State University found 41 per cent of Boxers had one copy of the gene mutation, six per cent had two (53 per cent were negative).

If you were to simply exclude all affected dogs, that would amount to removing almost half (47 per cent) of the gene pool.

This loss of genetic diversity would create more problems than it solved.

The difficulty is that dogs which carry the mutation also carry other important genes that it would undermine the health of the breed to lose.

There is no point getting one disease out of the Boxer line, only to cripple genetic diversity in such a way that you introduce new problems.

Breeding decisions walk a fine line between trying to avoid passing known diseases to offspring, while having those puppies benefit from their parents’ desirable attributes.

It’s crucial to keep the breeding population as large as possible to preserve genetic diversity, which produces vigour and guards against the emergence of new disorders.

Choices may be influenced by practical considerations such as available dogs, as well as technical factors like whether the disease is inherited in a dominant (requiring only one gene) or recessive fashion (doesn’t show unless the individual has two genes for the condition).

Often it’s less about blanket exclusions and more a matter of how to properly pair dogs for the best outcome, based on their genetics.

If a condition is passed down in a recessive fashion, like degenerative myelopathy, it’s possible to breed a dog with two copies of the gene to a dog that’s clear for the mutation and produce healthy offspring — albeit ones that are carriers of the mutation.

Generally though, you would not breed dogs with two copies of a mutation — guaranteed to pass on the gene, if not the outward expression of the disease — unless they were exceptional dogs overall.

Ideally, you can design a breeding program such that dogs carrying single genes for a certain disease are mated with dogs that are negative for the condition, resulting in a single dose of the mutation for some puppies and no dose for others.

Over several generations, a puppy without any copies of the mutation can be selected to replace an affected dog in the breeding program.

Sometimes it’s a matter of degree.

Dogs with low grade heart murmurs are usually regarded as fit for breeding, while those with more pronounced murmurs are not.

How To Reduce The Chances That Your Boxer Develops Disease, Regardless Of Genetic Predisposition

The emerging field of epigenetics has shown that the way an individual’s DNA is expressed is highly variable, depending on environmental factors as diverse as maternal behavior, stress, exposure to toxins, drugs and hormones.

There are several core actions you can take to set your Boxer up for the best possible health, regardless of the genes she begins life with.

Here is more information on how to take care of a Boxer puppy.

The field of canine genetics is an evolving one.

A two-year study, funded by the American boxer Charitable foundation in conjunction with the AKC Canine Health Foundation, is currently trying to identify a second gene involved in the development of ARVC in Boxers.