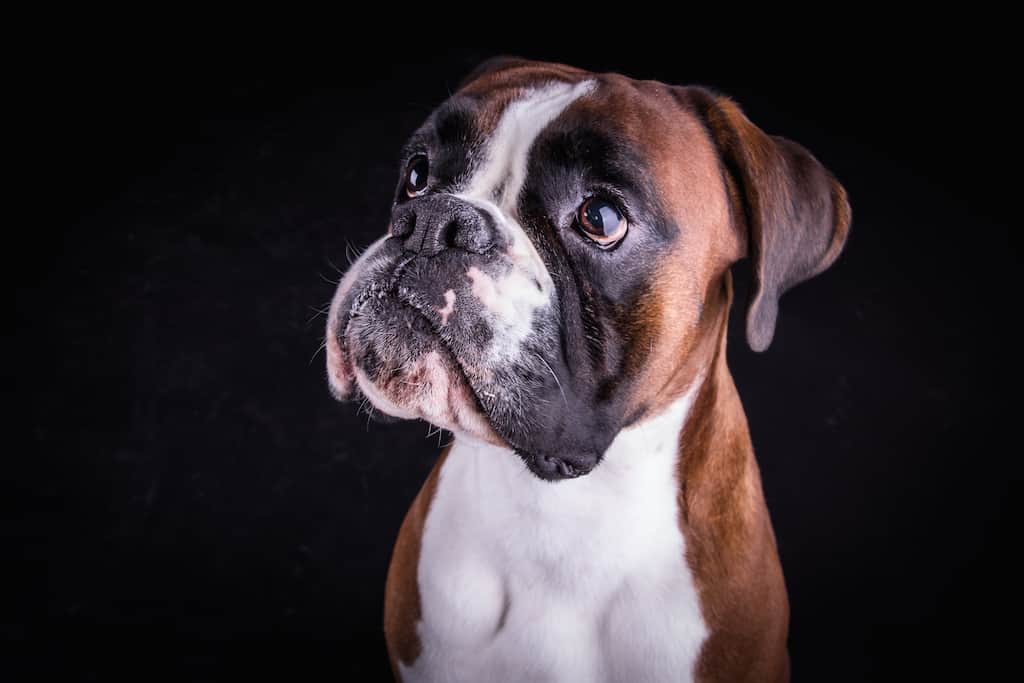 If a vet detects a murmur in your Boxer’s heart, it’s important to understand how serious the murmur is and what’s caused it.

Heart murmurs are relatively common in Boxers but most are mild and don’t automatically mean the dog has underlying heart disease.

What Is A Heart Murmur In Boxer Dogs?

A heart murmur is an abnormal sound, detectable with a stethoscope, that is heard in addition to the beating of the heart.

The murmur is created by turbulent blood flow through an obstructed valve as the heart contracts.

Types Of Heart Murmurs In Boxers

A Boxer with a heart murmur can actually have completely normal heart function.

Murmurs are classified according to severity on a six point scale:

How Serious Are Heart Murmurs In Boxers?

Heart murmurs can vary from mild to severe, as can the underlying heart disease they may indicate.

If your Boxer has been diagnosed with a mild heart murmur, chances are he’s showing no ill effects or symptoms whatsoever.

The mildest murmurs are regarded as essentially harmless, called “Innocent” or “flow” murmurs.

On the other end of the scale, a heart murmur can indicate structural heart disease.

Murmurs in very young puppies are often “soft” and tend to go away by 14 weeks of age.

If your vet hears a murmur, don’t panic and test again when your Boxer is a little older.

Diagnosis Of Heart Murmurs In Boxers

Heart murmurs can be difficult to accurately diagnose.

Studies have revealed variation between practitioners in detecting and grading low intensity murmurs.

If a dog is excited or stressed, a murmur may appear to be of a higher grade, with longer murmur duration and increased aortic flow velocities.

The possibility of getting a skewed reading and therefore a misdiagnosis underlines the importance of having a skilled vet who is experienced with Boxers.

Don’t be afraid to seek a second opinion before accepting any diagnosis or embarking on a path of further diagnostic testing.

Murmurs cannot always be heard, or reliably pinpointed, by auscultation (listening through a stethoscope).

If a murmur is detected via stethoscope, particularly if it’s thought to be severe, further testing is usually done to get to the bottom of it.

A definitive diagnosis of aortic stenosis, for instance, is best made by a veterinary cardiologist.

The specialist will use a scan called a Doppler echocardiogram, which looks for irregularities in the heart’s structure using ultrasound, assessing:

Other tests used to work out how serious the condition is and whether heart failure is present include:

Causes Of Heart Murmurs In Boxers

While many heart murmurs are minor and turn out to have no impact on a Boxer’s quality of life, they can also indicate underlying heart disease.

Heart disease can be:

Various heart diseases can create a murmur including:

In dilated cardiomyopathy, the pumping chamber of the heart weakens.

This can lead to congestive heart failure, which generally involves the following symptoms:

These dogs are at risk of sudden death from arrhythmias (irregular heart beat).

Heart murmurs may be heard in Boxers with aortic stenosis.

In aortic stenosis, a narrowing of one of the valves of the heart interferes with normal blood flow from the left ventricle to the aorta, the large artery that sends blood to the rest of the body.

The degree and duration of the murmur will reflect the severity of the underlying stenosis.

Aortic stenosis is usually not detectable at birth.

Boxers diagnosed with aortic stenosis as puppies do face the risk of having their lives cut short by the condition.

However, dogs that reach adulthood with only mild abnormalities are likely to lead normal lives.

Symptoms That May Be Associated With Heart Murmurs In Boxers

If your Boxer’s heart murmur is caused by significant aortic stenosis, you may notice symptoms such as:

Severe aortic stenosis can result in sudden death as a young adult due to “forward” heart failure (inadequate blood flow to the body from the heart’s left ventricle).

Testing For Aortic Stenosis In Boxers

There is now a test for aortic stenosis.

This adult onset means Boxers can test clear as puppies but develop the condition later.

As a result, it’s recommended not to test for the condition any earlier than two years of age in order to for the result to be reliable.

Testing is not perfect, with disagreement over what results constitute “normal” and differing opinions between experts.

Furthermore, not all Boxers that carry the genes for aortic stenosis will develop the condition.

Treatment For Heart Murmurs In Boxers

Treatment of a heart murmur depends on what is causing it.

Caring For A Boxer With A Heart Murmur

If your Boxer has a significant heart murmur, you can adapt his care to:

How Common Are Heart Murmurs In Boxer Dogs?

Boxers are among the breeds predisposed to heart murmurs.

However, noone knows exactly how common they are.

Estimates of prevalence vary from half to 80 per cent of all Boxers.

While this is a large number, the majority of those heart murmurs are minor and not connected to heart disease.

A 2001 study found only 1.3% of Boxers in the Netherlands had aortic stenosis while in Italy, a mandatory breed screening program in 2009 put the incidence at 8.5%.

Gender doesn’t appear to make any difference to a Boxer’s likelihood of developing aortic stenosis.

Other breeds with a heightened susceptibility to aortic stenosis include:

The general view is that Boxers with heart murmurs of grade 3 or worse should not be bred.

Similarly, dogs with grade 2 murmurs should only be matched to dogs that are totally clear of murmurs.

Purely from the perspective of avoiding heart murmurs and aortic stenosis, you would want your Boxer’s parents to test 100% clear for both.

The advent of genetic testing theoretically allows breeders to breed away from certain diseases.

However, eliminating any disease (or any undesirable heritable trait) is not as simple as just excluding individuals that carry the problematic genetic mutations.

The removal of a large number of individuals from the breeding population, for any reason, might address one condition.

The problem is it also has the effect of further reducing a gene pool that is already limited in any purebreed.

This genetic bottleneck increases the likelihood that other diseases will make an appearance.

After all, it’s genetic diversity that protects against the development of unhealthy lines.

Additionally, Boxers with a genetic predisposition for heart murmurs will carry other desirable genetic traits, positive traits that will be lost if breeders exclude these dogs altogether.

What’s more, confusion remains about the exact mode of inheritance.

In other breeds, the inheritance of aortic stenosis is thought to be a complex interaction of multiple genes, sometimes passed down as a dominant trait (Newfoundlands) and sometimes as a recessive one (Golden Retrievers).

Further complicating the picture, mildly affected and asymptomatic Boxers may still pass on a more severe form of the condition.

Much work remains to be done on how best to eliminate heart murmurs and aortic stenosis from future generations of Boxers.

Other Heart Problems In Boxer Dogs

Boxer ARVC is a disease of the heart muscle that affects its electrical system and can cause congestive heart failure or sudden death.

It has an adult onset and symptoms include coughing and shortness of breath.

ARVC is inherited, associated with a genetic mutation that can be tested for.

It’s usually not until about six years of age that a dog typically begins to show symptoms or that a heart monitor test known as a Holter test will return an abnormal reading.

Heart murmurs are not unusual in Boxer dogs.

In a worst case scenario they can indicate underlying heart disease like aortic stenosis which can be responsible for a Boxer dying suddenly in early adulthood.

Mild heart murmurs, though, needn’t curtail a Boxer living life to the full.

Poad, Megan, VMD, My pet was diagnosed with a heart murmur! What does that mean? Metropolitan Veterinary Associates