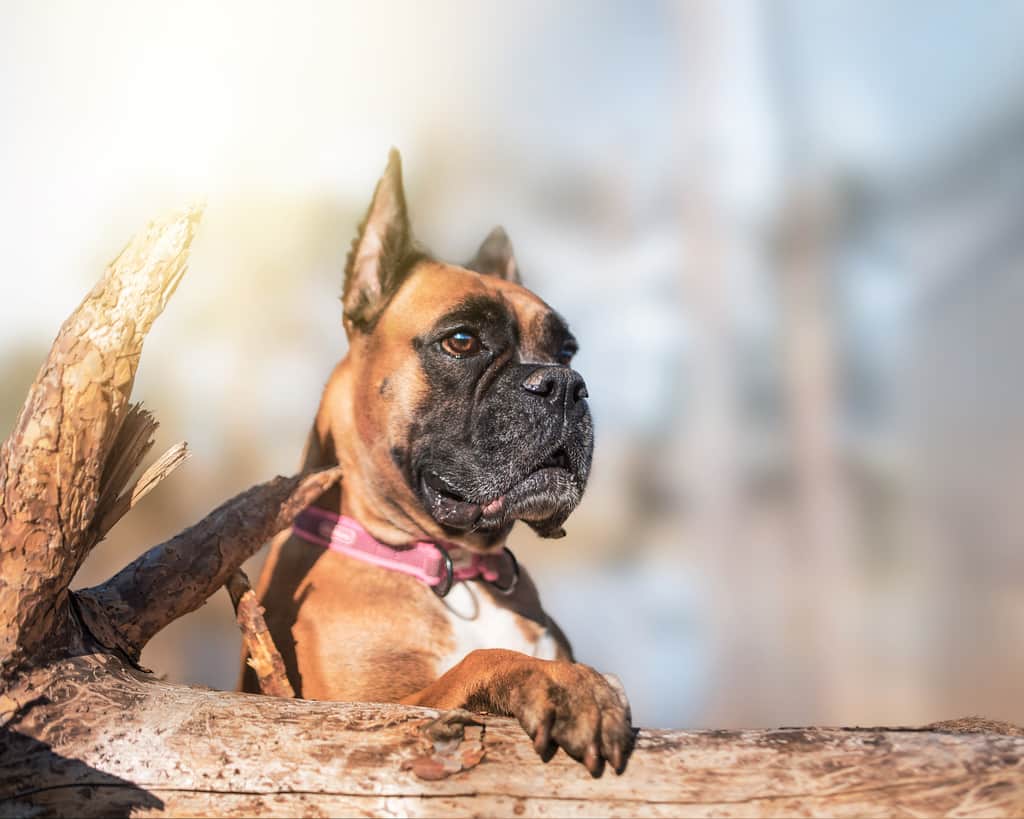 The Boxer is one of the oldest known breeds on earth, with ancestral roots tracing back to the Assyrian Empire in 2300 BC.

The modern Boxer was developed in Germany in the late 1800s, a direct descendant of two fighting breeds.

The first is the now-extinct Bullenbeisser or “bull biter”.

The second is an earlier incarnation of the English Bulldog, taller and much more athletic than today’s representatives of the breed.

What Were Boxers Bred For?

Throughout history, Boxers have been working dogs.

The breed was officially recognized as a police dog in Germany in 1925, but that’s only one of the roles the Boxer and his ancestors have performed over the years.

The Bullenbeisser was a Mastiff-type dog prized as a big game hunter for several centuries in Germany.

It was used to tackle big game, grappling bears, wild boar, deer and bison until the hunters arrived to make the kill.

The Bullenbeisser was defined less by its looks and more by character traits, which were said to include a strong impulse to fight coupled with a very hard constitution and total insensitivity to pain.

After the Napoleonic Wars in the early 1800s, the estates on which the German nobility had hunted were broken up.

Out of a job, the Bullenbeisser was repurposed as a butcher’s and cattle dealer’s dog.

His task was two-fold: control the livestock in the slaughterhouse, and protect the premises.

According to John Wagner’s The Boxer, the Bullenbeisser of this time was used widely as a guard dog displaying “great menacing substance, big bone and iron muscle”.

Despite a fearsome appearance, this dog was endowed with a good temperament.

That, and his bright intelligence, saw him work his way from the perimeter of the property into the heart of the home as a loyal companion and trusted family pet.

The Bullenbeisser was a favorite with circus folk and travelling performers, as readily able to perform tricks as guard dog duties.

By the late nineteenth century, crossbreeding of the German Bullenbeisser with the Bulldog imported from England had produced a sleeker, more elegant creature .. the first of the Boxer line that continues to this day.

The Bulldog blood is thought to have introduced the color white into the Boxer.

In fact, several of the original Boxers were all-white.

These days white Boxers are regarded as not conforming to the official Breed Standard, which currently requires that no more than a third of the body be white.

The first-ever Boxer club was formed in Munich in 1895.

The inaugural Boxer show was held in the city that same year and the initial Boxer stud book opened in 1904.

Every living Boxer’s pedigree traces back to these Munich Boxers.

The early development of the breed was characterized by a high degree of inbreeding, with dogs bred back to their parents.

According to the American Boxer Club, “setting the genetic characteristics for a new breed cannot be done in any other way”.

The “Mother Of The Boxer Breed”

No account of Boxer dog history would be complete without mentioning Friederun von Miriam-Stockmann.

Regarded as the “mother of the boxer breed”, Frau Stockmann nurtured Boxers over 60 years through two world wars and many hardships.

In the face of wartime shortages and deprivation, she kept her breeding program alive and singlehandedly created a template for the modern Boxer.

The seeds were sown when Stockman was a child, never allowed to have a dog.

At the age of 18, she moved to Munich, fell in love with the first Boxer she met — and married its owner.

The dog was called Pluto, and had “a big head, a black face and a coat like a tiger”.

The man was Philipp Stockmann.

Frau Stockmann used part of her dowry to buy a champion Boxer and the newlyweds began breeding dogs at their Vom Dom kennel outside Munich.

When World War I broke out, Phillip Stockmann went to fight, taking several of the Von Dom Boxers with him to deter snipers on the front lines.

All but one of those Boxers were killed (and Stockman’s husband later died in the aftermath of the second World War).

Frau Stockmann was left on her own to carry on breeding the Boxers that remained.

During the war she fed her dogs by rummaging for scraps in dumpsters outside military barracks and pedalling her bicycle tens of miles to source cow intestines.

Several Vom Dom Boxers ended up in America, as Stockmann was forced to part with many of her best dogs in order to survive.

Frau Stockmann’s devotion to the breed emanates from every page of her 1960 memoir My Life With Boxers:

“The Boxer .. is a gentleman amongst dogs.. He not only wants the best food, he wants to be handled in a civilized manner too.

“He can easily be upset by his master and this is called being leader-sensitive. He cannot stand a hard hand or injustice.

“It is true that he is pig-headed and every one has a personality of its own.

“His real job is to be a house and family dog and to be a friend to the children.”

When Did Boxers Come To America?

Frau Stockman’s fine specimens from the Vom Dom kennel established the foundation of the Boxer breed in the United States.

These dogs included one celebrated Boxer named Sigurd, crowned Best of Breed At Westminster in 1935.

The American Kennel Club had registered its first Boxer in 1904.

But it wasn’t until after World War II that the breed’s popularity took off in the States, as returning soldiers brought Boxers home with them.

The American Boxer’s heyday began in the 1950s when a Boxer called Bang Away broke American show dog records by collecting 100 Bests in Show, including Westminster.

He became a national celebrity in the process.

Virtually ever since, Boxers have been a favorite family dog.

The Boxer consistently graces the uppermost ranks of the AKC’s list of most popular breeds.

Based on numbers of dog registrations, the Boxer has long been in the top 10 every year.

In 2020 he was rated the 14th most popular breed of dog in America.

Why Are Boxers Called Boxers?

No one definitively knows how the Boxer’s name came about, since it wasn’t documented.

The predominant theory is that it’s a reference to the breed’s tendency to jab at opponents with his paws, like a nimble prizefighter sparring in the ring.

The Boxer’s long history demonstrates nothing if not versatility.

The popularity of the breed has crossed the continents .. and with good reason.

There is almost no task this dog has not performed at one time or another.

Nowadays, the life of the average pet dog asks far less of the Boxer than he’s capable of achieving.

What Can I Give My Boxer For Gas?