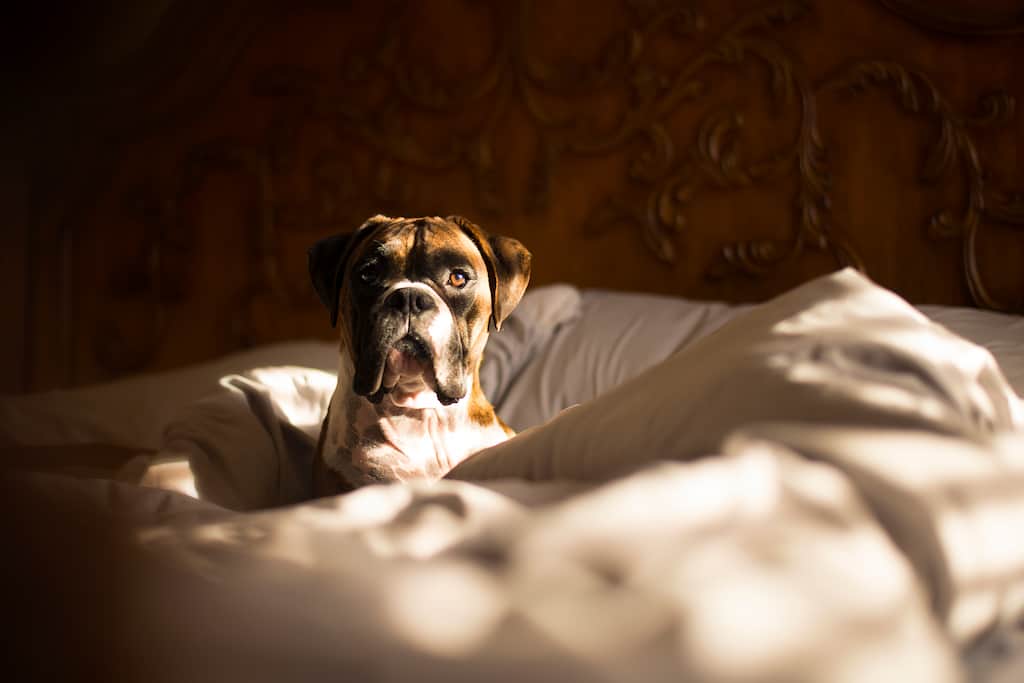 Urinary incontinence can be a challenging problem with the potential to make a Boxer’s life as an inside dog difficult.

Spay incontinence is the most common cause of urine leakage in young female Boxers, while in males the condition still occurs but is less common and poorly understood.

There are several treatments for incontinence in Boxers, but they usually don’t fix the problem 100 per cent.

Ultimately, it may be necessary to adjust how your Boxer is managed in the home.

What Is Urinary Incontinence In Boxer Dogs?

Incontinence refers to the loss of control over the bladder, resulting in urine leakage.

In many cases, a Boxer will urinate normally when going potty, but leak urine at other times.

Common times for a Boxer to leak urine include when there is raised pressure inside the abdomen such as when:

Often leakage will occur while a Boxer is resting or asleep, without her being aware it’s happening.

In severe cases, even minor movement of the body can cause leakage.

Signs Of Urinary Incontinence In A Boxer Dog

Aside from the obvious — leakage of urine — other telltale signs a Boxer is experiencing incontinence include:

Causes Of Urinary Incontinence In Boxers

An adult Boxer may begin leaking urine for many different reasons including:

The technical name for the most commonly diagnosed cause of urinary incontinence in adult dogs is urethral sphincter mechanism incompetence (USMI).

A diagnosis of USMI is settled upon after ruling out other possible causes of incontinence including:

Incontinence In A Boxer Puppy

If a Boxer puppy has continual incontinence from birth or from a very young age, it may be caused by an ectopic ureter.

Ectopic means “in an abnormal place or position”.

This condition is the leading cause of incontinence in juvenile dogs.

The ureter (as distinct from the urethra) is the tube that carries urine from the kidneys to the bladder.

In the case of an ectopic ureter, the tube bypasses the bladder and opens into the urethra instead.

Incontinence associated with an ectopic ureter may be intermittent and related to a dog’s position.

The second most common type of incontinence in puppies is congenital USMI (as opposed to the acquired USMI seen in adults).

Congenital USMI can self correct.

About half of female puppies with congenital USMI become continent after their first heat cycle.

If a young female Boxer in the prime of her life begins leaking urine, the first consideration is: Has she been fixed?

If so, there’s a fair chance the cause of the urine leakage is spay incontinence.

Incontinence is one of the many negative health consequences of spaying a Boxer that many vets unfortunately neglect to mention when recommending the procedure.

This kind of urine leakage usually has an early onset just a few years after spaying, typically by the time a dog is three years old.

It can even occur within days of an ovariohysterectomy, which is the standard spaying procedure that removes both a dog’s uterus and the ovaries.

When the hormone-producing ovaries are removed, the drop in estrogen circulating through the body is thought to result in a loss of urethral tone (sometimes called urethral sphincter hypotonus).

Besides estrogen deficiency, incontinence can also stem from spaying via several other mechanisms including:

There are many types of urinary incontinence, each caused by a slightly different mechanism.

Your vet will ask you questions about your Boxer’s bladder habits and any changes you’ve noticed.

She will physically examine your dog, perhaps including:

She may order additional tests including:

Vets used to think that incontinence was a problem affecting only female dogs.

More recently, it’s been recognized as a major issue for both genders.

Though more common in females, incontinence can affect an estimated one to four per cent of male dogs.

The exact mechanism by which incontinence develops in males is poorly understood.

There is conflicting information as to whether neutering increases the risk of urine leakage in males.

A survey of the veterinary literature reveals:

In males, USMI is less likely to respond to drug therapy with less than 44% of dogs having a satisfactory response to medication.

British researchers in 2018 made the disturbing finding that urinary incontinence can be such a problem for owners that it results in them putting their dogs down.

This makes incontinence one of the conditions that can have the heaviest impact on a dog’s welfare.

In the study, urine leakage was cited as a main or contributing reason for ending a dog’s life in 41.6 per cent of cases where dogs were euthanized.

It’s important to find ways to manage your Boxer’s urine leakage that minimize the stress and disruption caused to you and others in the household.

Treatment for urinary incontinence may require referral to an internal medicine specialist or surgeon.

Estrogens and alpha agonists can be used in combination and this may be more effective than either used alone.

Side Effects Of Drugs Prescribed For Incontinence In Dogs

Note that PPA has been associated with a range of serious adverse side effects including:

These side effects were considered significant enough that the marketing of this drug has been prohibited in Brazil since 2000.

In the US, the Food and Drug Administration has approved both the PPA called Proin and, in 2019, the extended release version Proin ER which allows the convenience of once daily dosing.

According to the FDA, Proin ER’s most common side effects are:

If drugs don’t work, there are a range of surgical options including:

Surgery comes with the risk of complications, both due to the procedure and as a result of anesthesia.

Note that Boxers should never be given the very common pre-anesthetic agent Acepromazine.

The most common post-surgical complications are difficulty urinating or inability to urinate immediately after the operation.

These problems are often transient, managed with a temporary urinary catheter.

Generally, treatment doesn’t completely fix canine incontinence but does result in enough improvement that the condition can be more easily managed.

Are Boxers Prone To Urinary Incontinence?

Boxers are among the breeds at increased risk, along with:

Small dogs overrepresented among cases of incontinence include:

Some research suggests male dogs aged nine to 12 are more than 10 times as likely to suffer from urinary incontinence as dogs under three.

Boxer Dog Having Accidents In the House

If your Boxer begins peeing in the house after being fully potty trained, consider whether incontinence could be to blame.

Other possible reasons for frequent urination or an increase in urination include:

Equipment To Help Manage Urine Leakage In Your Boxer

If your Boxer is leaking urine, a few supplies can make life easier.

Incontinence in Boxers can occur from birth, but is more often acquired as a result of spaying a female Boxer.

It is not something your Boxer can control.

The usual treatment for spay incontinence is medication akin to hormone replacement therapy in humans but adjusting the way you manage your Boxer in the home may well be a key part of the solution.