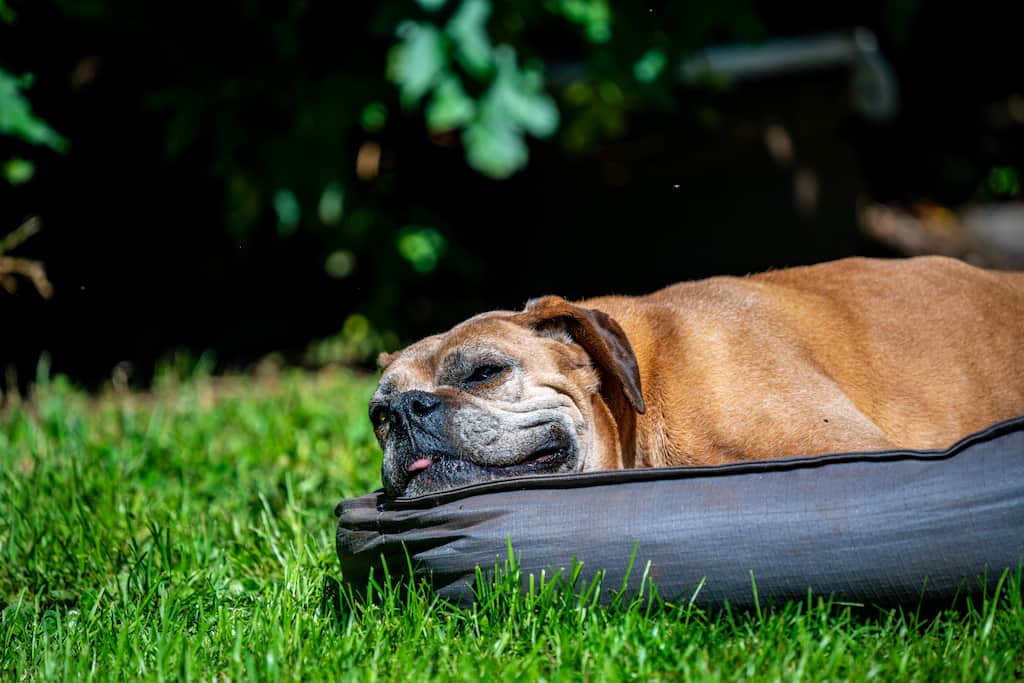 Joint problems are painful and debilitating conditions that can rob a Boxer of his joie de vivre and, ultimately, his mobility.

Hip dysplasia and other joint issues can affect Boxers as a result of an interplay of factors encompassing genetics, nutrition, neutering and exercise.

How a Boxer is managed during puppyhood, when bones and their supporting structures are growing and developing, is critical in determining his outlook for joint health, lifelong.

Many owners are unaware that too much exercise and neutering/spaying before the age of two will increase a Boxer’s likelihood of developing joint disorders ranging from CCL tears to arthritis.

Treatment options are limited to supportive care and pain management, so preventing joint damage is paramount.

Do Boxers Have Problems With Their Hips?

Joint problems Boxers can tend to suffer include:

NOTE Rear end weakness is often the first sign of degenerative myelopathy, which is not a joint disease but a neurological condition that causes progressive paralysis.

What Is Hip Dysplasia In Boxers?

Canine hip dysplasia (CHD) is the most commonly inherited orthopedic disease in dogs.

It’s both developmental and degenerative, in the sense that it arises during a puppy’s growth phase and gets steadily worse with age.

Essentially hip dysplasia refers to abnormal formation of the hip, such that the “ball” of the thigh bone or femur doesn’t fit neatly into the “socket” of the pelvis.

As a result, the two bones separate, creating a loose or lax joint.

As well as the structural defect in the joint itself, hip dysplasia typically involves weak supporting structures around the joint, including:

Consequently, the joint chafes and grinds instead of gliding smoothly.

Compounding the problem, the body sometimes tries to stabilize the joint by laying down hard, bony material, which only exacerbates things.

Over time, the unnatural patterns of wear and tear on the joint result in degenerative joint disease (DJD), a painful condition that limits a Boxer’s mobility.

Given the hip is the largest joint in the body, bearing the most weight, the impact on a dog’s life is massive.

Sore joints are not only painful but can be debilitating.

Boxers will typically hide discomfort, making it difficult to tell if your dog is suffering from joint pain.

Telltale signs of hip dysplasia and other joint problems include:

Joint problems have a variety of causes in Boxers, some of them unexpected, including:

There are several ways to misfeed a Boxer puppy, all of which will impact joint health.

As a slow maturing breed, Boxers are not finished growing and developing until around two years of age.

Which means their still forming bones and joints are vulnerable to damage for a lot longer than many owners realize.

Mistakes often made when exercising young Boxers include:

Neutering or spaying a Boxer before the age of two denies the body the benefit of the sex hormones, which play a role in moderating growth and development.

When the ovaries are removed by spaying, or the testes by neutering, a Boxer’s body experiences a unnaturally long growth phase.

This prolonged growth results in distorted anatomical proportions that, in turn, put unusual stresses and strains on the joints.

Neutering/spaying is associated with an inflated risk of hip and elbow dysplasia, patellar luxation, CCL tears, spinal spondylosis and arthritis.. as well as many non joint-related health problems.

It’s important for owners to be properly informed about the effects of neutering/spaying on a Boxer’s body.

Being too heavy increases the risk of many health problems including joint problems like cruciate ligament rupture.

Careful selection of Boxers for inclusion in breeding programs can go some way towards reducing the incidence of joint problems in future generations.

Treatment For Hip Dysplasia In Boxers

There is no medical or surgical cure for hip dysplasia.

As a result, treatment is limited to doing all you can to keep your Boxer comfortable and active.

How To Prevent Or Minimize Joint Problems In Boxer Dogs

The causes of joint problems hint at what you can do to avoid them arising in your Boxer.

And something that’s easy to overlook in connection with joint and skeletal health:

Caring for a Boxer with joint problems involves attention to:

While it may be tempting to raise bowls for a Boxer with sore joints, elevated eating platforms are not recommended because they create an unnatural eating posture that has been associated with an increased risk of deadly bloat in deep-chested breeds.

What Can I Give My Boxer For Joint Pain?

Many owners find CBD oil is an effective, and gentler, option than pharmaceutical pain killers.

Supplementation is best achieved via the diet, as outlined below.

The best supplements for Boxer dogs are whole foods.

Fish and other seafood including green lipped mussels and kelp can be good for Boxers with arthritis.

Fresh, raw eggs, as long as you scrape out and feed the shell membranes, contain:

..synthetic versions of which are sold as supplements for the relief of joint and soft tissue pain.

Similarly, apples (with the skin on) are a rich source of quercetin, a plant compound known as “Nature’s Benadryl”.

Quercetin is bottled and sold as a supplement because of its antioxidant and anti-inflammatory properties.

When you provide these nutrients in food, rather than as isolated chemistry created in a laboratory, they are complexed with other nutrients and presented to the body in a natural form.

Thankfully, with awareness and a little care, your Boxer can be bouncing long into his golden years.

Billinghurst, Ian, DVM, Give Your Dog a Bone, Warragul Press, 1993

Hedhammar, A, Canine hip dysplasia as influenced by genetic and environmental factors, EJCAP, 2007