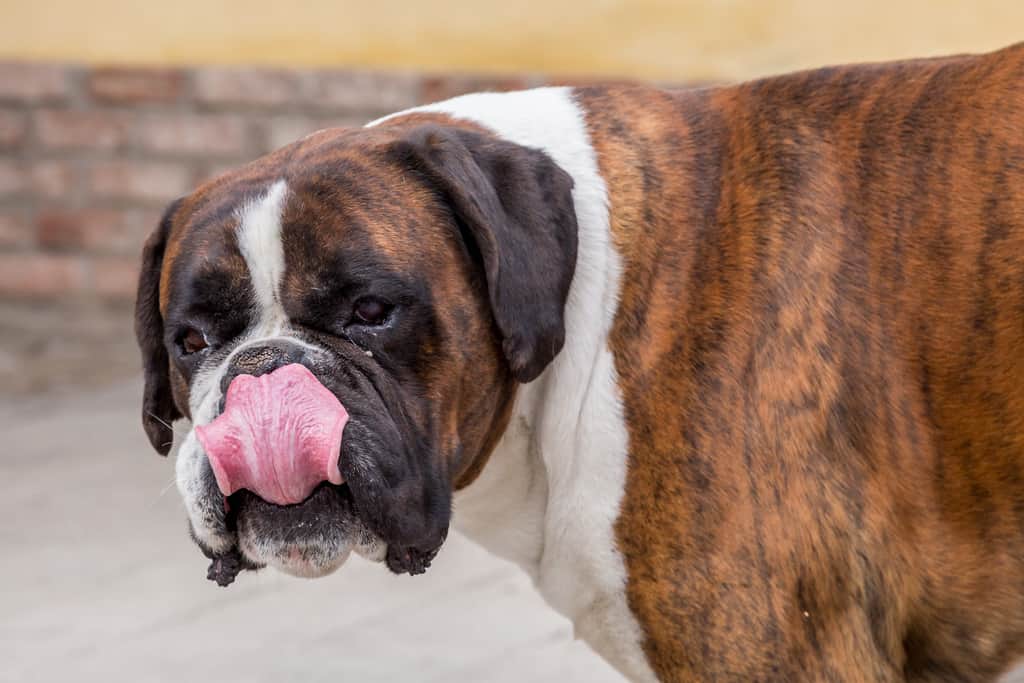 An often overlooked cause of air licking in Boxers is acid reflux, also known as gastroesophageal reflux disease (GERD).

Your dog may appear to compulsively lick the air, usually accompanied by a strange array of other symptoms — some clearly indicative of stomach upset and others harder to make sense of.

Attacks can happen regularly or only once in a while.

They might last anywhere from a few minutes, to 24 hours straight.

What Is Acid Reflux?

Acid reflux is when gastric juices escape the stomach and flow back into the esophagus, or food pipe.

These gastointestinal fluids can include bile, pepsin and stomach acid.

Not surprisingly, they irritate the esophageal tissue and cause discomfort. In humans acid reflux is often described as a burning sensation.

Symptoms Of Acid Reflux In Boxers

As well as air licking, Boxers with acid reflux commonly display several other symptoms and behaviors including:

The usual veterinary explanations for acid reflux encompass a broad range of mechanisms such as:

Surgery can also cause acid reflux in dogs.

But, leaving aside the surgical scenario, why do these problems develop in the first place?

Many dogs develop acid reflux after:

Antibiotics and steroids like prednisone are known to damage the microbiome in the gut and they also seem to affect the upper digestive tract.

Acid reflux can first present at the point of discontinuing medication or improving the diet (from kibble to raw, for instance).

In this case the reflux can be understood as part of a detox event, as a cleansing process sees long-stored toxins exit the body, including via the digestive tract.

These toxins can irritate tissues, creating the symptoms of acid reflux.

How Not To Treat A Boxer From Acid Reflux

Prolonged use of these drugs carries considerable health risks to your dog.

Drugs often appear to work for a short time.

But medicating for acid reflux does not address the underlying cause of the dysfunction and so symptoms usually return.

Owners frequently become stuck on a merry-go-round of drugs and are sold exploratory surgeries and other diagnostic procedures.

“Prescription” diets are another trap.

Check the label — these are not ingredients conducive to healing.

These products are highly processed and bear no resemblance to a dog’s natural diet.

How To Heal Acid Reflux In A Boxer Dog

The experience of owners with dogs suffering acid reflux is sad testament to the fact that a lasting solution to the condition can’t be bought in a bottle.

Likewise, home remedies for acid reflux in dogs including slippery elm bark powder and yoghurt may initially offer some relief, but rarely does it last.

Rather, healing acid reflux requires a more holistic approach that addresses the problem at its source, instead of simply suppressing symptoms.

While the medical model conditions us to ask “What can I add?”, owners typically have much more success by removing cause and setting in place the conditions for optimal health.

In this way, the body’s in-built detoxification processes are supported, and gut repair and regeneration promoted.

Acid reflux can be healed without drugs using a combination of:

Feeding a fresh, biologically-appropriate diet is step one to healing any health problem, as is minimizing the toxic load on the body, which is a recognized cause of aging and disease.

For all these reasons, fasting is a powerful healing modality employed by holistic vets, though not often within the repertoire of conventionally-trained ones.

Fasting is particularly important when the issue to be healed is a digestive one.

Be sure to always have fresh, pure water available during fasting. (Not tap water. Here’s why.)

Unfortunately, the highly disruptive nature of acid reflux as a condition, and the distress of witnessing a dog suffering repeated attacks, often prompts owners to resort to medicating their dogs.

This increases toxic load on the body, fails to address cause and derails the healing process that is possible with patience, time and proper feeding.

How Long Does It Take To Heal Acid Reflux?

Gut epithelial cells are replaced on average once every five to seven days, a regenerative capacity that is conducive to the healing of GI disorders.

However, acid reflux takes time to develop. Similarly, healing can take months and years with a gradually decreasing frequency and severity of attacks.

Persistence is key as symptoms can appear to get worse for a time, before they get better.

How To Prevent Acid Reflux Attacks From Starting

While you are working on healing your dog’s acid reflux, you can help minimize the number of attacks by taking steps to make digestion as efficient as possible.

It is imperative not to feed a dog that is having an acid reflux attack.

Withhold food for at least 24 hours after the symptoms have stopped. An empty stomach is far less prone to acid reflux.

During an attack, you may be able to minimize the severity and duration of symptoms by:

Is Your Boxer Living His Best Life?

Supercanine is your how-to guide for understanding why your dog has the health niggles he does, and how to heal them before they progress into a full-blown crisis.

If you want to know how to raise a healthy, long-lived wigglebutt free of allergies, itch, acne, “yeasty” ears, paw gnawing, acid reflux and all the other afflictions chalked up to “just part of the breed”, this is the book for you. No more vets, potions or complicated regimes. Just simple yet powerful tweaks you can make to your dog’s care to transform his health.

Other Causes Of Air Licking In Boxers

Sometimes licking can be associated with a neurological event or seizure — this will look quite different to lip smacking due to acid reflux. During an acid reflux attack, the dog is in no way cognitively absent or zoned out.

If your dog is experiencing an isolated instance of licking his lips, it may be as simple as having something stuck in mouth.

Check inside, including for anything that may be lodged between the teeth or in the gums. If a foreign body in the oral cavity is to blame for the air licking, the other symptoms associated with acid reflux will, of course, be absent — although you may still notice drooling, which is a general sign of nausea in dogs.

If your Boxer dog is smacking his lips for no apparent reason, consider whether it could be acid reflux.

Look for other classic symptoms of GERD like jaw snapping, neck stretching, loud swallowing and drooling.

A course of drugs, poor food or other sources of toxicity can create acid reflux in Boxers.

Drugs are often prescribed to moderate symptoms but an overhaul of the dog’s total care, including diet, is required to actually heal the condition.

Understanding how the intestine replaces and repairs itself, Javier Barbuzano, The Harvard Gazette, July 14 2017