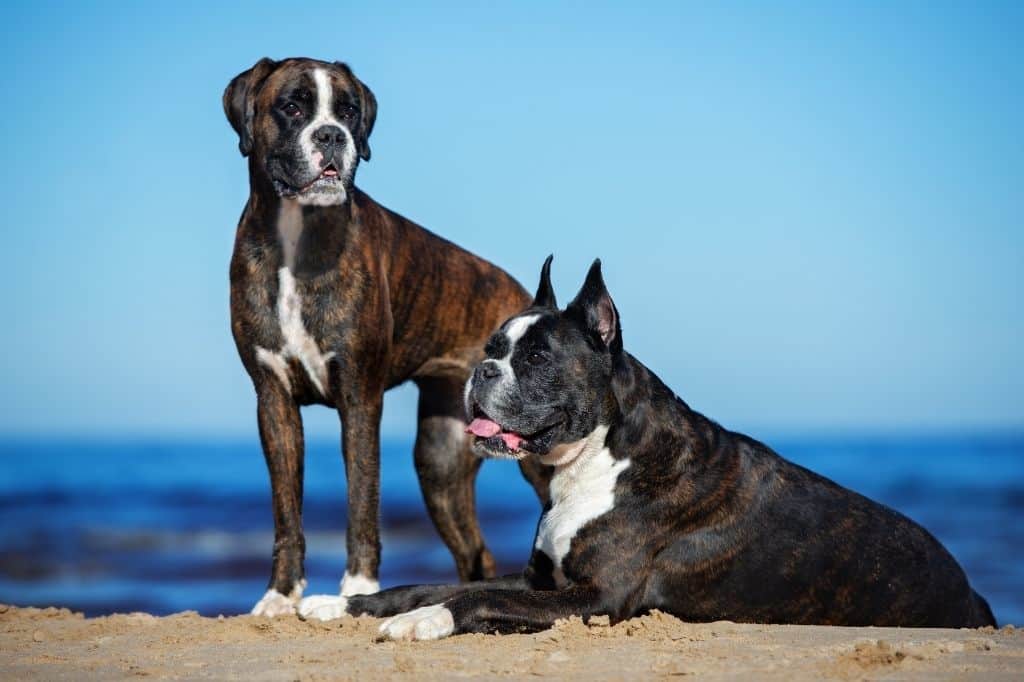 Owning a male Boxer is a little different to owning a female.

There are practical considerations that may influence your preference for a male over a female Boxer, or vice versa.

The most obvious differences between male and female Boxers are that a female will have heat cycles and a male will engage in scent-marking behaviors.

Owners and breeders do observe personality differences between males and females, but gender is no guarantee of a certain temperament.

How Big Does A Female Boxer Get?

According to the American Boxer Club official standard, a female Boxer is 21.5 to 23.5 inches tall at the withers.

The withers is the ridge between the shoulder blades, the tallest point of the back.

How Big Is A Full-Grown Male Boxer?

Male Boxers tend to be slightly larger than females, measuring 23 to 25 inches at maturity.

But an individual Boxer’s build is also influenced by his or her bloodline, regardless of gender.

Which Is Easier: A Male Or Female Boxer?

Whether you find a male or female Boxer easier to live with depends on what you consider difficult.

There are pros and cons to both males and females.

Each sex comes with associated behaviors and issues that will need to be managed.

In some ways, male Boxers make an easier pet.

There are no heat cycles to worry about and no chance of unplanned pregnancies.

However, male Boxers can be more challenging to manage with other dogs.

Male Boxers can be more prone to conflict with dogs outside the household, due to their territoriality.

This can be more pronounced with intact Boxers.

Intact male Boxers are also commonly the target of aggression from other males at dog parks, particularly when those dogs are themselves intact.

Because of their intact anatomy, they can be perceived as a reproductive threat by other males.

But gender is only one of the factors at play.

The outgoing and in-your-face Boxer style may also have a role in eliciting these aggressive responses.

Boxers, particularly young ones, are sometimes seemingly unaware that other dogs may not always be friendly.

The Boxer’s fearlessness can put them in harm’s way when interacting with dogs of unknown temperament or that are untested in combination with your dog.

Of course, how social situations unfold will have a lot to do with supervision, and training.

Another major variable is how dominant or submissive your dog naturally is.

Is your Boxer an alpha dog with a tendency to regard himself as the leader of any given pack?

(When choosing a Boxer puppy, regardless of gender, it’s best not to pick the most dominant, outgoing littermate.

Equally, it’s a good idea to avoid taking the most submissive pup.)

If your lifestyle and location don’t put you in contact with many other dogs, and you don’t plan on frequenting public places off leash with your Boxer, this may be less of a concern.

As far as management at home, intact male Boxers can be driven to roam if they detect a nearby female in heat.

You will need to be sure your male Boxer is securely contained with a good fence.

Males will engage in scent-marking behaviors, diligently peeing on every tree, fence post or object that rises above the landscape by even an inch.

This is a natural, hard-wired biological drive.

But it does mean that walking a male Boxer down the street will usually involve far more stops and detours than walking a female.

(Scent marking inside the house is a problem behavior not usually encountered with male Boxers, intact or neutered.

When this arises, it can be a function of the dynamics between dogs within the household.

If you’re encountering this issue, there are devices called belly bands to help you un-train it.)

A female Boxer might be easier if you don’t mind dealing with a little mess when she goes into heat.

There are doggy diapers called “bitch’s britches”, complete with holes for the tail, for this purpose.

Even without them, most dogs are pretty good at keeping themselves clean.

A towel laid where she likes to lie is usually enough to protect bedding.

You will need to make sure your intact female is kept separate from intact male dogs in the household, and in the neighborhood.

But female Boxers generally only come into heat once or twice a year.

It is sometimes said that two female Boxers are harder to combine harmoniously in one household.

Some Boxer rescues reportedly refuse to adopt females out to homes where there’s already a female.

On the other hand, breeders typically have as many as five female Boxers living under the same roof without problems.

Whether your Boxers get along will largely come down to how well you manage them and what kind of leadership you provide as the head of the “pack”.

Two males may vie for dominance just as easily as two females.

This kind of conflict can even arise as a result of “littermate syndrome” which occurs when two pups (from the same litter or different litters) are raised together.

Opinions differ but some owners and breeders believe that male Boxers are more emotional or “sookier” than females, and can tend to be more wounded by any kind of scolding.

But this is far from an exact science.

There are conflicting accounts of which gender is more laidback, which is more stubborn, which is easier to train.

Boxers as a breed are smart, happy dogs that are good learners, as long as you keep training fun.

When it comes to obedience, both genders have the capacity to be strong-willed and to develop selective hearing.

Some say females can be better with very small children but just as many owners will vouch unreservedly for how good their males are with kids.

More than gender, your Boxer’s temperament and behavior will come down to breeding, socialization, training and the individual personality of the dog.

The behavioral differences between male and female Boxers are much less dramatic when dogs are desexed.

However, owners are increasingly aware of the downsides to neutering/spaying.

The removal of the hormone-producing sex organs is known to make many diseases more likely, including several conditions Boxers are already prone to — like mast cell cancers.

This higher incidence of disease is observed in both neutered males and spayed females.

The effect is worse the younger the procedure is done.

Do your own research and be wary of conventionally-trained vets who still advocate automatically desexing a Boxer and don’t make you aware of the health consequences.

This is a slow maturing breed and no Boxer should be desexed until at least two years of age, preferably not at all from a health perspective.

Many owners conclude that any extra effort involved in managing an entire male or intact female Boxer is well worth it, in order to have a healthier dog.

The convenience of having a female without heat cycles, or a male less intent on scent marking, is quickly forgotten when a beloved Boxer gets seriously (and preventably) ill.

Ultimately, the choice between Boxer puppies ought not be made on account of gender.

There is no solid basis for thinking a male or a female Boxer will make a better family pet.

Both genders can go either way, depending on the environment you provide.

Choose your Boxer based on the connection you feel with the individual pup.

Rest assured, the kind of dog your Boxer grows into will be, above all, a reflection of you, and how you raise him or her.