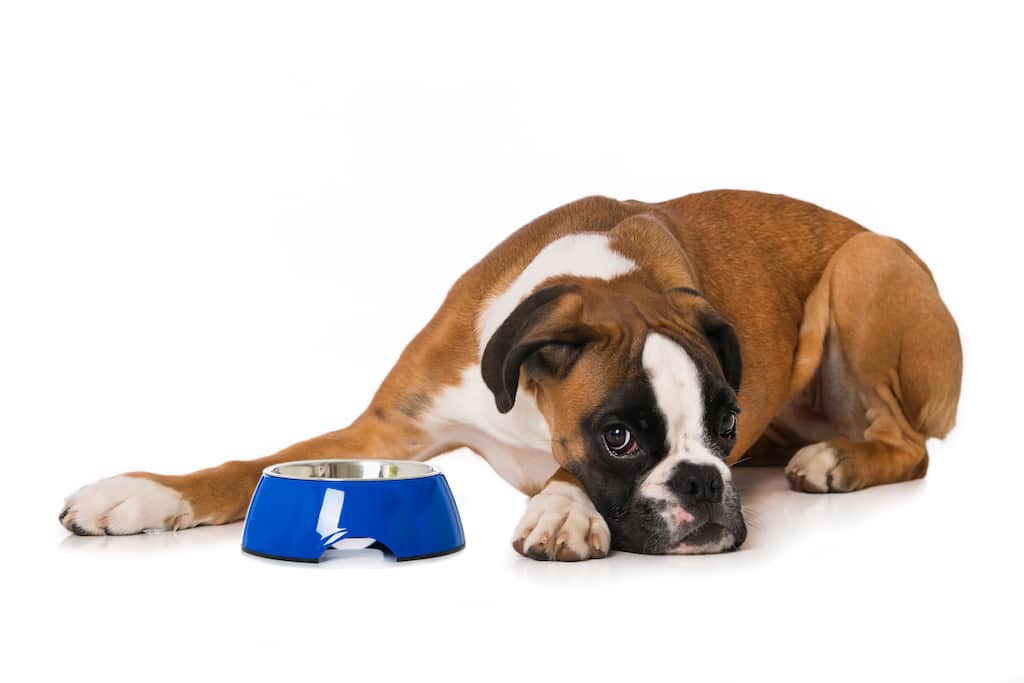 While a Boxer not eating can occasionally indicate a major problem like a blockage or poisoning, in the absence of other signs of illness, it’s not usually cause for alarm.

A refusal to eat, however, is a very good reason to evaluate what you are feeding your Boxer and to fix any shortcomings: inappropriate diet is often why a Boxer goes off her food.

If you’re already feeding a proper diet based around raw meaty bones, you needn’t do anything at all — if your Boxer is feeling a little off, fasting is actually the quickest way to heal.

The worst thing you can do is force-feed or coax a self-fasting Boxer to eat when she’d really rather not.

I am not a vet. This post is for general informational and educational purposes only. I encourage readers to view my full disclaimer. Boxer Dog Diaries is reader powered. I may receive a small commission, at no extra cost to you, if you make a purchase via links I share. Thank you for your support.

There are a range of reasons your Boxer might stop eating for a while, some of them deadly serious and others nothing to worry about.

Causes of appetite loss in Boxers include:

Let’s examine each of these situations.

Consider the possibility of a blockage if your Boxer is not eating and also shows other signs of illness such as:

The chances of an obstruction (or something else serious and urgent) being the cause of inappetance go up if:

Objects that vets commonly have to surgically remove from dog’s GI tracts in order to save their lives include:

Dogs are sometimes able to pass these things on their own, but they present a very high risk and surgical intervention may be necessary to remove the obstruction.

Such operations don’t always have a positive outcome so it’s imperative to:

Likely sources of poisoning for pet Boxers include:

Though it’s unclear how grapes cause death and severe illness for some dogs and not others, it’s safest to avoid them.

There are plenty of other fruits you can safely feed your Boxer.

Boxers can be poisoned and frequently break out in hives after exposure to a range of common household products and personal care sprays including:

…all of which are made from chemicals that are aerosolized and inhaled by your Boxer.

Invest in a steam cleaner like the Karcher SC 3 EasyFix and keep your home spick and span without the use of toxic chemicals.

Periods of fasting are a natural part of how dogs eat in the wild.

Eating every day is a human invention, completely unnatural for dogs.

This is in line with how wolves and dogs in natural settings eat, according to cycles of scarcity and abundance.

Wild dogs eat more like once every three days to a week, feasting when prey is available and then fasting in between times.

The average dog can go for many days and weeks on her bodily reserves.

Not only is this not a problem, there is an increasing body of scientific evidence that fasting confers many health benefits to just about every species on earth, such as:

Many dog owners routinely feed their dogs once every several days and see them maintain weight beautifully and brim with health.

9 Reasons To Fast Your Boxer

A self-fasting Boxer may simply not be hungry.

It can be that straightforward.

Unfortunately the average pet Boxer is overfed and overweight, either as a result of being given too much food or through fat overconsumption, symptoms of which include:

Overeating is among the many reasons not to “free feed” your Boxer by leaving food out all the time.

From time to time a Boxer may eat something she shouldn’t.

As long as whatever she’s eaten is not poisonous or in large quantities, your dog’s body will usually be able to sort it out with a short fast.

Keep a close eye for the development of more serious symptoms but give her some time and a little rest, making sure fresh, pure water is always available.

How Tap Water Can Make Your Boxer Sick

Boxers can be sensitive souls.

It is not unusual for a Boxer to lose her appetite if she’s feeling emotionally or mentally discombobulated.

This may be the situation if your Boxer’s inappetance coincides with:

How To Introduce Your Boxer To A New Puppy

A Boxer may stop eating on account of something going on, beneath your awareness, in a multidog household such as:

Heat cycles affect not just the female Boxer but can have a dramatic effect on unneutered male dogs in her orbit, with some males refusing to eat as they focus singlemindedly on the reproductive opportunity at hand.

When A Boxer Goes Into Heat: What To Expect

If you suspect some pack dynamics could be at play, feed your Boxer away from the other dogs so she can relax while eating.

If your Boxer is kibble-fed and refusing to eat, there is no mystery.

Her instincts are spot on.

Why Kibble Is Inappropriate Food For Your Boxer

Instead, offer a fresh, natural biologically-appropriate canine diet and watch her appetite return with gusto.

If your Boxer is a “picky eater”, chances are she’s simply trying to tell you you’re offering the wrong kind of food.

Why Your Boxer Is A “Picky Eater”

All too frequently, commercially manufactured dog food is recalled due to contamination by bacteria like salmonella or mold spores.

When it grows in opened bags of kibble, mold makes mycotoxins including the Aspergillus flavus mold, which produces Aflatoxin B1, the most potent naturally occurring carcinogenic substance known.

These molds are invisible and dogs are not usually able to taste or smell the mycotoxins but their noses are incredibly more powerful than ours: if your dog is turning her nose up at something, pay attention.

Don’t make her eat it, and throw out the rest of the suspect bag.

Drugs and other pills commonly given to dogs can cause stomach upset as part of their side effects.

Your Boxer may be feeling off if she’s received:

Here is what prednisone did to the author’s 18 month old Boxer.

Reaction To A Supplement

Supplements are usually synthetic chemicals made in a lab, but not regulated in the way drugs are.

If your Boxer is receiving any kind of supplement, evaluate it as a possible cause of any stomach upset.

While most dogs leap at the chance to eat fresh, real food, your Boxer may experience a period of adjustment when you switch from kibble to a raw diet.

It’s not dissimilar to the reaction of a child used to eating junk food, who’s then offered an apple instead.

Persist and you will see your Boxer’s taste buds reset.

A short fast can be helpful.

7 Day FREE How To Raw Feed Your Boxer eCourse

Such a large range of illnesses have loss of appetite as one of their symptoms it’s almost of no help to list them.

They run the gamut from cancer and autoimmune disorders to liver disease, metabolic disorders and endocrine problems — not to mention psychological disturbances including depression and anxiety or fear.

Is Your Boxer Scared Of Everything?

Some of the serious conditions with loss of appetite among their symptoms include:

Not eating is a very common and non specific symptom that on its own tells you very little.

In almost every case, if your Boxer is in the grip of a serious disease process, loss of appetite will be just one of the abnormalities you notice.

It will be the whole constellation of symptoms that will give you a better clue as to what might be ailing your dog.

Although it is not generally associated with loss of appetite, bloat or gastric dilatation-volvulus is such a life-threatening eating-related condition that it bears mentioning.

Bloat occurs with increased frequency in deep-chested breeds like Boxers and is a true veterinary emergency that won’t resolve on its own and requires urgent intervention to avoid death.

Raised bowls increase the risk of bloat in Boxers.

Bloat In Boxers
Raised Bowls: Never Use Them With Your Boxer

Note that “sensitive stomachs”, constant gas and bad breath are not “just part of being a Boxer” and are most often a sign of poor diet (usually kibble).

What To Do When A Boxer Dog Won’t Eat

If your Boxer is not eating:

What Not To Do If A Boxer Dog Refuses Food

Common but misguided responses to a Boxer refusing to eat include:

These responses all miss the mark.

While diet is the right place to look when a Boxer is anything less than enthusiastic about food, replacing one highly processed option with another that’s equally as processed is not the answer.

Nor is it ever a good idea to try to cajole a self-fasting dog to eat or to disguise or “dress up” something your dog’s instincts are telling her to avoid.

How Long Can A Boxer Dog Go Without Food?

Days, weeks and longer as explained in the fasting discussion above.

Dogs will eat when they are hungry.

It’s more of a concern if a Boxer puppy stops eating than if the same occurs in an adult.

If it comes down to it, you can syringe water into your pup’s mouth to keep her hydrated.

Feeding water-rich fruits like watermelon is a fast way to hydrate a dog while providing a lighter meal than meat.

If your growing Boxer puppy is eating but just no longer showing interest in three meals a day, it may simply be an indication it’s time to reduce to twice daily feeding.

What Fruit Can A Boxer Dog Eat?

How Much To Feed A Boxer Dog

How To Put Weight On A Boxer Dog

Dogs at the end of their lives commonly stop eating as they prepare to pass.

If your senior Boxer’s appetite has simply lessened, this is normal and usually in line with lower activity levels.

Be careful not to overfeed a senior Boxer as excess weight stresses joints and contributes to disease.

If your Boxer temporarily stops eating, it’s not necessarily a sign of a major problem.

Be aware that not eating, when it occurs in combination with other symptoms, can indicate a blockage or poisoning, and these should be considered if it’s possible your dog swallowed something dangerous.

Usually though, it’s a minor stomach upset that will self correct in a day or so.

Trust her instincts and know that the average dog has enough reserves to go for long periods without food.

Not only is fasting not bad for your Boxer, it is incredibly health promoting.

Becker, Karen, DVM, A Way of Life for Wild Canines, This Could be a Godsend for your Dog, Mercola Healthy Pets, 2018