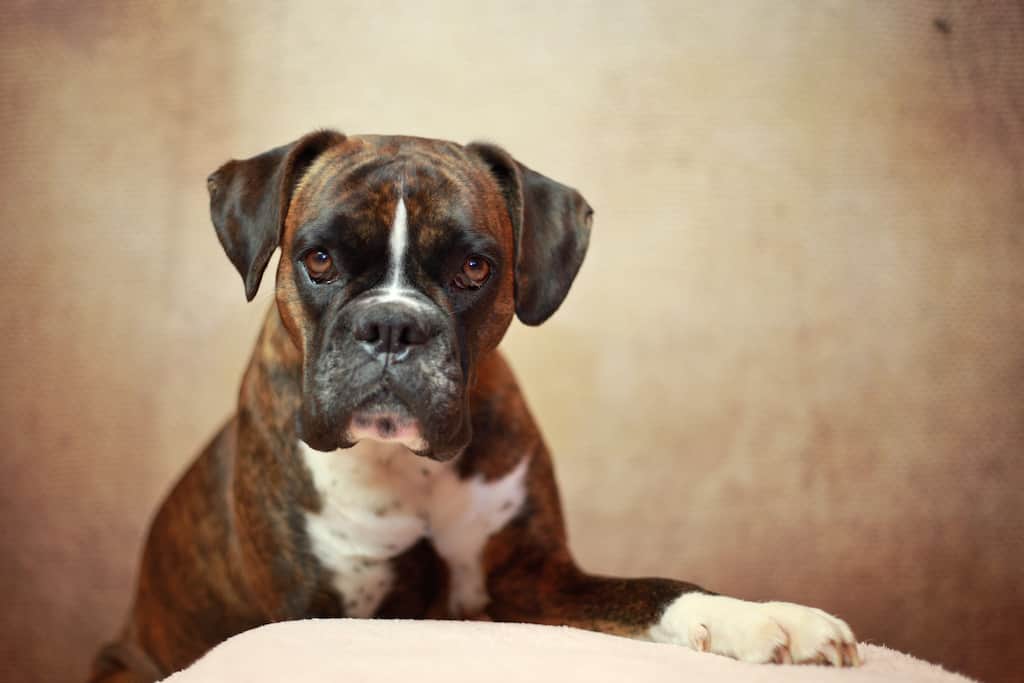 Boxers are low maintenance dogs, making their paws possibly the area you will need to pay most attention to when grooming.

Caring for your Boxer dog’s paws involves more than trimming the nails.

You do not need to outsource any of this to a groomer or vet.

I am not a vet. This post is intended for general informational and educational purposes only. I encourage readers to see my full disclaimer. Boxer Dog Diaries is reader supported. I may receive a small commission, at no extra cost to you, if you make a purchase via links I share.

Paw care is much better done by you, at home.

It’s lower stress for your dog, it’s free, and it allows you to do a little, often, instead of doing a lot all in one go.

This way, your Boxer’s paws stay in optimal condition all the time, not just for the week after the visit to the groomer’s.

Truthfully, you — as the owner — will also do a better, and gentler, job than anyone else.

Does your Boxer hate having his paws touched and won’t let you trim his nails?

Don’t worry, there are ways to change this.

How To Cut Your Boxer Dog’s Nails

It’s best, by far, to grind your Boxer’s nails rather than attempt to use a guillotine-style clipper to cut them.

Cutting is much riskier than grinding — with a blade, you can easily nick the blood vessel and nerve if you misjudge the position of the quick.

When you grind, you use a rotating cylinder covered in what is essentially coarse sand paper.

Even if you get it wrong, the worst that can happen with a grinder is your Boxer feels a small scraping sensation.

With a grinder, your dog has a chance to let you know you’re getting too close before any damage is done.

To grind your Boxer’s nails, we recommend a Dremel tool.

Here is a detailed guide describing how to get your Boxer used to the nail grinder tool, and how to use treats to train him to tolerate, and even like, having his nails trimmed.

Especially if your Boxer is funny about his nails being done, it’s best to do this yourself at home — that way you can desensitize him to it, over time using ultra short sessions and food rewards, rather than resorting to forcefully restraining him and using a muzzle to get it done against his will at the vet’s.

That is a highly stressful experience your Boxer doesn’t need.

Unless you are running your Boxer on very unusual and hostile terrain, there is no need for paw balms or dog boots.

Balms collect dust and contaminants and are inevitably licked off and consumed by your dog — not a substance you want in his body.

Short of your Boxer working as a sled dog and using musher’s wax, balms are a largely unnecessary product sold to dog owners through clever marketing.

Boots may work in some circumstances but can cause as many problems as they solve in terms of the potential to interfere with the gate and to create abrasions if they don’t fit properly.

But paws are just skin and not as tough as they look.

It’s easy to forget your Boxer is always barefoot, while you have shoes.

Avoid walking and running on surfaces that would hurt your own feet, such as ones that are:

Prevent or minimize your Boxer’s exposure to:

It’s a good idea to rinse off your dog’s paws after coming inside from walks so the various toxins don’t remain on the feet to be absorbed, or licked off and swallowed.

Be sure to dry the paws afterwards as warm, moist environments like between the toes and paw pads encourage yeast overgrowth — although this is mostly a dietary issue, as we’ll see next.

As with all parts of your Boxer’s body, paw health is largely achieved from the inside out.

In the same way that skin problems often stem from poor diet, dry and cracked paws in Boxers are often a reflection of misfeeding.

A fresh, natural canine diet consisting of raw meat, bones and offal is much more hydrating, and healthier in every way, than kibble.

If your Boxer’s paws smell like Fritos, or the fur or nails have a reddish brown discoloration, your dog likely has an overgrowth of yeast.

Yeast is a single-celled fungus that lives naturally on the surface of a healthy dog’s skin.

It only causes a problem when it overgrows.

And, like any species, it can only overgrow when it has the overabundance of food needed to sustain a population explosion.

Whatever is on the skin.

Here’s where diet comes into play, along with anything else your dog ingests e.g. chemical dewormers or flea/tick chemicals.

In a properly fed, healthy Boxer, the primary organs of elimination i.e. kidneys and bowels (pee and poop) are able to keep up with the task of filtering and excreting waste.

However, when a dog eats a highly processed diet of kibble or canned dog food, his body is overburdened with waste.

This excess waste has to be ejected — and fast — if the body is to maintain a pristine internal environment and avoid the toxic accumulation that leads to disease.

And so the body enlists its largest organ, the skin, as a kind of emergency lever or pressure-release valve.

It uses the skin to push out wastes and toxins.

Sometimes these wastes are hived off into swellings or cysts that appear between the paw pads.

These lumps serve the purpose of storing waste, out of circulation, until such time as the body can catch up with the backlog, resorbing the toxins and expelling them through the regular avenues — or occasionally expunging them by bursting open to the surface.

Usually something less dramatic happens, metabolic waste expelled through the pores and hair follicles to sit on the skin where it may cause irritation due to its acidity or, most commonly, feeds the yeast and other microbes living on the skin.

This yeast is doing a job, in that its consuming the waste and cleaning it up.

But it also creates itch and an unsightly staining of the skin, fur and nails.

So, yeast is a sign of the body’s efforts to detox.

The solution is not to have your dog ingest antifungals to kill the yeast, which is both messenger and nature’s clean up crew.

Instead, the lasting solution lies in fixing the inputs i.e. cleaning up the diet to feed a fresh, natural canine diet to your Boxer and avoiding chemical dewormers and flea/tick treatments etc in favor of non-toxic approaches to parasite control.

Here is what you should know before choosing to feed kibble to your Boxer and how to deal with yeast “infections” in Boxers.

Trimming Hair On Your Boxer’s Paws

When you’re trimming your Boxer’s nails, check whether any hair is growing long and poking out between the paw pads to cover them up.

When this happens, carefully trim the hair back with a pair of nail scissors.

If you allow it to grow long and form “slippers” it interferes with your Boxer’s grip and makes him more likely to slip and slide on smooth surfaces like floorboards and tiles.

Slipping creates the risk of injury and adds unnecessary strain to joints, so it’s worth avoiding.

Make sure you Boxer is familiar with the scissors, and relaxed about them, before bringing sharp objects close to the paws.

Checking Your Boxers Feet For Injuries, Foreign Bodies And Ticks

It’s a good idea to regularly examine your Boxer’s paws to make sure they look and feel as they should.

Pay attention, too, to how your dog is treating his paws.

If your Boxer is licking his paws or gnawing at his feet, here is what might be going on.

If your Boxer ever starts limping, check the paw pads for splinters and between the toes for pebbles.

If your Boxer jumps up stairs onto a wooden deck, be sure to place rubber mats or something similar in the spot, to cushion his landing and prevent splinters.

Ticks can hide between the toes and paw pads too, so inspect the feet thoroughly — using a flashlight if necessary.

Minor cuts to the paw pads can result from stones and will usually heal on their own.

Ordinarily there is no need to apply any creams or lotions — just rinse out the dirt, keep the wound clean, and have your dog rest if it’s bothering him.

Paw care in a Boxer is not complicated but it does require regular maintenance to trim nails and hair and inspect the feet for any foreign bodies.

Avoid injury and chemical burns or poisoning by making smart choices about what surfaces you have your Boxer walk and run on.

In the city be conscious of chemicals on grass, roadside verges and sidewalks.

Beyond that, paw care comes down to proper nutrition: feed a fresh, raw diet for whole body health.