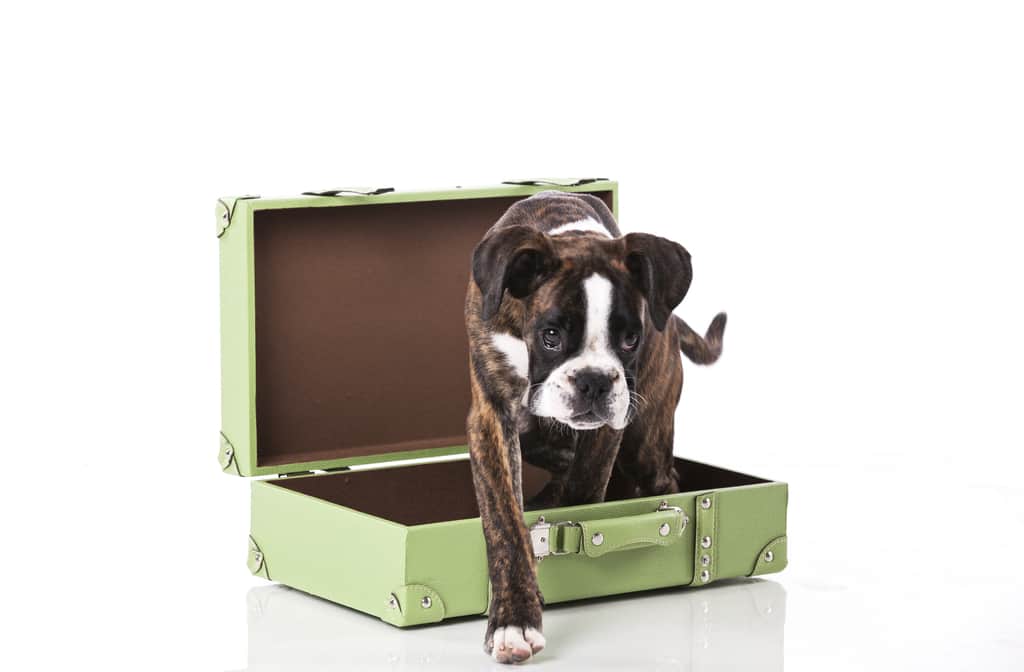 Boxers should never be flown as cargo on planes — dogs have died this way.

In fact, the major US airlines will no longer fly Boxers as cargo because their brachycephalic (snub-nose) heads make them prone to breathing difficulties during air travel.

If you need to travel with your Boxer, you’re going to want to take a road trip.

There are two exceptions to this.

1. If your Boxer is a puppy she’ll be small enough to go in the cabin with you, in a carrier.

2. If your dog is a trained service dog, she’ll be allowed to accompany you in the cabin.

Note: As a result of a ruling from the Department of Transportation in December 2020, Emotional Support Animals are no longer permitted to sit in the cabin with their owners.

The rule tightening comes after reports that owners without documented disabilities were abusing the system, taking pets in aircraft cabins by having them falsely declared ESAs.

The DOT said an increasing number of people were “fraudulently representing their pets as service animals”.

Why Boxers Should Never Fly In Cargo Holds Of Planes

Along with Boxers, US airlines have banned from the cargo hold a number of other snub-nosed breeds including:

The ban is not without good reason.

Before “brachy” breeds were put on the airlines’ restricted breed lists, the US Department of Transport found short-nosed dogs accounted for half of all dog deaths in-flight.

The airline acknowledged baggage handlers left Duke’s crate on the tarmac “longer than usual” due to an “unexpected delay” on a 100-degree day.

Cracking Down On Emotional Support Dogs On Planes

An ordinary adult pet Boxer is not allowed in an aircraft cabin, on account of size.

Only dogs small enough to fit in a carrier that fits under the seat in front of you can fly with their owners.

Airlines DO allow service dogs to accompany their owners in the cabin.

However, recent changes mean emotional support dogs are no longer allowed to accompany owners on flights and will now be treated the same as ordinary pet dogs.

Emotional Support Animals are those that help their own cope with daily life or situations that would otherwise be too distressing — essentially they’re a psychological safety blanket.

In early 2020 the US Department of Transportation sought public comment on proposed amendments to the regulation of service animals on flights.

Those changes were adopted in late 2020, after more than a year of lobbying from airlines.

They paved the way for airlines including American, Southwest and Alaska Airlines to essentially ban ESAs from planes.

There had been a flurry of unfavorable publicity around ESAs including one account of a pig causing a ruckus after boarding a flight as an Emotional Support Animal. Another owner reportedly tried to fly with a peacock as an ESA.

As a result, emotional support dogs are no longer allowed in the cabin.

That privilege is now restricted to service dogs specifically trained to perform tasks for people with disabilities.

Psychiatric service dogs, and service dogs assisting with disabilities including visual impairment, deafness, seizures or post-traumatic stress disorder are still permitted, but are required to have the same training as other service dogs.

Can Boxers Be Service Dogs?

The industry group Airlines for America had supported a tightening of the rules, saying:

“The increased availability of fraudulent ESA credentials has enabled people who are not truly in need of animal assistance to abuse the rules and evade airline policies regarding animals in the cabin.

“This has led to an increase in incidents by untrained animals threatening the health and safety of passengers, crew and passengers traveling with legitimate service animals.”

If you’re bringing a Boxer puppy home by plane, she’ll be small enough to ride in the cabin in a carrier at your feet.

There will generally be a fee for this.

Most airlines insist on a minimum age for puppies to fly.

Do not be tempted to sedate your pup for the trip.

The American Veterinary Medical Association strongly recommends against tranquilizing pets for travel because it increases the risk of injury or health problems.

Acepromazine: This Tranquilizer Can Kill Your Boxer

A checklist for flying in the cabin with a Boxer puppy should include:

Leaving her mother and littermates can be scary and stressful for a puppy, and the trip will be exhausting.

Make sure the house is prepared, so she can settle down quickly as soon as you finally arrive home.

If you are moving overseas, taking your Boxer with you is not as straightforward as you’d hope.

Make sure you check what the situation is at both your point of origin and your destination country.

There are companies that specialize in shipping pets internationally, so check with them for rules around Boxers and find out exactly how your dog will be transported.

The stress and risk to a dog of a long, unaccompanied journey by air is significant enough that rehoming with a relative, or cancelling the move, may warrant consideration.

Other Forms of Travel

It is risky to transport dogs in any way that requires you to be separated from your animal.

To take another Australian example, dogs have perished on the ferry that links Tasmania with the Australian mainland.

If you can’t drive instead of fly, your Boxer may well be better off at home with a pet sitter, ideally a trusted friend or family member your dog already knows.

Private Charter Flights For You And Your Boxer

If money is seriously no object (Sure!) .. it is possible to charter a private pet-friendly jet for you and your Boxer.

You’ll be in Lifestyles of the Rich and Famous territory .. but you and your pup will be together the whole time.

Your dog can have the run of the cabin, sleep on the seats, whatever.

According to PetTravel.com, the cost for a one-way private charter from New York to Los Angeles is $35 000.

From New York to London?

For the vast majority of Boxer owners, it’s best to forget flying and plan a cross-country drive with lots of breaks.

Even then, it’s a good idea to prepare your dog properly by taking shorter trips and getting him used to sleeping in the car.

You’ll want him to be able to stretch out across the back seat, in a car-safe harness like the , or inside a properly secured crate such as the