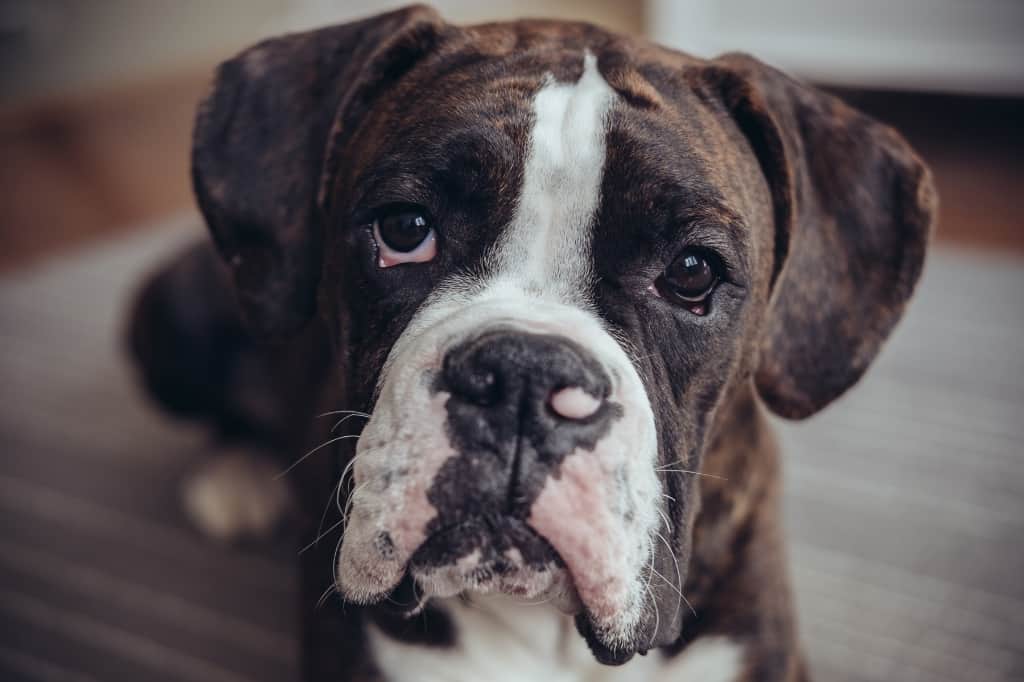 Your Boxer’s eyes should not be overly red and certainly not irritated.

There are several causes of red eyes in Boxers, ranging from foreign bodies and injuries to disorders like cherry eye and inward-turning eyelids.

Another, often overlooked, cause of eye inflammation and discharge is an underlying level of toxicity in the body as a result of poor quality food, exposure to chemicals in worming and flea products and use of drugs.

These unpigmented membranes can give the appearance of constantly red or pinkish eyes.

A Boxer can even have one pigmented haw and one unpigmented, like the brindle pup pictured above.

Notice how the pigmented haw in the puppy’s left eye is a browny-black color and virtually unnoticeable.

According to the official Boxer breed standard, third eyelids should preferably have pigmented rims that don’t draw attention to themselves.

Causes Of Eye Redness In Boxers

Let’s assume the redness in your Boxer’s eye is not due to an unpigmented haw.

The occasional red eye is quite common in dogs, as it is in humans.

Usually, it’s not serious and will resolve within a few days.

A variety of things can cause red eyes in your Boxer, including:

The most likely cause of redness in your Boxer’s eye is that one or other parts of the eye or eyelid are slightly irritated, inflamed or swollen.

Uveitis and conjunctivitis are medical terms for inflammation of different parts of the eye.

Uveitis refers to inflammation of the uvea, the middle layer of tissue of the eye wall.

Conjunctivitis, or pinkeye, affects the conjunctiva .. which is the thin clear tissue that covers the white of the eye and lines the inside of the eyelid.

This will normally be itchy.

A red, irritated eye may or may not be accompanied by eye discharge.

Though vets will be inclined to assume a red eye is “infected” and prescribe drugs, this kind of redness and discharge (as pictured in the Boxer further down in the article) is more accurately inflammation.

It will usually clear on its own within a few days to a week.

Fasting is a great first response, even while waiting for a vet appointment.

Chances are the redness will be gone before the appointment rolls around and you’ll be able to cancel it.

More on therapeutic fasting below.

The loose skin around a Boxer’s eye can allow dust, sand or grass seeds to enter.

Swelling and irritation are part of the body’s efforts to expel the debris.

You may want to flush out the eye and wash away further material with some pure, clean water … or even by spraying your dog’s face with the shower hose.

Grass seeds pose a considerable problem for dogs during summer.

Unremoved, seeds can scratch the cornea and even embed themselves to the point that they require surgical extraction.

Try to keep your dog’s face out of long grass.

Give him a good once-over to remove any seeds as soon as possible before they become lodged.

Your Boxer’s eyes can get red and irritated from simple everyday activities like swimming or sticking his head out the car window.

More problematic are household chemicals like cleaning sprays, air fresheners, carpet cleaners, fabric spritzers and even hair sprays, perfumes, incense and scented candles … all of which can cause a reaction in your dog when he inhales them.

These products are known for giving rise to a broad range of “allergy” like symptoms in Boxers including red eyes, itchy skin, chin acne and hives.

Keep a chemical-free home for your dog and consider investing in an air purifier.

If your Boxer’s eye seems sore as well as red, it could be an injury.

With their big, open eyes and inquisitive natures, it’s fairly easy for Boxers to get poked in the eye with a stick or scratched while playing with the cat.

If this is a possibility, have a good look at the eyes and move back the eyelids to see if you can spot any damage.

A minor abrasion will usually heal within a few days to a week.

If the laceration is more serious, it can form a corneal ulcer.

Symptoms of corneal ulcers include persistent:

According to VCA Hospitals, trauma is the most common cause of corneal ulcers in dogs.

Corneal ulcers can be caused by:

You will see a significantly raised, red lump of tissue in the inner corner of the eye that might appear to be “growing” across the eye.

This is a prolapse (collapse) of the gland associated with the third eyelid.

Cherry eye, or migrating membrane, normally happens in young dogs under the age of two.

The current treatment is surgery to reposition the gland into a pocket, stitching the conjunctiva together over the top.

Previously, vets would remove the membrane.

However, they discovered the third eyelid plays an important role in lubricating the eye and its absence can lead to severely dry eyes.

According to Animal Eye Care, one clinic which performs the cherry eye surgery, the success rate is very good — less than 2 per cent of dogs experience recurrence.

The clinic says if left untreated, the gland can enlarge, resulting in complications.

Sometimes a Boxer’s eyelids will have an abnormality that causes them to turn inward, allowing the eyelashes to rub against the cornea.

This often painful condition can be genetic in origin.

It may involve one or both eyes.

Entropion can cause corneal ulcers, blindness and even loss of the eye.

It can be corrected surgically.

If your Boxer’s eye is not injured and you’ve ruled out the more serious conditions, simple redness due to inflammation will usually resolve itself, without intervention, within a few days to. a week.

You can help this process along by fasting your Boxer for a day or two.

Therapeutic fasting is a safe, effective and side-effect-free first response to wide range of health problems.

In fact, dogs are evolutionarily adapted to fasting as a regular part of their routine.

Feeding dogs every day is a human invention.

Wolves and other wild dogs have always eaten more infrequently, closer to one to three times a week.

For owners uncomfortable with fasting their dogs, feeding fruit only for several days is another way to give the body a rest from constant meat digestion.

Fruit digests much more easily, and provides calories without the body having to expend much energy to extract them.

If your Boxer’s eyes are red, try a few days of fruit only meals to speed healing.

Fruit has the added benefit of having an extremely high water content.

This hydrating effect will help flush the lymph, helping the body to move out toxins that might be causing irritation of the eyes and other tissues.

An often overlooked cause of eye inflammation, and even eye discharge, is toxic accumulation.

If your Boxer is:

… he is likely carrying a considerable toxic load.

Most pet dogs are.

When the body is overburdened with toxins that can’t be excreted fast enough by the primary eliminative organs (gut and kidneys), the skin is often recruited to help.

In dogs the skin includes the paws, eyes and ears and symptoms of toxic overload commonly show up in all these places.

If your Boxer has recurrent, unexplained redness in the eyes, consider what you are putting into his body and what kind of home environment he’s living in and where he’s exercised.

Are you feeding fresh, raw, real food or highly processed kibble that contains preservatives and other extraneous ingredients?

Does your dog exercise on public parks and sports fields that are treated with herbicides?

Do you spray the couch with fabric freshener or burn scented candles?

The answers to these questions will provide clues as to how you can remove the cause of your pup’s eye irritation … and likely other low-level symptoms at the same time.

If you have recently improved your Boxer’s food or significantly reduced the toxic load on his body by coming off a course of medication, you may notice some eye irritation.

Why would improving things cause red eyes?

Eye redness and discharge is a common sign of detox.

The detox has been triggered by stopping the poor quality food or the drugs.

Just as detox in humans is triggered when they stop using drugs, or eating highly processed foods.

Relieved of the burden of improper feeding or constant assault of ongoing exposure to chemicals, your dog’s body can finally begin clearing long-stored toxic wastes.

This “cleaning house” can cause a temporary uptick in symptoms including red eyes, as those exiting toxins and acidic metabolic wastes irritate tissues on their way out of the body through the bladder, bowel, skin, eyes and even nose.

Detox is a case of things getting worse before they get better.

As long as you have stopped putting more toxins in, the backlog will eventually clear and the symptoms resolve.

How NOT To Fix Red Eyes In A Boxer

Don’t be tempted to respond to red eyes in your Boxer by administering:

A very common veterinary response to a red eye in a dog is to deem it an “infection” and prescribe medicated eye drops.

The standard eye drops dispensed by a vet include a three-way cocktail of antibiotics, antifungals and steroids.

This is because the vet doesn’t know what is causing the problem. It’s a three-way bet. And it exposes your dog to three different drugs, all of which are known to have significant effects on the body.

Your Boxer may also come away with anti-inflammatories and pain medication.

These options are always at your disposal later.

But they shouldn’t be a first resort, especially when you don’t have an accurate diagnosis.

While antibiotics and steroids are readily prescribed, holistic vets like Dr Karen Becker acknowledge they are the most abused drugs in veterinary medicine.

Each comes with an array of risks and side effects, some of which can be serious and long lasting.

All drugs inevitably add to the toxic load on your dog’s body.

They might temporarily suppress symptoms but they do nothing to address the underlying cause.

Instead of reaching for a quick fix, far better to tackle the problem at the source.

This means feeding a fresh, natural canine diet, cleaning up your dog’s environment to minimize toxic exposures, avoiding chemical wormers and flea products and giving the body time to heal.

This approach will see your dog clear the problem without the need for drugs.

More commonly though it’s a symptom of toxins accumulating in your dog’s system.

This can be due to poor quality diet like kibble, exposure to environmental toxins like lawncare chemicals and household cleaners or ingestion of chemical wormers, flea and tick preventatives and other drugs.

Fix those problems and the eye will clear, permanently.

How To Fix Tear Stains In Boxers (Permanently)