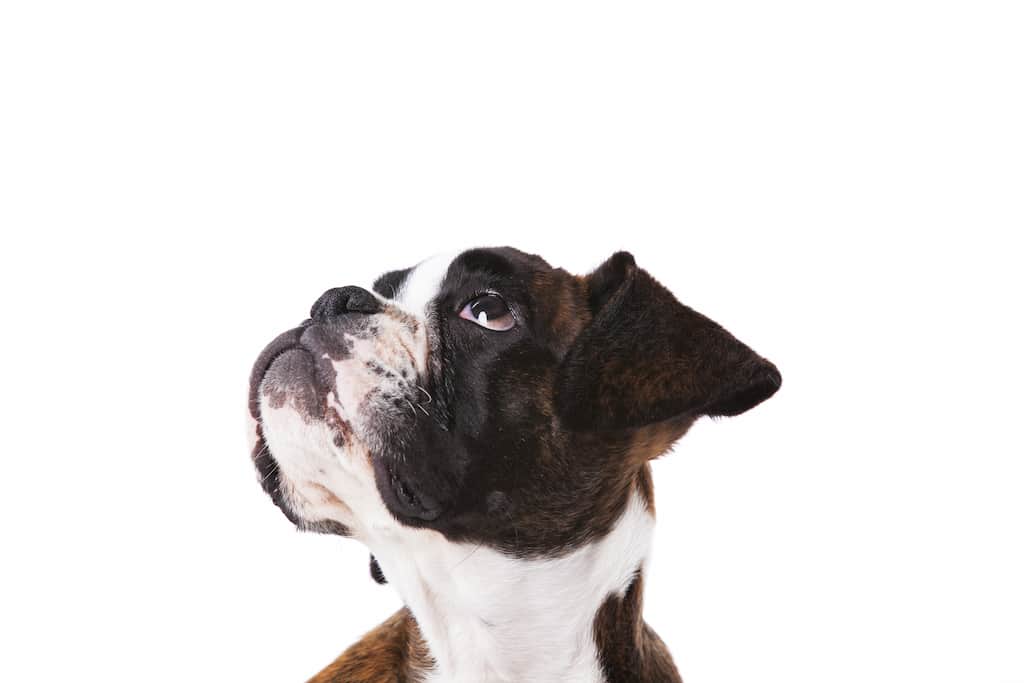 Reverse sneezing is a common but harmless respiratory event that sometimes affects Boxers.

Characterized by a spasm of snorting, reverse sneezing often causes alarm to owners who haven’t seen it before.

Reverse sneezing in Boxers can be triggered by irritants entering the nose and throat.

No treatment is necessary but there are a few things you can do to shorten an episode.

I am not a vet. This post is intended for general educational and informational purposes. I encourage readers to view my full disclaimer here.

What Is Reverse Sneezing In Boxers?

A reverse sneeze is just what it sounds like: the opposite of a normal sneeze.

Your Boxer will make a loud snorting or honking noise as she forcefully sucks in air through the nose.

The sound is sudden and startling.

Many owners mistake it for choking or fear their dog is struggling to breathe.

It can sound as though something is stuck in the airway or throat.

In medical speak, reverse sneezing is known by several terms including:

Usually the only symptom involved in reverse sneezing is the attack itself, with the Boxer behaving normally before and after.

As well as the honking noise, some dogs assume a strange stance with the front legs slightly splayed and the neck outstretched.

The eyes may appear to bulge.

An episode generally lasts anywhere from a few seconds to a minute or several.

What Causes A Boxer To Reverse Sneeze?

Reverse sneezing is due to a brief spasm of the throat muscles or soft palate, which is the rear portion of the roof of the mouth.

Any irritation to the nose, sinuses or back of throat can trigger an attack.

In rare instances, reverse sneezing-type symptoms may be due to:

How Common Is Reverse Sneezing In Boxers?

Reverse sneezing is fairly common in dogs, regardless of breed.

Most dogs have had at least one experience of reverse sneezing.

The predisposition of brachy breeds to reverse sneezing is because they have elongated soft palates.

This anatomical feature makes them prone to occasionally sucking their palate into their throat, which can trigger an episode.

Other breeds commonly affected in this way include Boston Terriers, Pugs, Bulldogs and Shih Tzus.

How Serious Is Reverse Sneezing In Boxers?

Reverse sneezing is nothing to panic about.

As long as your Boxer is otherwise acting normally, don’t worry.

However, if the reverse sneezing is more of a cough, this can be indicative of heart problems which do affect some Boxers.

For peace of mind, video an episode and show it to your vet.

Diagnosis Of Reverse Sneezing In Boxers

Your vet will generally suspect reverse sneezing on the basis of an owner’s description and confirm the diagnosis by viewing an episode.

Veterinary involvement is usually not necessary, unless you are concerned to rule out the more serious conditions like nasal masses and other abnormalities that can cause reverse sneezing.

In the rare instances where reverse sneezing is associated with underlying disease, it will generally be accompanied by other symptoms e.g. discharge, nose bleeds and noisy breathing in the case of nasal polyps.

How To Stop Reverse Sneezing In A Boxer Dog

If a reverse sneezing fit is prolonged, you can interrupt the behavior in one of several ways such as:

These techniques all work by causing your Boxer to swallow, clearing the irritant.

Intervention, though, is usually totally unnecessary and likely to introduce stress for your dog.

The main challenge for most owners is to remain calm and not overreact, as this can condition a panic response in the dog.

The most you really need to do is video the incident and pay attention to when your Boxer reverse sneezes including:

These details may help you identify the triggers, and avoid them in future.

If your Boxer’s reverse sneezing becomes more frequent or lasts longer (or is accompanied by other symptoms), consider a check up to rule out something like a foxtail or other foreign body in the respiratory tract.

You can help prevent reverse sneezing by regularly vacuuming to remove possible irritants from your Boxer’s environment.

How Not To Treat Your Boxer For Reverse Sneezing

Some owners overreact to reverse sneezing.

Perhaps interpreting a reverse sneeze as similar to hay fever in humans or assuming their Boxer has allergies, they medicate with the antihistamine Benadryl.

This is unnecessary, and potentially harmful, as Benadryl comes with its own risks and side effects.

Nor is reverse sneezing cause for an extensive battery of tests.

Unless your Boxer is showing other symptoms that suggest something more sinister may be going on, no action is necessary.

For the average Boxer, reverse sneezing is just be something that happens from time to time — much like regular sneezing.

The main thing to remember about reverse sneezing is that it worries the owner more than the dog.

The most intervention that’s likely required is to distract your Boxer in order to short circuit an episode.

As long as she is showing no other symptoms and acts normally on either side of an episode, it’s unlikely to be associated with anything more serious.

Henriques, Julia, Benadryl: Not As Safe For Dogs As You Think, Dogs Naturally Magazine, 2021