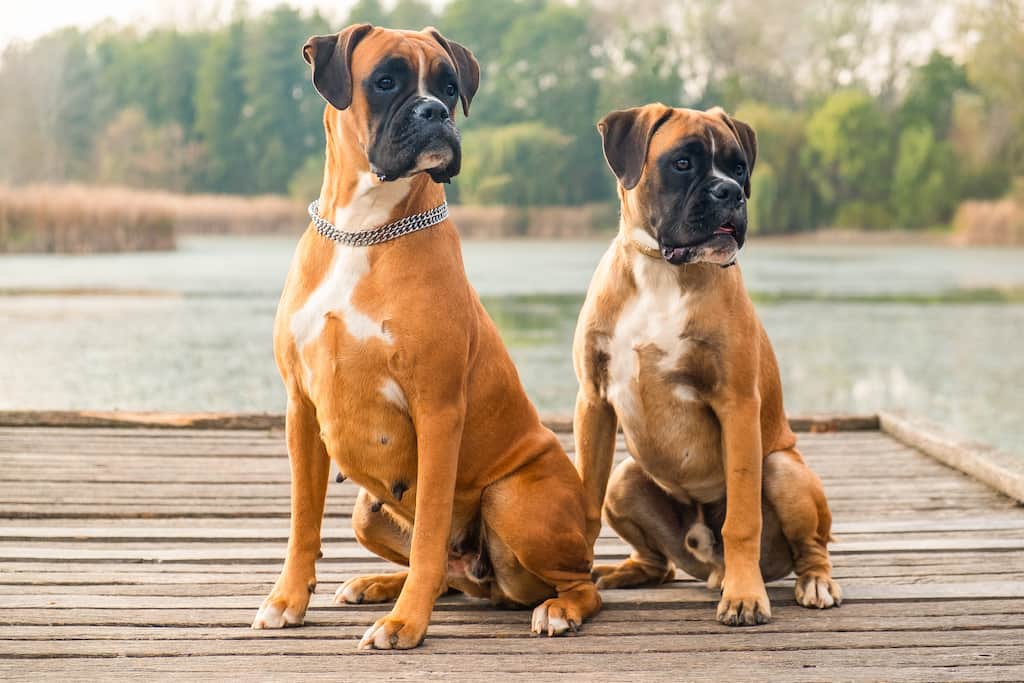 Boxers are classed as medium-sized dogs with lean, muscular builds.

The size and physique of a Boxer dog are influenced by factors including:

Boxers spayed or neutered before two years of age will be taller (and more prone to joint problems) due to artificially delayed closure of the bone plates.

Spayed/neutered Boxers are also more likely to be overweight or obese.

Boxers from European stock tend to be more solid than those with American bloodlines, but slightly shorter.

Raw-fed Boxers will generally be more slender than those eating kibble or other processed dog food.

I am not a vet. This article is intended for general informational and educational purposes. I encourage readers to see my full disclaimer. Boxer Dog Diaries is reader powered. I may receive a small commission, at no extra cost to you, if you make a purchase via links I share. Thank you for your support.

What Is The Average Size Of A Boxer Dog?

According to the breed standard as laid out by the American Boxer Club, Boxers should ideally be from 21.5 to 25 inches (54-63cm) tall.

This means Boxers are about the same height as Labrador Retrievers, or a touch taller.

Their high energy and larger-than-life personalities can mean they come across as bigger than they actually are.

This comes in handy if you ever have to lift your Boxer — an adult female of average strength can generally carry a Boxer a short distance.

A Boxer’s size will also help you when choosing clothes for your pup.

Best Clothes For Boxers: Our Picks In 2022

How Big Do Male Boxers Get Vs. Female Boxers?

A full size male Boxer stands 23 to 25 inches (58-63cm) tall at the withers (the highest point of the shoulder blades).

However, height is perhaps one of the least important things about a Boxer.

In the show ring, a Boxer will never be disqualified on the basis of what the measuring stick says.

Balanced proportions are what matters.

With their broad, deep chests tapering to narrow waists, Boxers can make other dogs seem shapeless by comparison.

A Boxer in peak condition is a sight to behold: their short, tight-fitting coats showcase a rippling musculature.

Boxer dog weights are even more flexible than heights.

The American standard makes no mention of what a Boxer should weigh.

In Europe, the ideal weight for a male is considered to be more than 66 pounds (30kg).

Females are supposed to weigh at least 55 pounds (25kg).

How To Tell If Your Boxer Is The Right Weight

How Big Do Boxers Get Full Grown?

Even after your Boxer has reached his adult height and stopped growing upwards, he will continue to “fill out” as he matures.

Boxers are known to go through a “skinny phase”, not attaining their final body mass and bulk until the age of three or so.

Many owners worry their Boxers are too thin and try to fatten them up, but this is usually completely unnecessary.

You don’t need a set of scales to judge whether your Boxer is a healthy weight.

From the side, the curve of the ribcage should tuck to the waist with a hint of the last few ribs visible when the dog stretches and moves.

From above, there should be a definite waistline — if your Boxer is a barrel from front to back, he is probably overweight (as are most pet dogs in the United States).

Most Pet Dogs Are Fat. Is Your Boxer One Of Them?

On the other end of the spectrum, if you can see your Boxer’s hips, vertebrae or the full rib cage, he is likely too skinny.

Supplementing the diet with fresh, raw eggs and giving more raw meaty bones are among the healthy ways to help an underweight Boxer bulk up.

How To Put Weight On A Skinny Boxer

We already know male Boxers are being bigger boned than females.

Next to gender, another determinant of a Boxer’s size and stature is the dog’s genetic heritage, particularly whether his bloodlines are American or European.

The Boxer comes from Germany, where it evolved as a working dog originally used to hunt bear and wild pigs.

Because of this role as a big game hunting dog, the most sought-after qualities in a European Boxer have traditionally been power and muscle.

Compare this to the breed’s history in United States where Boxers have largely been companion animals.

As a result, American breeders have tended to be more concerned with appearance, turning out Boxers that are sleek and elegant, but less substantial i.e. taller but not as muscled, with lower body weights.

These days, a Boxer’s geographic location isn’t a reliable indicator of whether he has American or European bloodlines.

There are plenty of European Boxers in the USA and vice versa.

There is increasing cachet associated with “Euro” Boxers and more American owners are seeking them out in the belief that European bloodlines may produce Boxers that are not only physically superior, but easier to train and perhaps healthier.

What Is The Difference Between European & American Boxers?

How Neutering Distorts A Boxer’s Size

Neutering or spaying removes a dog’s hormone-producing sex organs — the ovaries in the case of females and the testes for males.

While the intent is to remove the capacity to reproduce, the effect on the body is much more far reaching.

Neutering is known to increase the incidence of many diseases that are non-existent or significantly less common in intact dogs.

These diseases include several conditions that Boxers are already prone to such as mast cell tumors.

Another effect of neutering/spaying is to artificially prolong a puppy’s growth phase, by delaying the closure of the growth plates in the bones.

As a result, Boxers that are neutered when they’re young end up being unnaturally tall.

A bit of extra height might seem harmless, or even desirable, but this abnormal bone growth throws out the proportions of the body, predisposing a Boxer to arthritis.

From a health perspective, the preponderance of current scientific evidence strongly suggests it is better for a Boxer to remain intact for life — or at least until growth and development is complete.

This means that a Boxer should not be spayed or neutered before two years of age, at the youngest.

Getting a Boxer “fixed” is regarded as responsible dog ownership in countries like the United States but this is a view not shared in many parts of Europe.

How Neutering Affects Your Boxer’s Body

But female Boxers only go into heat once or twice a year and, with a little knowledge and planning, you can successfully navigate these times.

Does Nutrition Affect How Big A Boxer Dog Gets?

A Boxer’s size is a function of both the underlying skeletal structure, finalized by the time a Boxer reaches adulthood, and the body composition (how much muscle and fat) which remains fluid, depending on a dog’s lifestyle and feeding.

While setbacks like being the “runt” of the litter generally even out by adulthood, the care and nutrition a dog receives — particularly during the early developmental years — impacts all aspects of a Boxer’s health and wellbeing.

In puppyhood, it’s critically important to feed a Boxer a raw meaty bone-based diet rather than highly processed kibble, and to avoid overfeeding, which can cause overly rapid growth.

Australian vet and raw feeding pioneer Dr Ian Billinghurst, who wrote Give Your Dog A Bone, recommends always “holding back” a pup’s growth by erring on the side of slight underfeeding.

This mirrors what occurs in nature, where there is rarely an oversupply of nutrition and dogs, including pups, are much leaner than we’ve come to see as normal in the pet dog population.

When a Boxer pup grows too fast, it can increase the likelihood of developmental disorders like knuckling, in which a pup becomes bow-legged, seemingly overnight.

(Hard surfaces like concrete, tiles or floorboards are another major factor involved in this condition, which can be rectified and normal growth restored.)

Throughout a Boxer’s life, proper nutrition through the feeding of a fresh, natural canine diet will prevent obesity and keep a Boxer at the right size, whatever that means for the individual dog.

How To Raw Feed A Boxer

Boxers fed kibble are more predisposed to be overweight, because of the high fat content of these commercially manufactured products compared to the lean meats dogs evolved eating.

Appropriate exercise during each life stage is also key in burning fat and building and maintaining muscle.

What About Mini Boxers?

So called “miniature Boxers” are actually a mixed breed, resulting from mating a Boxer with a smaller dog, frequently a Boston Terrier.

The hybrid is a dog that resembles a Boxer, but with a much shorter stature and other differences.

Boxer dogs are a mid-sized dog with a shapely figure.

Even within the one litter, each dog is an individual and there can be considerable variation in a Boxer dog’s size.

In general, a Boxer will be larger if he is:

Bloodlines and gender are set in stone, but you can help your Boxer attain his healthiest weight and height by keeping him intact (or at least delaying neutering until growth is complete) and by feeding a fresh, raw meaty bone-based diet.

Regardless of your Boxer dog’s size, you can be sure he will still consider himself a lap dog, clambering on top of you whenever possible.