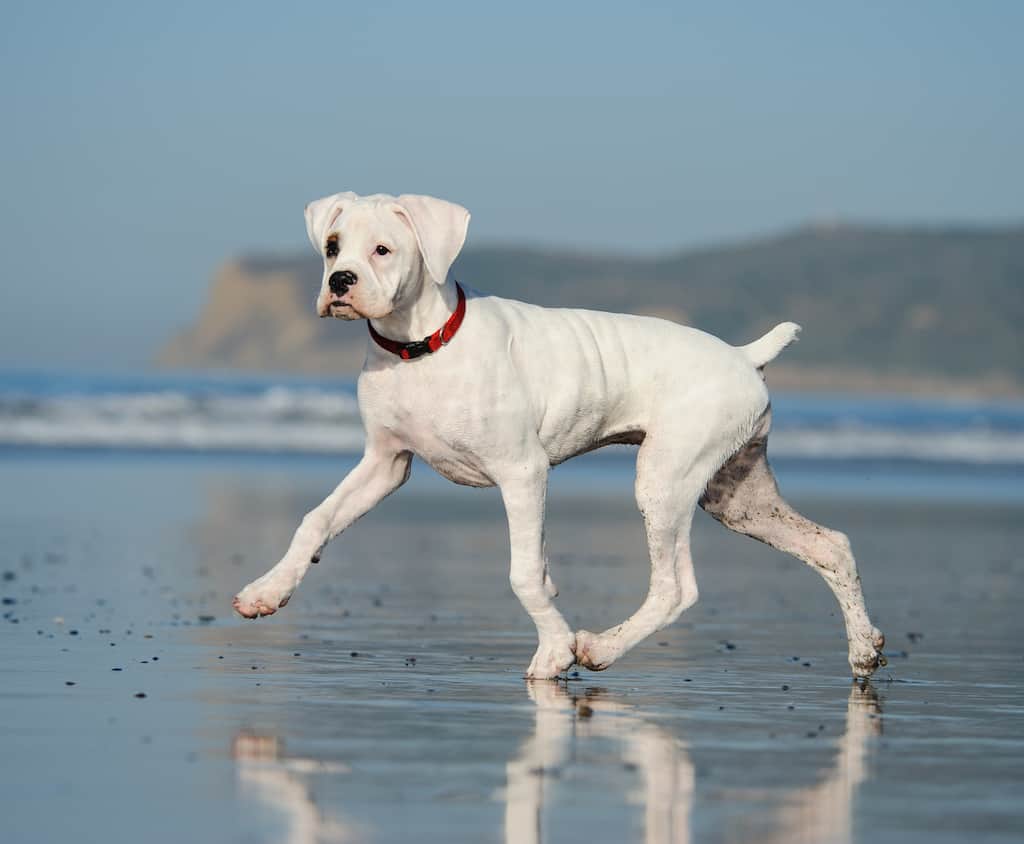 The docking of Boxers’ tails is a hangover from when their ancestors were used as hunting dogs, used to hold down large, fierce prey.

Historically, Boxers’ tails were docked to protect from injury. It was thought that a short tail would be harder for beasts like wild boar and bears to grab.

Docked tails are enshrined in the American breed standard for Boxers. Consequently, Boxers with natural tails are supposed to be “severely penalized” in the show ring.

Only two states, Maryland and Pennsylvania, have any restrictions limiting the circumstances in which docking can be done.

I am not a vet. This post is for general informational and educational purposes only. See full disclaimer here.

Among the reasons given throughout the ages for docking the Boxer’s tail are:

Some of these ideas are laughable in retrospect.

Others are still put forward today.

A review of medically unnecessary surgeries in dogs and cats at the University of British Columbia in 2016 found there’s very little evidence suggesting any of the justifications for tail docking are valid.

“Wait, Do Boxer Dogs Have Tails?”

Tail docking (and ear cropping) is so much the norm in breeds like the Boxer that many people struggle to recognize dogs when they have intact tails and ears.

And they are often unaware that the characteristic look of certain dogs is the result of surgical procedures.

A second study done at the University of British Columbia in 2016 tested this.

Researchers showed people a series of photos of dogs in their natural state and surgically modified.

They found almost half of participants (42 per cent) thought the tail-less, pointy-eared dogs were just born that way.

The researchers noted that assessing public attitudes on tail docking and ear cropping might be difficult, given so many people are unaware the practice takes place.

Many of these same traits have been shown to predict both adoptability and relinquishment of dogs.

The same went for Doberman Pinschers, Miniature Schnauzers and the Brussels Griffon, other breeds commonly altered by cutting ears and tails.

Is It Legal To Dock A Dog’s Tail Overseas?

Removing Boxers’ tails assumes the tail is an unnecessary appendage that can be amputated without any adverse effects on the dog.

There is growing awareness to the contrary, and a movement away from tail docking.

The practice is illegal in many European countries including Sweden and Germany, the Boxer’s birthplace.

What Is The Difference Between American & European Boxers?

Since 2004 tail docking has been banned in Australia where long tailed, floppy eared Boxers are the norm.

In the UK only a veterinary surgeon can dock a dog’s tail, not breeders.

Knowledge is power. Dig deeper into the most important aspects of your Boxer’s care with our weekly tips and Boxer-specific advice.

Are There Health Reasons To Dock A Boxer’s Tail?

Preventing injury to the tail is frequently put forward as a reason for docking the tail of a Boxer.

Boxers owners do sometimes report their dogs hurt their tails by whacking them on coffee tables or walls.

Crated and kennelled dogs have been found to be more likely to injure their tails.

There is even a term for it.

“Happy tail” is the name given to it when short-coated dogs with exuberant temperaments repeatedly injure their tails when they strike some part of their built-up environment.

How Likely Is A Boxer To Injure A Long Tail?

The likelihood of tail injury depends largely on whether your Boxer is a working dog or a pet.

This study of tail injuries in spaniels and retrievers in Scotland in 2014 found 13.5 per cent of the dogs suffered a tail injury during the hunting season.

The researchers calculated that to prevent one tail injury per season, 2-18 spaniels would need to have their tails docked as puppies.

However, the largest study on tail injuries in pet dogs, done in the United Kingdom in 2010, found the incidence of tail injury in a pet dog was less than a quarter of one per cent.

At that rate, the cost-benefit analysis looks a little different: 500 pet dogs would have to have their tails cut off to prevent a single tail injury.

How Do They Dock A Boxer’s Tail?

There are two main ways of docking Boxer tails.

Does It Hurt When They Remove A Boxer’s Tail?

There is disagreement on this.

Yes, according to the American Veterinary Medical Association.

It points out that docking a puppy’s tail involves cutting through muscle, bone, tendon, cartilage and seven pairs of highly sensitive nerves.

The AMVA says, “Puppies give repeated intense shrieking vocalisations the moment the tail is cut off and during stitching of the wound, indicating they experience substantial pain.”

The AVMA wants tail docking removed from the Boxer breed standard as it has been in other countries.

Gentry Boxers’ Paula Vandervoort, who is a natural rearing breeder, has docked Boxer tails using a variety of methods.

She is in no doubt the cutting method does hurt.

“For decades, I docked tails using a tail docker and sutures.  It was messy and the puppies screamed.  There was no way I could do this in the presence (or earshot) of the dam.”

Others maintain the practice is painless as long as it’s done when the pups are just a few days old.

According to this study, puppies cannot consciously experience pain for at least the first week of life because the canine nervous system is insufficiently developed.

The study says puppies are “unconscious” for the first two weeks outside the womb.

Dogs, the study says, differ from human infants in this regard, and from calves, lambs and piglets which it says are neurologically mature as newborns.

The same study does recommend against tail docking — but not because it’s a painful procedure.

Instead, the researchers point to the long term effect of tail docking on a dog’s wellbeing.

There is evidence to suggest that painful procedures conducted in the neonatal period, when the nervous system is vulnerable, can lead to chronic pain and heightened sensitivity to pain later in life.

This damage can occur regardless of whether a puppy consciously experiences pain at the time of the procedure, and can permanently affect how the animal processes and perceives pain, lifelong.

Research suggests tail docking within 7 days of birth is likely to cause:

In some dogs tail docking can also interfere with tail-related functions including:

In female, large breed dogs tail docking has also been linked to:

How To Raw Feed Your Boxer — 7 Day FREE eCourse

Beyond the physical problems that some Boxers with docked tails can face, there are social consequences to not having a tail when you belong to a species that uses tails as a crucial means of communication.

Boxer owners might think their “wiggle butts” are perfectly able to express themselves without a long tail.

But the nuances of canine communication operate on a level beneath human awareness.

For instance, a tail that wags more to the right indicates a positive stimulus (like seeing an owner) with likely approach tendencies.

A tail wagging more to the left signals a negative stimulus (like seeing an unfamiliar, dominant and potentially threatening dog), with likely withdrawal to follow.

Studies like this one have found dogs not only express themselves in this intricate way, but are constantly reading and responding to the subtle cues expressed by the behaviour of other dogs.

For instance, a dog that observes another dog wagging his tail more to the left (the response to negative stimulus, indicating likely withdrawal) will display an elevated heart rate and increased anxiety behaviors — a different emotional response than when the same dog is exposed to a dog wagging more to the right.

Not surprisingly given the level of complexity at play, dogs with docked tails suffer an impaired ability to effectively communicate with other dogs.

Importantly, without a tail they are less able to head off conflict by sending clear body language to other dogs.

A wagging tail is a universally understood indicator of friendliness in dogs, the equivalent of a human smile.

But, just like with smiles, there are many ways to wag a tail, all saying something slightly different.

There is a Boxer that’s been bred to be short-tailed.

The bobtail Boxer was first created in the early nineties by British geneticist Dr Bruce Cattanach who mated a Boxer with a Pembroke Welsh Corgi.

A bobtail can be distinguished from a docked tail by feeling it.

A bobtail will have a natural tapering to smaller bones, whereas a docked tail will be the same size all the way along. Bobtailed dogs will also have documents.

There is a DNA test that can determine whether the bobtail gene is present or if the tail has been docked.

The gene responsible for the bobtail doesn’t “breed true” though so there are still some long tailed puppies in each litter.

When Boxer Met Corgi: How The Bobtail Boxer Was Born

This procedure involves cutting out a portion of the ear to make it stand erect.

Historically owners gave similar reasons as for tail docking: to prevent injury of the ear and to stop the animal being caught by the ears.

According to the American Kennel Club, cropped ears “help enhance the Boxer’s hearing”.

Many countries ban ear cropping under prevention of cruelty to animals legislation.

Ear Cropping In Boxer Dogs
History Of The Boxer

The evidence suggests removal of a Boxer’s tail has consequences for a dog’s physical and social functioning.

To quote the AVMA, “The only benefit that appears to be derived from cosmetic tail docking of dogs is the owner’s impression of a pleasing appearance.”

“In the opinion of the AVMA, this is insufficient justification for performing a surgical procedure.”

“Today, cropping and docking serve no functional purpose. Instead, these cosmetic surgeries are simply — surgical alteration to make the dogs fit our preconceived notions about what is the “right” look for the breed.”

“But the right look is only a matter of fashion — short-lived and changing.”

Suffice to say, opinions on tail docking are in flux.

Not all breeders agree with it.

Talk to yours before the litter arrives and they may well be more than happy to leave your dog’s tail the way nature intended.

Why Does My White Boxer Have Black Spots?