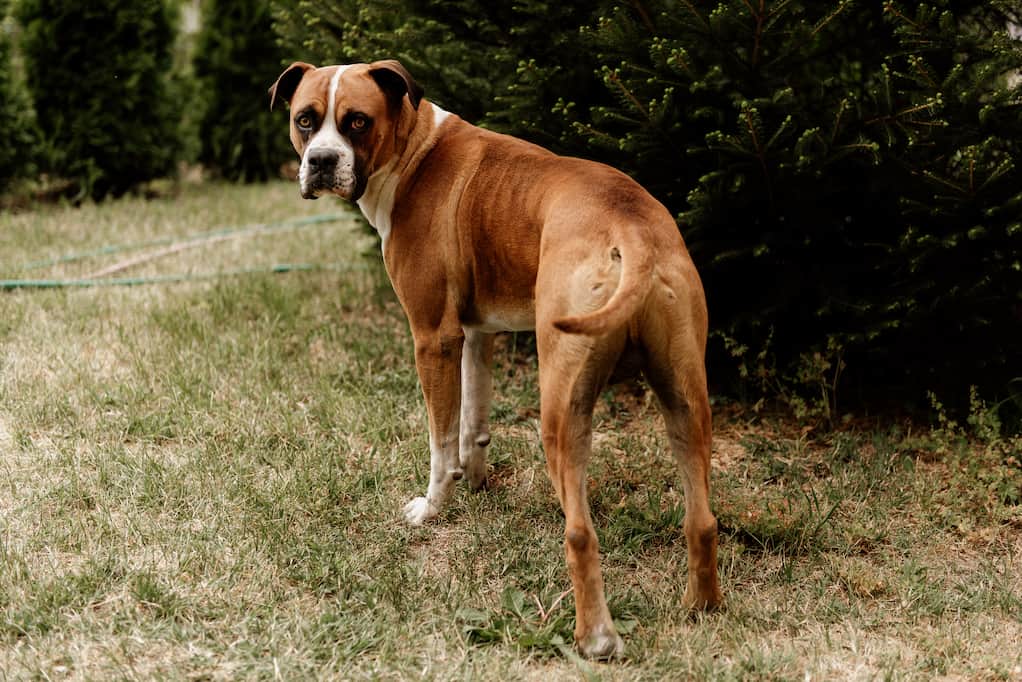 More than one Boxer owner has had their dog wag her tail and hit something with such force that it sprays the wall with blood.

“Happy tail” is a type of tail injury that can affect Boxers with long, natural tails — resulting in a splitting of the skin that can be tricky to heal.

Fortunately, there are simple ways to prevent this happening, and to repair an injured tail.

I am not a vet. This post is intended for general informational and educational purposes only. I encourage readers to see my full disclaimer. Boxer Dog Diaries is reader powered. I may receive a small commission, at no extra cost to you, if you make a purchase via links I share. Thank you for your support.

Your Boxer’s tail is an extension of her spine, albeit more mobile and flexible.

The average canine tail consists of between five and 20 bones, known as caudal vertebrae.

Palpate your Boxer’s tail gently and you’ll be able to feel these bones, which get progressively smaller from the base of the tail to the tip.

In between each vertebra is a small joint.

This bony structure has a good blood supply, as well as muscles and nerves.

All of these tissues are encased in a relatively thin layer of skin and — in Boxers — a covering of short, smooth hair that offers little protection compared to the thick coats of other breeds.

While tail injuries like “happy tail” are by no means exclusive to Boxers, they are more common in large dogs with powerful tails that get enthusiastically wagged.

No dog fits this description better than a Boxer, but happy tail can just as easily happen to whippets, labs other mostly short-coated breeds.

The key risk factor seems to be an exuberant personality that results in lots of tail wagging in confined spaces.

If a Boxer’s tail is repeatedly hit against hard surfaces, it will split.

If this continues to happen on a regular basis, the wound won’t have a chance to heal.

Prevention of tail injuries like happy tail is about commonsense management of your dog.

Your Boxer is always going to wag her tail — but wagging it vigorously in confined spaces is the issue.

Once you’re aware injuries can occur in this way, happy tail can be easier to avoid than you might think.

It’s often as simple as keeping your Boxer away from walls (especially corners), doorways, bookcases, coffee tables and any other furniture or hard objects at tail height — particularly when you know she’s likely to be excited.

Typical high risk occasions for tail injury are when you arrive home from work or when guests first enter the house.

Don’t let your dog and guests congregate in narrow entrance hallways or foyers.

Move swiftly to more spacious areas where your dog’s tail won’t strike things when she wags it.

Minimalism goes a long way when you live with a Boxer.

Consider decluttering your living space if that’s a contributing factor.

How To Live In An Apartment With A Boxer

It can help to teach your Boxer to behave calmly indoors.

Now is a good time to train your Boxer to greet people in a low key, controlled way — without jumping up or going berserk.

This can take time and lots of practice.

How To Stop A Boxer Jumping On People

A “Go to your bed” command can help keep a lid on excitement levels and give your dog an alternate, incompatible behavior to concentrate on.

Save the high energy play for outside where there’s more space and less chance your pup will hurt herself.

My Boxer Hurt Her Tail. What Should I Do?

If your Boxer has already injured her tail, the challenge will be preventing repeated trauma so that the wound has time to heal.

There are a few steps you can take that will speed your dog’s recovery:

Plastic hair curlers can be used to protect the damaged section of tail from further impact. Just make sure you don’t use anything that could prove hazardous to your dog if she manages to remove it. Consider whether any kind of cone or neck cushion like the BENCMATE Protective Inflatable Collar is needed to stop her interfering with the dressing.

How Fasting Benefits Your Boxer

Tail problems run the gamut from minor injuries that will resolve themselves to severe damage needing veterinary intervention.

Cuts and scrapes will happen from time to time and generally require nothing more than a rinse with cool running water to remove any dirt.

If the injury is self inflicted and your dog is gnawing at his tail, take care to identify why and address it. Rule out fleas.

Does Your Boxer Have Fleas?

If a lot of skin is missing or the bleeding won’t stop, the wound may require stitches.

Fractures are most often associated with the tail being shut in a door or stepped on, but can happen during a fall off a couch or bed.

How serious an injury is often depends on where on the tail it occurs.

Simple fractures at the tail tip can often heal relatively easily, leaving nothing more than a kink in the tail that remains sensitive.

Injuries closer to the base of the tail can be more serious and may involve nerve damage.

Tall pulling injuries can cause what’s called an “avulsion” injury.

These injuries may even damage nerves higher up in the spinal cord, leading to incontinence or difficulty urinating and defecating.

“Limber tail syndrome” is not to be confused with happy tail.

This is a painful but temporary condition that’s relatively common in sporting breeds like retrievers.

The tail hangs limply, usually starting right at the base or slightly along the tail, and can look as though it’s broken.

However, limber tail is actually a muscular issue, caused by overuse.

Onset is very sudden, often after a swimming or hunting session or other intense period of outdoor activity where the dog is using her tail a lot.

With rest, limber tail usually resolves on its own after about a week.

If the limpness persists, it may indicated something more serious like spinal cord injury.

Should I Dock My Boxer’s Tail To Prevent Injury?

Despite what is sometimes said, tail injury from wagging is not the reason why Boxer tails are commonly docked shortly after birth.

Like ear cropping, tail docking is done largely to conform with breed standards — in other words, it’s purely an aesthetic preference.

Tail Docking In Boxers
Why Do They Crop Boxers’ Ears?

While you may have cosmetic reasons for wanting a Boxer with a docked tail, your dog uses her natural length tail to preform several important functions including:

Dogs use their tails to signal to other dogs and to avoid conflict.

Dogs with docked tails may have more difficulty communicating if other dogs find them harder to read, especially at a distance.

During motion, particularly at speed, the tail functions as a rudder, helping the dog make turns and safely maneuver.

Remember, dogs have each of their body parts by evolutionary design.

Dewclaw removal, for instance, was once considered harmless, but it’s now understood to predispose a dog to injuries and arthritis.

Dewclaw Removal: Is It Harmless?

As detailed above, there are other effective ways to prevent tail injury in Boxers, without resorting to amputation of a body part.

The tail is part of the spinal column, not an isolated appendage that can be removed without affecting the whole.

Signs Your Boxer Has Hurt Her Tail

Tail injuries are usually pretty obvious — you’ll notice if your Boxer isn’t using her tail the way she usually does.

Telltale signs of an injured tail include:

What Can I Give My Boxer For Pain?

In extreme cases the tip, or more, of Boxer’s tail may need to be amputated if it is severely and irreparably damaged.

Given everything your dog uses her tail for, make sure this is only done as a last resort.

Amputating an adult dog’s tail is a much more complicated procedure than tail docking in puppies and can involve a considerable healing period.

Always make sure your vet is not going to use the tranquilizer acepromazine as part of your Boxer’s anesthetic protocol.

Acepromazine: The Common Drug Your Boxer Must Never Have

The key to protecting your Boxer’s long, natural tail is not putting her in situations where she is likely to thrash it against wall corners or other indoor surfaces.

You can’t wrap your Boxer in cottonwool, but you can manage behavior and excitement levels.

If your Boxer has injured her tail in this way, be sure to avoid any more physical trauma to the wound, so it can heal.

You may need to wrap the wound and cushion it with something like a hair roller.