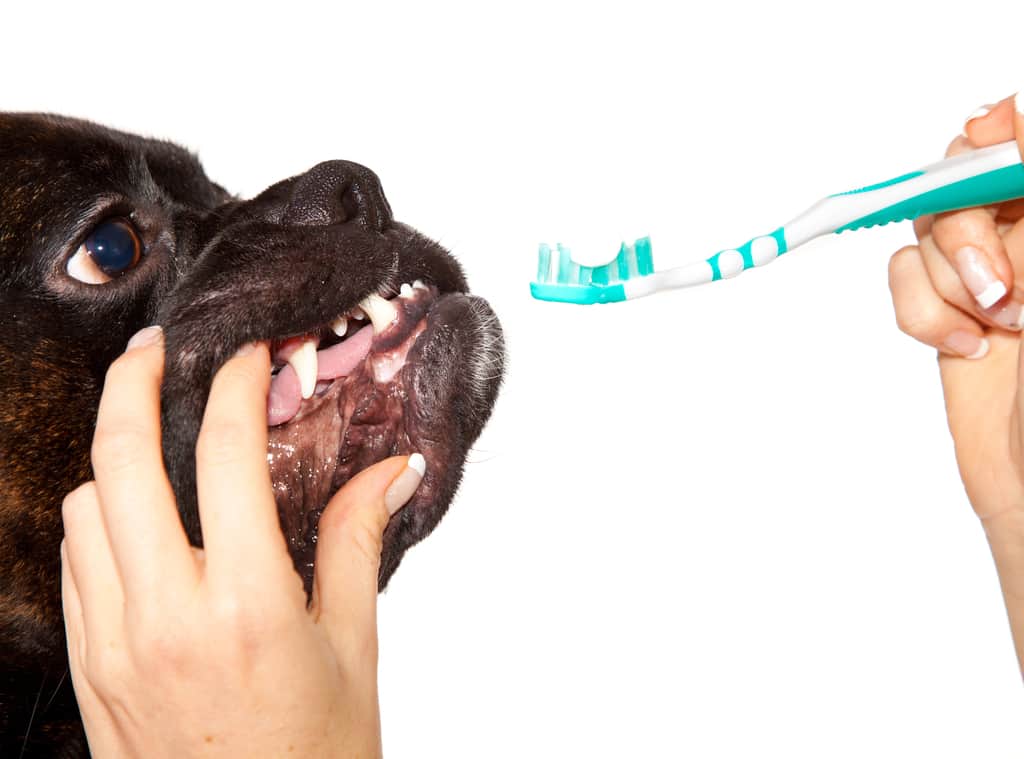 The most effective way to keep your Boxer’s teeth in good condition is to feed plenty of raw meaty bones.

An uptick in dental disease in modern pet dogs followed the widespread adoption of kibble feeding in place of a dog’s natural diet.

While dentistry now provides a lucrative revenue stream for vets, teeth cleaning under anesthetic is unnecessary in properly fed dogs .. where raw meaty bones serve this teeth cleaning function every time your dog eats his dinner.

There are several studies that demonstrate the effectiveness of raw meaty bones at both preventing and removing tartar.

What Is Periodontal Disease?

Periodontal disease refers to inflammation and infection of the gums, bone and tissue surrounding the teeth.

It is caused by the accumulation of plaque, a sticky film that forms on the teeth as a result of food and fluids combining with saliva.

The bacteria in plaque is blamed for producing acids which can cause early stage gum disease, or gum inflammation, known as gingivitis.

If the plaque is not removed by crunching on raw meaty bones .. it mineralizes over time into a hard, yellow or brown deposit called tartar, or calculus, which forms a barnacle-like crust on the teeth.

An accumulation of calculus, and gingivitis, can progress to periodontitis, which is a broader inflammation of the structures that support the teeth.

In the longer term, this can erode the roots of the teeth, causing bone loss and potentially loss of teeth.

Why Do So Many Dogs Have Bad Teeth?

Dental disease is said to be the most common health problem in dogs.

According to the textbook Veterinary Dentistry Principles and Practice, 80 per cent of dogs have some degree of periodontal disease by age 2 — although other studies suggest that overestimates the scale of the problem.

But what else do these dogs have in common?

They are fed on kibble or some other kind of highly processed commercial dog food which typically contains a lot of refined carbohydrate.

In other words, they are not eating a natural, raw meaty bone-based diet.

In his book Give Your Dog a Bone, Australian vet Dr Ian Billinghurst links the rise of dental disease, and the emergence of the specialty of veterinary dentistry, to the widespread adoption of kibble feeding.

In 2015 Dr Lonsdale did an experiment with four of his patients.

Previously raw fed, all of the dogs started the study with pristine teeth and gums and fresh breath.

You can see pictures of the before and afters in this video.

After those 17 days, all of the dogs’ teeth had dramatically deteriorated.

They were yellow, their breath smelled foul and their gums were sore and, in some cases, bleeding.

This happened in less than 3 weeks.

Imagine the state of a dog’s teeth after a lifetime of eating kibble.

As for kibble maker’s claims that dry dog food somehow cleans the teeth because it’s crunchy?

Can you imagine your dentist telling you that eating tortilla chips cleans your teeth?

These procedures are highly profitable for vets, costing anywhere from $300 to $1000, without extractions. The cost is even higher if done by a specialist.

DNM quotes vet Dr Michael Fox, who is a former vice president of The Humane Society of the United States and author of more than 40 books on animal care.

Dr Fox says, “Cleaning teeth on a regular basis under general anesthesia is a high-risk money-maker that can mean death for otherwise healthy animals.”

Every anesthetic your dog undergoes carries risk and that risk is higher for brachycephalic breeds like the Boxer.

See also: Acepromazine: Why Your Boxer Must Never Have This Drug During Anesthetic

There is another, risk free, way to attend to your dog’s oral health.

A raw meaty bone, with its crevices, sinews and ligaments is the canine equivalent of a toothbrush and dental floss in one.

Raw meat also contains an array of natural enzymes not present in cooked food, which work to prevent tartar build-up.

Generations of raw feeders can attest to the gleaming white teeth and fresh breath their dogs enjoy.

But you don’t have to take their word for it.

In 2016, Brazilian researchers studied the effect of raw bones on the teeth of 3-year-old Beagles.

They found dogs that chewed raw beef bones experienced a 70 per cent reduction in calculus after 12 days.

Your dog will consume a lamb neck almost entirely.

Avoid weight-bearing bones like marrow bones as they are too dense and more likely to crack teeth.

Chicken bones are very soft and chicken frames (carcasses with most of the meat removed) or chicken backs make perfect 100 per cent edible bones for dogs the size of Boxers and should be included with every meat meal.

Should I Give My Boxer Dental Chews Or Rawhide?

All sorts of products are sold to owners on the premise that they promote dental health.

But the range of available products reads like a list of how NOT to care for your Boxer’s health.

Never give your Boxer:

Dental chews are highly processed and contain filler ingredients that are biologically inappropriate for dogs.

Rawhide is a by-product of the leather industry and full of chemicals. It is also highly indigestible and can cause intestinal blockages.

Mouthwashes and water additives are synthetic concoctions that contain ingredients which have no place in a dog’s body. Do not fall for these gimmicks.

Made-for-dogs toothpaste is designed to be digestible. All the same, it contains a range of ingredients that are entirely unnatural for a dog to consume.

The antiseptic chlorhexidine has antibacterial, antifungal and antiviral properties and is promoted as preventing plaque and gingivitis with daily application.

Your dog will swallow the liquid and repeated use can cause irritation to the gastrointestinal tract.

As for rubber or plasticised toys and “nylabones”.. this is a poor substitute for what your dog really wants to be chewing on.

You don’t need to have your dog ingest chemicals in order to maintain his dental health.

Caring For Your Boxer Puppy’s Teeth

Boxers have been bred to have an undershot bite, which means the lower jaw juts out further than the upper jaw.

However, they have the same number and type of teeth as all dogs.

Boxer puppies are born without teeth, but they erupt through the gums, 28 in total, from 3 to 6 weeks of age.

When a dog is about 5 months old (but anywhere from 4 to 8 months), a second round of teething sees these baby teeth fall out, replaced by the permanent, adult teeth.

An adult Boxer has a set of 42 teeth including:

During teething a dog has a physical need to chew.

Chewing on raw meaty bones from the point of weaning onwards helps the teeth erupt and relieves discomfort. It will also save the leg of your sofa or your best pair of shoes .. and deliver a world of nutritional benefits.

Do Boxers Have Bad Teeth?

There is no reason Boxers should have any more dental problems than other dogs.

However there is one condition that is seen most commonly in Boxer dogs, called gingival hyperplasia.

Gingival hyperplasia, or gum overgrowth, is a condition where the gum tissue grows to cover the teeth.

It looks like a firm swelling of the gums, affecting most of the mouth and can make the teeth hard to see.

In some cases the swelling is more localized and can be mistaken for a tumor.

In humans, it is often a sign of poor oral hygiene.

In both dogs and people it can be caused by medications including:

Discontinuing the drugs fixes the condition.

Vets sometimes recommend an operation called gingivoplasty, to cut back the gums.

This is a procedure that requires general anesthetic.

It is not curative and does nothing to address the cause of the problem. The gums often grow back, resulting in repeated surgeries.

In human medicine, surgery is only recommended in the most severe cases. The usual recommendation is that gingival hyperplasia can be resolved by improving oral hygiene.

While this condition is most often seen in Boxers, other predisposed breeds include Bulldogs and sometimes Cocker Spaniels.

While it’s not necessary to brush your Boxer’s teeth if you’re feeding him right, it is a good idea to get him used to having his mouth examined.

Start when your dog is a puppy. Get him used to you opening his jaw and putting your fingers in his mouth, feeling his gums and teeth.

This allows you to keep an eye on what’s going on in your Boxer’s mouth and to know what’s normal.

It also makes for a less stressful experience for your dog if there’s ever a problem that needs to be looked at by a vet.

It works for wolves and other wild canines and it will work for your Boxer.

Try it and see the transformation in your dog’s mouth.

Veterinary Dentistry, Principles and Practice, Robert B Wiggs and Heidi B Lobprise, Wiley-Blackwell, 1997

Give Your Dog a Bone, Dr Ian Billinghurst, 1993

The Disturbing Cause of Dental Disease In Dogs, Dana Scott, Dogs Naturally Magazine, May 12 2020

A cross-sectional study to estimate prevalence of periodontal disease in a population of dogs in commercial breeding facilities in Indiana and Illinois, Judith L Stella et al, PLOS One, Jan 18 2018