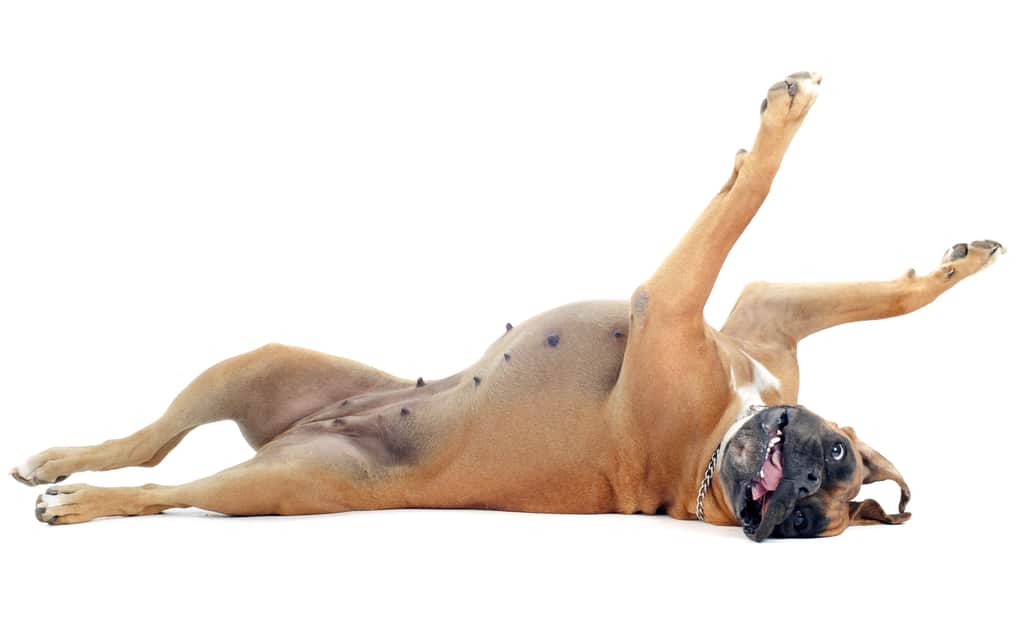 It’s hard to imagine a breed with a bigger personality or a sweeter temperament than the Boxer.

Boxers are imbued with a very distinctive set of qualities that add up to an unforgettable dog.

A Boxer is a bolt of sunshine into every home .. but these are not what you would call low maintenance dogs.

Did you ever meet a dog with a sense of humor?

Boxers love to amuse themselves — and others.

They play for laughs.

They’re so successful in this pursuit that it’s easy to mistake them for lovable buffoons.

But that is to massively underestimate the Boxer.

Boxers are much more than the class clown.

They are athletes, sure.

But they are also observers and thinkers.

They are sensitive souls.

And they are fearless.

Boxers embody so many appealing qualities that it’s easy to see why they rate among the most popular breeds in the United States, year after year.

As one of the oldest known breeds on earth, the Boxer has long attracted admirers from every walk of life. From hunters and soldiers to circus performers and families with young children.

The Boxer charm is irresistible.

It’s not uncommon for a Boxer owner to swear off other breeds for life.

So full of character is the Boxer, that a regular dog can become colorless in comparison.

These character traits are so thoroughly “Boxer” that they are just as distinguishing a feature of the breed as that blocky head, squashed snout and deep chest.

Boxer devotees, perhaps moreso than lovers of any other breed, will recognize their own pets in just about every other Boxer they encounter.

On the con side of the ledger, anyone who knows Boxers loves them in spite of a couple of challenging traits.

First time owners will discover that Boxers have a tendency to be:

But who could begrudge that face a flaw or two?

What A Boxer’s Temperament Means For Training

Being the big softies they are, Boxers will not respond to harsh methods.

Force a Boxer, or reprimand him unfairly, and he will shut down.

Training a Boxer should be a game. Keep it upbeat.

Never hit or use rough corrections with any dog .. but a Boxer will take this kind of treatment particularly hard.

On the other hand, capture a Boxer’s sense of fun and you will have an eager student.

Boxers can be a little slower to catch on than, say, a Border Collie.

And while they like to earn praise, they also have a strong independent streak.

But they will also bring an inimitable Boxer flair to everything they do.

The Zoomies are a classic expression of Boxer exuberance:

Boxers have lively minds, as well as muscular bodies built to leap and run.

They are great learners and thrive when given a job to do.

However, Boxers can get easily bored with repetition, so owners need to stay on their toes to keep their dogs’ attention.

Challenges Posed By The Boxer Temperament

It comes as a surprise for some owners to learn that Boxers are classified as working dogs.

They are not particularly well suited to the sedentary life of the average domestic dog .. relegated to lying on the couch all day, waiting for their owner to come home and give them a quick walk around the block.

Extended periods confined to a crate will not a happy Boxer make.

Nor are Boxers suited to the life of an outside dog. In the heart of the family is where a Boxer belongs.

With hunting dogs figuring prominently in their ancestry, Boxers have a strong prey drive and are keenly scent-driven.

An owner would do well to provide constructive outlets for these instincts.

“Nosework” games that harness the natural desire to sniff out a target are fantastic for Boxers, engaging body and mind.

Tugs and frisbee toys channel the urge to catch and chase.

The Boxer’s excitability and love of people can manifest as jumping up on people, particularly strangers.

Given their size and power, this is a behavior that needs to be stamped out with training.

This is the main risk that Boxers pose around youngsters or anyone unstable on their feet .. although the dogs often display a natural awareness of vulnerability.

Boxers are famously gentle and long suffering with children and have an obvious love of babies.

See also: How To Stop A Boxer Jumping On People

Constant pulling on the leash is a common complaint of Boxer owners.

Absolute consistency and practice is the key in teaching a Boxer to walk calmly on a loose leash. You have to be more stubborn than your Boxer.

Like jumping on people, pulling on the leash comes down to a lack of impulse control.

This is a skill which can be developed.

See also: How To Stop A Boxer Pulling On The Leash

Recall When Off Leash Walking

A Boxer in full flight is a joy to see.

But that joy can quickly turn to terror when your out-of-control dog is hurtling towards traffic, totally disregarding your exhortations to “Come!”

Controlled off leash walking and a rock solid recall are essential to keeping your Boxer safe, while giving him the freedom to explore.

Be sure to “proof” your “Come” command once you think you’ve taught it, by testing it in the face of gradually more enticing distractions.

Your Boxer hasn’t mastered the command until you know he will listen in all situations.

A long line is your friend during this process, which will take time.

Group classes can be a worthwhile place to practice obedience while in close proximity to other dogs.

What A Boxer’s Temperament Means For Daily Life

First of all, you will be laughing a lot.

You will also want to be committed to being an active and involved dog owner, not just someone who happens to have a dog.

Your life may well come to revolve around your Boxer, by choice.

But even if it doesn’t, your Boxer’s basic needs will have to be met, for his sake and for your own sanity.

Physical exercise needs to involve a variety of:

Factor into your dog’s daily routine plenty of mental stimulation and physical exercise.

This requires more than your two Boxers playing with each other throughout the day.

Your Boxer craves interaction with you.

You can provide mental stimulation by:

It doesn’t take a huge amount of time.

Five minutes here and there will make a huge difference to your Boxer’s mental health.

Another thing that makes a huge difference not only to your Boxer’s physical health but to his general headspace is:

If allowed to become bored, lonely or understimulated (mentally or physically), the energy and enthusiasm of a Boxer can morph into distress and present as undesirable behaviors such as:

If there’s poor leadership on the part of the owner —  particularly combined with not enough exercise and mental stimulation — a Boxer can even display:

If there’s any inconsistency in the rules, a Boxer will find the loopholes and exploit them.

If there’s a vacuum at the top, and no alpha dog (that’s your role as owner), a Boxer is more than happy to step up and take control.

This can manifest as insecurity, a vying for dominance, and fights with other dogs in the household.

A happy, secure Boxer is one that knows his leader has things under control.

Once he knows that’s the case, he can relax into the role of a good follower dog.

Take care of your Boxer’s needs and you will have the best dog you’ve ever known.

Are All Boxer Dogs Hyper?

This should tell you all you need to know about whether the breed is inherently hyper.

To the contrary, Boxers are known for their steady temperaments and highly trainable natures.

As with any dog, the behaviors an individual displays will reflect certain breed characteristics and basic temperament.

And Boxers are slow to mature, not considered out of puppyhood until they’re three years old.

But your dog’s behavior is very much a function of his environment and training.

Sure, every Boxer loves to cut loose and go silly to blow off steam.

But they can learn a time and a place.

They can be taught to have an off-switch.

In other words, whether or not your Boxer is hyperactive is up to you.

Other often-overlooked practices that can predispose a Boxer to over-excitability and behavioral problems include:

See also: When Should I Neuter My Boxer?

Boxers are a delightful family dog, fun loving and without a mean bone in their bodies.

However they do have a history as a working dog with strong in-built drives as a result of the tasks for which they were originally bred … tasks that include guarding and hunting.

For the Boxer temperament to shine, be sure to provide your dog with lots of positive outlets for their energy, both mental and physical.