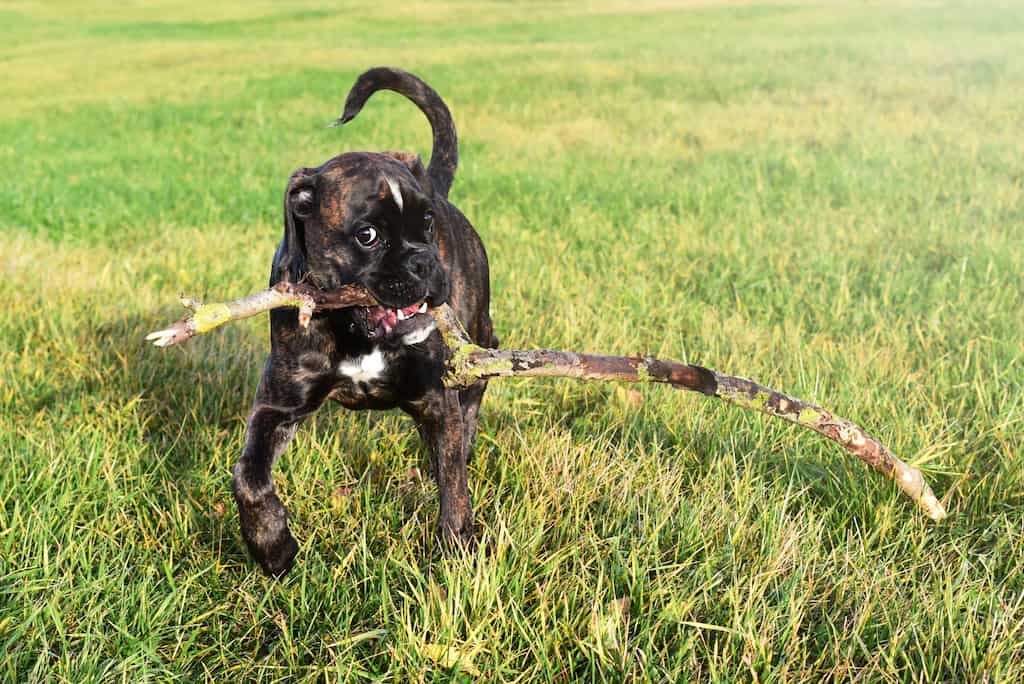 Boxer dog traits can be simultaneously endearing and challenging.

Before deciding a Boxer is the right breed for you, it’s worth understanding the full range of Boxer dog traits, so you know what to expect from your puppy’s temperament.

This article will tackle the most common questions prospective owners have about the temperament of the Boxer breed as well as provide some answers to questions you maybe didn’t know you had, but should get your head around before welcoming a Boxer into your life.

Boxers figure among the most popular breeds in America year after year because they have a heap of appealing qualities.

The winning Boxer personality is remarkably consistent from dog to dog within the breed, so you can predict with some reliability what your dog is going to be like.

Here is a list of typical Boxer dog traits that owners love.

The thing about Boxers is that many of their good points can quickly become bad points, if their considerable needs aren’t met.

For instance, a Boxer’s intelligence and inquisitiveness can be a double-edged sword.

On the plus side, it makes for a highly trainable dog (though not necessarily an easy-to-train dog).

However, it also means your Boxer needs a lot of stimulation, and can easily become bored.

If you fail to provide constructive outlets for your Boxer’s mental energy, you can be certain he’ll find ways to entertain himself …and they may not align with your idea of appropriate behavior.

This is where owners start to see problem behaviors like destroyed beds, digging and even nuisance barking, which is generally uncharacteristic for a contented Boxer.

Plenty of attention and exercise, yes.

But a Boxer also needs to work his mind.

A few ways you can do this include:

Whenever you truly know a person, or a dog, you become intimately familiar with not just their good qualities, but their less appealing attributes — and Boxers have their share.

It does neither dog nor would-be owner any favors to paint a partial picture that leaves out the things that can make Boxers difficult at times.

Anyone who has been owned by a Boxer will recognize this compilation of less desirable aspects of the Boxer temperament.

Boxer dogs can be:

Of course, as with every dog, the biggest influence is training and how your Boxer is raised, and managed.

Your traits as an owner will be reflected back at you in your Boxer.

Successful Boxer dog ownership is as much a question of whether YOU are right for a Boxer, as whether a Boxer is right for you.

Boxers can be a handful for first-time dog owners.

Here is a guide to reading your Boxer’s body language.

The key to all good relationships is compatibility.

Think seriously about what kind of behaviors you expect from your dog, and what kind of lifestyle you want to lead.

Boxers thrive in the care of owners who are:

How Boxers Are Different To Other Breeds

Boxers may surprise you if you’re used to other breeds.

Here are a few examples.

While Boxers can run forever and love to zoom around wide open spaces (they have zoomies like you’ve never seen), they can tend to be less task-focused than other dogs.

Your Boxer may love chasing after a ball and there’s a chance he’ll bring it back to you some of the time.

But there’s also a fair likelihood he’ll invent his own game of running off with the ball, preferring to be chased and to chase, than simply playing fetch.

Their in-your-face, “boxing” style with liberal use of paws and quite a bit of “mouthiness” can rub some dogs the wrong way.

It takes another Boxer to truly understand a Boxer.

Your Boxer is going to embarrass you at obedience school, be prepared.

Reliable recalls and walking on leash without pulling are the two skills that tend to be the most difficult for Boxers to master, on account of their exuberance.

This moderates somewhat with maturity, but don’t rely on ageing as a strategy — bad behavior that persists into adulthood can also become ingrained habit and hard to break.

You may need to work up to calm, obedient behavior in social situations incrementally.

Practice in closer and closer proximity to people and other dogs or situations that your Boxer finds stimulating.

The idea is to manage your Boxer’s excitement levels so that he can still concentrate on you above distractions.

You won’t be able to get much sense or good behavior out of an “overthreshold” Boxer, so wind back the degree of difficulty and begin again.

While Boxers can take a little more time to learn new skills than some other breeds, they often end up acing it in the end.

So, stick with it!

Boxers are so sweet-natured that it’s easy to forget they are descended from fighting and hunting dogs.

They also have a strong prey drive, which means they have to overrule in-built instinct to resist chasing small, furry, fast-moving things.

Boxers will be good with cats and other animals if they’ve been brought up with them, but otherwise will require some teaching.

The breed also has a keen sense of smell and can be very scent-driven.

While mental focus is perhaps more developed in European lines of Boxers, compared to American Boxers, this is a working breed employed throughout the world as police dogs, search and rescue dogs and seeing eye dogs.

Even in pet homes, Boxers enjoy having jobs to do and can tend to behave better when given some level of responsibility and room to show initiative, as opposed to being kept under very tight control which can be a little crushing to their playful spirits.

The trick is allowing this level of freedom while keeping your Boxer safe.

Crating and Boxers doesn’t always mix — you may find it a happier arrangement for everyone to dog proof your home so your Boxer can safely have the run of the house.

Boxers as a breed are sometimes lumbered with a reputation of being sickly, short-lived “cancer factories”.

While too many Boxers do suffer from health problems, this invariably occurs in dogs that are subject to a sorry combination of practices that have become a normalized part of dog ownership but which are in fact disease-producing in any dog.

Factors that contribute to ill-health in Boxers include:

Health problems seen in Boxers as a result of the abovementioned mistakes in basic care include:

The good news is you can avoid all these problems with proper care and feeding.

If the Boxer personality and your own are a good match, you will find no better companion.

Boxer ownership requires some thought and commitment, but when done right you will be able to bring out your Boxer’s best traits and minimize his weaknesses.

One thing’s for sure, you will never meet another dog like the Boxer.