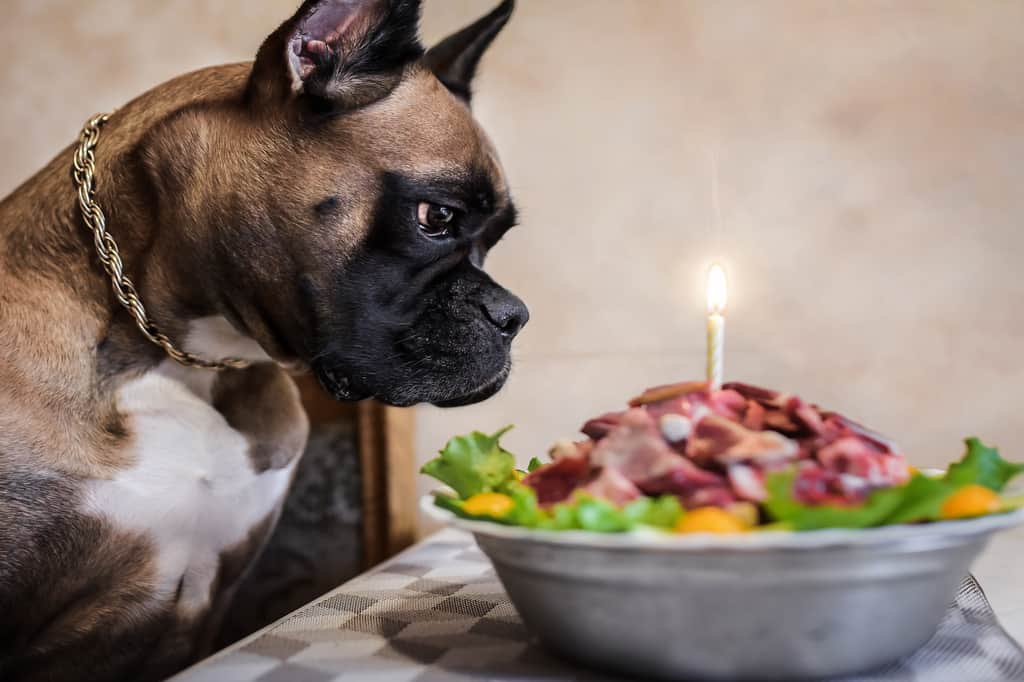 There is nothing wrong with giving your Boxer treats, just make sure they are species appropriate foods.

The problem with store bought treats is they’re full of preservatives and tend to contain low quality ingredients that are not good for your Boxer’s health.

As well considering which treats you give, it pays to be deliberate in choosing how and when your dog receives them.

We are reader supported. I may earn a small commission, at no extra cost to you, if you buy via links I share. I am not a vet. This post is for general informational and educational purposes only. I encourage readers to see my full disclaimer here.

Indiscriminately spoiling your Boxer won’t achieve much and can even sabotage his training if he learns he receives rewards regardless of how he behaves.

On the other hand, food rewards given strategically can be a powerful way to encourage good behavior as part of positive reinforcement training.

Treats Your Boxer Should Never Eat

It defeats the purpose of giving your Boxer a treat if you undermine his health in the process.

Unfortunately, many commonly fed treats are less than healthy.

Packaged treats often contain ingredients that you would never put in your dog’s bowl, and are frequently treated with artificial colorings and flavorings and kept shelf stable with preservatives.

Rawhide is a product of the leather industry that is drenched in chemicals and highly indigestible, posing a risk of both choking and intestinal blockage.

Having your Boxer lick your ice cream cone might provide an instagram-able moment but it doesn’t serve your dog.

Steer clear of sausage and other processed meats too. These are cooked and therefore biologically inappropriate food for dogs. They’re also treated with preservatives your dog is far better off without.

While there are worse things than cheese, it’s not a natural food for dogs.

Luckily, there are plenty of healthy treat options that your Boxer will probably like much better, and work much harder for, than anything you could find at the pet store.

Great training treats for Boxers include:

Fruit forms part of a wild dog’s diet — wolves graze on berries when prey is scarce.

Boxer dogs can eat, and generally love, fruits including:

If you’re in need of a chew treat for your Boxer, consider:

Managing raw meat as treats can be a little messy. Don’t let it deter you.

A quality dog treat pouch is the answer.

This Silicone Dog Treat Pouch is food safe and cleans easily with a quick rinse in water.

Strap one on your waist and pair it with a Clicker and you’re good to go.

How To Use Treats To Train Your Boxer

If you give your Boxer treats “just because”, you forfeit the opportunity to teach him something in the process.

To raise a well mannered Boxer, have him earn everything — including treats.

Dog trainer Susan Garrett — who wrote Ruff Love: A Relationship Building Program for You and Your Dog — calls this the “nothing for free” principle.

The clearest example is having your dog sit before you put his dinner on the floor.

With treats, always require something of your dog first, even if it’s just a paw shake or a sit.

By doing this you cultivate the opposite of a sense of entitlement.

Rather, your dog learns that certain behaviors are expected of him. He learns to associate an action on his part with a pleasant outcome.

It’s one small way to constantly reinforce to your dog his place in the household: you’re the boss but if he plays by your rules, good things come his way.

A Boxer that knows where he fits in the hierarchy is a secure and relaxed Boxer.

He doesn’t have to worry about vying for dominance because he accepts you’re the leader and understands his role is to be a good follower dog.

Dogs do what they can get away with, and what works.

Being a good dog “works” if it gets you a yummy treat.

Treats As Reward For Desirable Behaviors

By rewarding good behavior and practicing often, you will condition that behavior in your dog so that it happens with or without treats.

Your dog’s mind works like a calculator: if doing something gets him a tasty morsel, he will repeat the move and even begin to offer it without prompting, in hopes of earning a treat.

Help your dog learn by providing him with incentives.

If your Boxer isn’t excited about the training treats you’re offering, try something else.

The key is to find a treat that your dog regards as “high value”.

This will change based on the situation and as your dog’s preferences shift or the novelty value of a particular food wears off. You will have to change it up to stay a step ahead of your Boxer.

Blueberries might provide sufficient motivation when you’re playing a “find it” game in the house, but if you’re working on your recall or “Come” command in a high distraction environment, you will probably need to upgrade to raw meat.

Pay attention to your dog’s favorites.

The treat needs to be more interesting to your dog than the distraction, and something he wants badly enough that he’s willing to work for it.

One way to keep a treat “special” is to not offer it too often.

You can make a “lucky dip” mixture of high and low value treats so your dog never knows what he’s getting next.

You can also “jackpot” rewards, delivering two or three, rapid fire, when your dog has performed a particularly difficult task.

Once a behavior is well on its way to being trained, and your dog understands what you want him to do, you can begin not treating every time he does the behavior.

This makes use of the “intermittent reinforcement” technique where rewards are randomized rather than reliably administered every time a desired behavior is performed.

Intermittent reinforcement is more effective in training a behavior than continuous reinforcement, where the behavior always triggers the reward.

When Not To Give Treats To Your Dog

Never treat your dog in response to begging, whining or other behaviors you don’t want to encourage.

Otherwise your Boxer is training you … rather than the other way around.

Be careful, too, not to offer a reward until the desired behavior has been delivered.

In other words: don’t have the treat in your hand when you ask for the behavior.

Only present the treat after the behavior’s happened.

This is because a dangled treat is more bribe than reward.

While luring is a valid technique for training certain behaviors, as a rule, bribing can thwart your training.

Your Boxer is smart enough to work out when you have a reward with you and when you don’t, and may well pick and choose when it’s worth his while to obey.

If you only reach for the reward after the behavior, your dog is more likely to do as he’s told every time because he can’t predict if a reward is in the offing or not, but it might be!

Lastly, be sure to have treats constantly on hand so you can take advantage of every training opportunity that arises … and so that you have some leverage to marshal your dog’s attention when high distraction situations arise.

Alternatives To Using Treats To Train Your Boxer

You won’t always need to give food rewards in order for your dog to behave.

Once he’s fully trained, the behaviors become automatic because you have conditioned them so strongly. Your dog will respond to commands almost without thinking.

In the meantime, food might be the most powerful motivator .. but it’s not the only way you can reward your dog.

Boxers in particular are motivated by fun, which allows you to use play as a reward in itself.

Tug toys are great for this, with a mini tug session able to serve as both reward and as a way to build engagement between you and your dog.

Likewise, the release from a “stay” or a “sit” can be its own reward … as your dog gets to unleash his energy after exhibiting self control to perform the desired behavior.

You can pair a “free” command with these moments, so your dog learns that once he performs the stay or the sit, he will have earned the right to cut loose.

Praise can help to reinforce what you’ve trained, but something stronger is usually needed when first establishing a behavior.

How Often Should You Give Your Boxer Treats?

The beauty of giving healthy treats is that there’s no need to feed them sparingly.

Treats can be part of daily life.

If you’re doing a lot of training and your Boxer has any issue with weight, simply deduct the treats from his meal portions.

This way, you’re not feeding any extra but just dispensing his food as treats rather than all at once out of his bowl.

Make sure training treats are cut into small pieces so your dog doesn’t have to stop and chew them, interrupting the flow of his training.

Treats given willy nilly can mess with a dog’s health and training.

Mindfully chosen treats that are strategically given are a different thing altogether.

Treats prepared from fresh, raw whole foods offer nutritional benefits as well as being a fantastic way to teach and motivate your dog.