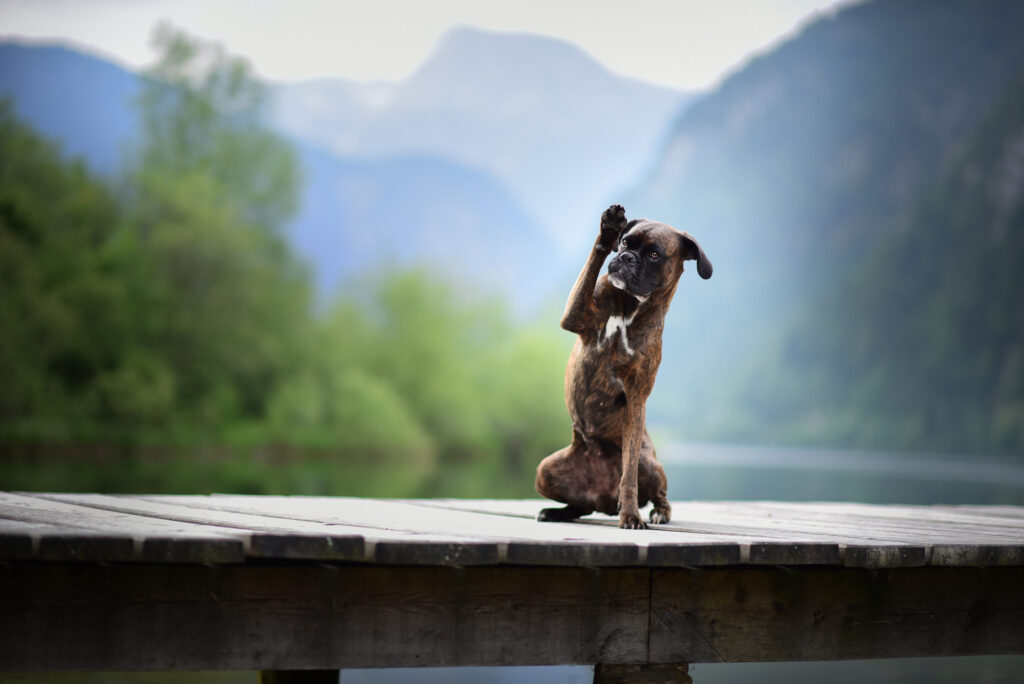 During their development in Germany, Boxers were popular with travelling performers and circus folk because their remarkable intelligence and trainability made it easy to teach them tricks.

No Boxer owner is any doubt that they play for laughs.

Your Boxer probably has a whole repertoire of funny moves all on his own. You can capture those natural behaviors and shape them into specific tricks done on command.

Boxer Dog Diaries is reader powered. I may receive a small commission, at no extra cost to you, if you make a purchase via links I share. Thank you for your support.

How To Teach Boxers Tricks By Shaping And Capturing

Shaping is when you work with a behavior your dog is already offering of his own accord, and slowly make adjustments until you “shape” it into the exact trick you desire.

They can be stubborn if they feel like they’re being forced to do something.

This way, you’re following their lead, harnessing something they are already wanting to do.

“Capturing” a behavior is a similar, related technique.

It involves catching your dog doing something you want to encourage (usually a move that makes up a component of the final trick you are trying to teach) and put a name to it.

This way, your dog learns to associate the move with the command and can then do it on cue.

Here are some tricks that tend to come easily to a Boxer dog.

How Smart Are Boxers?

When your Boxer wants something (usually food) he might raise a paw like he’s trying to get your attention.

When you see this happen, exclaim in an upbeat tone, “Wave!” and reward with a treat.

You can also pair the command with a hand gesture, where you yourself wave.

A further development is to teach the command “Other one” so that he waves first one paw and then the other.

Wave your corresponding hand at the same time.

Once your dog has this trick down, you can have some fun by seeing if he can mirror your waves.

The game here is for him to watch you and then match which paw he uses to wave, so that it corresponds to the hand you’ve used.

Other variations on this trick include “High five” where you can teach him to touch his paw to your palm.

If he knows “Shake” first, then it’s mostly just a matter of taking the motion higher.

This is classic Boxer.

Chances are your pup regularly rests his chin on the coffee table or couch, or anything else at chin height.

Whenever you notice him rest his chin on anything, start saying “Rest your chin” in a pleased tone.

Next, you want to transfer that behavior to your hand.

When he’s resting his chin on something, offer your hand as an alternative.

Hold your hand out flat, palm upwards, at the same level as whatever he’s already resting his chin on and say, “Rest your chin”.

You might get lucky and he takes the invitation and rests his chin on your hand straight away.

If not, take it in steps.

The moment your dog shows any interest or sniffs at your hand, say “Rest your chin” and give him a treat.

Do that for a while.

Then, progress to requiring more: only treat when he actually touches his chin to your hand.

Once he’s consistently doing that, raise the bar a little more, treating only when he rests his chin there a little longer.. and so on.

Ultimately you want him resting his chin solidly on your hand with some weight.

This trick has an ulterior motive.

It can be useful when you need to examine something on your dog’s face but he won’t let you hold his head to do it.

While he’s concentrating on the trick, you can steal a look.

Make sure you pair this command with its opposite, “Quiet”.

Some owners worry by teaching their Boxer to bark on cue, it will encouraging barking at other times.

Actually, teaching a behavior and its opposite — in this case, “Quiet” — is a really effective way to control undesirable behaviors.

How To Stop A Boxer Nuisance Barking

Another example of this tactic is teaching “Paws up” and “Off, for controlling unwanted jumping up on people.

For a variation on Speak, try “Ah-ooo”.

While not barkers, every Boxer owner knows that Boxers are very vocal.

Many of them make a sound that those unfamiliar with the breed might call a growl but which is something more like the sound a wookiee makes.

Guttural, somewhat disgruntled sounding, and full of intent. “Ah-ooo”, I like to call it.

Name the behavior the next time your Boxer does it and then, after a while, build up to asking for an “Ah-ooo” in a situation where he might normally offer it, but before he has.

The only risk with this one is that once your Boxer finds his “Ah-ooo” you may end up with a full-blown Chewbacca on your hands.

There are worse things.

(On a serious note, just teach this command with a “Quiet” as well.)

Instead of shaping and capturing, for this one you use a technique called “luring”.

Let your dog smell that you have a treat inside your closed fist.

With him following the scent with great interest, move your hand around so that you lead him in a tight circle.

As he makes the manoeuvre, say “Spin!” in a bright voice.

Let him have the treat as he completes the turn.

Teach “Other way” as well, so he doesn’t get dizzy when doing a few of these in a row.

You can also teach this one from a heel position, where your pup spins out to the side, starting and finishing in heel.

It can be a fun way to spice up on-leash walking.

Sometimes a Boxer will be in a sitting position and put one paw, and then both paws, onto the side of the bed or couch or whatever you’re sitting on.

His haunches remain in a squat but both paws are up so that his back is vertical to the ground.

Label it as “Beg” when he does this move.

Then, once he’s connected the move with the command, crouch down and hold your forearm out, parallel to the ground. Say, “Beg!”.

Reward gradual movements in the direction of the move and he will get there.

Then, once he knows to put both paws onto your forearm, slowly work on teaching him to balance upright, without your arm for support.

To do this, gently take one of his paws off your arm, but keep the other in place.

Once he’s comfortable with that, then you can start taking off the second paw, but keep holding it so he has help balancing.

Gradually move to him leaning on you less and balancing more.

This move can be good for developing your dog’s core strength but it can also be tough on the back.

Keep practice sessions to a few minutes and ditch this trick if your dog shows any signs of not enjoying it.

Two pieces of equipment come in super handy when training your Boxer to do tricks (and when teaching obedience):

Keep sessions short — two to five minutes is enough. Make sure he’s succeeding more than he’s failing and end on a high note.

Make sure it’s always fun, for both of you.

If you want to spend more time training, introduce extra sessions spread throughout the day, rather than increasing the length of a single session.

Tricks are a fantastic way to exercise your dog’s mind and body, especially on days when you’re stuck inside.

Looking for more to teach your Boxer?

5 Life Skills You Must Teach Your Boxer
Follow Shiva's Adventures