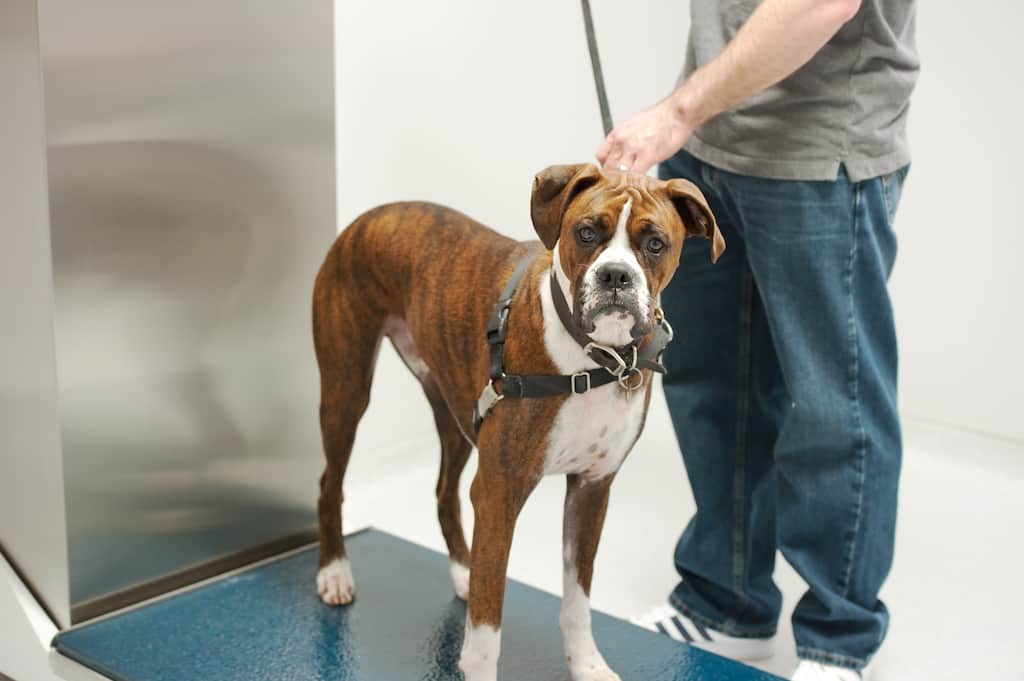 It’s common for owners to worry that their Boxer puppy is too thin or to inadvertently end up with an adult Boxer that’s overweight.

While there is no set weight for a Boxer, males generally weigh more than 66 pounds (30kg), with females typically a little lighter at 55 pounds (25kg) and up.

Bloodlines (European versus American) and neuter/spay status both play a role in determining how much a Boxer weighs.

Whether a Boxer is too heavy or too skinny can also be a matter of perception, with Americans increasingly accustomed to seeing fat dogs.

As a result, there can be a tendency to regard overweight examples of the breed as normal and right-weight Boxers as underfed.

Rather than focussing on weights, it is more useful to look at your Boxer’s appearance in order to judge whether he is at a healthy weight for his frame.

In general, a Boxer’s bone structure should be able to be readily palpated beneath the skin but not seen, the one exception being a hint of ribs which is normal in lean, fit Boxer.

I am not a vet. This post is intended for general informational and educational purposes. I encourage readers to see my full disclaimer here.

What Is The Average Weight Of A Boxer Dog?

There is no set weight required of a Boxer in order to meet the American breed standard.

However, in its offical breed standard, the American Boxer Club lays out no ideal weight range for Boxers.

As a rough guide, the European breed standard says male Boxers should tip the scales at more than 66 pounds (30kg).

At least 55 pounds (25kg) is regarded as the right weight for female Boxers in Europe.

But that doesn’t mean your Boxer should necessarily be that heavy, if he has American bloodlines.

Weight and physique are just two of many subtle differences between American and European Boxers.

Boxers are an old breed with ancestral roots traceable as far back as 2300 BC.

The modern Boxer was originally developed in Germany, with the first ever Boxer club formed in Munich in 1895.

Boxers have consistently ranked among the most popular breeds in the States ever since, and some owners are willing to pay as much as $3500 for an AKC-registered Boxer bred from a champion dog.

What Is A Healthy Weight For A Boxer?

Boxers are lean, athletic dogs and a Boxer in peak condition is a beautiful sight.

You don’t need a set of scales, or a breed standard, to know whether your Boxer is the right weight.

You can tell if your Boxer is a healthy weight for his frame by examining his appearance.

From the side, a healthy-weight Boxer will:

From above, a Boxer that is right weight will:

How To Tell If Your Boxer Is Overweight

Each dog is an individual but as a generalization, an overweight Boxer will not match the above description of an ideal Boxer figure.

Your Boxer is probably carrying too much weight if:

You are not alone — more than half of all American pet dogs are overweight or obese.

But you do need to do something about it.

An overweight Boxer dog is prone to develop health problems including joint problems, diabetes and cancer.

How To Help A Fat Boxer Dog Lose Weight

Getting a Boxer to lose weight is a simple equation: he needs to either exercise more or eat less, probably a bit of both.

If you are feeding kibble, switch to a fresh, natural canine diet and your Boxer will be healthier all round and shed excess pounds.

Kibble is highly processed, suboptimal food for a Boxer dog.

It contains much more fat than a dog’s body is evolutionarily adapted to thrive upon.

It is not profitable for dog food manufacturers to remove it, so they just grind the fat in.

Throughout history, dogs have eaten lean game meats like fawn, which have dramatically less fat than farmed livestock like cattle, sheep and chooks that are deliberately fattened for slaughter.

When raw feeding your Boxer, game meats like venison, rabbit or kangaroo will have appropriate fat content.

However, you will need to trim all visible fat from beef, lamb or chicken in order to restore fat ratios to more natural levels.

If you’re increasing your Boxer’s exercise as part of a weight-loss drive:

How To Tell If Your Boxer Is Too Skinny

We are so used to seeing fat dogs that it’s easy to develop a skewed idea of what’s normal.

Many owners think Boxers are at a healthy weight when they’re actually too heavy.

Equally, lots of us mistakenly perceive right-weight Boxers as too skinny and feed them more in an effort to “fill them out”.

Besides promoting obesity, overfeeding a Boxer puppy can contribute to growth that’s overly rapid, running the risk of developmental disorders including knuckling, where the legs become bowed.

Note that it’s perfectly normal for Boxers to go through a sometimes prolonged skinny phase as they grow and develop.

Many Boxers don’t grow into their height until they’re around three or even four years of age, so give it time.

Your Boxer needs to gain weight if:

Boxers may become underweight as a result of gut damage from the commonly prescribed steroid prednisone, which ravages the body.

Antibiotics are also known to disrupt the gut microbiome.

Malabsorption and weight loss can be the result.

When a Boxer dog is malabsorbed, the digestive tract fails to absorb nutrients properly, meaning the body doesn’t fully assimilate the nutrition in the food that’s consumed.

Feeding a raw meaty bone-based diet is crucial for a malabsorbed Boxer.

Counterintuitively, feeding more is not what a Boxer needs if he’s thin due to malabsoprtion.

This will just create more digestive work for the body, and more waste, without any additional benefit or weight gain.

Fasting and digestive rest are key to healing the gut.

You can read more about how to fast your Boxer in Supercanine: How To Raise A Healthy Dog Or Revitalize A Sick One.

Another often overlooked reason that Boxers can be skinny is detox.

A dog that is detoxing after a course of medication may drop weight and not gain it again for some time.

Part of the reason for this is that toxins are stored by the liver in adipose (fat) tissue and the purging of toxins can be associated with weight loss.

Detox takes energy and replenishing fat stores will be a lesser priority for the body until the work of detox is done.

If your Boxer is genuinely too thin, and not malabsorbed or detoxing after drug treatment, you can help build condition in a healthy way by feeding:

Continue reading about underweight Boxers, including causes of skinniness in Boxers and how not to fatten up a skinny Boxer at How To Put Weight On A Boxer (The Right Way).

What Size Breed Is A Boxer?

Boxers are classified as a medium-sized breed of the American Kennel Club’s working dog group.

However, their muscled physiques and outsize personalities can mean they come across as large dogs — especially when they’ve sprawled themselves luxuriously across the entire expanse of your king-size bed.

Weight-wise, even male Boxers are usually still small enough to be lifted by an adult female of average strength.

Why Is My Boxer So Small?

Boxers come in a variety of shapes and sizes, just like people.

If your Boxer is petite, it’s may well just part of this natural variation between individuals.

If he’s super short and has features that are less than 100 per cent Boxer, there’s a chance he may be a Mini Boxer.

Mini Boxers are not purebred Boxers but the result of a Boxer crossed with a smaller breed, often a Boston Terrier.

However, if your Boxer is definitely purebred but shorter than others you’ve seen, it could be because the tall Boxers were neutered or spayed at a young age while yours remained intact.

Often owners assume neutering/spaying stunts a dog’s growth, but the opposite is the case: desexing artificially prolongs the developmental phase, producing taller dogs.

The widespread practice of neutering/spaying Boxers as puppies means many Boxers are taller than they’re supposed to be.

Read on to find out why this is more than a cosmetic issue.

How Neutering Or Spaying Makes A Boxer Unnaturally Tall

Neutering or spaying while a dog is still a puppy interferes with the closure of the growth plates.

The growth plates are zones of cartilage at the end of long bones, involved in the formation of new bone.

At maturity, hormonal changes cause the plates to harden or close, ending the growth phase and finalizing a dog’s height.

When the hormone-producing ovaries or testes are removed, the balance of hormones is irrevocably disturbed.

The result is delayed closure of the growth plates and an unnaturally long growth phase, producing abnormally tall dogs with distorted anatomical proportions, which can lead to arthritis and other joint problems later on.

As a slow maturing breed, Boxers are not finished developing until around two years of age.

If you must desex your Boxer, don’t even consider it before then.

Why Does Neutering And Spaying Make Boxers Fat?

Removing a Boxer’s hormone-producing sex organs affects not just the dog’s height, but his weight.

Most people know that neutering or spaying can make a dog fat.

A recent Danish study found neutered male dogs are three times as likely as intact ones to be heavy or obese.

But why does this happen?

When a male dog is neutered, the testes are removed.

The testes not only make sperm, they are testosterone factories.

In females, spaying usually removes both the uterus and the ovaries, which make estrogen and progesterone.

The drop in circulating sex hormones after desexing has a variety of effects on a dog’s physiology, including an increased tendency to become overweight.

Though all the mechanisms responsible for this are not perfectly understood, it’s thought that neutered/spayed dogs are:

All of which is a recipe for weight gain unless owners adjust the diet accordingly.

Excess weight and obesity post neutering/spaying seems to arise regardless of the age at which a dog undergoes the procedure.

In fact, neutering/spaying is known to increase the incidence of a range of diseases including incontinence, osteoarthritis and some cancers including mast cell tumors.

A Boxer’s weight is less important than his overall form and proportions.

A Boxer’s weight and height is affected by neutering/spaying due to the involvement of hormones in regulating growth, and whole-body health.

If you’re wondering if your Boxer is too thin or too fat, you needn’t reach for the scales.

Instead, take a good look at your Boxer from the side, and from above.

Your Boxer is at an appropriate weight if he has a discernible taper at the waist and a suggestion of one or two ribs.

A Boxer that is a barrel, rather than an hourglass, when viewed from above, would almost certainly be healthier if he lost a few pounds.

Neutering increases the risk of obesity in male dogs but not in bitches — A cross-sectional study of dog and owner-related risk factors for obesity in Danish companion dogs, Preventive Veterinary Medicine, 2019

Clark, Jayne, BVSc, MRCVS, To castrate or not to castrate? Veterinary Practice from Improve International, 2019